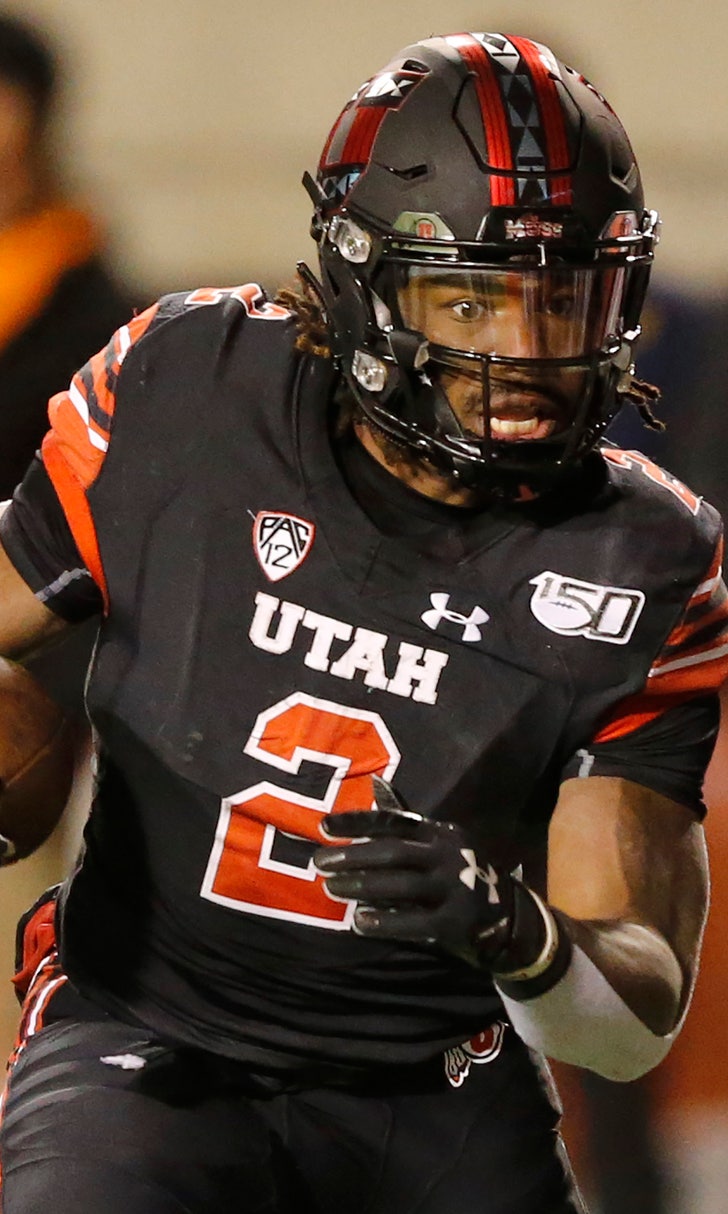 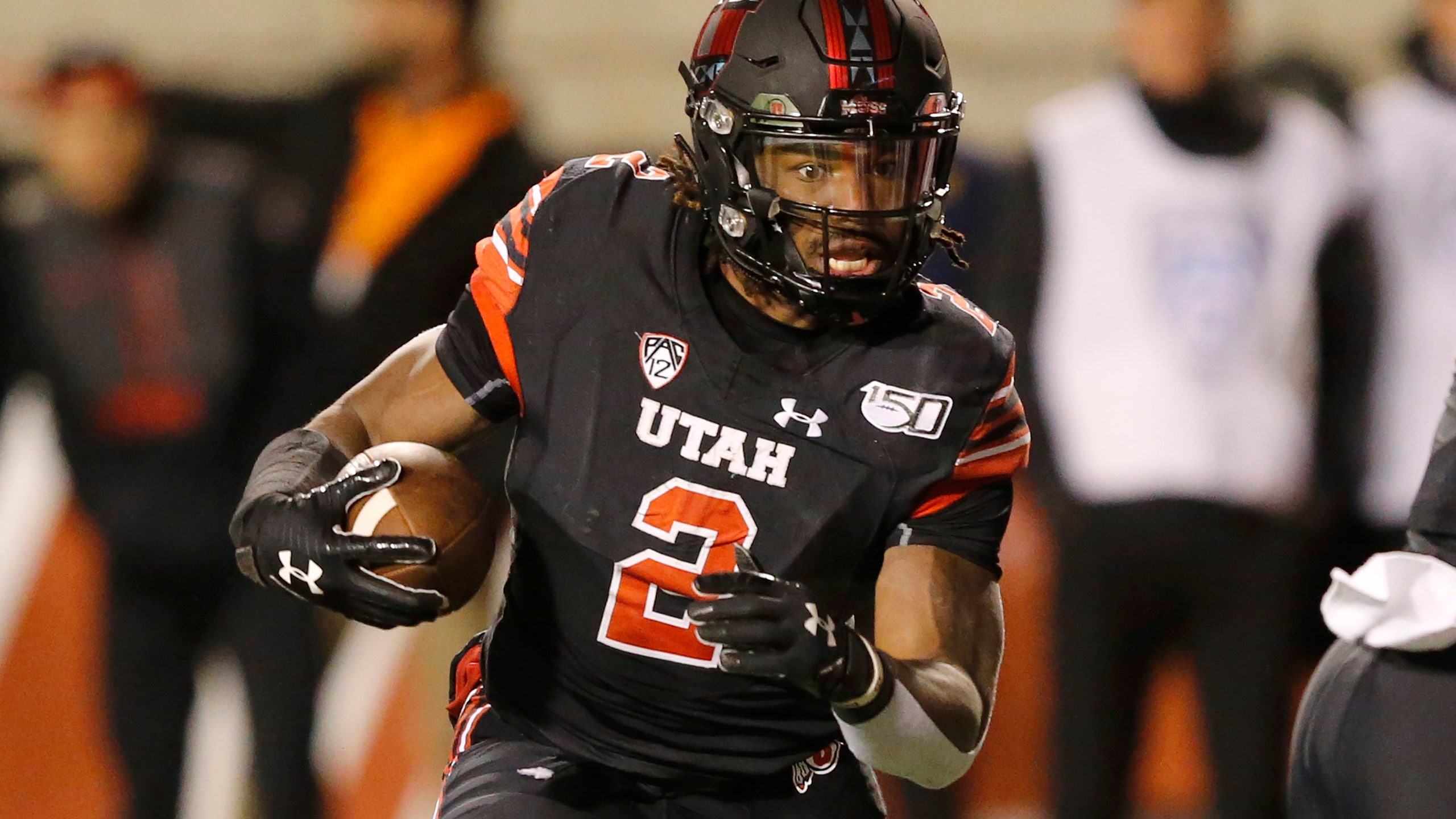 SALT LAKE CITY (AP) — No one knew for sure if an ailing Tyler Huntley was going to play for No. 12 Utah until pregame warmups.

Seeing the quarterback's determination inspired Zack Moss and the rest of the Utes to a record-setting performance Saturday night in their 35-0 rout of California.

Huntley, who has a lower left leg injury, limped around the field but never wavered in his promise to play earlier in the week.

"He was pretty dicey all week long. You could see he wasn't 100 percent," Utah coach Kyle Whittingham said, noting the coaching staff game-planned with Huntley's lack of mobility in mind.

"It makes you want to go harder," Moss said. "I mean, the guy's a warrior. . He worked so hard to get ready to play in this game."

After becoming Utah's career leader in yards rushing last week, Moss increased his total to 33 touchdowns on the ground and surpassed Del Rodgers, who set the previous mark of 31 from 1978-81. Moss also reached 100 yards rushing for the 15th time, breaking the school record he had shared with Devontae Booker and John White IV.

"It all feels really good, especially when it comes with winning," said Moss, who also finished with 89 yards on three receptions.

California's defense had held 14 consecutive opponents under 25 points, the longest active streak in the country.

"This was crushing. There's nothing worse. It makes you want to throw up," California coach Justin Wilcox said.

Huntley threw for 214 yards and a touchdown on 11-for-17 passing before sitting out the second half.

"The offensive line was more determined to protect him and keep the hits off him," Whittingham said. "His toughness rubbed off on the rest of the team."

As the Bears defense crumbled, the Utes just added to their impressive run of suffocating performances.

"We know what we're after," said Terrell Burgess, who led the team with six tackles. "We're just trying to make sure we make this season special."

Utah has allowed only 10 points in the last 14 quarters, and the lone touchdown was a last-minute score in the 52-7 win over Oregon State two weeks ago.

"We take a lot of pride as a defensive line and want to be the best. We dominated the line of scrimmage up front," said Leki Fotu, who had a sack and was frequently in Cal's backfield.

The Bears have lost four in a row after starting 4-0 and reaching No. 15 in The Associated Press poll.

In his first start, freshman quarterback Spencer Brasch was under constant harassment and completed seven of 19 passes for 47 yards. Regular starter Chase Garbers and backup Devon Modster were both injured.

"They had great coverage and their front is phenomenal. They are so solid all the way around. They just beat us up and down the field," Brasch said.

Jason Shelley hit Brant Kuithe on a 1-yard pass and scored on a 1-yard run to give Utah a 28-0 lead at halftime.

After a first-possession punt, it took a broken play to get the Utah offense loose on its next drive — the first of five consecutive touchdowns. Huntley dropped an early shotgun snap but picked up the ball and wheeled around on his sore left leg to find Moss wide open. The running back took the pass 69 yards before Jaylinn Hawkins pushed him out of bounds at the 6-yard line. Moss took it in two plays later for his 32nd career rushing touchdown.

On Utah's second straight drive of more than 90 yards, Huntley lofted a 40-yard touchdown pass to Bryan Thompson, who had raced behind the defense and caught the ball in stride.

According to Moss, ball control set the tone.

"When we are able to run the ball like that and keep those guys fresh on defense, it puts them in a position to play lights out. I don't think they even got off 45 snaps tonight," Moss said.

California had 43 plays on offense, which ranks third in Utah history for fewest by an opponent.

It was the first time the Utes shut out a conference opponent since joining the Pac-12 in 2011. Their last league shutout was a 50-0 romp over Wyoming in 2007. The last time the Bears failed to score was a 45-0 loss to Nebraska 20 years ago.

With several teams ahead of Utah losing Saturday, the Utes might find themselves in the top 10.

California: The Bears knew they had a slim chance to win a high-scoring affair with their third-string quarterback, but they didn't expect their defense to struggle almost as much as their anemic offense. California managed just 83 yards of total offense and only crossed midfield once — on its first possession of the game. Evan Weaver, the top tackler in the nation, had 22 stops but many were too far from the line of scrimmage. "We were making them earn everything they got and then we bailed them out on third-and-long with explosive plays," linebacker Kuony Deng said.

Utah: Won its ninth consecutive home game. ... During the five straight touchdown drives, Utah converted six third downs in a row. ... After allowing only 25 yards passing to Arizona State, the Utes defense held the Bears to 60 yards through the air. ... The blowout allowed the Utes to rest their stars, Huntley and Moss, much of the second half for next week's big game at Washington.

California: After a bye week, the Bears host Washington State on Nov. 9.