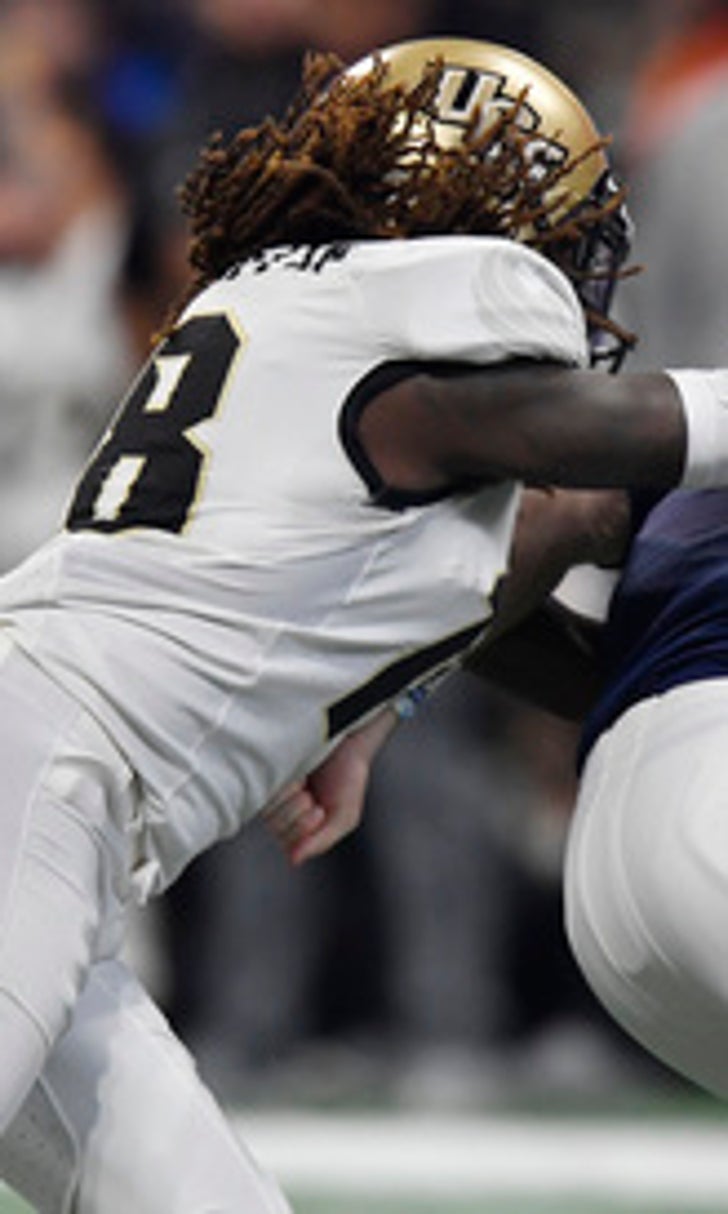 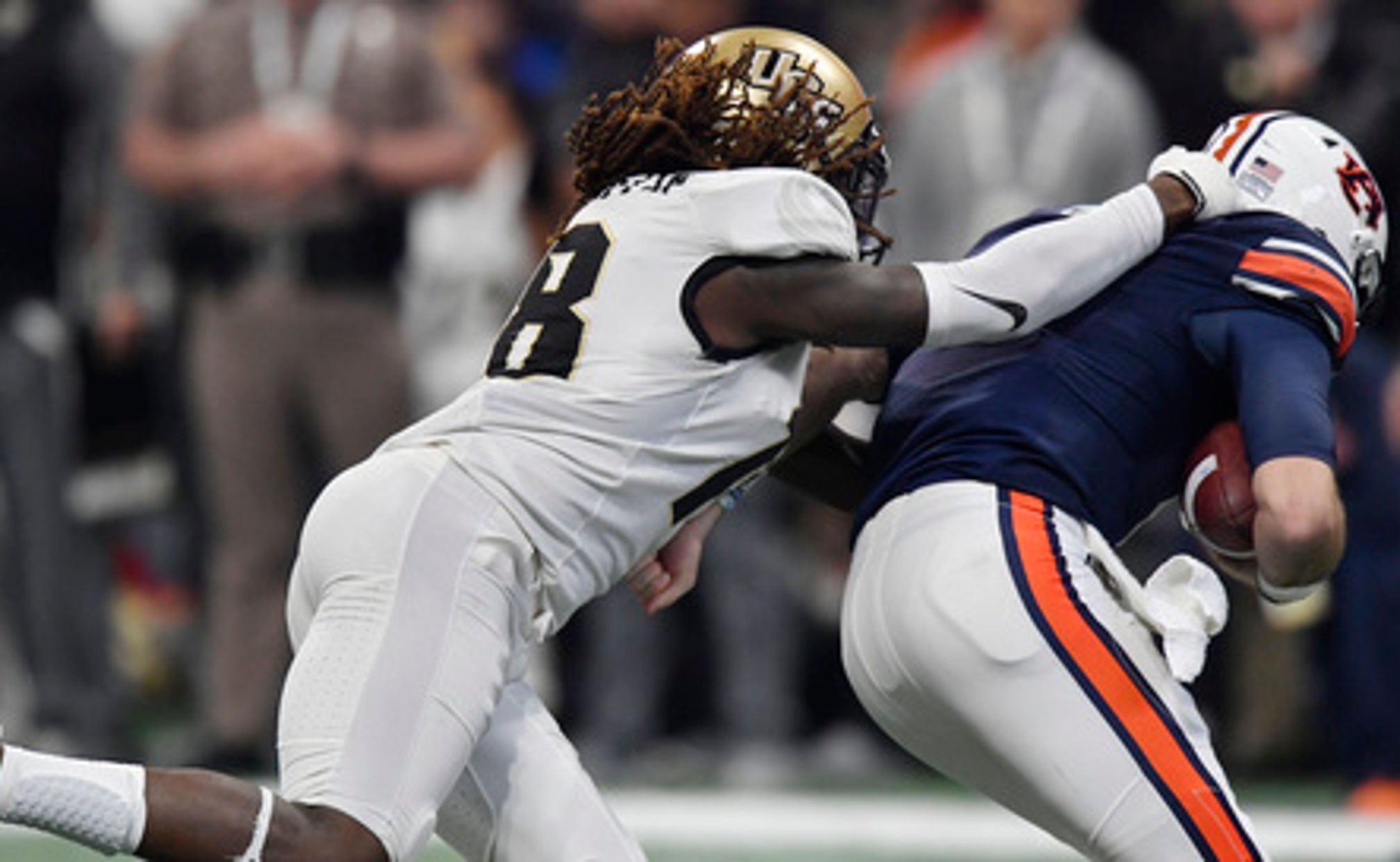 ATLANTA (AP) McKenzie Milton wanted to throw a blanket of 13 wins and no losses over the College Football Playoff.

After Milton and Central Florida capped a perfect season, he suggested it was time to respect the Knights, even if they weren't invited to the playoff.

Milton threw two touchdown passes and ran for 116 yards with another touchdown, leading No. 10 UCF to a 34-27 Peach Bowl win over No. 7 Auburn on Monday.

Then it was time to boast.

''I said on the podium you can go ahead and cancel the playoffs,'' Milton said. ''I'm not changing my mind.''

UCF (13-0) led 34-20 before having to stop a late Auburn comeback. Antwan Collier's interception in the end zone with 24 seconds remaining clinched the win.

The UCF players launched a joyous postgame celebration, rolling around in confetti on the field while wearing T-shirts that read ''Champions.''

The Knights won in their final game with coach Scott Frost, who stayed with the team through the bowl game after accepting an offer to become the new coach at Nebraska , his alma mater. Frost will bring most of his UCF assistants to Nebraska.

''It was the right thing to do to come coach these guys,'' Frost said, holding the game ball. ''I'm not happy for me. I'm so happy for these guys.''

The Knights thought they deserved a higher ranking after winning the American Athletic Conference and leading the nation in scoring. They made a strong statement by beating Auburn (10-4).

Frost said ''it wasn't right'' for UCF to not receive more consideration for the four-team playoff.

''They deserve more credit from the committee than they got,'' he said.

Auburn was held to 90 yards rushing on 44 carries.

''That was probably the main stat that was disappointing for me,'' Tigers coach Gus Malzahn said.

After Auburn took a 20-13 lead in the third quarter on a 4-yard run by Kerryon Johnson, Milton threw a 12-yard touchdown pass to Otis Anderson to tie the game. Milton, under pressure, zipped an 8-yard scoring pass to Dredrick Snelson early in the fourth to give the Knights the lead.

Chequan Burkett's 45-yard interception return for a touchdown pushed the lead to 14 points.

Auburn suffered its second straight loss at Mercedes-Benz Stadium, where it was beaten by Georgia in the Southeastern Conference championship game one month ago.

Johnson, who said he was almost fully recovered from a late-season shoulder injury, ran for 71 yards.

UCF led 13-6 at halftime despite being held under 14 points at the break for the first time this season.

Frost lofted the football-shaped Chick-fil-A Peach Bowl trophy before passing it on to his players. Milton was named offensive MVP. Shaquem Griffin, who had 12 tackles including 1 1/2 sacks, was defensive MVP.

UCF: The Knights passed every test, including on the line of scrimmage, as they proved they could match speed and strength with the Tigers. Milton overcame a slow start after completing only 3 of 17 passes for 30 yards in the first half. He completed 16 of 35 passes for 242 yards with two touchdowns and no interceptions.

Auburn: The Tigers couldn't maintain momentum after opening the second half with two touchdowns for a 20-13 lead. Auburn insisted motivation would not be a problem after the crushing loss in the SEC championship game, but after the game, cornerback Javaris Davis said the Knights ''just wanted it more and they came out and played like it.'' Stidham completed 28 of 43 passes for 331 yards with one touchdown and two interceptions.

UCF: The Knights will begin a new era with coach Josh Heupel , the former Missouri offensive coordinator. Their opening game has not been set, but they will play at North Carolina on Sept. 15.

Auburn: The Tigers will return for their third straight game at Mercedes-Benz Stadium when they play Washington on Sept. 1 to open the 2018 season.