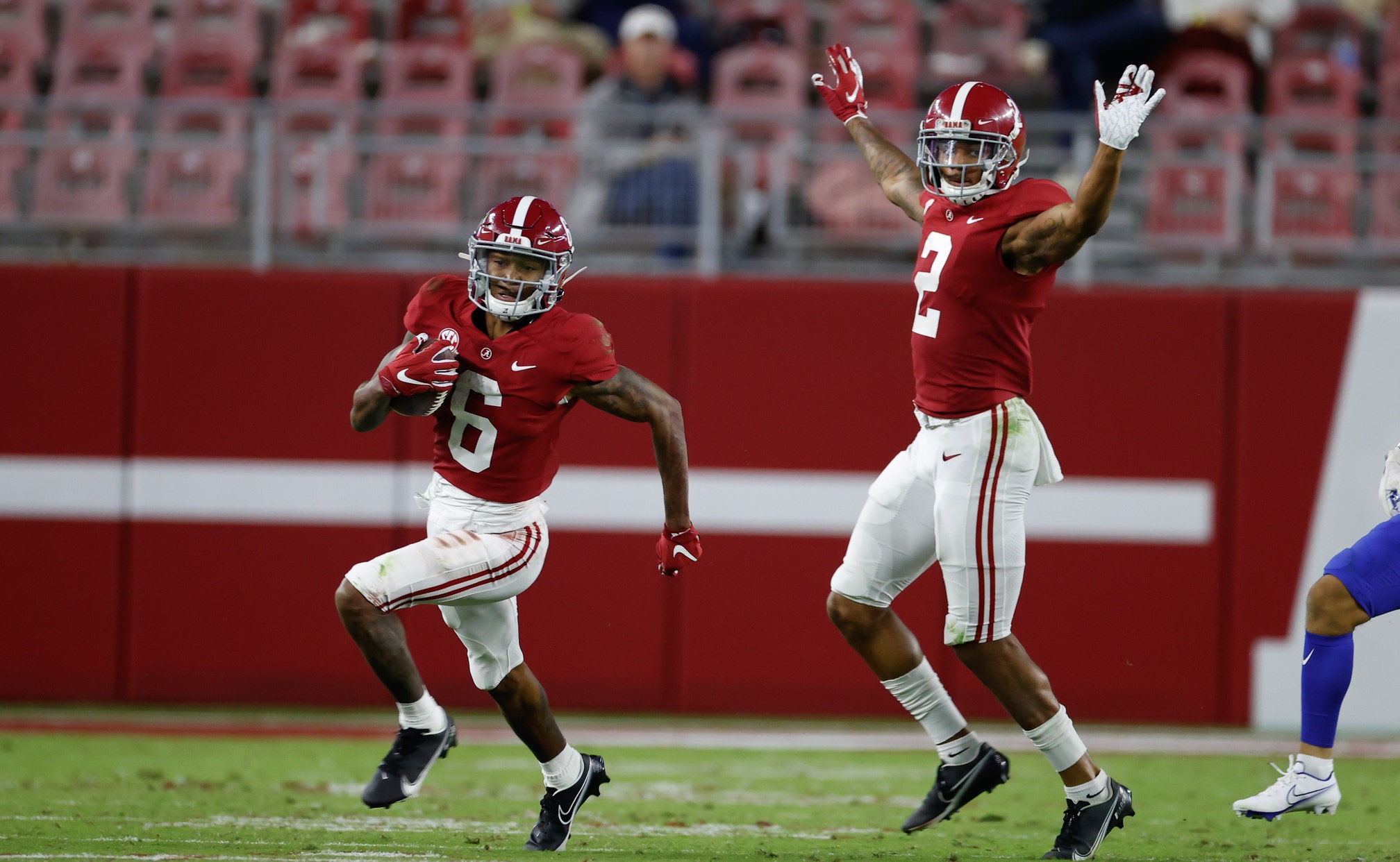 The college football season is heating up, with the playoff picture coming more and more into focus with each passing week.

That holds even truer today, after the first edition of the 2020 College Football Playoff rankings were officially released.

Here are the top six teams in the country according to the playoff committee, alongside their odds to win the national championship (according to FOX Bet), a breakdown of their season to date, and what is on the horizon.

How it's going: For the Crimson Tide, it has been business as usual under Nick Saban so far this season. Alabama has already won both of its SEC showdowns against ranked opponents – Georgia and Texas A&M – by a combined score of 93-48, and the Tide have yet play a game that has been decided by less than 15 points.

What's next: Alabama will enter its annual Iron Bowl matchup with Auburn on Saturday, before closing the regular season at Arkansas. If they get through both of those games, the SEC Championship game awaits.

Key stat: Alabama ranks third in the FBS in scoring offense with 49.4 points per game and Najee Harris leads the country in rushing touchdowns with 16.

How it's going: The Fighting Irish are 8-0, and though they have only played one ranked opponent, that opponent was former No. 1 Clemson (sans Trevor Lawrence), which the Fighting Irish defeated, 47-40, in double overtime.

What's next: Notre Dame still has one big hurdle left to climb in the regular season, traveling to Chapel Hill to face No. 19 North Carolina on Friday. After that, the Irish will host Syracuse and then travel to Wake Forest to close the regular season, with a potential ACC title game matchup with Clemson on the horizon.

Key stat: The Fighting Irish rank fourth in the FBS in rushing defense, allowing only 85.1 rushing yards per game. They also now own the longest active win streak in the FBS with 14 consecutive victories.

How it's going: The Clemson Tigers got off to a fast start this season, winning their first seven games 7-0, including a triumph over then-No. 7 Miami. However, superstar quarterback Trevor Lawrence has since missed time due to COVID-19, and the Tigers fell to Notre Dame with Lawrence on the sideline. Then, this past weekend, Clemson's matchup with Florida State – what would have been Lawrence's return to the field – was postponed due to COVID-19 concerns.

What's next: The Tigers won't see another ranked opponent for the rest of the regular season, with two remaining games against Pittsburgh and at Virginia Tech. If both teams win out, the Tigers will earn a rematch with Notre Dame in the ACC Championship, presumably with Trevor Lawrence in uniform.

Key stat: The Tigers rank in the top 10 in both offensive and defensive efficiency, and are seeking their sixth straight playoff appearance. Their five consecutive appearances in the playoffs is the longest active streak.

How it's going: Four games in, the Buckeyes are 4-0, and got past the toughest test on their schedule to date, knocking off No. 12 Indiana this past weekend, 42-35.

What's next: The Buckeyes have three games remaining against Illinois, Michigan State and Michigan, three teams with a combined record of 5-9 on the season, meaning Ohio State will be heavily favored in each contest.

Key stat: Despite throwing a shocking three interceptions against Indiana, OSU quarterback Justin Fields has been ridiculously efficient this season, leading the FBS in completion percentage at 79.6 percent.

How it's going: The Texas A&M Aggies stand at 6-1 and have played two opponents ranked in the top three at the time of their matchup – Alabama and Florida. The Aggies fell to Alabama, 52-24, but rebounded with a 41-38 win against Florida, and the Texas A&M is now in the middle of a four-game winning streak.

What's next: Three remaining games against LSU, Auburn and Tennessee stand in the way of a potential 9-1 campaign for the Aggies. They will need some help from above to get into the final four, but they are in a good spot should any of the top-ranked teams falter.

Key stat: The Aggies are rolling so far this season, but they only have one win against a team with a winning record this year (Florida).

How it's going: The Florida Gators are 6-1, with their lone loss of the season coming at Texas A&M a few weeks back. Besides that blip, all of the Gators' wins have been by at least 14 points.

What's next: Florida has three remaining games against Kentucky, Tennessee and LSU. If the Gators win out, they will head to the SEC Championship game for the first time since 2016.

Key stat: Kyle Trask has been lighting up opposing defenses all season to the tune of 31 passing touchdowns, the most in the FBS.

Get more from football Add to your favorites to get information about games, news and more.
in this topic

Bills Pick Off Ravens To Advance
A low-scoring first half gave way to one explosive, game-changing play. Here's how Buffalo knocked off Lamar Jackson & Co.
39 mins ago

One More Matchup For The Ages
Tom Brady and Drew Brees have faced countless big occasions before, yet Sunday’s showdown between the Bucs and Saints feels different.
22 hours ago
those were the latest stories
Want to see more?
View All Stories
Fox Sports™ and © 2021 Fox Media LLC and Fox Sports Interactive Media, LLC. All rights reserved. Use of this website (including any and all parts and components) constitutes your acceptance of these Terms of Use and Updated Privacy Policy. Advertising Choices. Do Not Sell my Personal Info