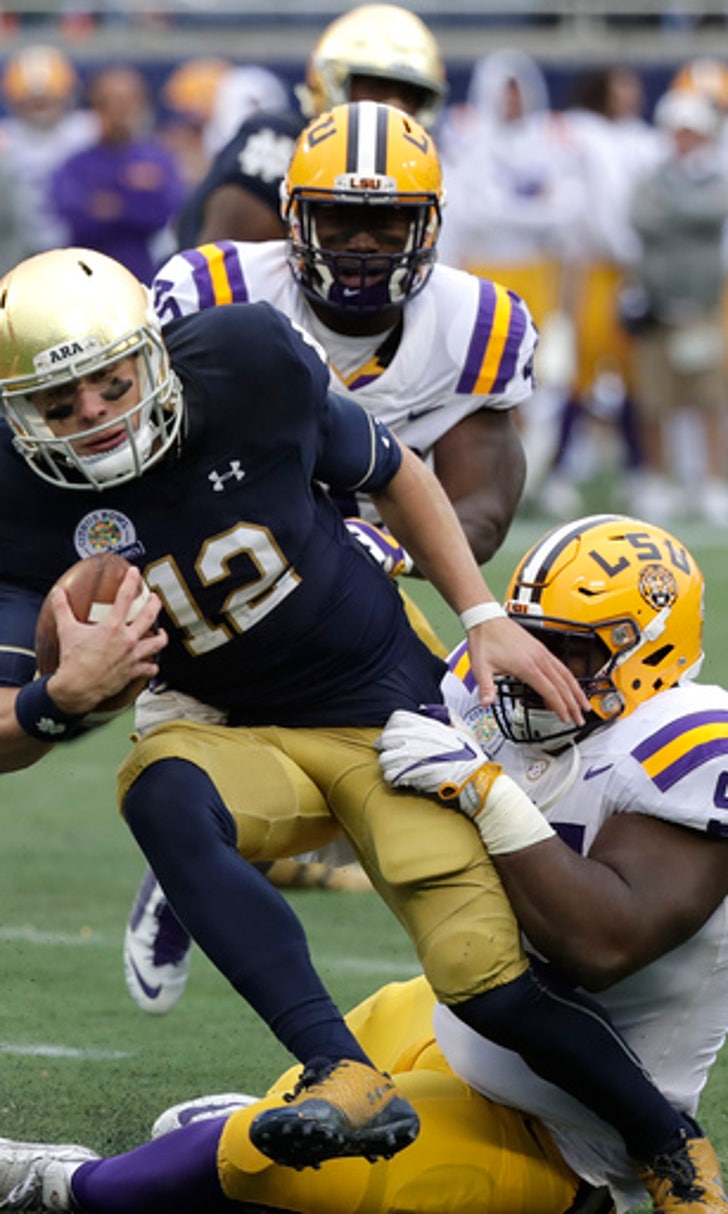 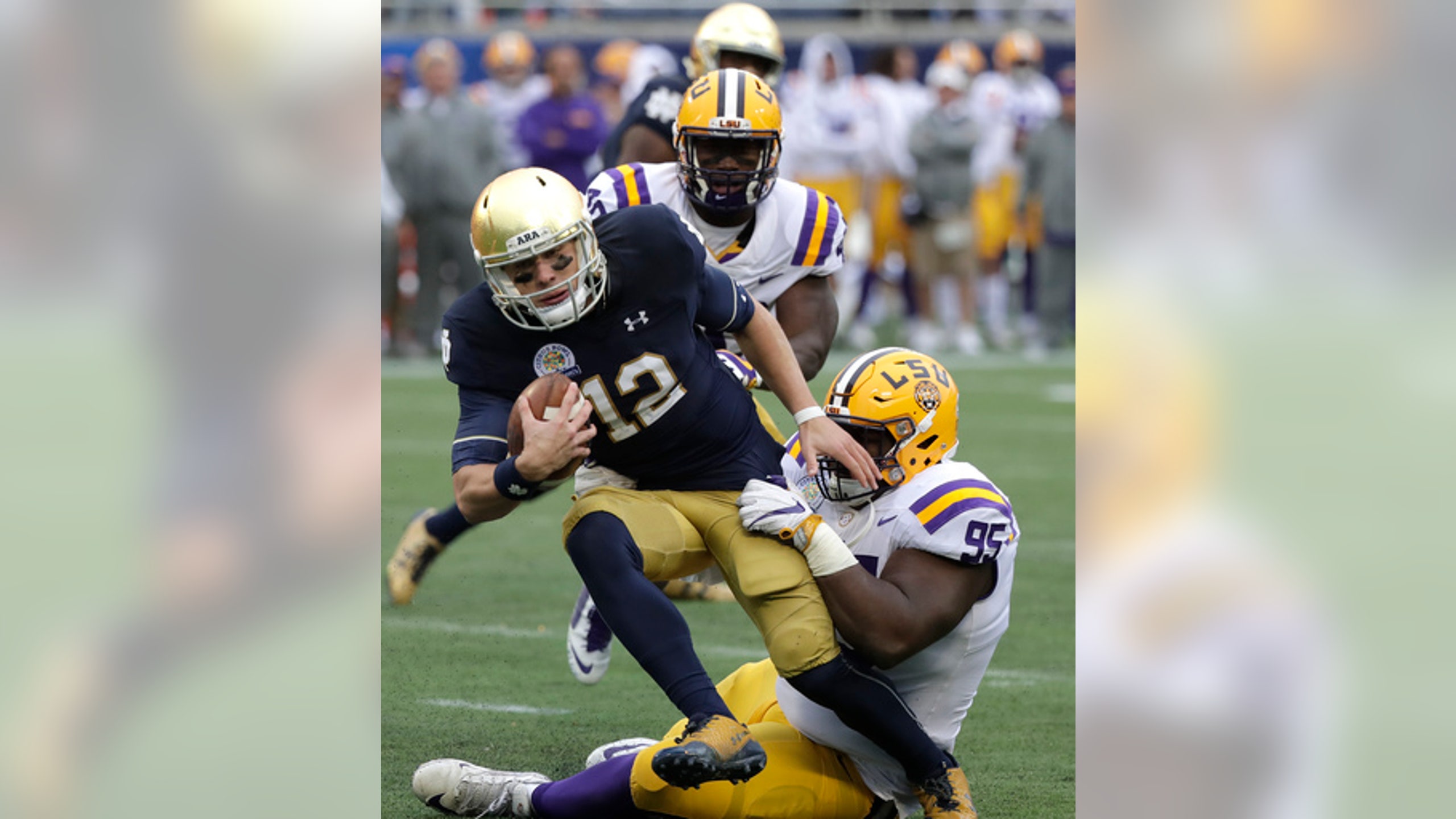 The Fighting Irish's head coach told the junior during a practice leading up to Monday's Citrus Bowl game against LSU that Boykin was going to win the MVP trophy.

Boykin made not only one of the top plays of this bowl season but one of the more memorable catches in Notre Dame bowl history. He made a dynamic one-handed grab and raced down the sideline for a 55-yard touchdown with 1:28 remaining to give the 14th-ranked Fighting Irish a 21-17 victory over No. 16 LSU.

The win by Notre Dame (10-3) is its first in a New Year's Day bowl since the 1994 Cotton Bowl against Texas A&M and snaps a nine-game skid in January postseason games.

''He looked at me like I had two heads. But I felt like he had a chance,'' said Kelly about his prediction. ''He's got the ability, if we could get him the football. And Ian got him the football and Miles made a great individual play and, lo and behold, I've got the MVP sitting next to me.''

Boykin had only nine catches for 151 yards and a TD coming into the game, but he got his first start after starters Chase Claypool (shoulder injury) and Kevin Stephenson (suspension) were ruled out.

Boykin showed off his wide-catch radius on what proved to be the game-winning play. On first-and-10 from the Irish 45, Ian Book lofted a pass up the right sideline that Boykin was able to snag with his right hand at the LSU 33, eluding corner Donte Jackson. Boykin then broke a tackle attempt by Donte Jackson at the LSU 26 before finding a clear path to the end zone.

''Ian put it in place where only I could reach it,'' said Boykin, who finished with three receptions for 102 yards and a touchdown. ''It was a great pass and I was just lucky enough to pull it down on one hand. I've got pretty big hands.''

LSU coach Ed Orgeron said that Boykin made a great grab but lamented his defense's other struggles on the play.

''We had our best cover guy on him (Jackson) but he's a big receiver,'' he said after the Tigers finished the season 9-4. ''We had two guys on him and missed the tackle. That's what I'm mostly disappointed with.''

Book entered the game in the second quarter after Brandon Wimbush struggled moving the offense. The sophomore was 14 of 19 for 164 yards with two touchdowns and an interception.

Book's first touchdown came early in the fourth quarter. With Notre Dame trailing 14-6, he found Michael Young in the back of the end zone for a 6-yard score. Josh Adams then scored on a two-point conversion to tie it.

''It was an awesome opportunity, such a surreal moment that last play with Miles,'' Book said. ''We knew it was going to be a close game. We just had to stay composed and do what we have been doing since January.''

The game lacked drama the first three quarters. It was scoreless until four seconds remained in the first half when a Justin Yoon 46-yard field goal gave Notre Dame a 3-0 halftime lead.

LSU's Danny Etling was 19 of 33 for 229 yards and a pair of second-half touchdowns to Derrius Guice. Guice, who was the MVP of last year's game, had 98 yards on 21 carries.

Notre Dame: Kelly joins Knute Rockne, Ara Parseghian and Lou Holtz as the only Fighting Irish coaches to have three double-digit win seasons at the school.

LSU: Guice, who said after the game that he hasn't made a decision on whether to leave early for the NFL draft, joins Charles Alexander, Dalton Hilliard, Kevin Faulk and Leonard Fournette as the only players in school history to rush for more than 3,000 yards. He has 3,065 yards in 36 games.

The Tigers had it twice on the Irish 1 and managed just three points. In the second quarter they had fourth-and-goal before being called for a false start which resulted in a missed 22-yard field goal by Connor Culp.

In the fourth quarter a Guice 2-yard reception put the Tigers in another fourth-and-goal at the 1. Orgeron decided to go for the 3-point lead and a Jack Gonsoulin 17-yard field goal, which gave the Tigers a 17-14 lead.

''We shot ourselves in the foot too many times,'' Etling said. ''We executed pretty well every possession, but made one or two bad plays, false starts that put us five yards back and all the sudden we're in a tougher situation.''

Adams, who came into the game averaging 115.5 yards per game, was held to 44 yards on 15 carries. In three of the Irish's last four games he was held to under 50 yards.

Notre Dame: The Irish open next season with a home game against Michigan on Sept. 1. During spring practices, Kelly will have to replace three starters on an offensive line that was considered the nation's best.

LSU: The Tigers will have to replace six starters on offense, including Etling and likely Guice, leading into the Sept. 1 opener against Miami in Dallas.