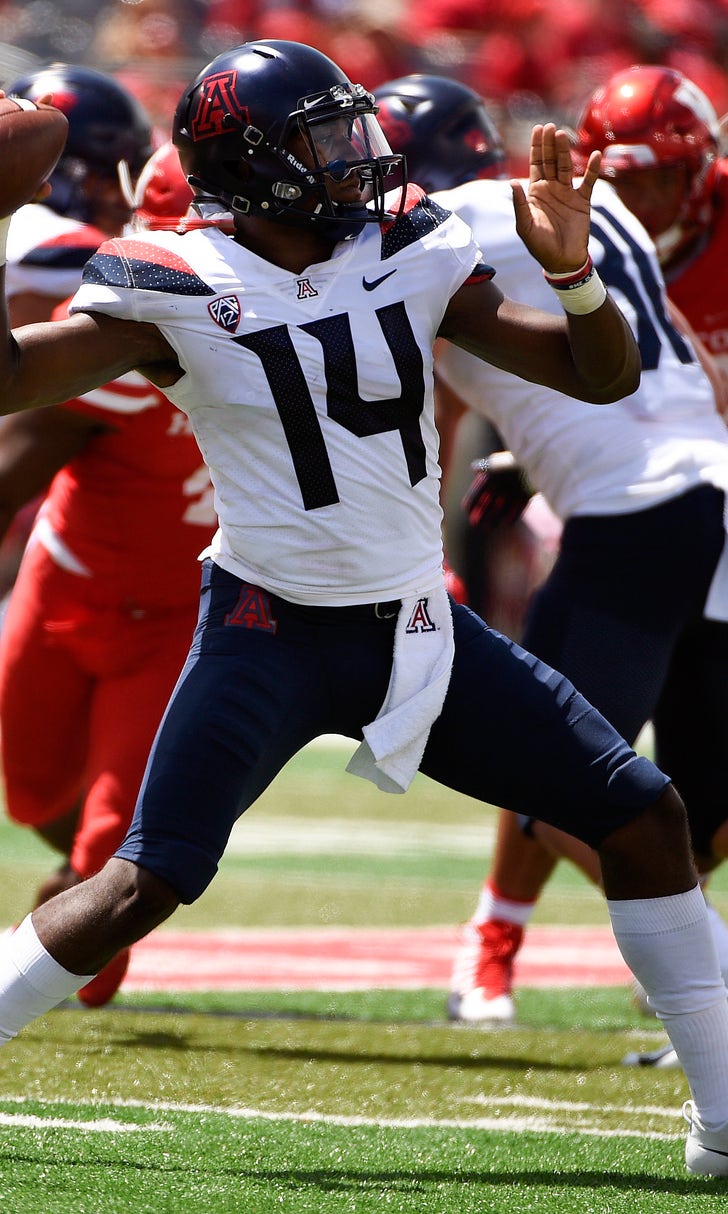 The Kevin Sumlin era in Tucson has gotten off to a rocky start, to say the least.

The Wildcats, a team that some college football pundits thought might contend in the Pac-12 South, are 0-2 and coming off a 45-18 rout at Houston.

Fortunately, for the Wildcats, Arizona appears to have a team it can finally beat Saturday night in FCS foe Southern Utah (0-2), which lost 48-25 at Oregon State last weekend.

The Wildcats are in no position, though, to take anything for granted, especially with the status of quarterback Khalil Tate up in the air. Tate injured an ankle early in the Houston game and lacked the mobility and speed that is his greatest asset. Tate downplayed the injury this week,

"Things happen," he said, "a little tweak, a little bruise."

A lot of bad things have happened to the Wildcats since Sumlin took over for the fired Rich Rodriguez.

"They're inexperienced at some spots," Southern Utah coach Demario Warren said. "You can see them making mistakes where in a couple years they won't be making those errors. But, Kevin Sumlin's one of those coaches that I've always looked up to so I know he'll get it right."

After a 28-23 loss at home to BYU, Arizona fell behind 21-0 in the first quarter at Houston and, with Tate hobbling around, there was no chance for a comeback.

Instead of unleashing Tate's considerable running skills, as Sumlin had promised, the quarterback became a largely immobile passer.

"That happened early in the game, so the game plan changed on the fly," Sumlin said. "The mobility of Khalil is his strength. What we want to do, what we try to do, is play to our players' strength, as we learn this team."

Arizona's stumbling offense, even if Tate is slowed, might get its ground game going against the Thunderbirds. Oregon State freshman Jermar Jefferson rushed for 238 yards and four touchdowns in the victory and praised the wide-open holes his line blew open.

That's something the Wildcats' offensive front has yet to do very often as tackle Layth Friekh returns from a two-game suspension.

"It's a work in progress," Sumlin said of the offensive line. "I think getting Layth back this week will help us."

Here are some things to consider when the Wildcats host the Thunderbirds.

TATE'S STATUS: If Tate's ankle is bothering him, the running game will fall into the hands of others. Tate is a good passer, but his dynamic ability to run is what separates him from others who play the position.

If Tate is healthy, Warren said, look out.

"He's unbelievable," the Southern Utah coach said. "I don't think I've seen somebody that can throw the ball as hard and as far and be as athletic as him. He does some really special things."

WEARY O-LINE: The addition of Friekh will add some depth to the extremely thin Arizona offensive line.

The line was simply gassed after playing so much in the Houston heat and humidity.

"We had four of our offensive linemen play 100 snaps. That's a lot," Sumlin said. "We just don't have a lot of depth there. Those guys couldn't come off the field. They didn't always do the right thing, but they battled."

WHO ARE THE THUNDERBIRDS: Southern Utah is playing its second consecutive Pac-12 foe before beginning play in the Big Sky Conference, where the Thunderbirds are defending champions.

Warren took some solace in the fact that his team did play well after falling behind the Beavers 38-0.

"They believe they're going to win every game, no matter who the competition is," he said, "and the coaches are the same way so I know I've got a bunch of competitive guys around me that want to win."

TAYLOR'S CHANCE: After the performance of Oregon State's Jefferson — who entered the game as a backup — Southern Utah might present a breakout opportunity for Arizona's J.J. Taylor.

Taylor, who has breakaway speed, needed 18 carries to reach 54 yards rushing against the Cougars last week.

AIR THUNDERBIRD: Southern Utah has done most of its damage through the air.

Against North Alabama and Oregon State, Junior Chris Helbig has completed 59 of 86 passes (69 percent) for 656 yards and four touchdowns with no interception. Thirteen players have caught at least one pass, led by Ty Rutledge's 12.