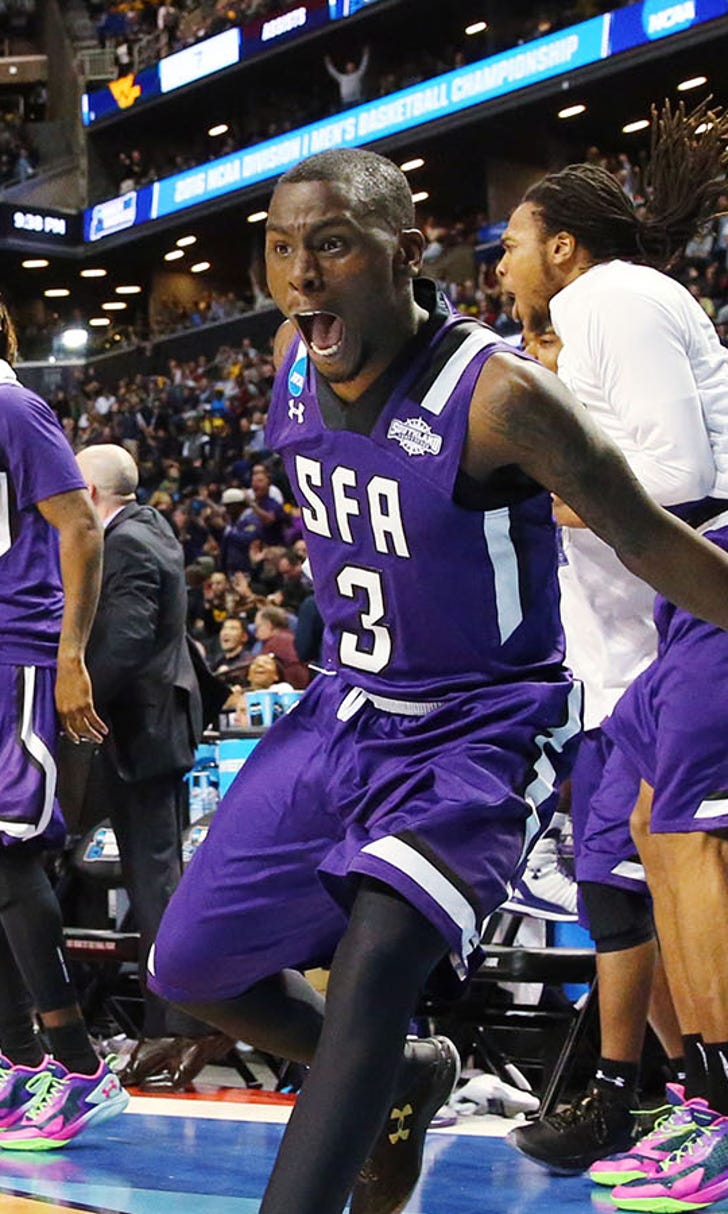 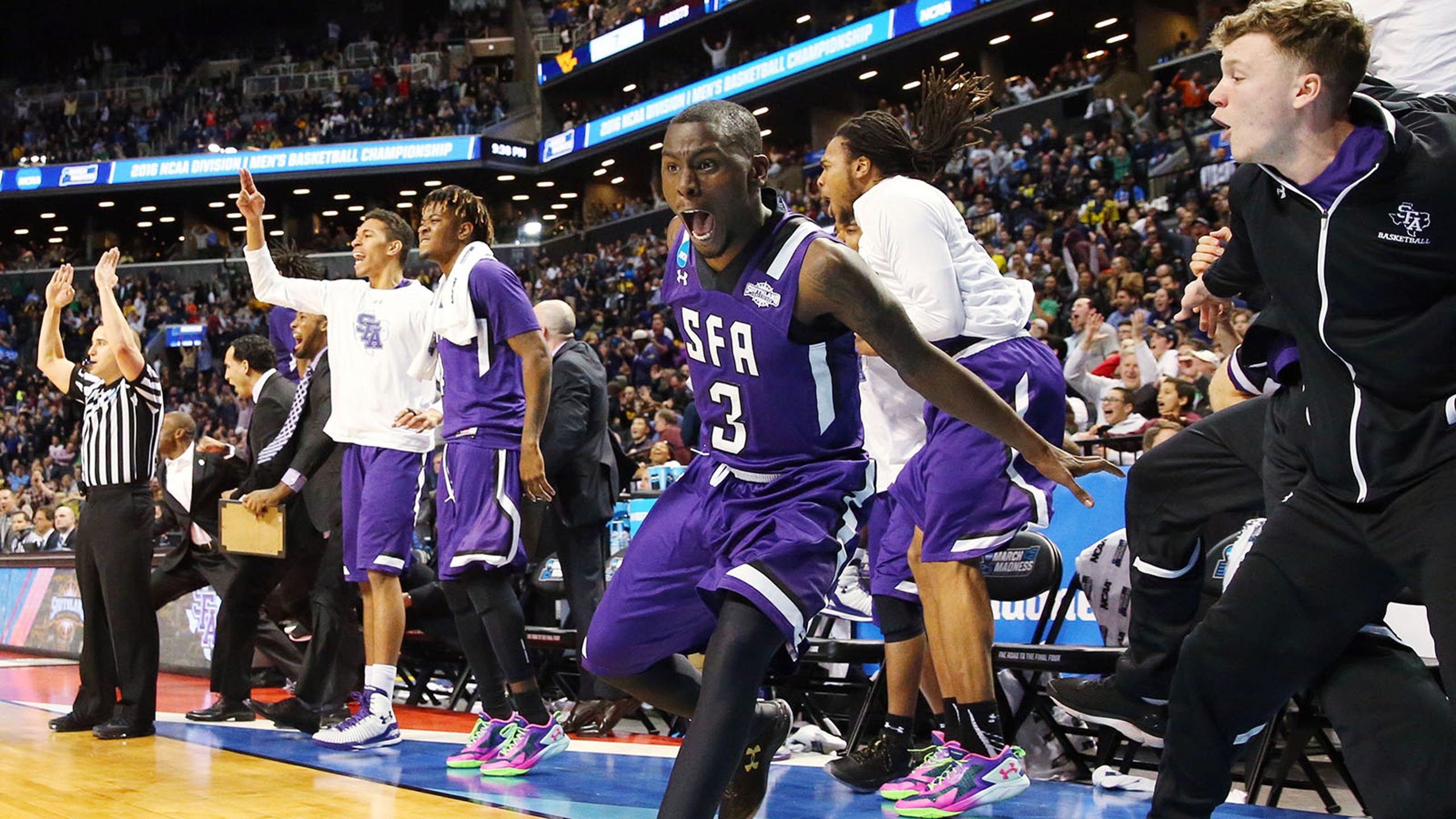 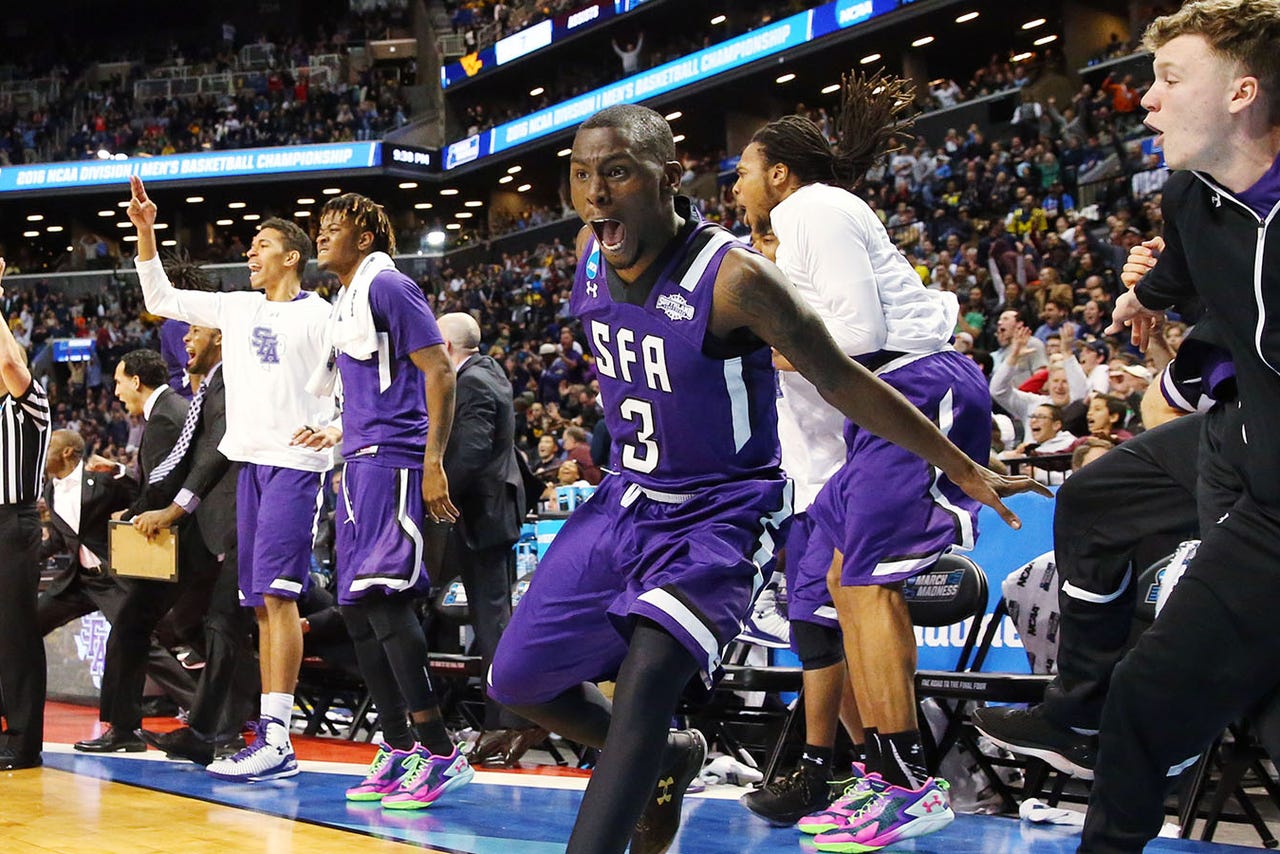 NEW YORK — The lucky beard that makes Thomas Walkup look as if he could be the Stephen F. Austin mascot is staying on for at least a couple more days. The Lumberjacks' winning streak reached 21 on Friday night with the biggest victory in school history.

Walkup scored 33 points and the 14th-seeded Stephen F. Austin faced down West Virginia's full-court press with its own in-your-face defense, pulling off a rugged, 70-56 first-round upset of the third-seeded Mountaineers in the NCAA Tournament.

The Lumberjacks (28-5) will look to extend the nation's longest winning streak and reach the round of 16 for the first time in school history against either six seed Notre Dame on Sunday in the second round of the East Region.

The beard Walkup started growing in November is safe.

"We've been winning so I kept it for that reason," he said.

The Mountaineers (26-9) and Lumberjacks played physical, chest-to-chest defense, contesting not just every shot, but every pass. Neither team shot better than 31 percent from the field.

Walkup, the two-time Southland Conference player of the year, took it to the teeth of West Virginia's D and went to the line 20 times. He made 19, including two to make it 60-47 with 5:15 left in the second after West Virginia coach Bob Huggins' griping to officials drew a technical.

"When you don't prepare the right way, not individually, but as a team, if we're not dialed in as a team, that's what happens," West Virginia's Devin Williams said.

Walkup said he could tell by the way West Virginia was talking in the media leading up to the game that the Mountaineers underestimated the Lumberjacks.

"We're a smallish school, a mid-major school. They had never head of us," Walkup said. "I've watched them play many times just on my own. They haven't had that luxury. They know us now. Probably something that they won't take for granted again."

When Clide Geffard slammed home an alley-oop to make it 66-54 with 2:40 left, the Lumberjacks' purple-clad supporters roared, knowing all that was left was the celebration.

Walkup followed with a 3 for good measure.

"It felt incredible. To do that for the team, for the city of Nacogdoches, for the school, for everyone that supported us," the senior said.

West Virginia came in leading the nation in steals per game at just under 10. Press Virginia, the Mountaineers call it, but they met their match in Stephen F. Austin. The Lumberjacks lead the nation in turnovers forced at nearly 19 per game, though they do it more with half-court traps and tight man-to-man. They turned over West Virginia 22 times and gave the ball away just seven times.

"I don't know why anybody would waste energy pressing us," Huggins said. "We'll throw it to you regardless. That would be a waste of energy really. We're very charitable. We're one of the most charitable groups in college basketball. The second straight game we've turned it over 20 times."

The Lumberjacks said they weren't flustered by West Virginia's frenetic defense and intensity because they play that way, too.

"It was like a practice out there," SFA guard Jared Johnson said.

The Mountaineers from the Big 12 became the only No. 3 seed to be eliminated in the first round and joined No. 2 seed Michigan State and No. 4 seed California as Friday's biggest surprise losers.

This is the third straight season Stephen F. Austin has reached the tournament under coach Brad Underwood and the Lumberjacks' second tournament victory, but there was no doubt that this victory was their greatest achievement.

"Our players ... fought and competed and were just as good as them, and we had the best player on the court tonight," Underwood said.

Stephen F. Austin: The Lumberjacks beat VCU in overtime in the round of 64 in 2014 for the schools' first NCAA Tournament victory. ... Geffard had 14 points and eight rebounds. ... SFA scored 29 points off turnovers.

West Virginia: Williams, the 6-foot-9 power forward and second-leading scorer, had two points and no field goals in the first half. The Mountaineers hoped to exploit Williams' size in the paint against the undersized Lumberjacks but SFA's double-teams and switches left him with few good looks. Williams' first field goal came off an offensive rebound with 9:58 left in the second half. He ended up leading the Mountaineers with 12 points and 17 rebounds.

Stephen F. Austin faces Notre Dame for a trip to the Sweet 16 in Philadelphia.