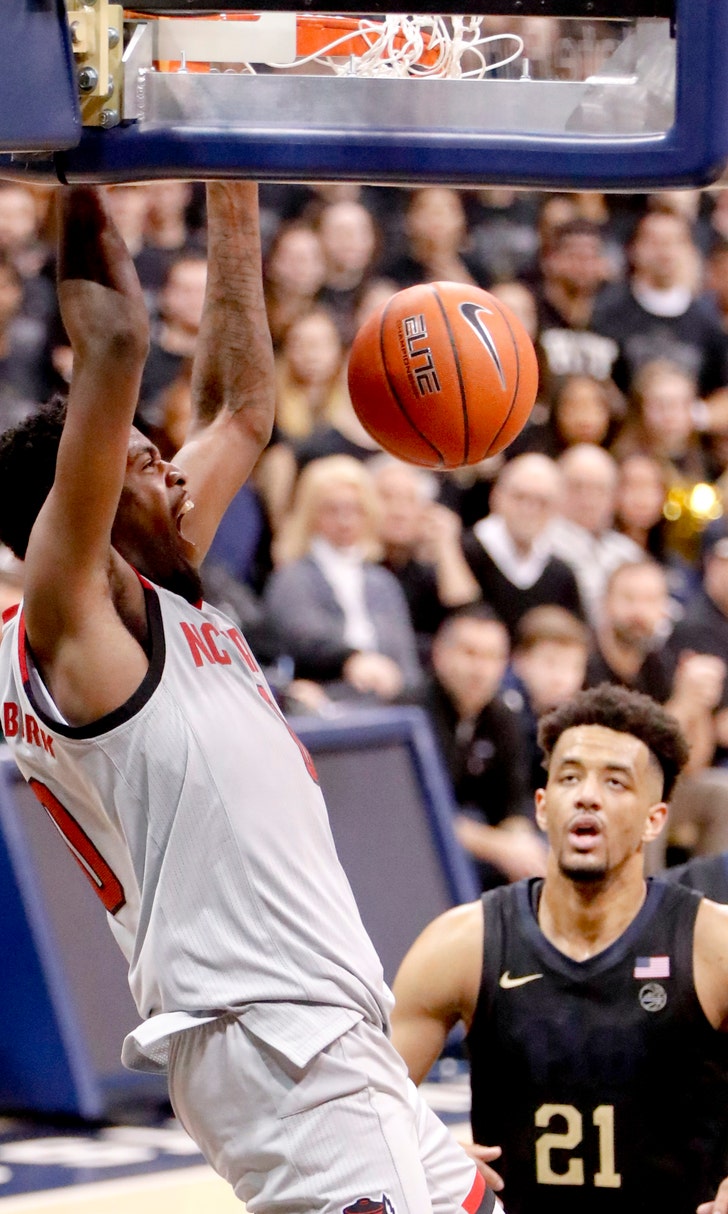 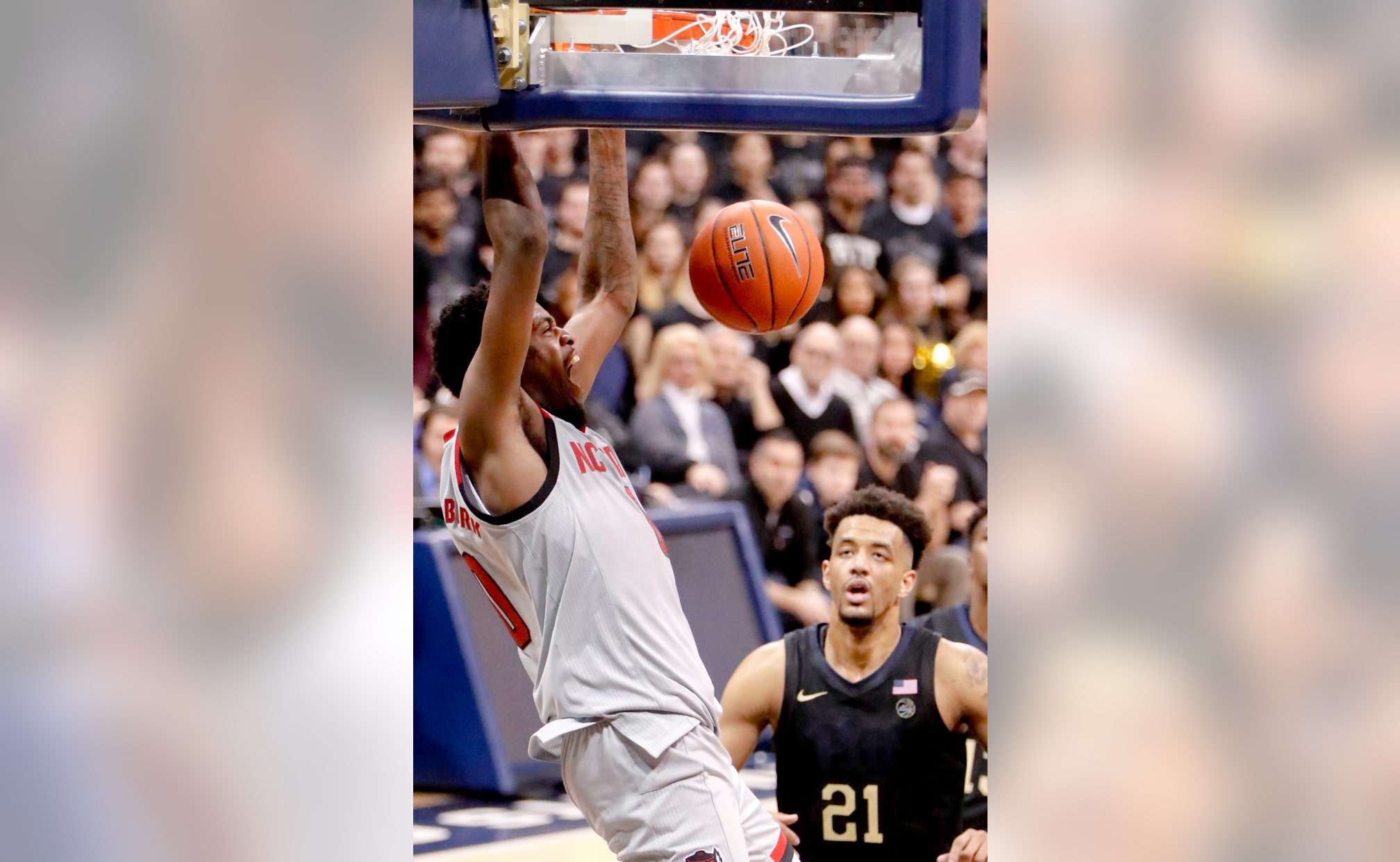 PITTSBURGH (AP) — North Carolina State opted for modified shootaround late Friday night after arriving in Pittsburgh. No plays. Just shots. Lots and lots of shots, not the worst idea in the world less than a week removed from a record-setting loss to Virginia Tech in which the Wolfpack managed just nine baskets in 40 minutes.

Head coach Kevin Keatts jumped in the fray during the laidback session, pointing out he might have been the best shooter on the floor. While his players don't quite remember it that way — guard Braxton Beverly claims Keatts was "extending the truth" — either way it created the desired effect. The Wolfpack walked onto the Petersen Events Center floor loose, kept their composure when the host Panthers made a second-half push and held on for a 79-76 win to snap a three-game losing streak.

"I think we played a complete game," Keatts said. "We played through some adversity."

The Wolfpack (17-7, 5-6 Atlantic Coast Conference) let a 14-point lead briefly get away in the middle of the second half before relying heavily on Beverly, C.J. Bryce and Markelle Johnson to pull through. Bryce scored 21 points, including three free throws in the final 10 seconds. Beverly added 17 behind five of N.C. State's season-high 14 3-pointers and Johnson finished with 10 points and a season-high eight assists.

After being limited to just 24 points — the fewest ever by a team ranked in The AP Top 25 (the Wolfpack were 23rd last week) in the shot-clock era — last Saturday, N.C. State is averaging 87.5 points over its last two contests.

"We know we can score," Bryce said. "We have very talented players. We have players who can go get buckets if we need it. We were just focused on playing as a team tonight and I think we did great at that."

Bryce went to the line with the Wolfpack (17-7, 5-7 Atlantic Coast Conference) holding onto a 76-75 lead with 9.9 seconds left. He calmly drained both free throws in front of the blacked-out T-shirt student section.

N.C. State opted to foul ahead by three. Pitt's Sidy N'Dir made just one of two with 7 seconds remaining. Bryce grabbed his seventh and final rebound and made one of two with 5.5 seconds left. N'Dir collected the rebound and weaved his way through traffic but his off-balance 3-pointer from outside the top of the key was left all the way as time expired.

"I wanted to make the last one to make it a four-point game but I felt like we did a really good job, once I missed it, getting back and forcing a tough shot," Bryce said after N.C. State won its eighth straight over the Panthers.

Xavier Johnson led Pitt (12-12, 2-9) with 17 points to go with five rebounds and four assists. Jared Wilson-Frame hit 6 of 7 shots to finish with 16 points, N'Dir and Terrell Brown added 12 each and Trey McGowens finished with 11 points but the Panthers ran out of gas late.

Pitt missed its last seven shots, including potentially game-tying 3-point attempts by Johnson, N'Dir and Brown during an extended possession in the final 90 seconds. Johnson did make two free throws to get Pitt within 76-75 but the Panthers would get no closer. Pitt has dropped seven consecutive games, the last three by nine points or less.

"It's frustrating because you're always right there," Wilson-Frame said.

N.C. State won each of last seven meetings, including an 86-80 victory at home on Jan. 12 thanks to 54 points off the bench. The Wolfpack built a slim 41-38 halftime lead, relying heavily on a massive advantage off the backboard and some sloppy ballhandling by the Panthers, who turned it over 11 times and struggled to keep N.C. State off the offensive glass.

N.C. State pushed the advantage to 14 early in the second half before Pitt responded with an 18-2 surge led by Wilson-Frame and N'Dir to go in front 61-59.

The momentum didn't last. Dorn and Bryce knocked down 3-pointers on the Wolfpack's next two trips and while Pitt managed to tie it a couple of times, the Panthers couldn't quite sneak out in front.

"We're on the ropes a little bit right now, but we have to fight our way off of it," Pitt coach Jeff Capel said.

N.C. State: The Wolfpack showed an ability to defend when they had to against Pitt, particularly after the sudden 3-point barrage that briefly gave the Panthers the lead. "We weren't panicking," Beverly said. "In this conference, every team has the capability of going on runs like that. To get through it you've got to stay solid and stay together."

Pitt: The Panthers remain engaged under Capel but the losses are starting to pile up. Getting five players in double figures is a positive development for a group that's become overly reliant on Johnson and Wilson-Frame to provide the offense of late.