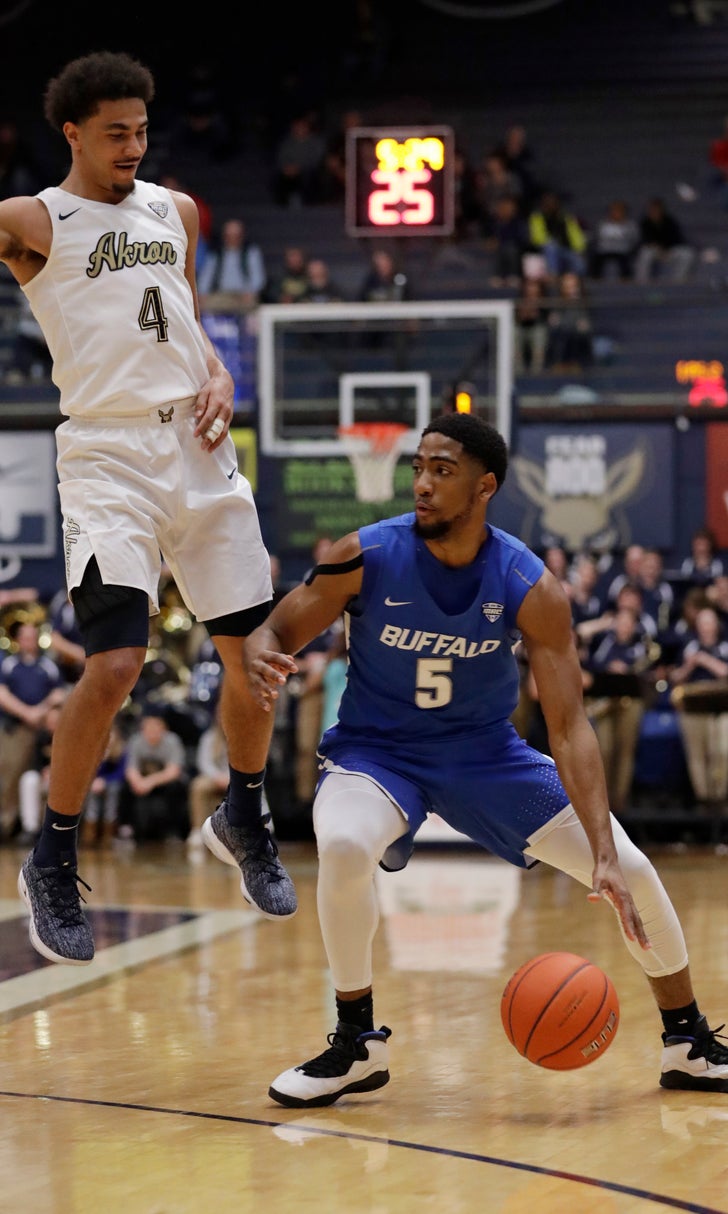 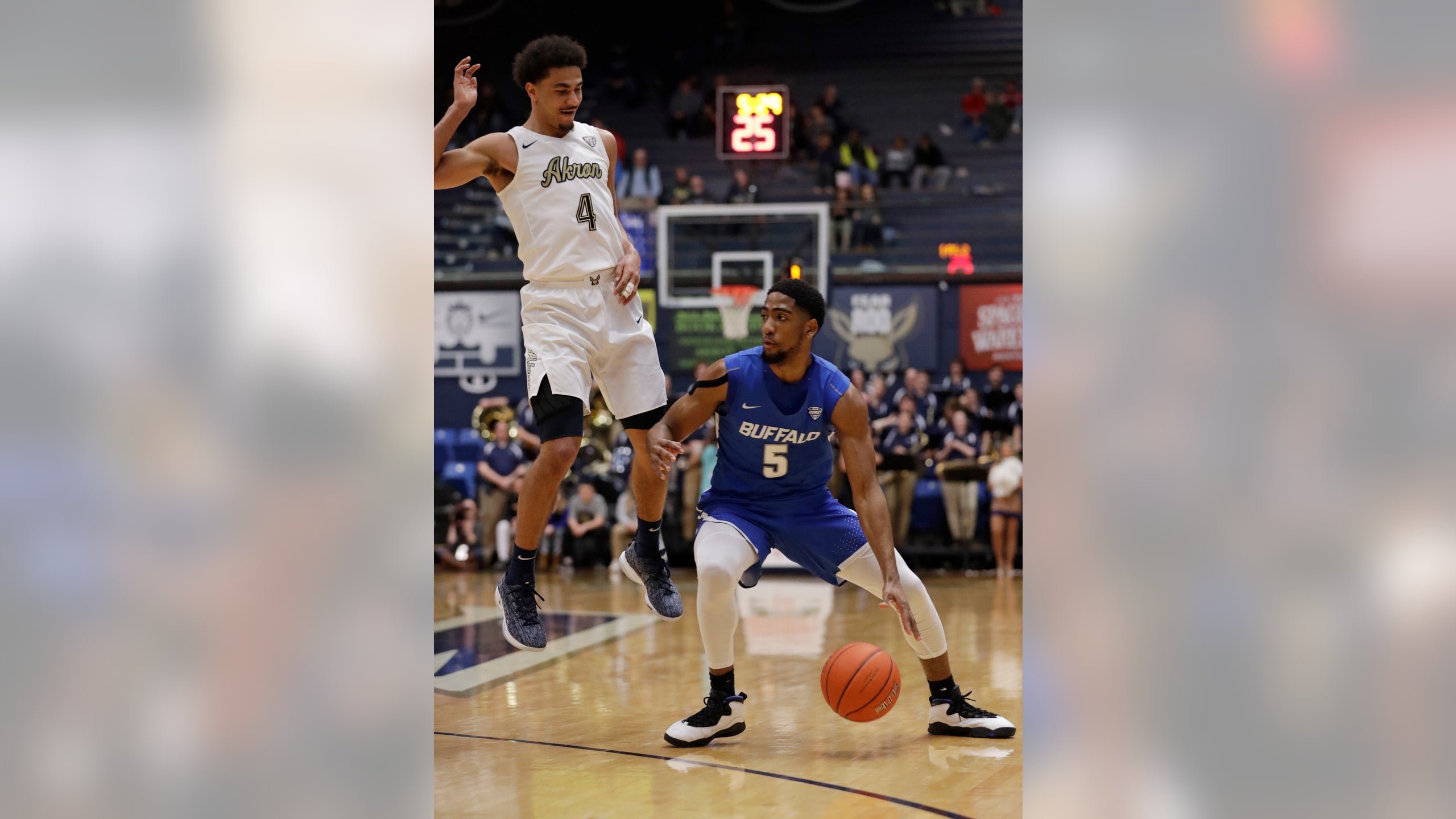 CJ Massinburg scored 21 points, Dontay Caruthers added 15 and No. 25 Buffalo slogged its way to a 76-70 win over Akron on Tuesday night, dropping the Zips to 0-31 against ranked teams.

The Bulls (21-3, 9-2 Mid-American Conference) were held to one of their lowest point totals this season, but the defending MAC champs were able to do enough on both ends of the floor against the Zips (14-10, 6-5), who came in ranked 13th nationally in scoring defense.

Coach Nate Oats wasn't happy with his team's overall performance. The Bulls made 17 turnovers, several careless ones, and nearly blew a late lead.

"Give them credit. That's one of the best defenses we faced all year," Oats said. "They made it hard on us and we make it hard on ourselves sometimes too with our stupid turnovers."

Caruthers came off the bench and gave the Bulls some solid minutes, drawing a charging foul during a key second-half stretch for Buffalo, which forced two 30-second clock violations after halftime.

Loren Cristian Jackson scored 20 and Tyler Cheese 16 for the Zips, who were down by nine with 43 seconds left but closed within 73-70 on Daniel Utomi's 3-pointer with 16.3 seconds to go.

Akron fouled Massinburg, who has been playing with a shoulder injury, on the inbounds pass and the senior guard made the first free throw. He missed the second, but Caruthers made a great play to grab the offensive rebound and dropped in a layup for the final bucket.

Oats bemoaned the Bulls' inability to put the game away in the final minutes, something they must do better with bigger games looming.

"We were up 10 with two minutes to go and nine with 30 seconds to go," Oats said, shaking his head. "We gotta do a way better job of closing games when we have leads."

Buffalo: These are the dog days of the season, the mid-February stretch that can test a team's resolve. The Bulls have been dealing with some injuries, but they haven't played a complete game in nearly a month.

With the MAC and NCAA tournaments drawing near, Oats wants his squad to start clicking.

"We need to be playing good basketball come March," Oats said. "It would be great to get to March on a run. Usually this team, since I've been here, we usually peak in March, so now's the time to start turning this up. We show signs of it."

Akron: The Zips were coming off a big win over rival Kent State, but coach John Groce didn't like the way his team looked from the start.

"We got what we deserved," he said. "We didn't play very well. I thought our body language, excuse-making, that's out. And when you do that stuff, you get what you deserve. We got to be better. We made a lot of improvement from last year when it came to attitude and team. But some guys today need to get over their feelings. It's not about their feelings. It's about Akron."

Groce was not pleased with the free-throw disparity.

Buffalo went 21 of 26 from the line while Akron was just 4 of 7. Massinburg alone shot 12 free throws, and Groce said some of those came after some "hand-check calls."

"I'll have to take a look at it, but 26-7 on free-throw differential," he said. "I want to take look at it before I have further comments on that. That's tough. You're going to be in a hole there."

Akron is still looking for its first win over a ranked team. Buffalo was just the fifth ranked opponent to visit James A. Rhodes Arena — where LeBron James played numerous high school games — and the first since No. 20 Nevada in 2006-07.

Buffalo's Jeenathan Williams was called for a technical foul in the first half, when he buried a 3-pointer and then barked at Akron's bench. Moments later, Groce got slapped with a "T'' for expressing his difference of opinion with the officials over a call.

The Bulls were ranked as high as No. 14 in the AP Top 25 earlier this season, but have been sliding following losses at Northern Illinois and Bowling Green. Their run of being ranked 14 straight weeks is a MAC record, bettering the previous mark held by Bowling Green (1961-62).

Buffalo: The Bulls get back on the road with a visit to Toledo on Friday.

Akron: The Zips go to Ball State on Saturday.

Mid-American
share story
those were the latest stories
Want to see more?
View All Stories
Fox Sports™ and © 2021 Fox Media LLC and Fox Sports Interactive Media, LLC. All rights reserved. Use of this website (including any and all parts and components) constitutes your acceptance of these Terms of Use and Updated Privacy Policy. Advertising Choices. Do Not Sell my Personal Info