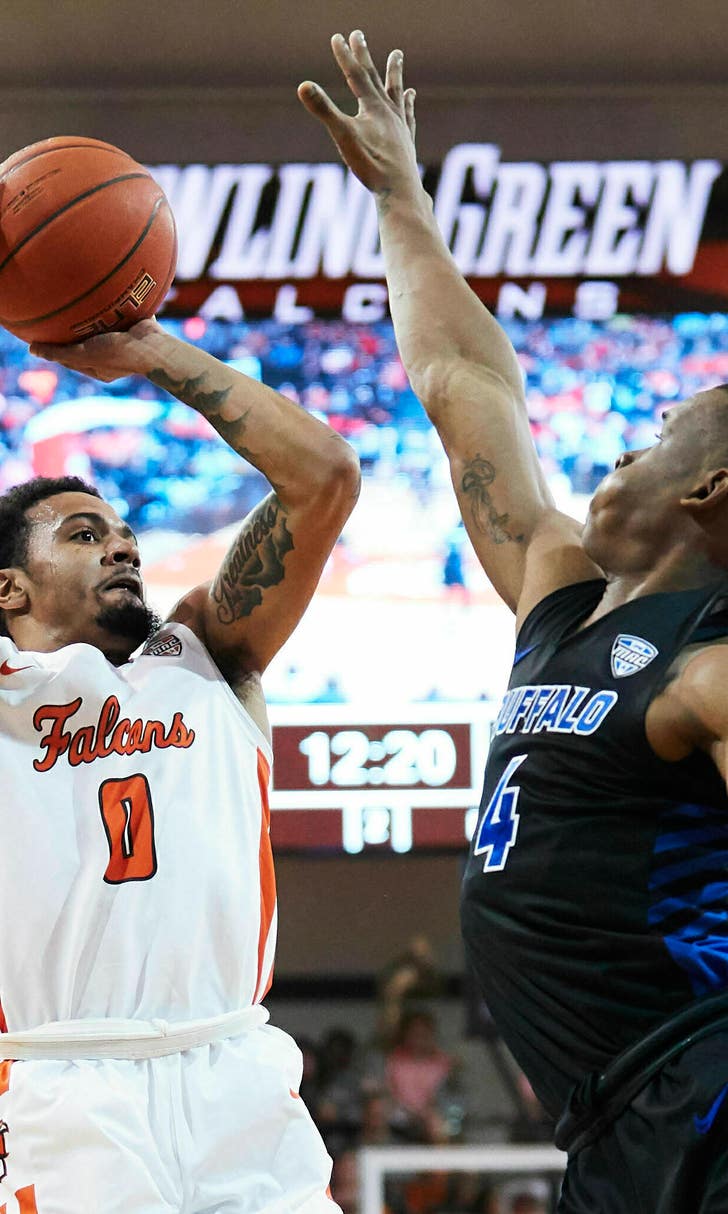 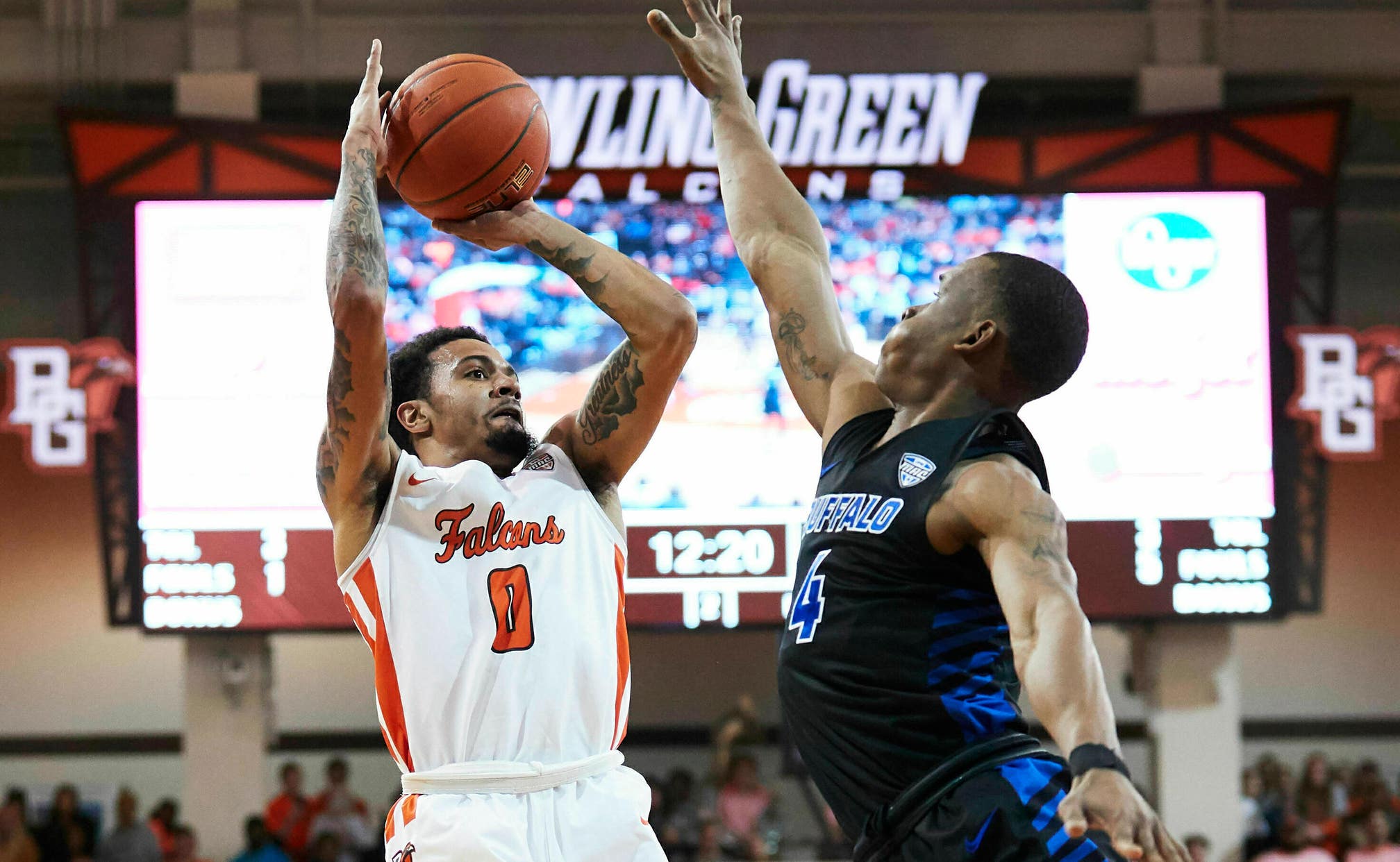 previous story
Emotional Philip Rivers thanks San Diego for its support
next story
A deluge of drones fly over Super Bowl stadium, despite ban

The shot bounced off the rim, and the Falcons closed out their upset.

"You make some, you miss some," Massinburg said.

Massinburg didn't miss many, scoring 19 of his 26 points in the second half, but it wasn't enough for No. 18 Buffalo. The Bulls wasted an eight-point halftime lead and lost 92-88 to Bowling Green on Friday night.

The announced crowd of 5,000 was the largest for a men's basketball game at the Stroh Center, where the Falcons have been playing since 2011-12, and Buffalo was the highest-ranked opponent to come to the building. The fans were appropriately fired up throughout the night. Some people wearing orange "BEAT BUFFALO" shirts, and members of the Bowling Green football team — wearing jerseys that easily identified them — packed one corner.

Buffalo led 47-39 at halftime, but Bowling Green scored the first seven points of the second half.

"We talked about that at halftime — let's win the first four minutes," Bowling Green coach Michael Huger said. "That was our goal coming out — wanted to cut into the lead right away."

The decisive stretch was a 12-2 run by Bowling Green, capped by a 3-pointer by Antwon Lillard that put the Falcons up 84-73. Buffalo scored eight straight points after that, and then it was just a question of whether Bowling Green could hold on.

Massinburg and Davonta Jordan each missed the front end of a one-and-one for the Bulls in the final 30 seconds. Caruthers pulled Buffalo within two with a three-point play with 14 seconds left, and after a free throw at the other end made it 91-88, Massinburg had a chance to tie it. But he missed a 3-pointer from near the top of the key, and Turner's free throw at the other end sealed the win for the Falcons.

The home fans even earned points for politeness afterward, waiting in the bleachers for a little while. Buffalo's players had time to clear the area, then Bowling Green fans rushed the court to continue the celebration.

"Top 25 team, game for first place, everybody came out," Buffalo coach Nate Oats said. "That's kind of why we play the game. These guys spend thousands of hours working on their game. They like to play in front of people. I thought it was great. Hopefully, we can continue to draw great crowds, both at home and on the road.

"It's fun to play in an environment like that. It's just a little bit better when you play a little harder and dig in on the defensive end."

It was a season high in scoring for Frye, who went 10 of 16 from the field and 3 of 7 from 3-point range. He was averaging only 11 points a game coming in.

Buffalo: Rebounding is a strength for Bowling Green, but Buffalo actually outrebounded the Falcons 42-30. That advantage didn't help that much, since the Bulls had 18 turnovers to Bowling Green's nine. Buffalo doesn't mind playing at a quick tempo offensively, but the Bulls can't afford to become too sloppy with the ball.

Bowling Green: The Falcons are unbeaten at home this season, and it was easy to see why. The fans got what they came for — a thrilling game and a victory. Huger hopes this type of crowd can show up more often.

"It was great for our guys to be able to play in an atmosphere like that," Huger said. "That was the most important thing, is our guys got a chance to enjoy it, and you enjoy it even more with a victory."

The Bulls may drop out of the Top 25 now, but given the environment and the quality of the opponent, this was by no means a terrible loss.

Buffalo: The Bulls get a bit of a break before hosting Central Michigan on Feb. 9.

Mid-American
share story
those were the latest stories
Want to see more?
View All Stories
Fox Sports™ and © 2021 Fox Media LLC and Fox Sports Interactive Media, LLC. All rights reserved. Use of this website (including any and all parts and components) constitutes your acceptance of these Terms of Use and Updated Privacy Policy. Advertising Choices. Do Not Sell my Personal Info