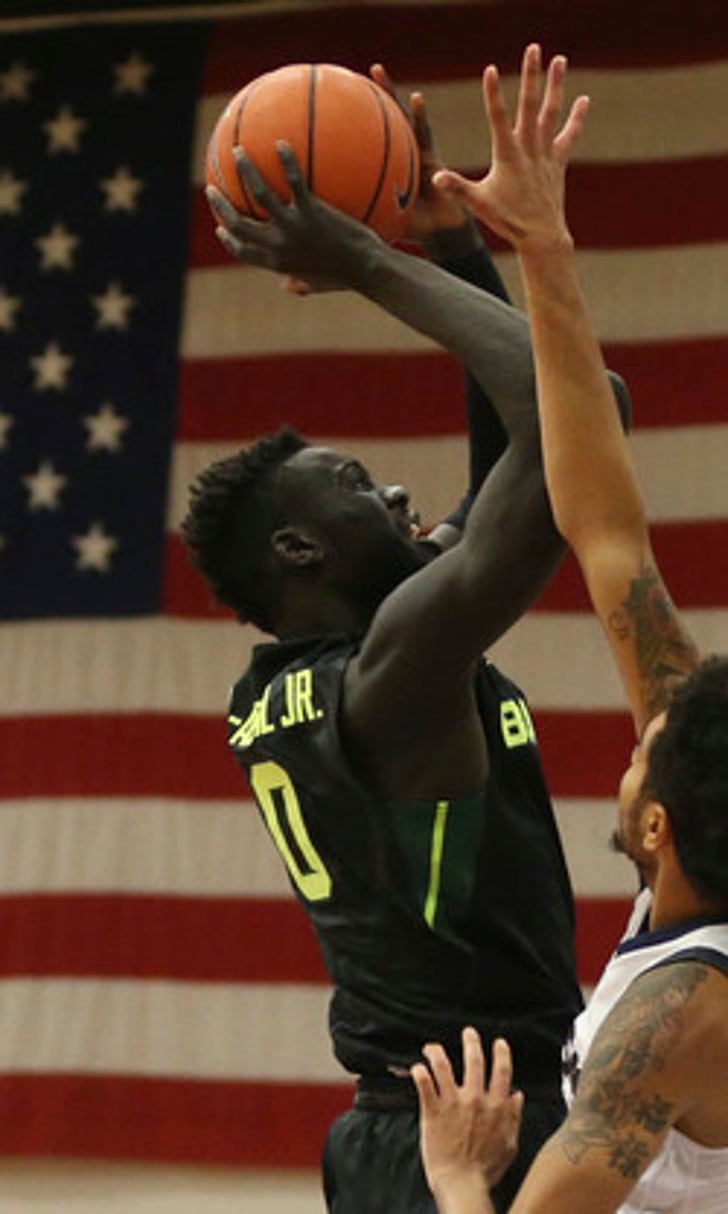 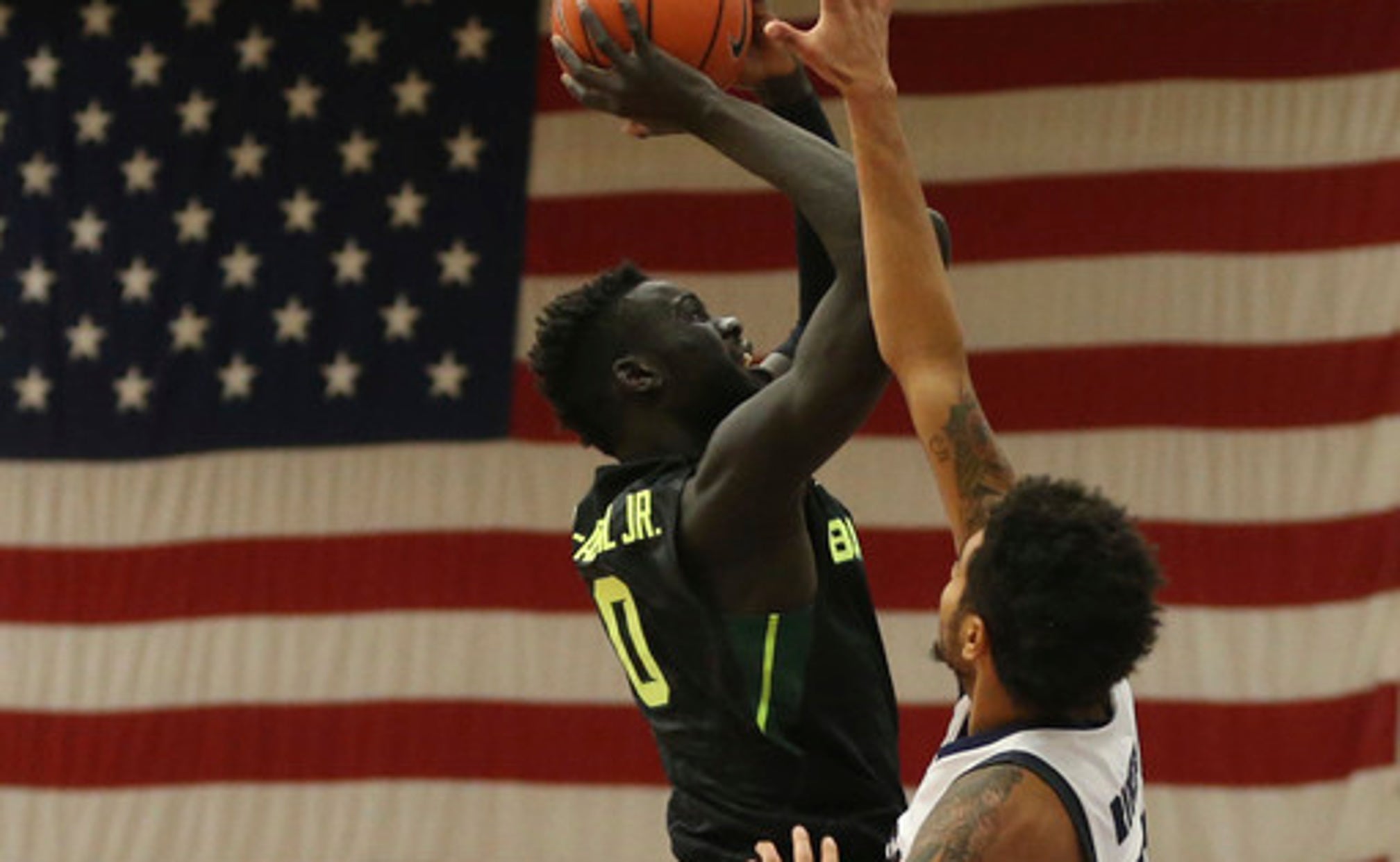 FORT HOOD, Texas (AP) Al Freeman appreciated a second chance to play in front of the soldiers and their families at Fort Hood.

The Baylor guard showed it with his best game of the season.

Freeman scored a season-high 19 points and made a career-best five 3-pointers and the fourth-ranked Bears returned to the sprawling Army post about an hour's drive south of their Waco campus with an 82-57 victory over Jackson State on Saturday night.

A year ago, Freeman scored 12 points in a 104-59 rout of Division III Hardin-Simmons. This time he was 5 of 8 from long range in the first game featuring a pair of Division I teams at Fort Hood, one of the nation's largest Army posts covering about 340 square miles and housing more than 40,000 soldiers.

The setup was similar to a year ago, with a slightly larger and near-capacity crowd at 2,400-seat Abrams Gym, which has a large American flag on the wall behind the benches opposite the only permanent set of stands.

And just like a year ago, Baylor players signed autographs after the game at one end of what looks like a high school gym except for the larger space behind each basket. The Bears enjoyed last year's ''thank you'' and wanted to do it again .

''I think everyone feels the same way, especially around the holidays when we get to go home to family and friends and so many of them don't get to see loved ones because they're out protecting our freedom,'' coach Scott Drew said.

Baylor's Jo Lual-Acuil had a season-high 17 points with six rebounds and five blocks - slightly better than his 4.3-block average that ranks second nationally. The Bears are 10-0 for the first time since starting 17-0 in 2011-12.

Edric Dennis scored 21 points for Jackson State (3-8), which stayed close until a 24-6 Baylor run that started late in the first half and ended with the Bears up 58-38 with about 12 minutes remaining.

Jackson State's Sherron Wilson was ejected for flagrant foul that sent Johnathan Motley sprawling to the floor midway through second half, not long after Derek Roscoe was given a technical for saying something to Terry Maston after blocking Maston's shot.

Wilson's foul was the third technical in about 5 minutes for the Tigers.

''This is the most frustrating part of our season because we've have three season-ending injuries to three starters,'' Jackson State coach Wayne Brent said. ''So right we're just trying to scratch and claw. Even with our other guys, we're still short-handed because they've got such good talent.''

PUTTING ON A CLINIC

For the second straight year, Drew and his staff conducted a clinic for the kids of soldiers about a week before the game. ''I love the clinic, coming down here and helping kids because dads that can't be here to work them out because they're deployed,'' Drew said. ''To know that their 6-year-old, 8-year-old, had a good chance to run around with the ball and get out of mom's hair for an hour is probably a good thing.''

Jackson State guard Paris Collins briefly lived at Fort Hood while his dad spent time there. He dad was in the Air Force for 22 years. ''It was a dream playing for my dad tonight,'' said Collins, the other double-figure scorer for the Tigers with 16 points. ''He's done so much for me. I had `Pop' coming to watch me, you know what I'm saying. It was a blessing for him to be here.''

Jackson State: The three Brent referred to that are out for the year are guard Chace Franklin (shoulder), Treshawn Bolden (broken foot) and Charles Taylor (knee). The Tigers had to feel a boost by the way they played without three starters in the first half.

Baylor: The Bears were a little flat after taking a big early lead against another SWAC opponent in Southern earlier in the week. But Baylor looked like a team with three wins over Top 10 teams in a 10-minute stretch that started late in the first half.

Baylor: Bears have rare case of playing on consecutive days in different facilities, with a game at home Sunday against John Brown. There's just one nonconference game left after that Wednesday at home against Texas Southern before the Big 12 opener Dec. 30 at Oklahoma.