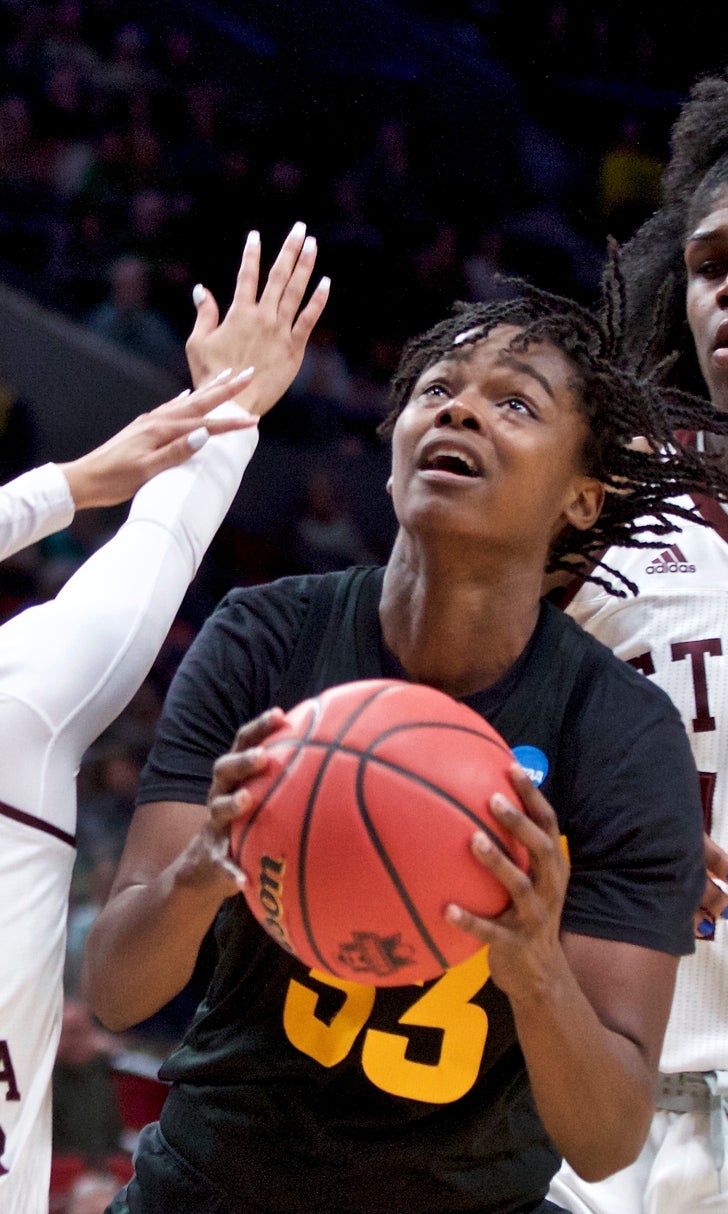 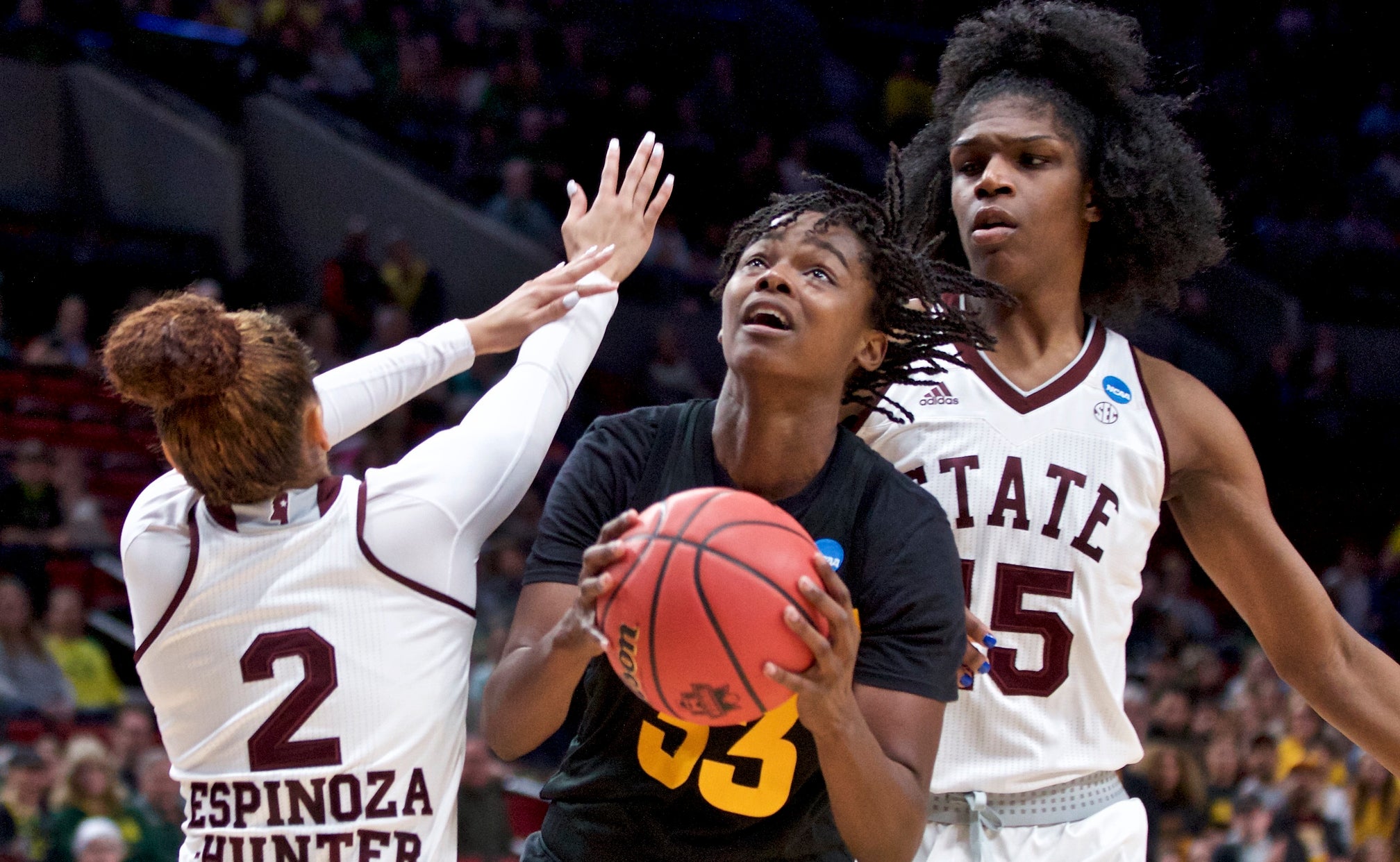 PORTLAND, Ore. (AP) — Teaira McCowan knows she needs to keep her composure when opponents get physical.

McCowan finished 22 points and 13 rebounds, and top-seeded Mississippi State earned a spot in the Elite Eight for the third straight season with a 76-53 victory Friday night over No. 5 Arizona State.

The 6-foot-7 SEC Player of the year had the constant attention of Arizona State's defense, just like she's been targeted all season.

"I know that I have to keep a cool head a little bit for my teammates, as well as my coaching staff. I know I can't go out there and do something crazy and get a technical and be sitting on the bench because that's not what my team needs," she said.

Jazzmun Holmes had 13 points and seven assists, and Andra Espinoza-Hunter added 12 points for Mississippi State, which led by as many as 24 points.

Kianna Ibis had 16 points for the Sun Devils (22-11), who were vying for their first trip to the round of eight since 2009 but got into foul trouble at the end.

"It was really a battle down there," Ibis said. "It was a very physical game and we tried to match their physicality. We weren't disciplined today and that really showed."

It was the 11th straight victory for the Bulldogs, who defeated Arkansas for the SEC Tournament title and won the regular-season conference title with a 15-1 record.

McCowan, a 6-foot-7 senior center who was SEC Player of the Year, had her 30th double-double of the season, a new school record. She also set the NCAA career rebounding record when she passed Sylvia Fowles' mark of 221. McCowan now has 225 in her career, doing it in three less games then the former LSU great.

"My hard work is paying off. I fight for those rebounds as well as anyone else," she said. "I'm just congratulating myself on just going in and scoring on every board."

She was averaging 18.3 points and 13.5 rebounds going into Friday's game. Following the Bulldogs' lone loss this season to Missouri back on Feb. 14, she has averaged 21.3 points a game.

Her tip-in put the Bulldogs up 63-47 with just under six minutes to go in the game.

"T has really gotten smart. I give the kid a lot of credit," coach Vic Schaefer said. "She's developed mentally in understanding what she can and can't do, whereas, let's just say a month and a half ago, she was a bull in a china cabinet that night we played in Missouri and got beat. She's learned from that night."

To get to Portland, Mississippi State defeated 16th-seeded Southern 103-46 in the opening round before an 85-61 victory over No. 9 Clemson on Sunday.

Arizona State was making its sixth consecutive NCAA Tournament appearance. The team has reached the final eight twice, in 2007 and 2009.

Coach Charli Turner Thorne has never been to the Final Four in her 22 years in charge of the Sun Devils.

Arizona State: It was the 61st straight game that Arizona State used the starting lineup of Ibis, Courtney Ekmark, Robbi Ryan, Charnea Johnson-Chapman and Reili Richardson. ... The Sun Devils were ranked No. 22 in the final AP rankings of the season. ... Arizona State won 20-plus games for the sixth-straight season. ... Sophia Elenga and Jamie Ruden both fouled out.

Mississippi State: The Bulldogs were No. 4 in the final AP rankings. ... Mississippi State down the Sun Devils 65-57 last season at the Cancun Challenge, the last meeting between the two teams.

APOLOGY: Following the game, Turner Thorne made a point to apologize to the Bulldogs.

"Obviously it was a very physical game. One of our players did say something at the end of the game that upset another one of their players," Turner Thorne said. "That's not who we are, and that's not what we ever do. We always shake hands. We're always very respectful and classy. She feels really bad and I just wanted to say that."

It was not known what was said, but Schaefer confirmed that McCowan was one of the players involved.

"I think one of her kids and T might have said some things to each other going through the line. I corrected T as soon as we went in the locker room," Schaefer said. "Before I said anything to my team, I called T in, we met. Again, I'm not mad, I'm just trying to teach her, trying to coach her, just like Charli is coaching and teaching her kid. That's who we are. We try to run a classy program."