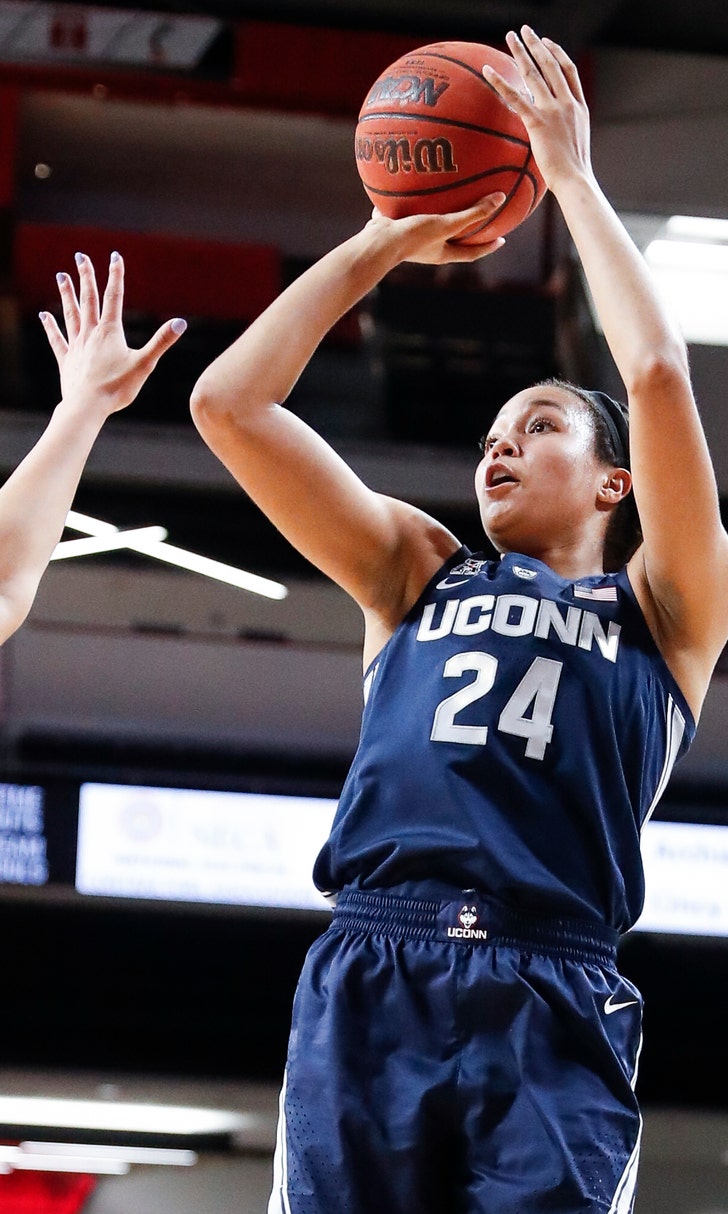 CINCINNATI (AP) — Two days later, No. 2 UConn was still feeling the sting of a troubling loss.

Senior forward Napheesa Collier scored 20 points Saturday, reached 2,000 for her career, and steadied the Huskies to a 65-55 victory over Cincinnati that was uncharacteristically challenging.

On Saturday, they showed the after-effects of their second loss.

UConn (19-2, 8-0 American Athletic) shot poorly and got outrebounded during the 78-69 loss on Thursday , its first loss to Louisville since 1993 after 17 consecutive wins in the series. UConn has lost multiple games in a regular season for the first time since 2012-13, when the Huskies dropped four before winning the NCAA Tournament title.

They were out of sorts again on Saturday against a team they've dominated. UConn won its last nine games against Cincinnati by an average of 54 points.

Collier reached the 2,000-point mark with a layup late in the third quarter . She got her 1,000th rebound during a loss on Thursday at No. 3 Louisville.

"I was pretty tired, but we have to be able to focus," said Collier, who became the fifth Husky to have 2,000 career points along with 1,000 rebounds. "We have to be even sharper."

Auriemma called a timeout after Nikira Goings' 3-pointer cut UConn's lead to 59-51 with 4:54 to go. Collier had a steal and a three-point play to keep Cincinnati at arm's length.

"You never get less than her best effort no matter what," Auriemma said. "That steal coming out of the timeout is a perfect example. You knew she was going to do something because she always does."

Cincinnati (14-8, 6-3) lost 82-38 at Connecticut on Jan. 9. The Bearcats had won their last five games and played much better defense in their rematch with UConn. The 10-point deficit matched the closest in the teams' 20-game series, all won by UConn.

"It never got away from us," said Goings, who led Cincinnati with 14 points. "We were able to stick with them."

Cincinnati: It was an encouraging showing for the Bearcats, who haven't played UConn so close since a 70-60 loss on Jan. 30, 2007.

"I'm really proud of this group and where we're going," first-year coach Michelle Clark-Heard said. "We're excited to be where we're at right now."

The Huskies' other loss was 68-57 at Baylor on Jan. 3. They rebounded by beating Houston 81-61. This time, they had a tougher time getting over a defeat.

"I think after this one, this one kind of stung a little more and hurt a little more, and that's probably a good thing," Auriemma said.

Katie Lou Samuelson missed all six of her shots from beyond the arc. In her last five games, the senior is 8 of 37 on 3-point tries.

"Right now she's in a not-so-good place," Auriemma said. "Will she get out of it? I assume so."

Auriemma on his team's inconsistency: "When we're good, we're really, really good. When we're not, we're awful, and it's been a long time since that's happened."