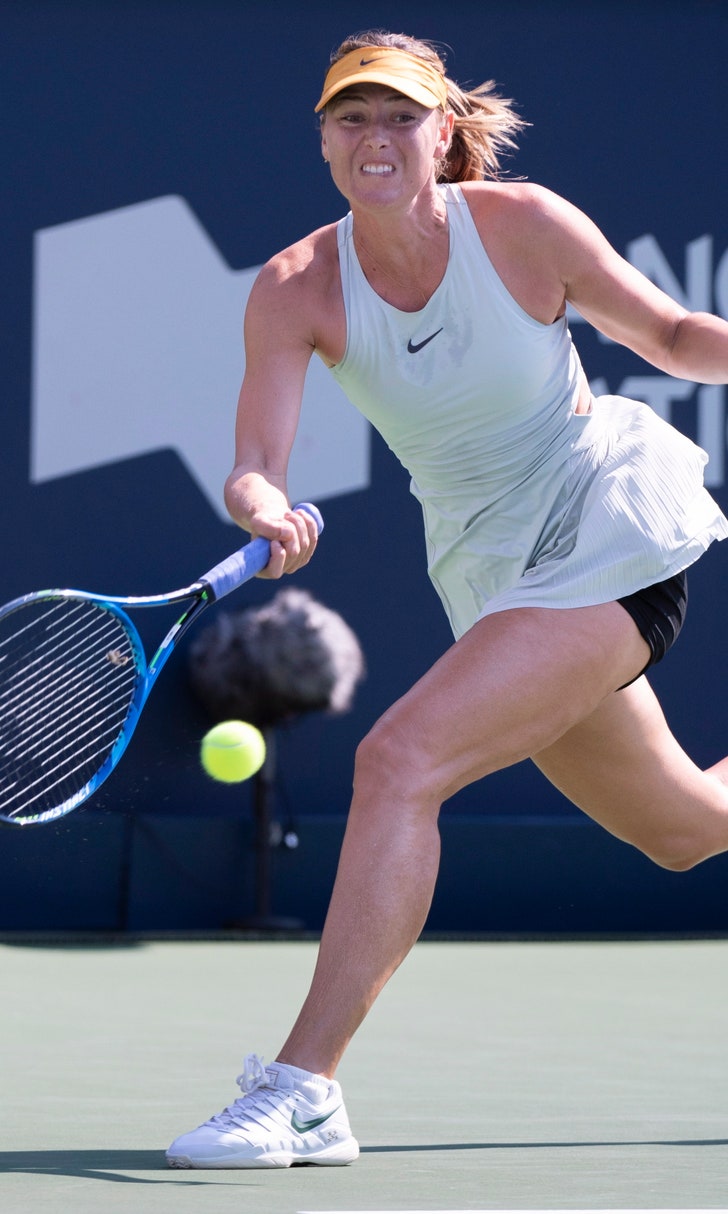 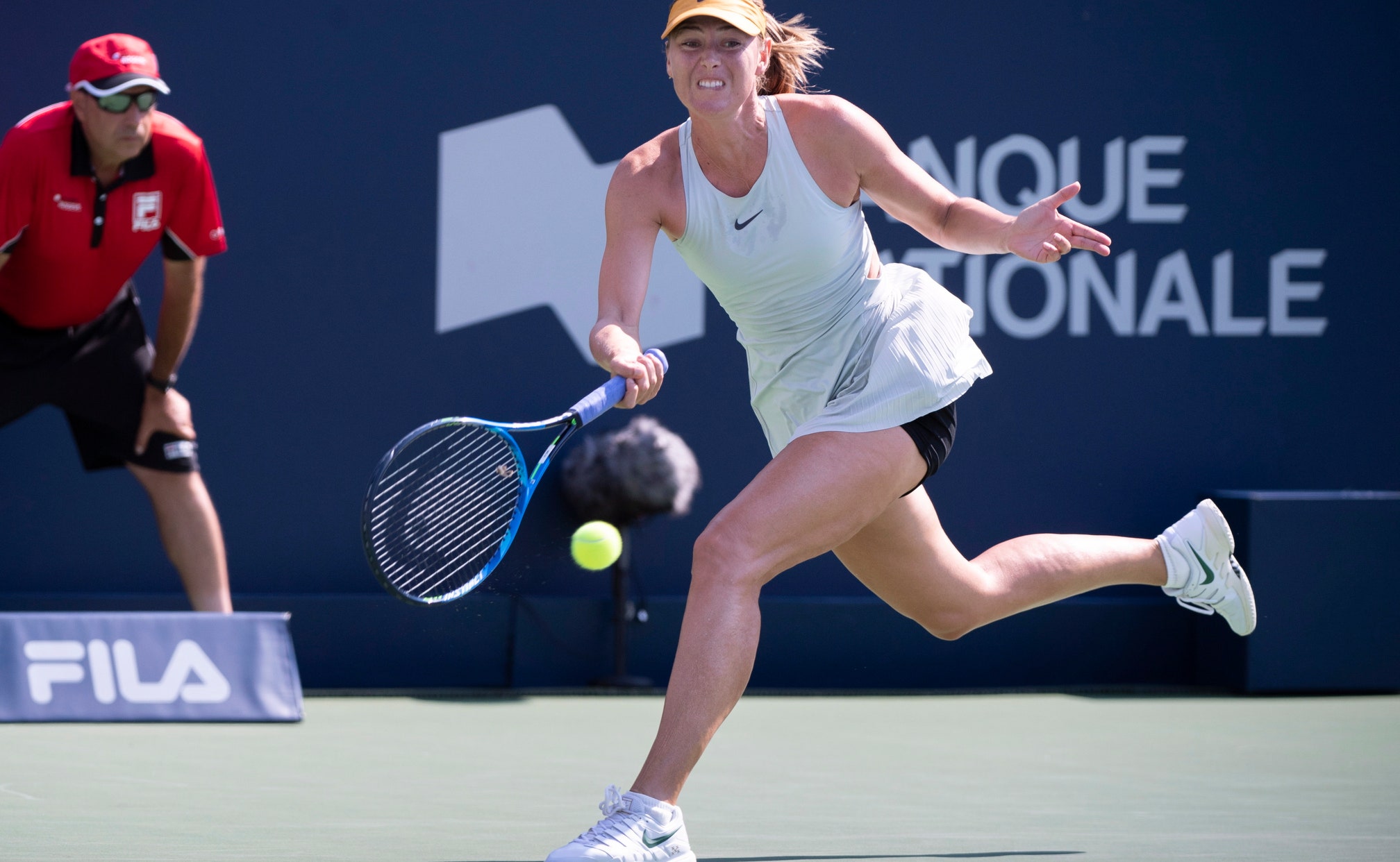 MONTREAL (AP) — Maria Sharapova advanced to the second round of the Rogers Cup with a 6-1, 6-2 victory over qualifier Sesil Karatantcheva of Bulgaria on Tuesday.

Play resumed under the afternoon sun with Sharapova leading 4-1 in the first set after heavy rain and lightning forced organizers to suspend the match late Monday following a three-hour rain delay.

Sharapova, making her first Rogers Cup appearance since 2014, picked up where she left off Monday. She won six straight games after the restart and needed only 36 minutes to win the second set.

The 31-year-old had three aces and only committed two double faults to her opponent's 11.

"Would have loved to finish last night to get a break today, but that's not how things work," Sharapova said. "You have to adjust. I think I did a good job of finishing the job today."

The Russian is 5-0 all time against the 229th-ranked Karatantcheva, who was playing in her first WTA main draw in more than a year.

Sharapova, ranked 22nd in the world, will face Daria Kasatkina of Russia (No. 12) in the second round.

Canada's Eugenie Bouchard is out after a 6-2, 6-4 first-round loss to Elise Mertens of Belgium.

The 129th-ranked Bouchard lost the match in 1 hour, 34 minutes in front of her hometown fans as she dropped to 4-11 all time at the Rogers Cup.

"I didn't start well at all today," said Bouchard, who also lost in the first round at the Rogers Cup last year. "Against a top-20 player you have to be firing on all cylinders and doing everything well. Not a lot went well today for me. My backhand just wasn't there and I missed a lot of first service points. Plus my toe was hurting.

"At the end of the day, I didn't deserve to win this match because I didn't play good enough tennis."

The Westmount, Quebec, native started the match poorly. She was broken three times and dropped the first five games of the first set.

The 24-year-old showed signs of life though, winning back-to-back games in the first set before losing 6-2. She started the second set by winning her first three games.

Leading 3-0 in the second set, Bouchard called a medical timeout to deal with a blister on her toe that she says has been bothering her for a couple of months now.

When play resumed, Mertens went on to win the next five games on her way to victory.

The 15th-ranked Mertens, who is making her Rogers Cup debut, will now face Shuai Zhang of China (No. 32) in the second round.

Bouchard has not beaten a top-20 player since defeating Angelique Kerber at the Madrid Open in May 2017.

Ostapenko, the 11th seed in Montreal, committed 10 double faults while struggling with her serve as she was eliminated in the first round at the Rogers Cup for the third straight year.

"Because of the back and forth in that first set, after that what I did well was I settled down," said Konta, the former world No. 4. "I played myself into the match and tried to be as tough as possible.

"She has such a big game, so many big shots, sometimes you are spectator out there. When I had the opportunity to do the most I could, stay strong, I think I built up enough momentum. That's why I was able to keep pushing through in the second and third."

In other early matches, Kiki Bertens of the Netherlands made quick work of Carol Zhao of Canada, winning 6-1, 6-2 while world No. 8 Petra Kvitova outlasted Anett Kontaveit of Estonia 6-3, 6-4.

In the evening session, wild card Victoria Azarenka defeated France's Kristina Mladenovic 6-0, 6-1 in less than an hour while world No. 6 Caroline Garcia avoided an upset as she defeated Magdalena Rybarikova of Slovakia 4-6, 6-1, 6-3.

In the final match of the day, Montreal's Francoise Abanda became the last Canadian standing when she upset qualifier Kirsten Flipkens (No. 47) of Belgium 6-3, 6-2.

The 21-year-old Abanda (No. 191) will face third seed Sloane Stephens in the second round on Wednesday.