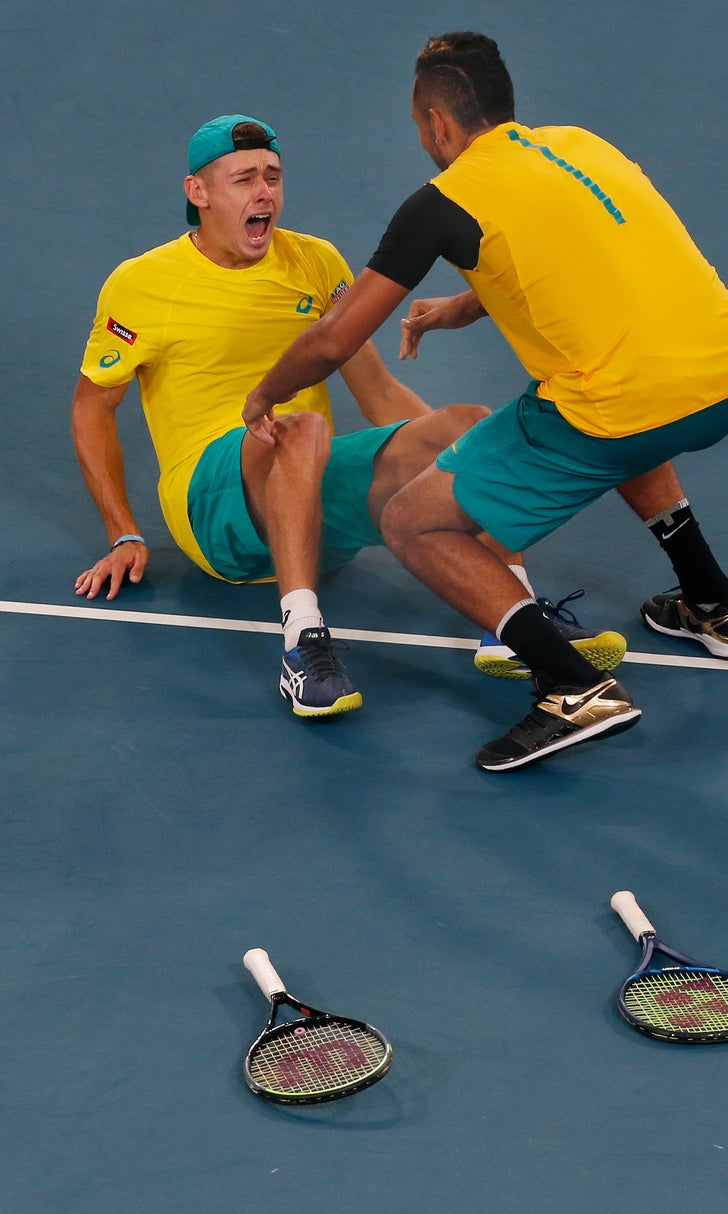 SYDNEY (AP) — Daniil Medvedev was docked a point for twice banging the umpire's chair with his racket in a heated second set before he recovered to secure Russia's semifinal spot at the ATP Cup with a win over Argentine opponent Diego Schwartzman.

The fourth-ranked Medvedev blamed the meltdown on jet lag from Russia's cross-continental journey from Perth to Sydney — including an overnight stop in Melbourne — between the group stage and the quarterfinals.

He said he expected to get a fine for the code violation but otherwise was satisfied to win the “super tough match” 6-4, 4-6, 6-3 on Thursday to secure Russia's win over Argentina. Karen Khachanov had given Russia the lead when he beat Guido Pella 6-2, 7-6 (4). Russia completed a 3-0 sweep with victory in the doubles.

“I didn't have anything near me to hit at than the chair ... so just hit one thing with the racket,” he said. “I got a code violation which I deserve — the second one is no question. Then we moved on.”

There were some other positives, Medvedev said, listing the fact that the he didn't damage the chair, injure anybody or break his racket when he hit Mohamed Lahyani's chair in a heated exchange after dropping serve in the seventh game of the second set.

The Russians spent the afternoon watching the broadcast of Australia's 2-1 win over Britain in the first of the quarterfinals, when Alex de Minaur and Nick Kyrgios combined to edge Jamie Murray and Joe Salisbury 3-6, 6-3, 18-16 on their fifth match point.

The tension in the Russia-Argentina match started after Medvedev won the first set. He had set point on serve but was broken in a game lasting 8½ minutes. He broke back to win the set but then exchanged words with Schwartzman as both players went to their team zones at each end of the court.

Lahyani got out of his umpire's chair to get between the players, and later gave Medvedev a code violation for unsporting conduct for persisting with the verbal exchange.

Seven games later, Medvedev approached the chair to get clarification on the code violation. He tapped the umpire's chair with the racket and was warned for it, and then hit again and got a point penalty, meaning Schwartzman started the next game with a 15-0 lead.

Medvedev said he got the second code violation for arguing about the first one, “because I didn't hear it."

Schwartzman held on to his break and leveled the match on his fifth set point. But Medvedev, who lost an almost five-hour U.S. Open final to Nadal last year, regained his composure in the third set, cut down his errors and got the vital break in the eighth game.

“It was important for him to stay mentally strong," Safin said. “You have to be smart, and sometimes squeeze yourself together and maintain self calm."

Medvedev won all his singles matches as Russia swept three group games in Perth, but had a tougher time against Schwartzman, who produced the win against Croatia on Wednesday in Sydney that propelled Argentina into the quarterfinals.

Now the Russians will meet the winner of Friday's quarterfinal between Serbia and Canada.

Australia will play either Spain or Belgium, progressing after team captain Lleyton Hewitt gambled on sending his two singles players back out for the doubles.

A euphoric Kyrgios lifted de Minaur over his shoulder and carried him off the court after the doubles win, then told the crowd he would celebrate with a red wine.

"It was unreal. The adrenaline has kind of worn off and I'm exhausted,” Kyrgios said. “But it was awesome. It was honestly — today was one of the best moments in my career, definitely.”

Australia's unbeaten run through the new team tournament has come at a time when the country needs some good news amid catastrophic wildfires that have claimed at least 26 lives since September, killed millions of animals and destroyed more than 2,000 homes.

Britain almost ended it, having four match points in the doubles. The one that Murray won't forget was at 11-10, when he had an almost open court in front of him but somehow sent a backhand long.

“I missed that shot basically on top of the net, which was ridiculous,” Murray said. “That will hurt. I'll probably never miss it again in my career. But today I missed it, and that cost us.”