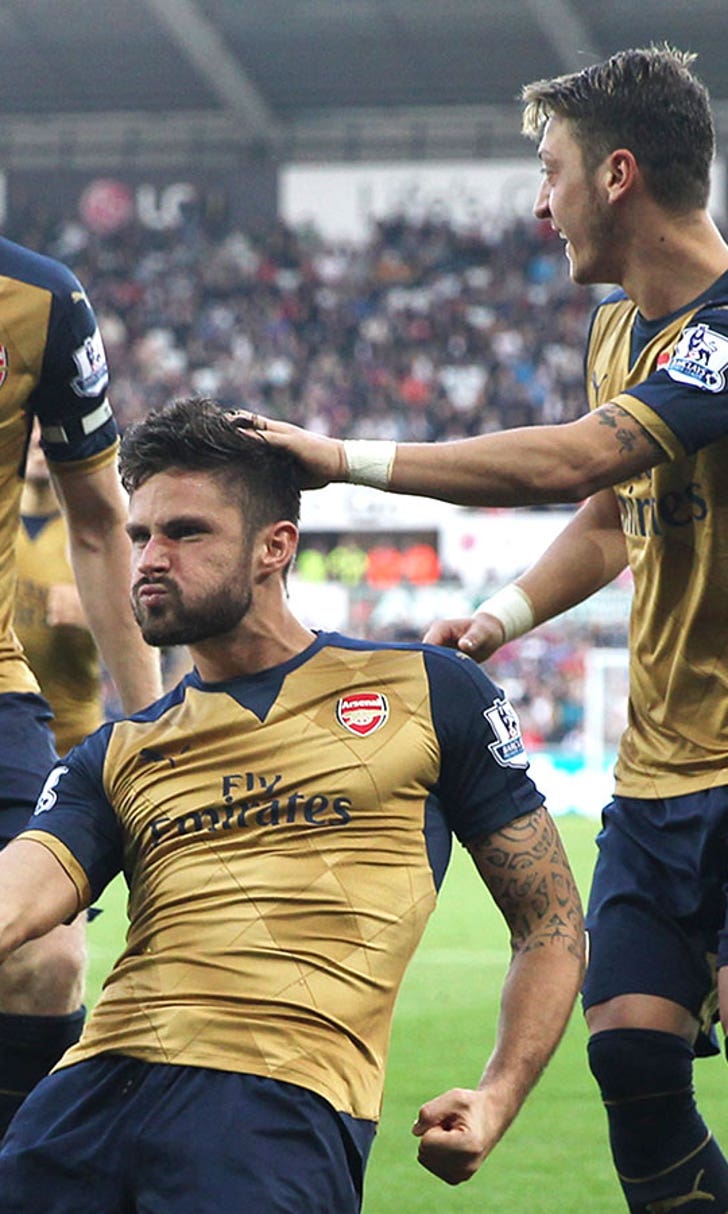 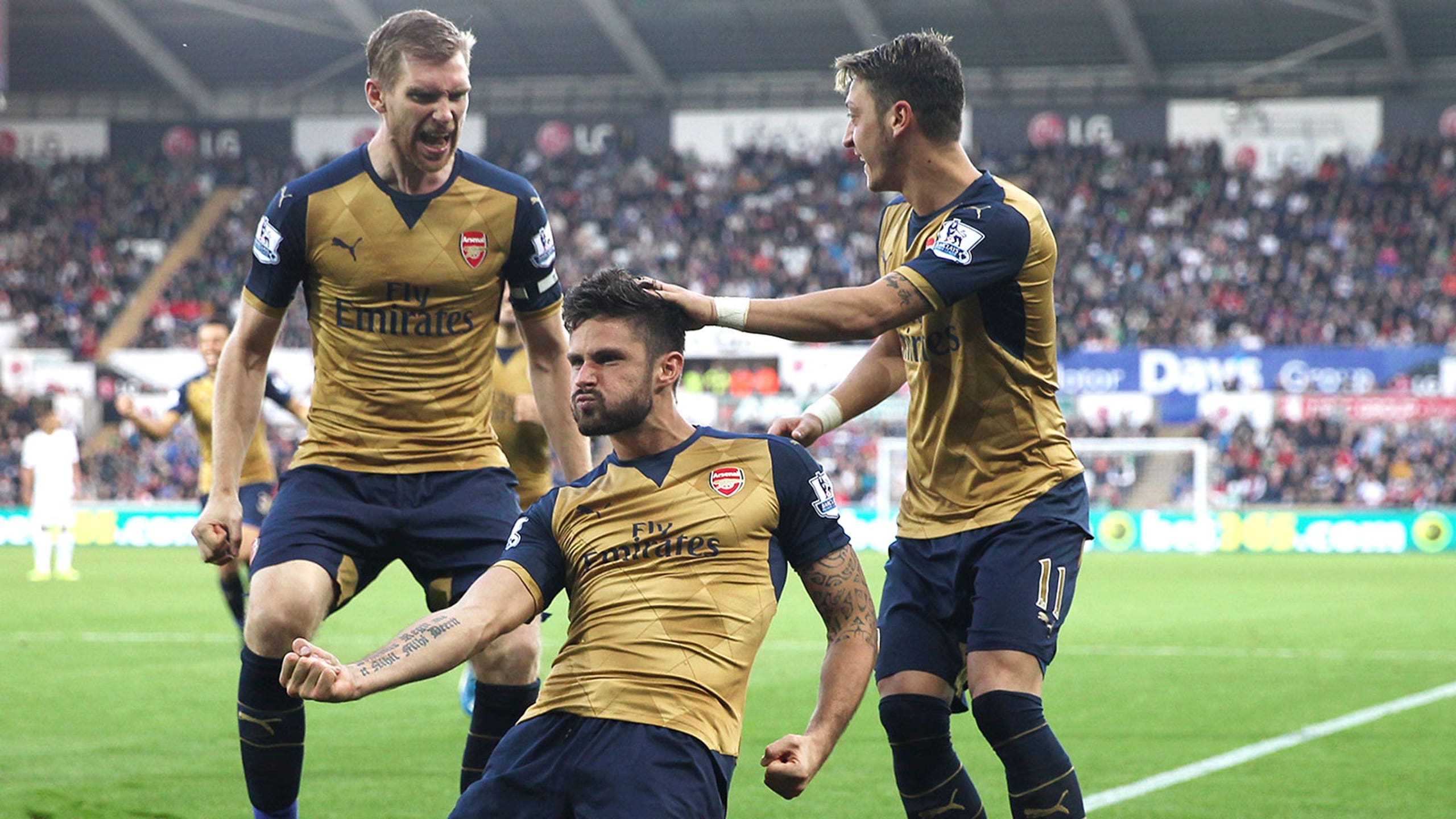 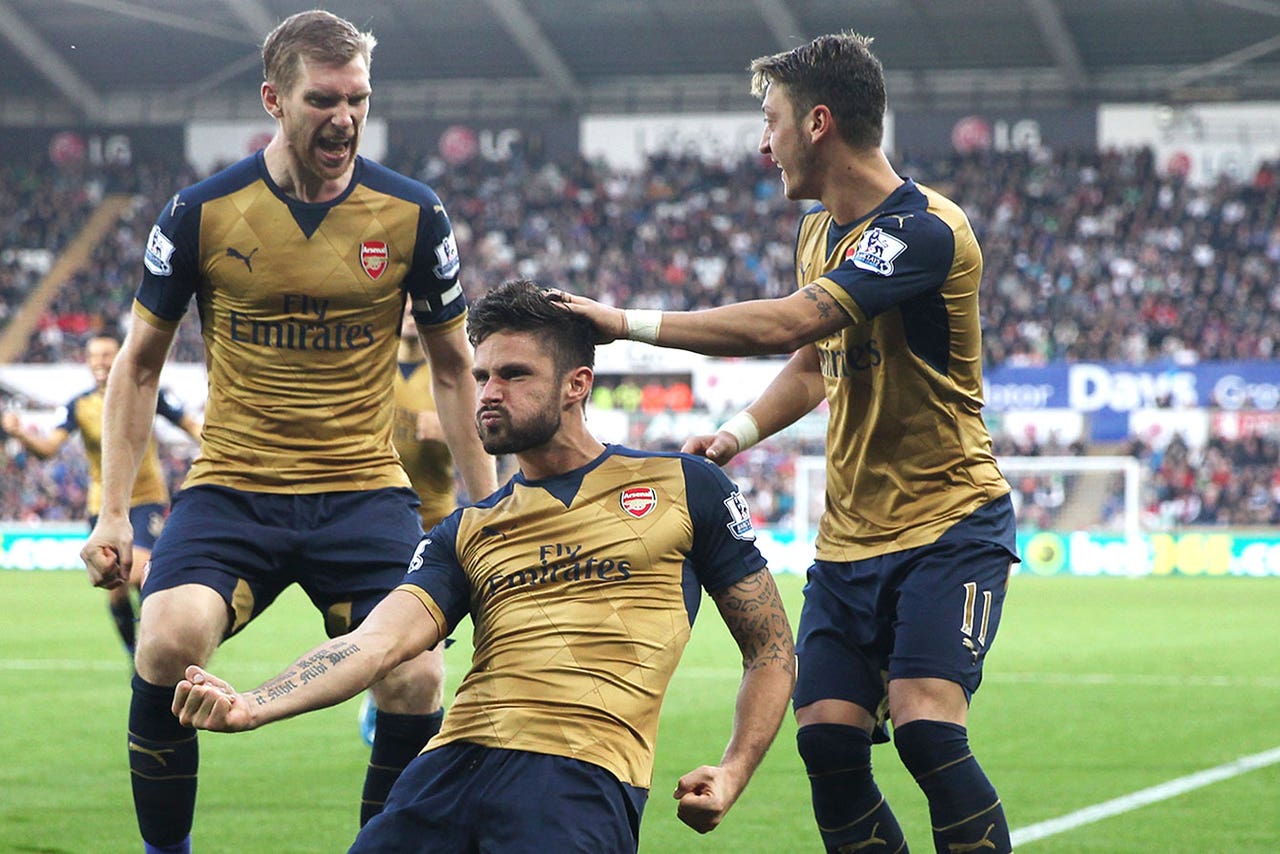 Good teams win even when they play poorly. Such was the case again today for Arsenal, who shook off a lousy start to cruise past Swansea 3-0 at the Liberty Saturday afternoon. Olivier Giroud, Laurent Koscielny and Joel Campbell all scored to keep Arsenal tied atop the table on points with Manchester City. The scoreline was probably cruel on the Welshmen, but their failure to take their chances doomed them against an unrelenting Arsenal attack in the second half.

Arsenal, missing Theo Walcott and Aaron Ramsey to injury, looked very thin on the bench and a bit cobbled together up top. Olivier Giroud was returned to the starting lineup but the loss of the speedy Walcott denied Mesut Ozil an outlet up top and for long stretches in the first half the Gunners simply looked slow and tired.

Swansea, on the other hand, had good looks and real chances in front of the net. They just failed to take them. Against a backdrop of rising pressure on manager Garry Monk, Swansea seemed short of confidence up top even when presented with gifts. No player summed that up today more that Bafetimbi Gomis: short of both self-assurance and goals, Gomis was guilty of squandering a gorgeous chance that should have put Swansea on easy street.

Jonjo Shelvey popped a great ball from midfield through to Gomis in the 21st minute, and he was allowed to run in alone on Petr Cech. For reasons unknown to anyone but him, however, Gomis slowed down and allowed Cech to make a play on the ball. Hector Bellerin raced back and then nicked the ball right off Gomis' laces, to groans from the crowd. It was a terrible waste, and Gomis expression -- nervous and fearful -- spoke volumes.

Gomis had a chance to redeem himself five minutes later, with a far harder chance -- but again failed. Bellerin was beat by Jefferson Montero out wide, and his cross was right to Gomis' head, but Cech stood him up with a fine save.

Giroud really didn't come into the game, only popping up once in the 28th minute with a half-volley that went over the bar. Alexis had served in a fine ball, but Giroud rushed the attempt.

The second half was far more engaging. In the 48th minute, Alexis fired in a corner -- Arsenal's first of the game, as it happened -- and Giroud was able to lose his marker and nod the ball in at the near post. It was a fine goal but shocking defending from the Welsh side, who seemed to go to sleep on the corner and allowed Arsenal's target man to drift right in. Giroud's goal also marked the 2,000th scored for Arsenal under Arsene Wenger.

Swansea tried to find an immediate response with Cech forced to make two good stops in succession on Andre Ayew and Gylfi Sigurdsson, the latter a great save off a medium-range strike that by rights should have been in the back of the net. But for all their huff and puff, Swansea rarely looked like actually scoring. Too often Gomis was offside, and too often promising plays were allowed to fizzle out.

The hammer dropped twenty minutes later on a somewhat controversial play. Lukasz Fabianski, a one-time Arsenal goalkeeper, went up for a high ball under pressure for Koscielny. With referee Kevin Friend in a perfect position, Fabianski went over Koscielny but did not collect the ball on the catch. Koscielny simply chested the ball down, turned and fired it into the unguarded net.

Campbell then scored his first goal for the Gunners on his first Premier League start, slamming home the ball from close range in the 73rd minute. Arsenal showed great movement around the area, and when the ball fell to Campbell on the far side of the area, he smartly pinged it through traffic and inside the far post.

Arsenal now face a tough test midweek against Bayern Munich with six players likely absent for the match. Swansea, still bobbing about in the lower half of the table, have two very winnable matches on the horizon against Norwich and Bournemouth.