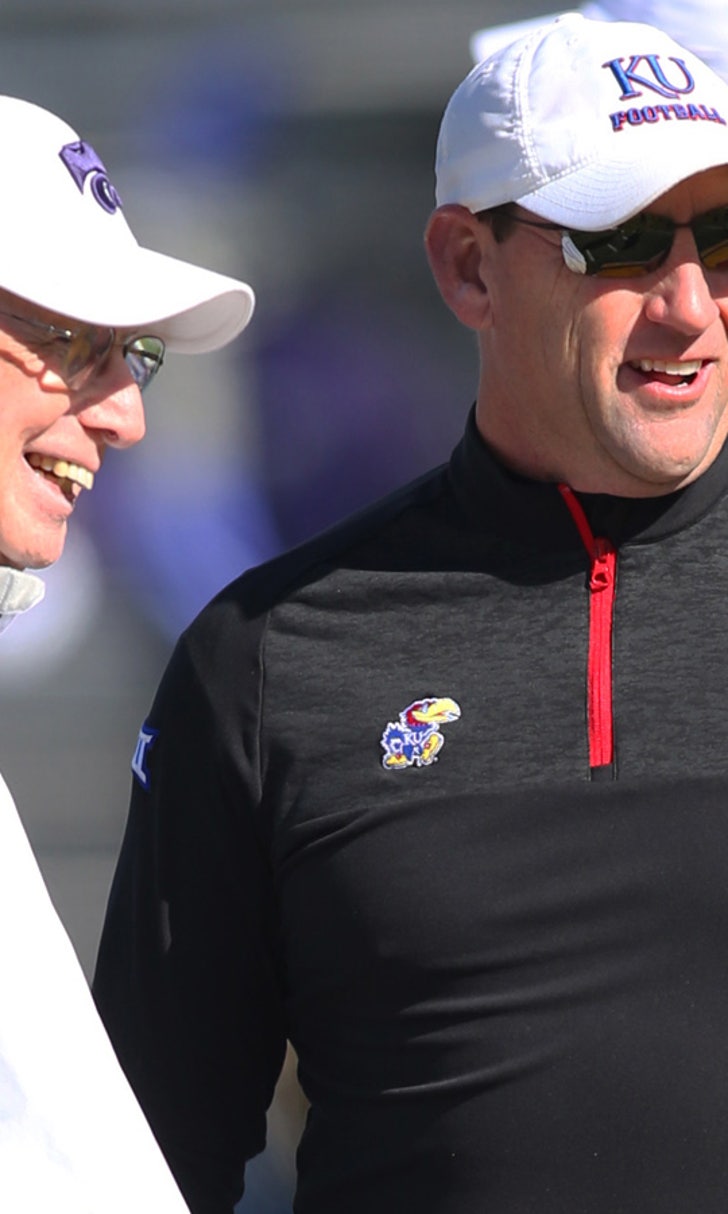 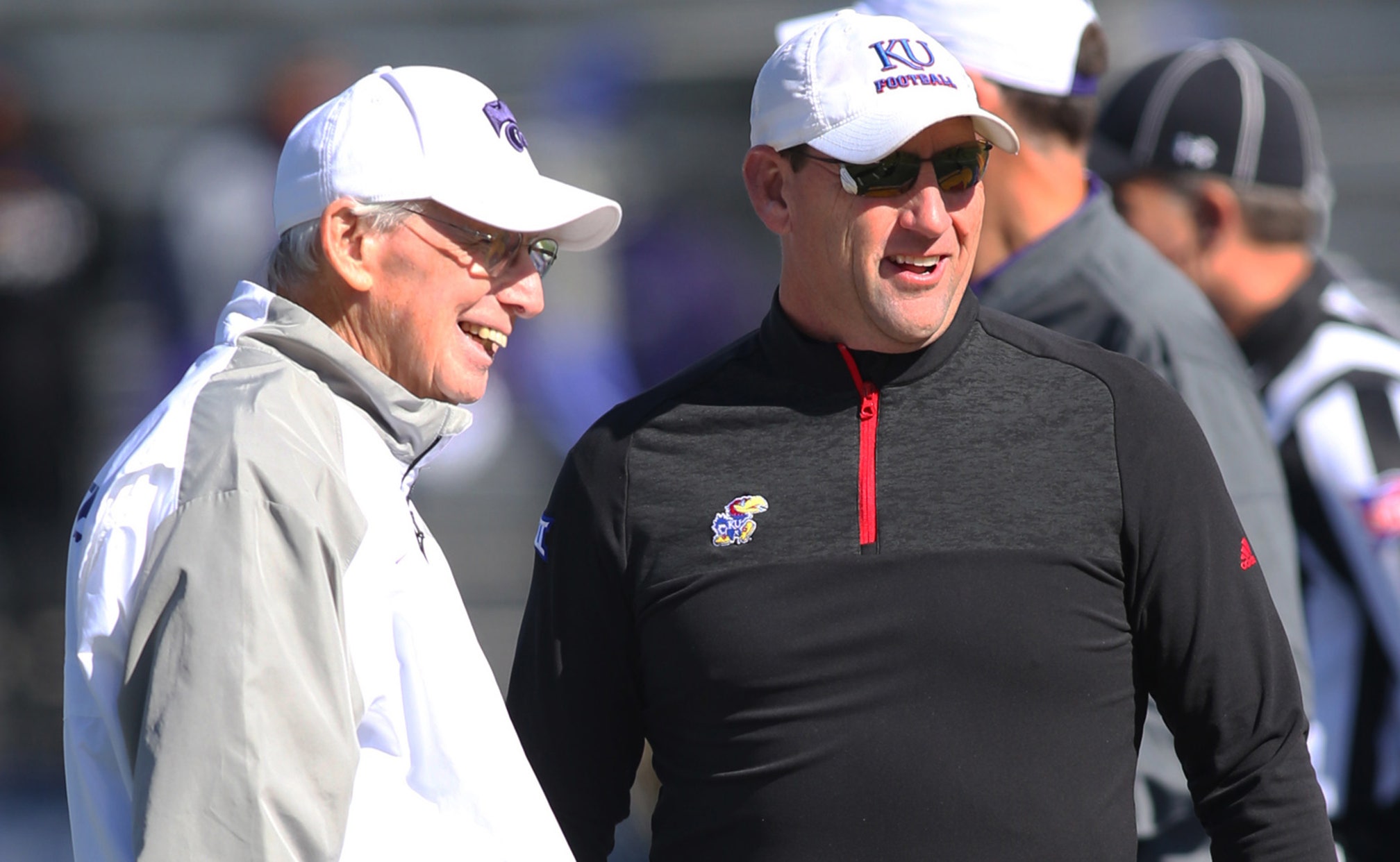 With Beaty already out, Snyder could be next as KU and K-State face off 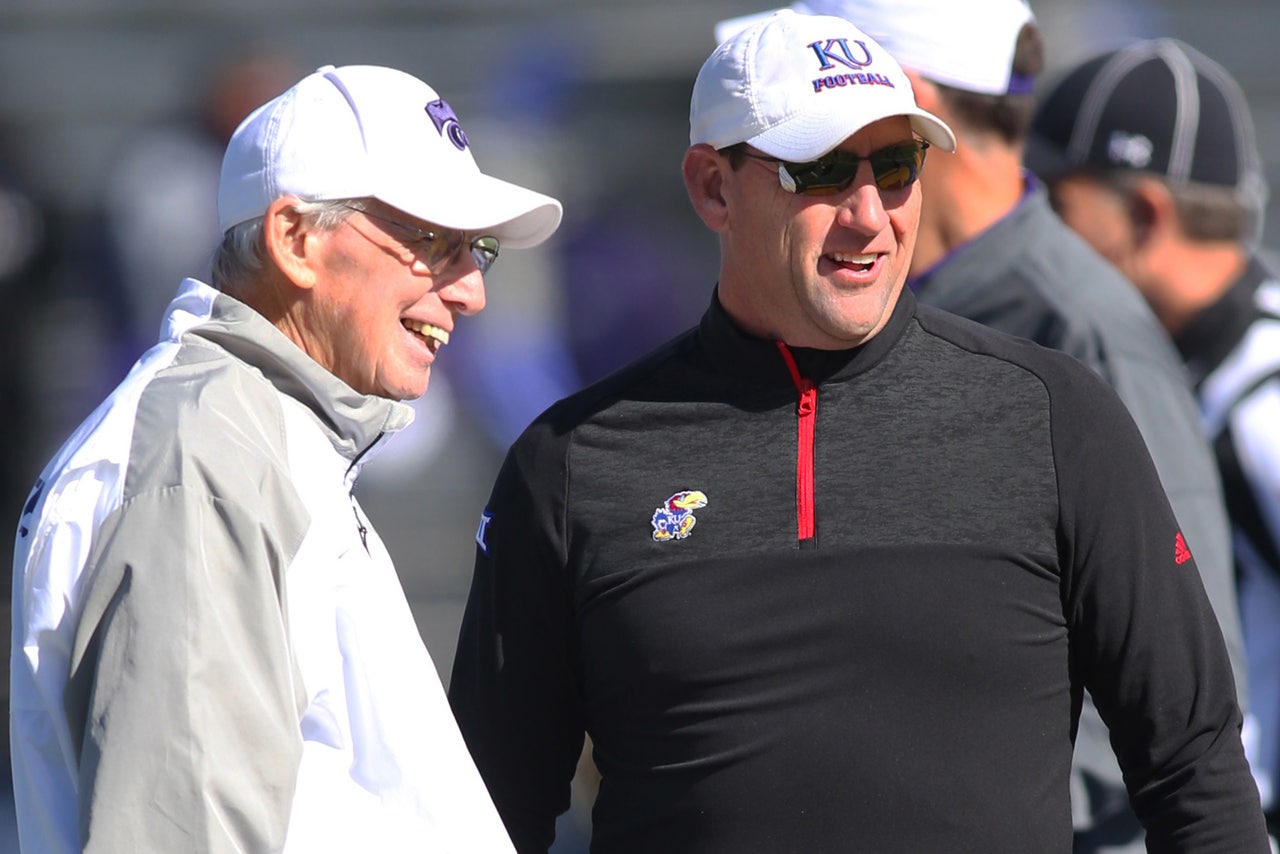 MANHATTAN, Kan. — Kansas already knows that David Beaty will be on the sideline for his final Sunflower Showdown when the perpetually rebuilding Jayhawks visit Kansas State on Saturday.

What nobody knows is whether Bill Snyder will also be coaching against Kansas for the final time.

Beaty was fired by athletic director Jeff Long on Sunday after a blowout loss to Iowa State left him 6-39 in three-plus seasons. The search for a replacement is under way even as Beaty continues to lead the Jayhawks (3-6, 1-5 Big 12) through their final three games.

The 79-year-old Snyder's future has also come into question after the Wildcats (3-6, 1-5) lost a nail-biter to TCU. Snyder insisted this week that he doesn't listen to outside chatter, but those close to the program wonder whether this disappointing season might well be his last.

"I would imagine people are upset about the fact that we are whatever our record happens to be," Snyder said. "The most significant thing is what takes place in this vicinity, how players are responding. What we as coaches can do and how we can right the ship. How we can get the team back to being as competitive as we can be."

The Wildcats have had bright spots, including a blowout win over Oklahoma State. But they were also routed by Oklahoma and Mississippi State while struggling to beat lower-division South Dakota.

"All you can do is look forward," Kansas State wide receiver Zach Reuter said. "Focusing on what could have been does nothing."

That is the same approach the Jayhawks are taking.

Beaty acknowledged this week the challenge in keeping his team motivated knowing that he would soon be replaced. But he also insisted that he owed it to his players to stick with them through the end of the season, and that's why he accepted Long's offer to do so.

"It's going to be one of the funnest games that we get to play in," Beaty said. "I know our guys are really excited about it, and we simply will not allow any distractions to come into our view. Everything that we have and want is still right in front of us, and we expect to get those things accomplished starting with this week."

By that, Beaty means become bowl-eligible. Both teams need to win to keep that faint hope alive.

Despite losing records, the Sunflower Showdown remains meaningful to those players on both rosters from Kansas.

"It's huge," said Jayhawks linebacker Joe Dineen Jr. "You grow up in Lawrence and it's K-State, and you don't like K-State very much. That's just kind of how it goes. I had a few buddies that were K-State fans and on days like Saturday, you weren't friends with them, and stuff like that. It's a real rivalry. It's a lot of fun to play in."

Kansas safety Mike Lee delivered a jarring shot to Kansas State running back Alex Barnes when the teams met previously, and it's safe to say they haven't made up.

"We had a little argument (on Twitter), back-and-forth," Lee said. "I know he don't like me and — I'm not going to say I don't like him. Just the game of football."

Kansas State cornerback Duke Shelley, who had missed the last two games with an injury, is facing internal discipline after he was arrested this week for traffic violations. Shelley had been the Wildcats' best defensive back with 33 tackles and three picks before his injury.

Both teams have shuffled quarterbacks much of the season but both pictures have cleared up. The Jayhawks appear intent on finishing the season behind Peyton Bender, and the Wildcats are relying on Alex Delton after an injury to Skylar Thompson.

"He's a threat with his feet," Jayhawks defensive tackle Daniel Wise said. "Our goal is to keep him in the pocket."

Kansas State's offense has at times looked dominant and disastrous, and offensive lineman Adam Holtorf said that may be his biggest disappointment.

"When you look at the tape," he said, "that's something that's plagued us all year. Speaking from an O-line standpoint, guys take turns messing up, one here, one there. At the end of the day, those add up and really hurt."