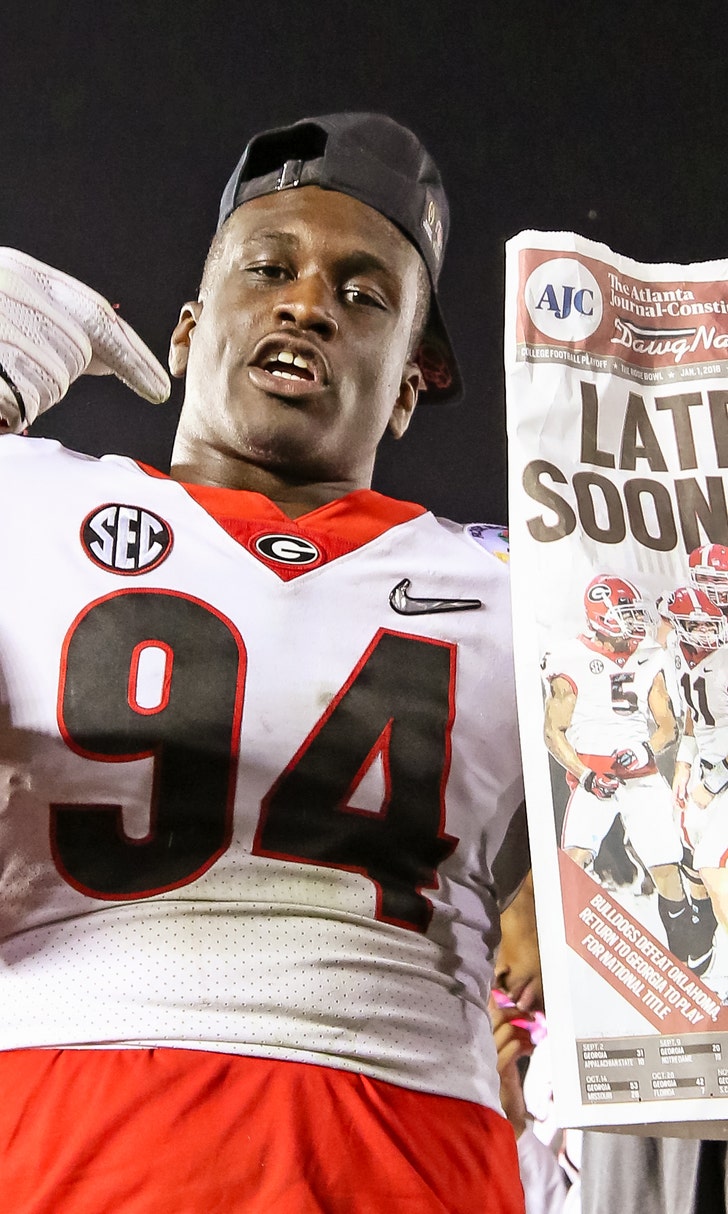 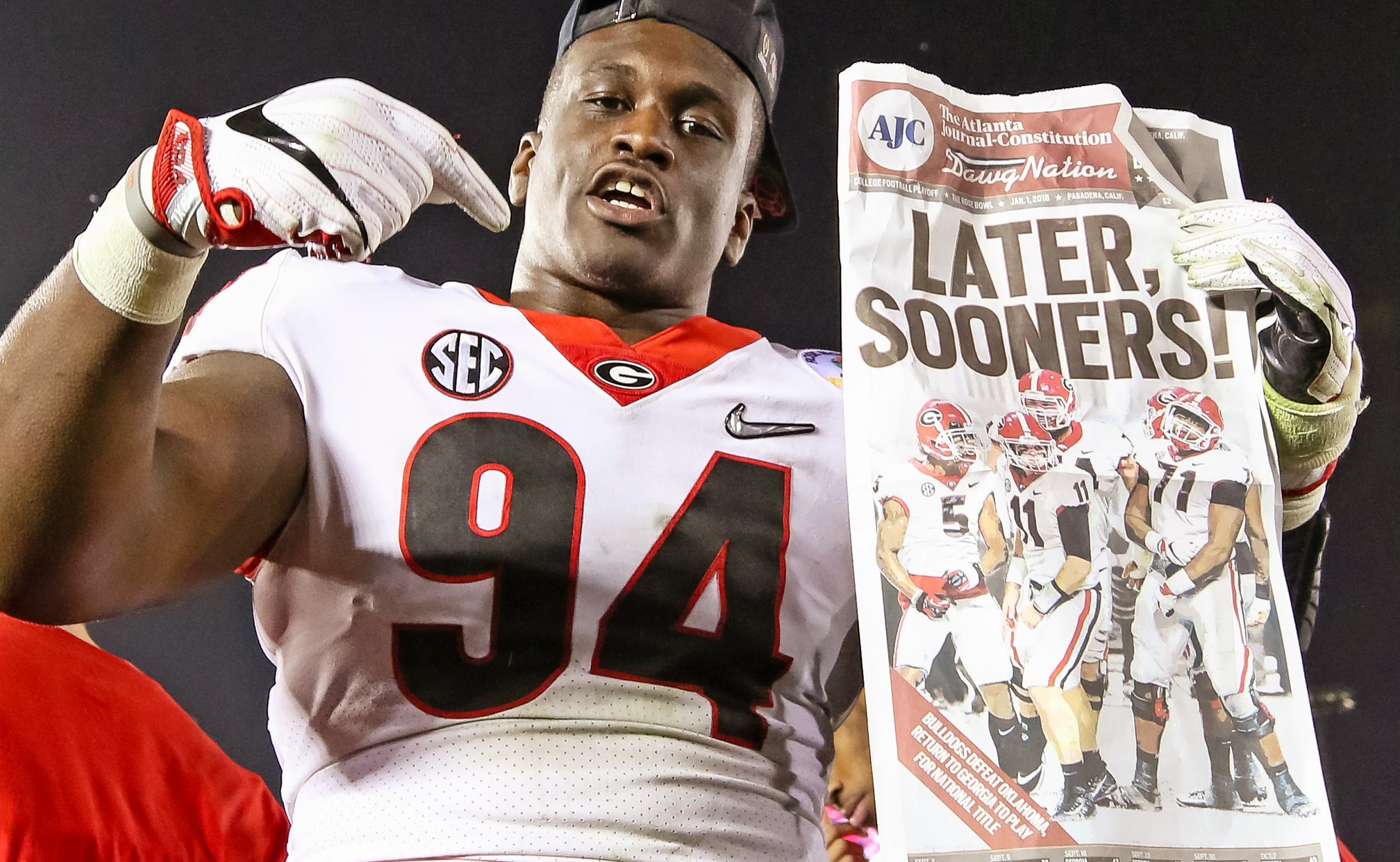 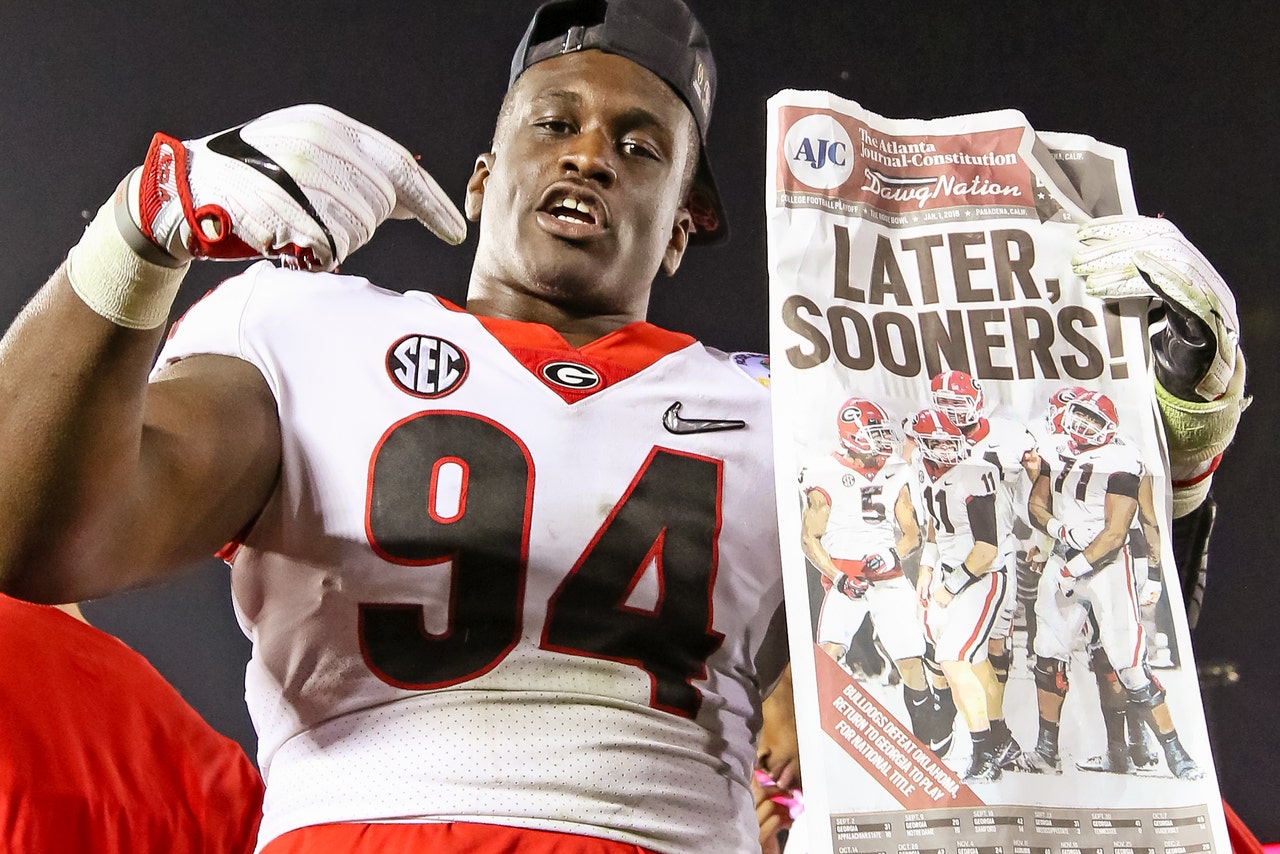 PASADENA, Calif. (AP) Sony Michel burst through the line for a 27-yard touchdown run to give No. 3 Georgia a 54-48 victory Monday night against No. 2 Oklahoma, winning the first overtime Rose Bowl and sending the Bulldogs to the College Football Playoff championship game.

Michel, who had a fumble in the fourth quarter returned for a go-ahead Oklahoma touchdown, ran for 181 yards and three scores for the Bulldogs (13-1), but none bigger than the last one in the second overtime.

"I made plays. I gave up plays. My team just had faith in me," said Michel, who did all that damage on just 11 carries. "That's what this team is all about. They showed true character today."

In the final game of one of the great college careers, Oklahoma’s Baker Mayfield threw for 287 yards and two touchdowns, and caught a touchdown pass that gave the Sooners a 17-point lead with 6 seconds left in the first half.

But the Heisman Trophy winner could not get the Sooners into the end zone in the first overtime when a touchdown would have ended the game.

The Bulldogs will play either Alabama or Clemson on Jan. 8 for the national championship in Atlanta, about 90 miles from their campus — with a chance to win their first national title since 1980.

"We got to get back to work. It's not done," Michel said. "Now we got to finish. Let's just finish this season off right."

The first overtime Rose Bowl was also the highest scoring, surpassing last year’s 52-49 USC victory against Penn State. There was a lot more on the line in this one, which will go down as one of the greatest Granddaddies of Them All.

After an offside penalty on Georgia gave Oklahoma a first down on third-and-five in the second OT possession, the Sooners stalled again and Austin Seibert came out for a 27-yard field goal. Leaping through the line, Lorenzo Carter got his outstretched hand on the kick and the ball fluttered down short of the uprights.

Any score would have ended it for the Bulldogs, and on the second play Michel slipped one tackle and was home free. The Bulldogs sprinted off the sideline and toward the corner of the end zone to mob Michel. Confetti rained down. Meanwhile, Mayfield stood motionless on the sideline for several seconds, bent over with his hands on his knees and head down. Mayfield battled flu-like symptoms the week leading into the game, but he played just fine.

"I can't believe it's over. It's been a wild ride," said Mayfield with a hoarse voice before he started to cry.

Michel and his running mate Nick Chubb were awesome for Georgia. Chubb ran for 145 yards and two touchdowns, including a 2-yarder on a direct snap with 55 seconds left in regulation to tie it.

Both teams settled for field goals in the first overtime, first Georgia’s Rodrigo Blankenship from 38 to make it 48-45.

Then it was Mayfield’s turn. A touchdown would have sent the Sooners to Atlanta, but on a third-and-2 from the 17 Georgia All-America linebacker Roquan Smith nailed Jordan Smallwood a yard short of the first down.

Seibert kicked a 33-yarder and the Bulldogs and Sooners played on, but not for much longer.

Georgia: The Bulldogs came in with the sixth-best defense in the country, but Mayfield and the Sooners sliced it up in the first half, including a nifty reverse pass to the Heisman Trophy-winning quarterback that made it 31-14 with 6 seconds left in the second quarter. Oklahoma had 360 yards in the first half, the second-most the Bulldogs had allowed in a game this season.

Coach Kirby Smart said the defense “stunk it up” in the first half, but there were no dramatic changes in the second. Smith and company just played better. Oklahoma managed only 171 yards and one touchdown in the second half and OT.

Oklahoma: The Sooners’ defense has been an issue all season, but it did look for a while like it might make the decisive play. Linebacker Caleb Kelly lowered a shoulder into Michel trying to turn the corner on a sweep and the ball popped loose. Steven Parker picked it up on the bounce, tight-roped the sideline and raced 46 yards for a touchdown to put the Sooners up 45-38 with 6:52 left in the fourth.

But with a chance to close out the game with 3:22 left in the fourth, Georgia freshman quarterback Jake Fromm led a game-tying drive, capped by Chubb’s TD run. Fromm finished 20-for-29 for 210 yards with two touchdowns and no interceptions.

Georgia: It’s back to Mercedes-Benz Stadium for the Bulldogs, where they won the Southeastern Conference championship to get to the playoff a month ago.