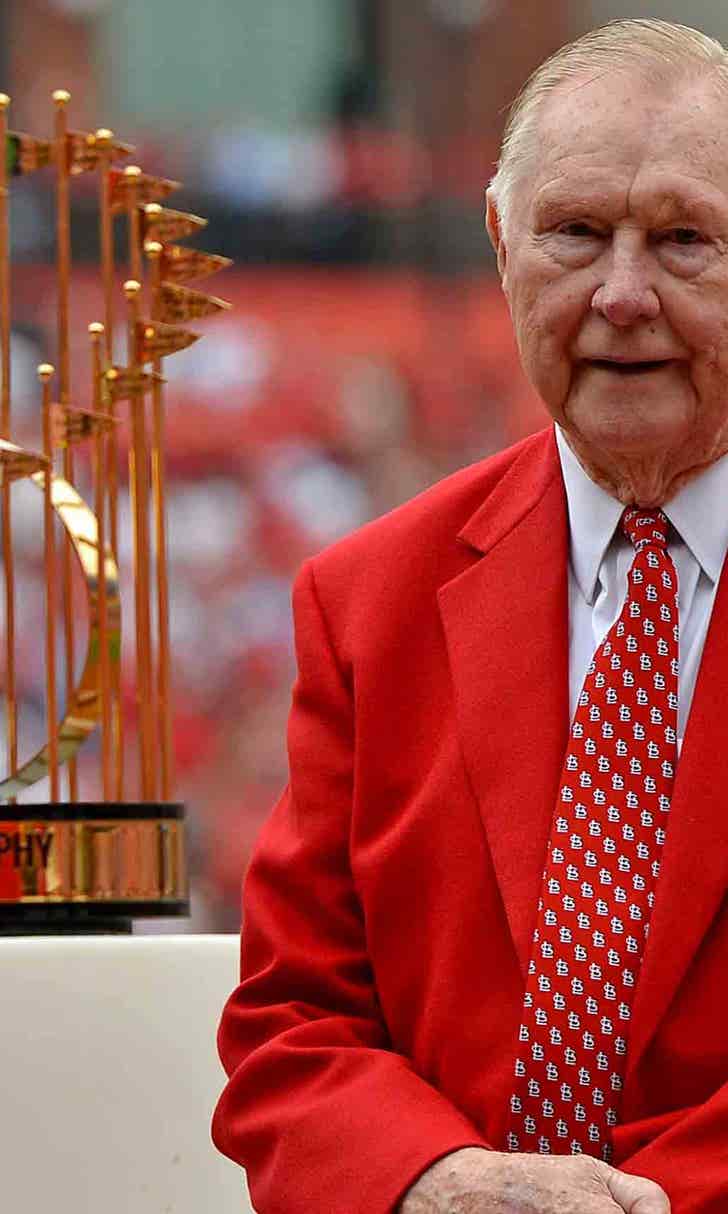 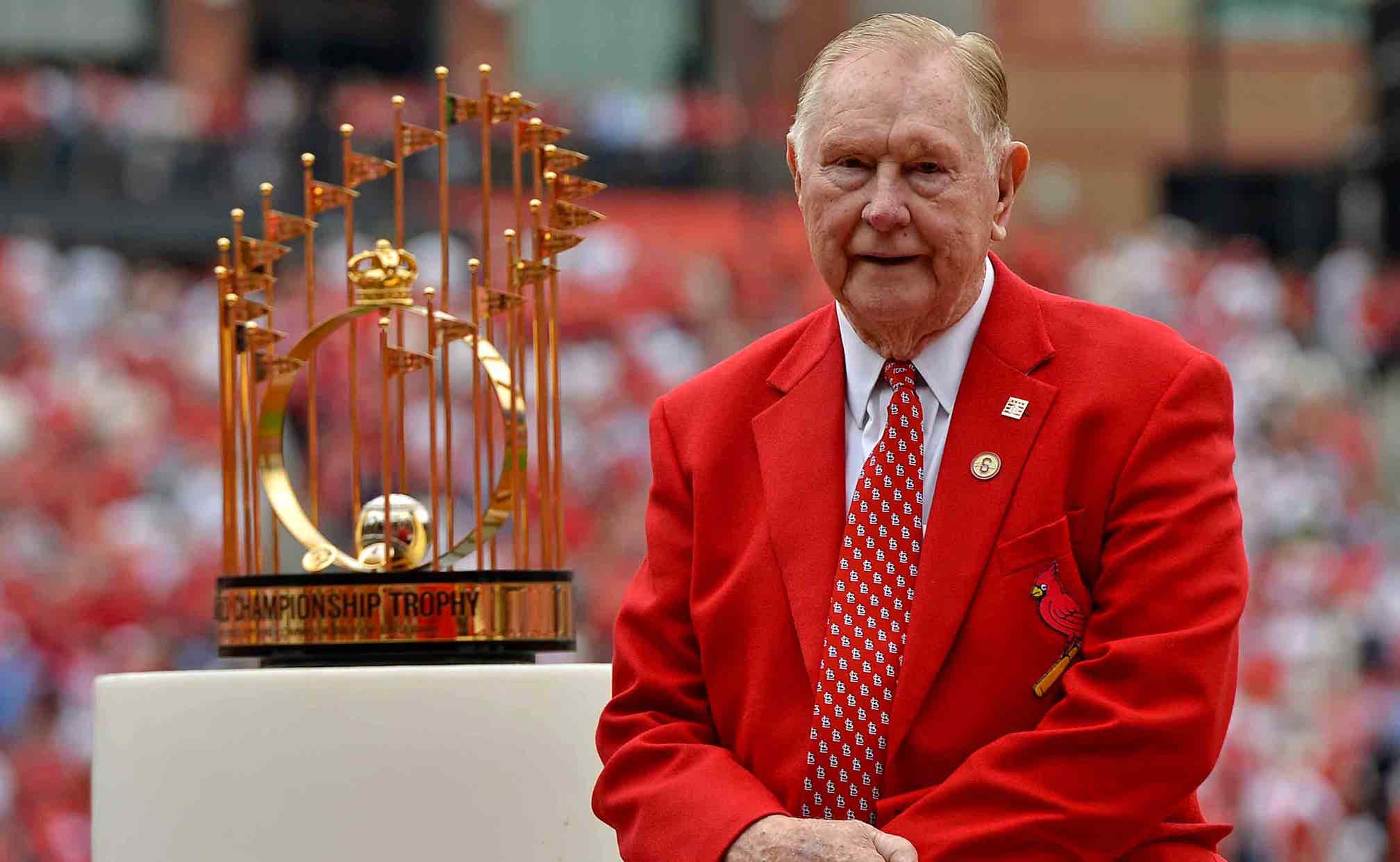 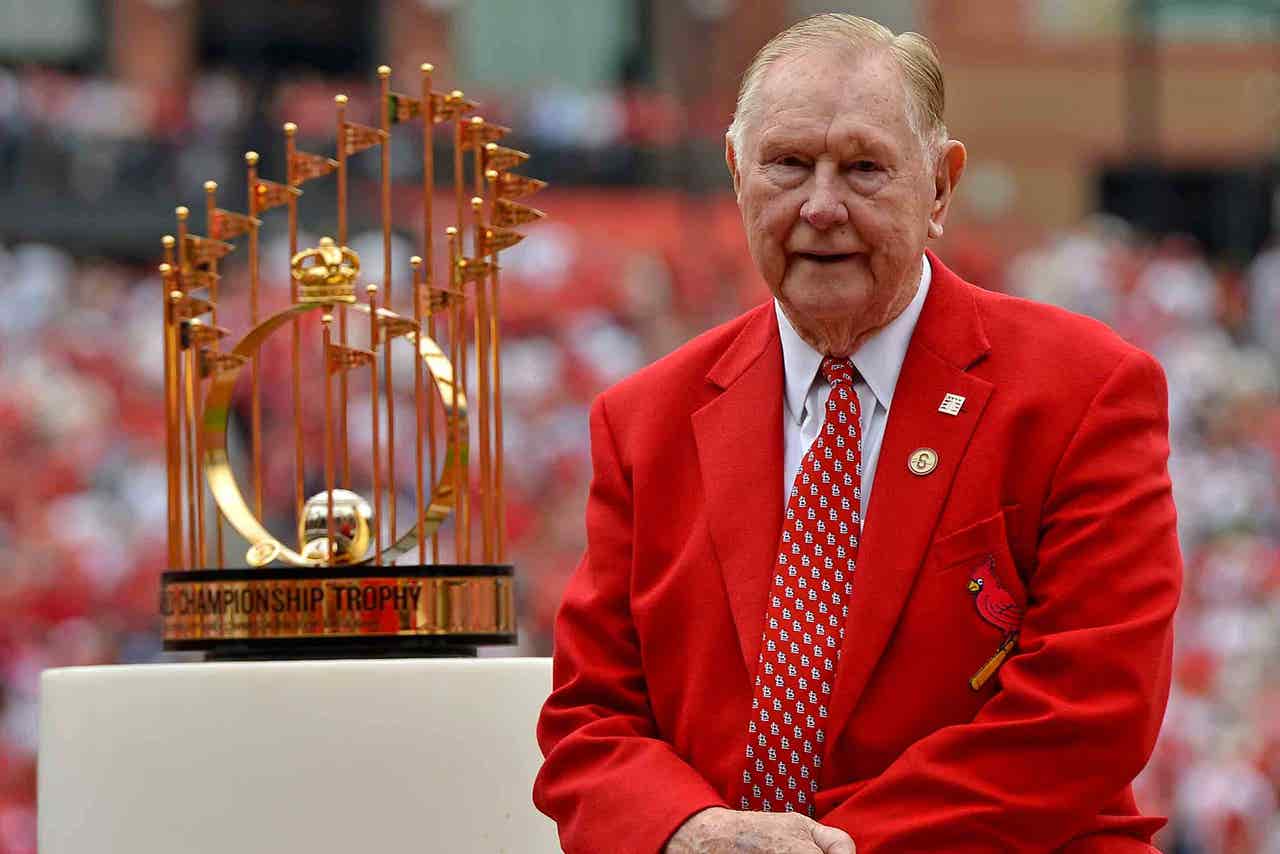 ST. LOUIS -- If there was ever anyone who lived his life The Cardinal Way, it was Red Schoendienst.

Right down to his ruby name. The team color, of course.

Schoendienst, the Hall of Fame second baseman who managed St. Louis to two pennants and a World Series championship in the 1960s, died Wednesday. He was 95.

The Cardinals announced Schoendienst's death before the third inning of their game against the Miami Marlins. A photo was shown on the video board with "1923-2018" written below. Fans gave a standing ovation, while players stood and applauded.

"Red Schoendienst was one of the most beloved figures in the rich history of the St. Louis Cardinals, the franchise he served for 67 years," Major League Baseball Commissioner Rob Manfred said in a statement. "He was a wonderful ambassador for our game."

Alfred Fred Schoendienst wore the Cardinals uniform for 45 seasons as a player, coach and manager, and remained involved with the team in later years as a special assistant to general manager Walt Jocketty. Into his 80s, Schoendienst hit fungos to fielders in pregame practice.

"Red was one of the greatest Cardinals of all time, and a beloved member of the Cardinals organization for over six decades," team owner William O. DeWitt Jr. said in a statement. "His influence on this organization cannot be overstated. Red was a great player, a great manager and a wonderful mentor to countless players, coaches and members of the front office. He was also a fan favorite who connected with millions of Cardinals fans across multiple generations. He will be sorely missed."

In the same statement, Schoendienst's family said he died surrounded by loved ones.

"He had a life full of happiness for 95 years. He inspired all that knew him to always do their best. Red was a great ball player, but his legacy is that of a great gentleman who had respect for all. He loved his family, friends, teammates, the community and his country. He will be greatly missed," his family said.

A 10-time All-Star with the Cardinals, Giants and Braves, Schoendienst was elected to the Hall of Fame in 1989 by the Veterans Committee. His best season was 1953, when he batted .342, second in the NL, with 15 home runs and 79 RBIs. He led the league with 200 hits in 1957. And on defense, he tied or topped the league in fielding seven times.

Schoendienst ranks second in Cardinals history with 1,041 wins as a manager. His No. 2 jersey was retired in 1996 and a bronze statue portraying Schoendienst in the air at second base, kicking up dust while pivoting to complete a double play, sits outside Busch Stadium.

"They made me better looking," the red-haired Schoendienst joked when the statue was unveiled in 1999.

Schoendienst's 12-year tenure as manager is the second-longest in franchise history behind Tony La Russa. Schoendienst also served as interim manager in 1980 and 1990, the latter stint after Whitey Herzog resigned, and coached for the Oakland Athletics in 1977 and '78.

When he signed his first professional contract in 1943, Schoendienst, of tiny Germantown, Illinois, gave himself four or five years to make his mark. He broke in with the Cardinals in 1945, filling in while Hall of Fame left fielder Stan Musial was serving in the U.S. Army. Schoendienst led the National League with 26 stolen bases that year, then moved to third base and shortstop before settling at second. He and Musial were roommates on the road for several years.

The switch-hitter batted .300 seven times, led the National League with 43 doubles in 1950 and appeared in three World Series, two with the Milwaukee Braves. In 1957 he was traded to Milwaukee in midseason and led the Braves to the pennant and a World Series win over the Yankees, finishing third in MVP voting. The Braves repeated as NL champs in 1958.

Schoendienst was a coach on the Cardinals' 1964 World Series championship team and replaced manager Johnny Keane the next season. Under Schoendienst's low-key leadership, the Cards won pennants in 1967 and 1968, with Hall of Fame pitcher Bob Gibson and speedster Lou Brock among the key players. St. Louis beat the Boston Red Sox in a seven-game World Series in 1967, but lost in seven the following year to the Detroit Tigers.

"Red was a teammate, manager and friend of some of the greatest players in the history of baseball," Manfred said.

In all, Schoendienst served as a player, manager or coach on four Cardinals teams that won the World Series.

"This was a very, very unique person," St. Louis manager Mike Matheny said. "His legacy on the field to me, what he was able to do, is really impressive. But for us to watch how he continued to give to this game is something we'll never forget and it puts him in a very rare class."

Schoendienst finished his career with a .289 batting average, 2,449 hits, 427 doubles, 1,223 runs and a .983 fielding percentage. He set a major league record with eight doubles in a three-game span.

He was a player or manager with the Cardinals from 1945-56 and from 1961-76, and served as a coach from 1979-95 before moving to the front office. That transition did not prevent him from suiting up on a routine basis to help out wherever he was needed.

"He didn't complicate things," said Devine, who died in 2006. "He was low-key, he related well to the players, and the players liked him because he left them alone."