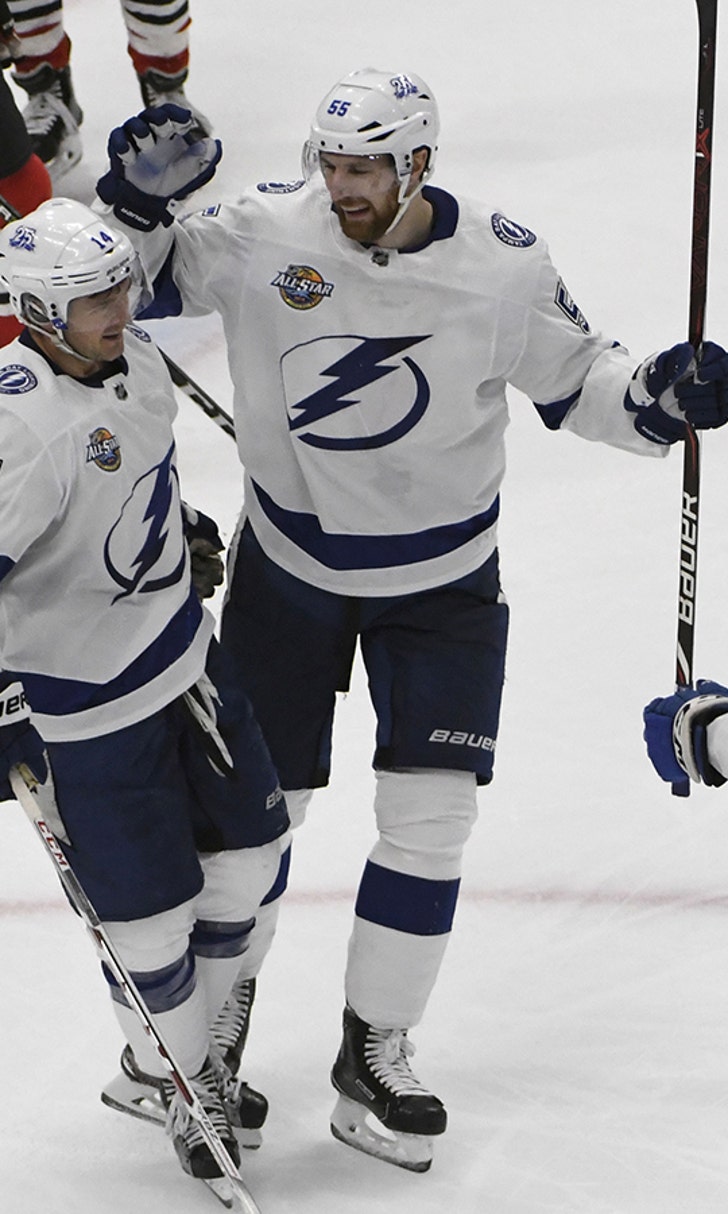 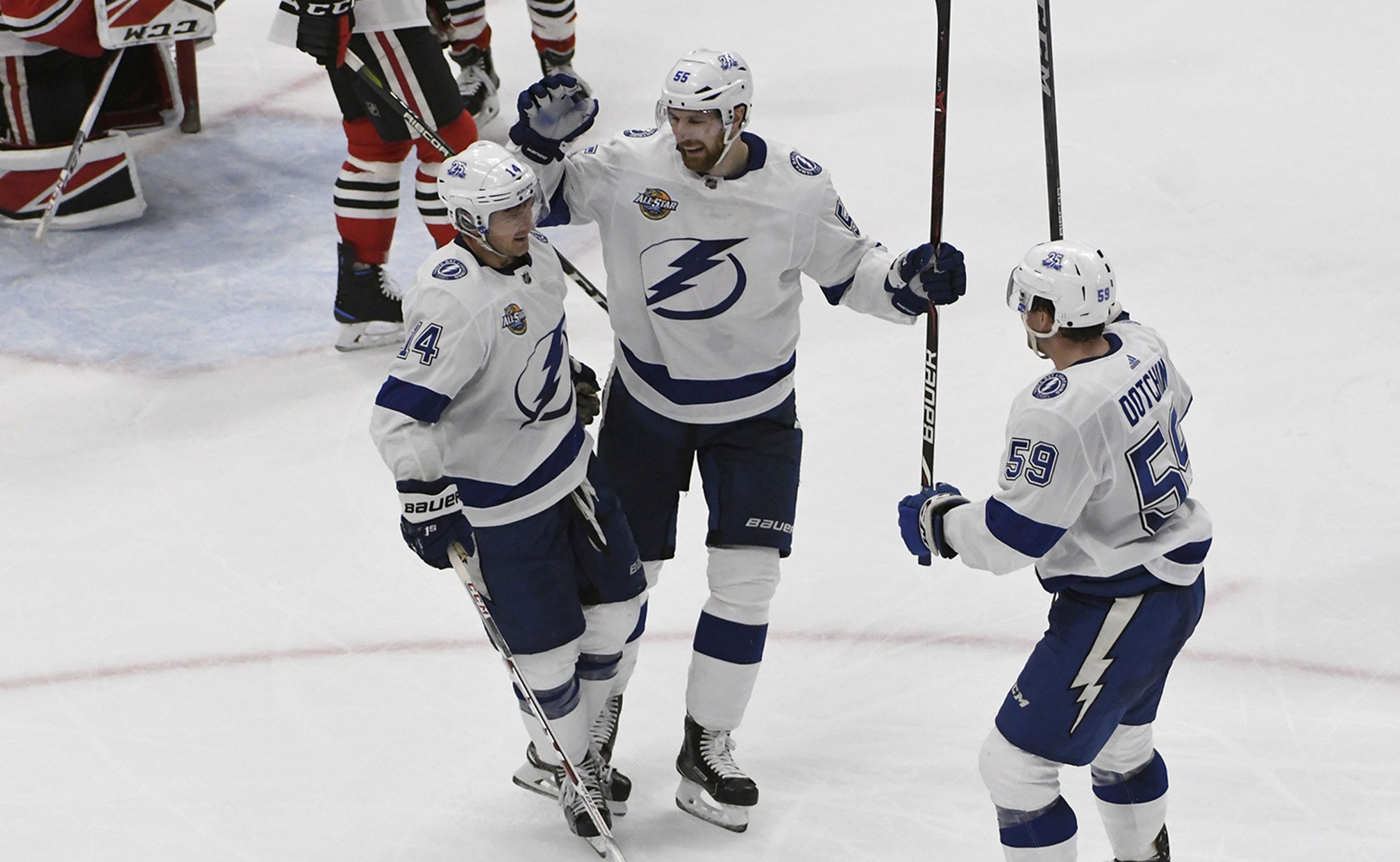 Lightning blank Blackhawks in Chicago to get back to winning ways 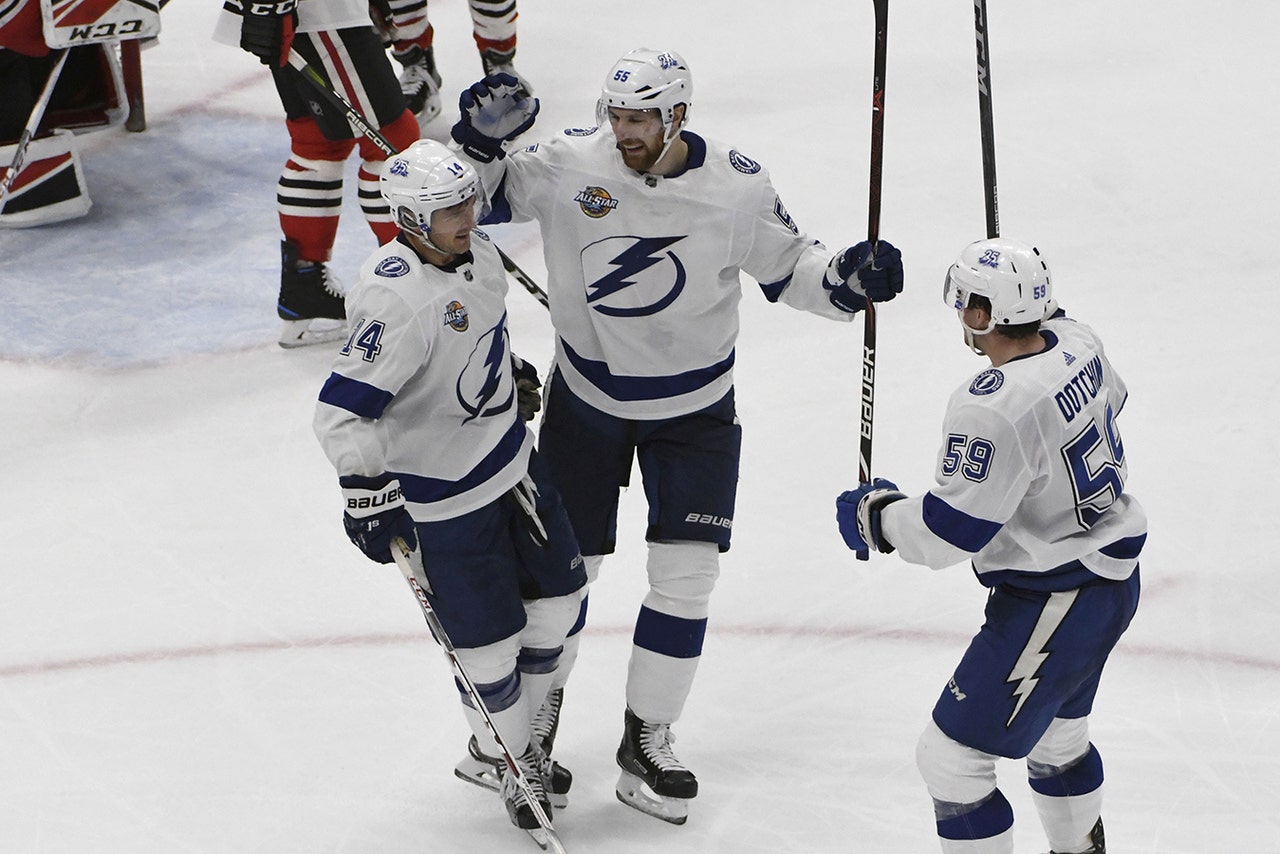 The Lightning followed a familiar formula back to the top of the NHL.

Vasilevskiy made 40 saves in his league-best seventh shutout and Kunitz scored a short-handed goal in the second period, leading Tampa Bay to a 2-0 victory over the sliding Chicago Blackhawks on Monday.

Yanni Gourde also scored as Tampa Bay stopped a season-high three-game skid and leapfrogged idle Vegas for the best record in the NHL. The Lightning, who lost to Chicago in the 2015 Stanley Cup Final, improved to 11-0-2 against the Blackhawks in their last 13 regular-season meetings.

Chicago controlled most of the second period, but one little lapse proved costly. With Tampa Bay defenseman Mikhail Sergachev serving a double minor for high sticking and unsportsmanlike conduct, Jake Dotchin shot the puck wide of the net and Kunitz found it before anyone else, taking it off the backboard and banking it in off the right skate of goaltender Jeff Glass.

"That's the difference in the game," Tampa Bay coach Jon Cooper said. "You look at the guys they throw over the boards. So you're going to give them 11 minutes in power-play time, to keep them off the board especially with 45 seconds of 5-on-3, that was the difference."

Kunitz's sixth goal was enough for Vasilevskiy, who got his 28th win of the season. Patrick Kane shot the puck off the right post during a power play in the first, and Anthony Duclair was stopped by Vasilevskiy on a breakaway 6:41 into the third.

"You could see early he was in the groove and he just kept that going for the rest of the game," Cooper said.

Gourde put the game away when he beat Glass with a slap shot low on the goaltender's glove side with 1:34 left. It was Gourde's 15th goal of the season.

"It's frustrating," Blackhawks defenseman Duncan Keith said. "I thought we played a lot better in tonight's game than we have in previous games, but it's not good enough. We had chances, we had momentum in the game, and I thought maybe our power play ... it would have been nice to get one, maybe two. Obviously, it didn't happen."

Tampa Bay (32-12-3) improved to 1-1 on an eight-game trip overlapping the All-Star festivities at its home arena. It's the longest road trip in the NHL this season.

Glass made 29 saves, but last-place Chicago (22-19-6) lost for the fourth time in five games. It was a much better performance than its previous two games, when Chicago was outscored 11-3 in losses to Detroit and the New York Islanders, but the Blackhawks are running out of time in the competitive Central Division.

"That hole's getting deeper," coach Joel Quenneville said. "Some positive things, but not scoring in some key situations and giving up that shorty in a period where you've probably played as good as you played in a long time. You dominate and you're down 1-0 with a four-minute power play and you don't score on a 5-on-3."

NOTES: Tampa Bay F Ondrej Palat was scratched with a lower-body injury after he got hurt during a 5-2 loss at Minnesota on Saturday. He is expected to miss six to eight weeks. "It's really unfortunate for us," Cooper said. "He's such a big part of our team." ... Blackhawks C Artem Anisimov was activated from injured reserve after missing 10 straight games with an upper-body injury. The 29-year-old Anisimov has 13 goals, including six game-winners, and five assists in 37 games this season. ... Lightning C Alex Killorn played in his 400th NHL game.