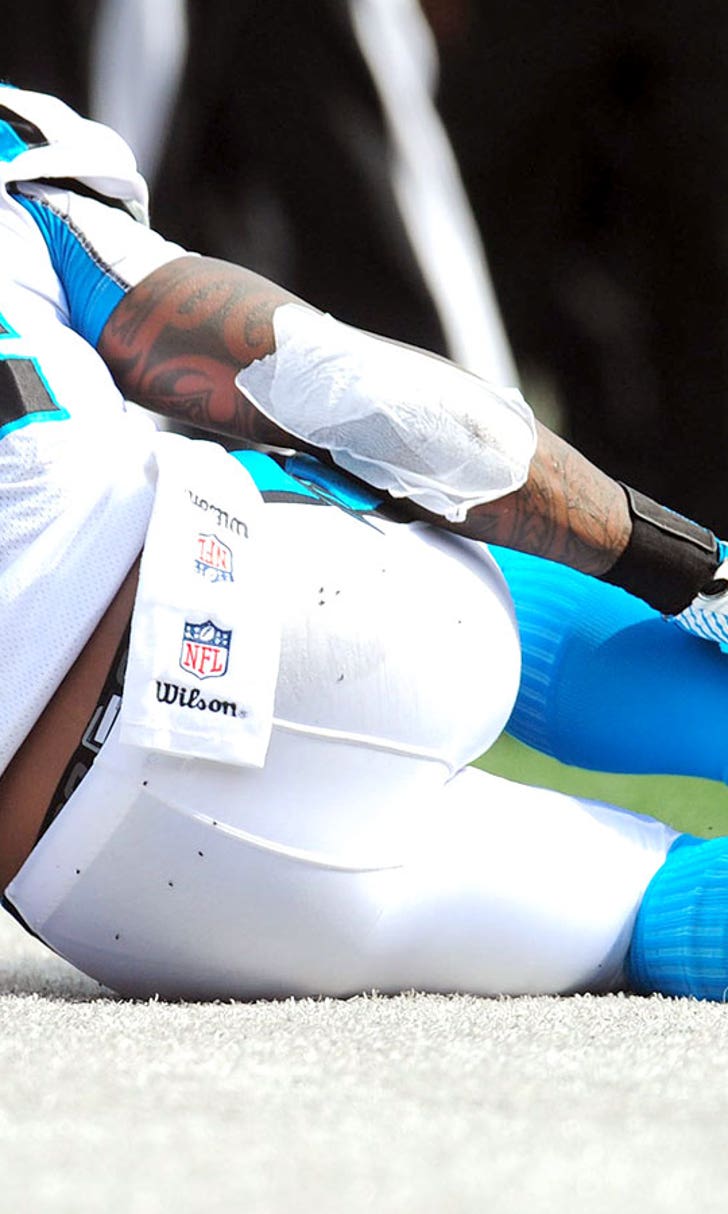 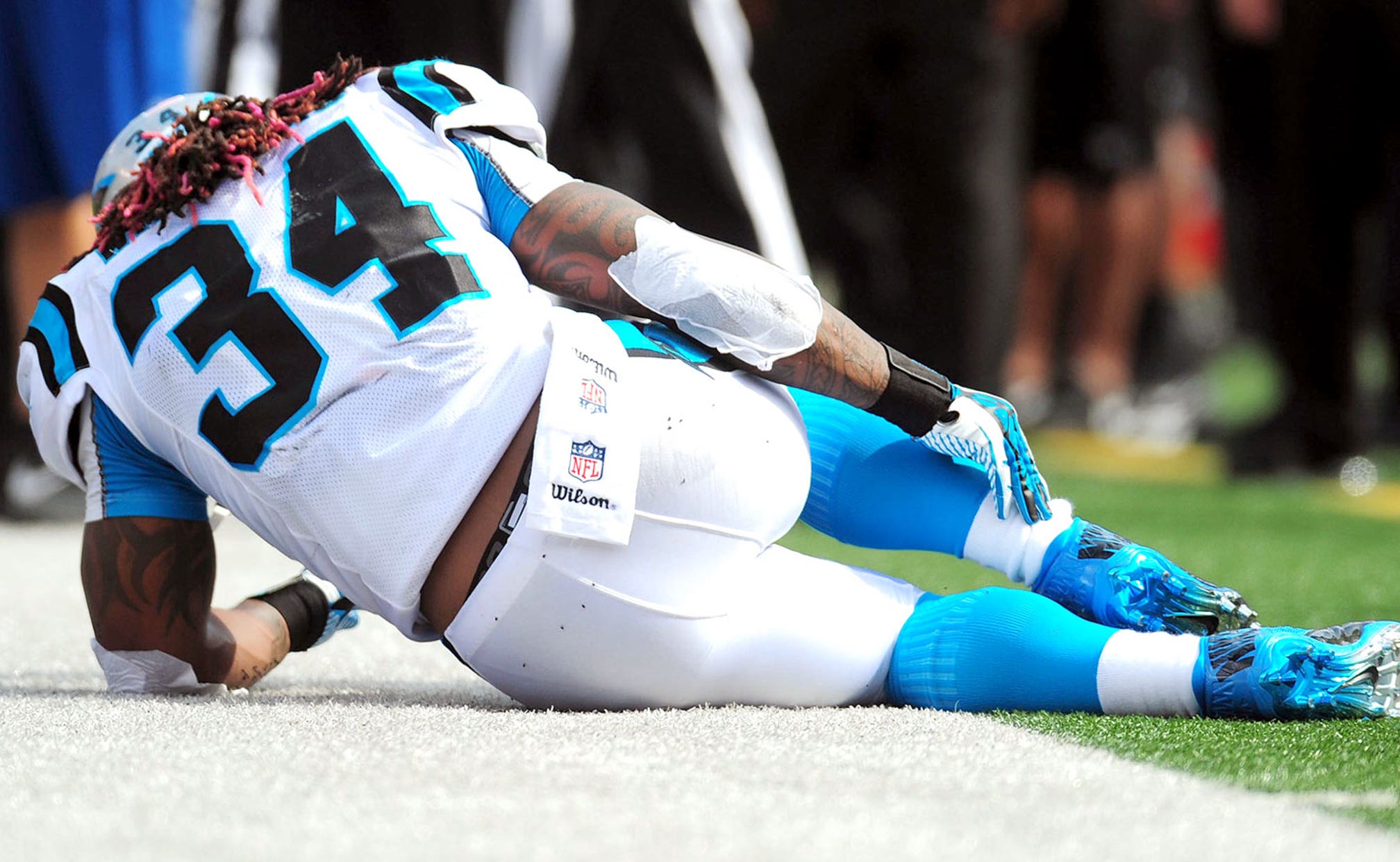 One of the major advantages of playing weekly fantasy football on DraftKings is that your team won’t be decimated by injuries. While an injury to a key player on your season-long team can destroy your playoff chances, the ability to create a new DraftKings team each week means you won’t have to worry about a losing season caused by an unlucky break (no pun intended).

But that doesn’t mean that you don’t need to pay attention to injuries. Actually, your ability to understand how injuries will affect fantasy performances is crucial to your success as a weekly fantasy player.

As we reach midseason, every NFL team is dealing with a number of injuries. Sometimes we know whether or not a particular player in question will be playing in a game very early in the week, and sometimes that news doesn’t come out until just before kickoff.

Luckily, DraftKings has a late-swap feature that allows you to remove any player whose game has not yet begun for any other player whose game hasn’t started (provided you remain under the salary cap). That means that if you start a running back in the Sunday night matchup and he’s a late scratch, you can sub him out for any cheaper running back in that game or the Monday night contest, and you can do that until just before the Sunday night game kicks off.

The late-swap feature allows you to be a lot more aggressive with your lineup creation. If you really like a player who is listed as questionable, you can plug him in, knowing there isn’t much risk for you because you can always remove him if necessary.

You should monitor the status of every injured player throughout the week, but the ‘doubtful’ and ‘probable’ designations usually mean ‘out’ and ‘playing.’ It’s the ‘questionable’ tag that can really give us trouble.

One thing that I’ve always wondered is if we can trust questionable players to perform as usual when they are a little banged up, so I charted the fantasy performances (relative to a player’s average) when listed as questionable. 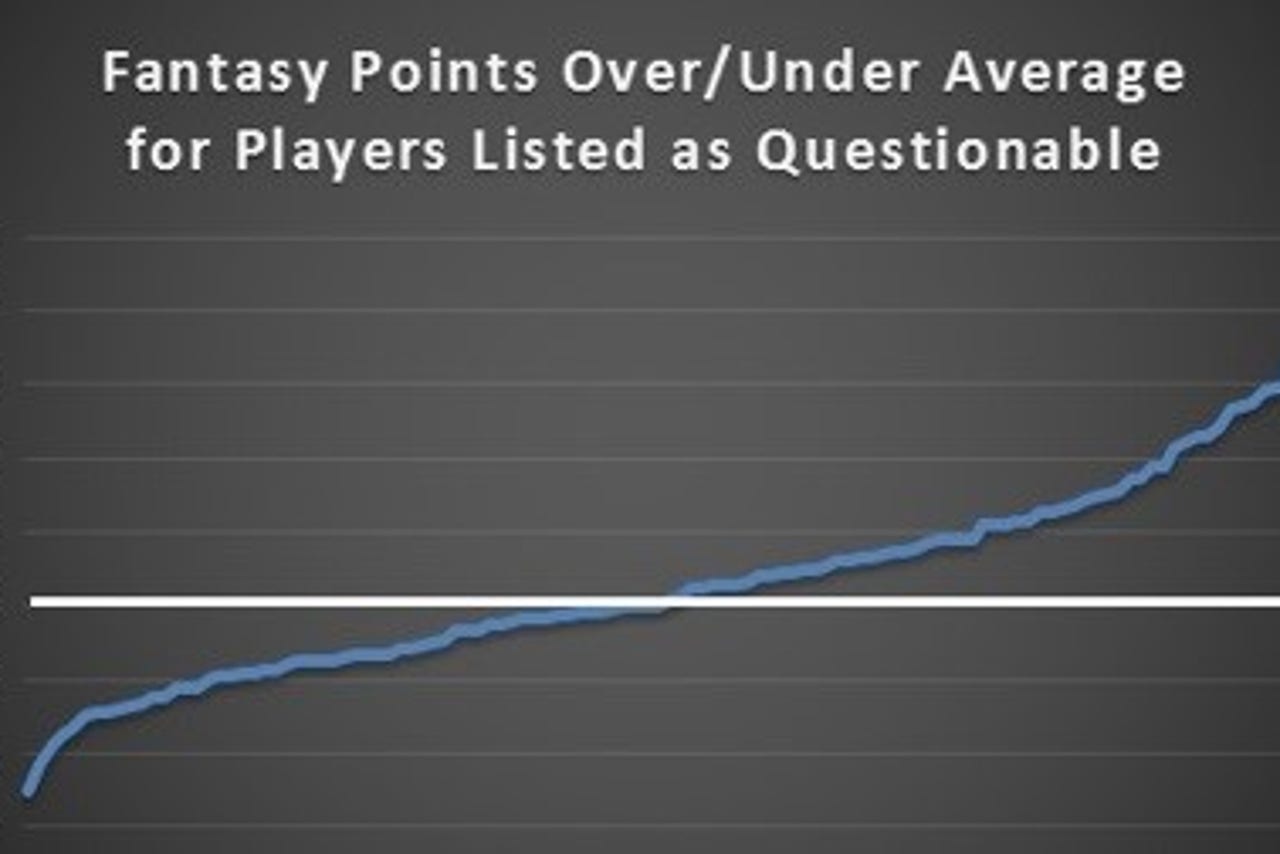 The bold line represents no change from normal. There’s slightly more area below the curve and above zero than above it and below zero, suggesting players have actually scored more points than average when listed as questionable. Indeed, that’s the case; the average change in fantasy output for the questionable players I analyzed was +1.57.

Now, I don’t think questionable players really perform better than normal because they’re questionable. You could make an argument that, if the opponent is unsure if they’ll play, they might not game plan for them, thus leading to greater success.

However, a more likely explanation is just that there’s more room for upside than downside. A player who normally scores 7.0 fantasy points per game can really only underachieve by seven points (and that’s highly unlikely), whereas he can easily triple or even quadruple his typically fantasy output with an elite performance.

Thus, in this situation, I think a better way to analyze the data is simple addition: how many players underachieved and how many overachieved? The answer is the same—as in half of the questionable players performed better than normal and half were worse than average.

In a typical distribution, you’ll normally see more games below the average than above it because of the upside effect; there’s more room for above-average outliers than below-average ones. Here’s a sample 16-game fantasy-point distribution. 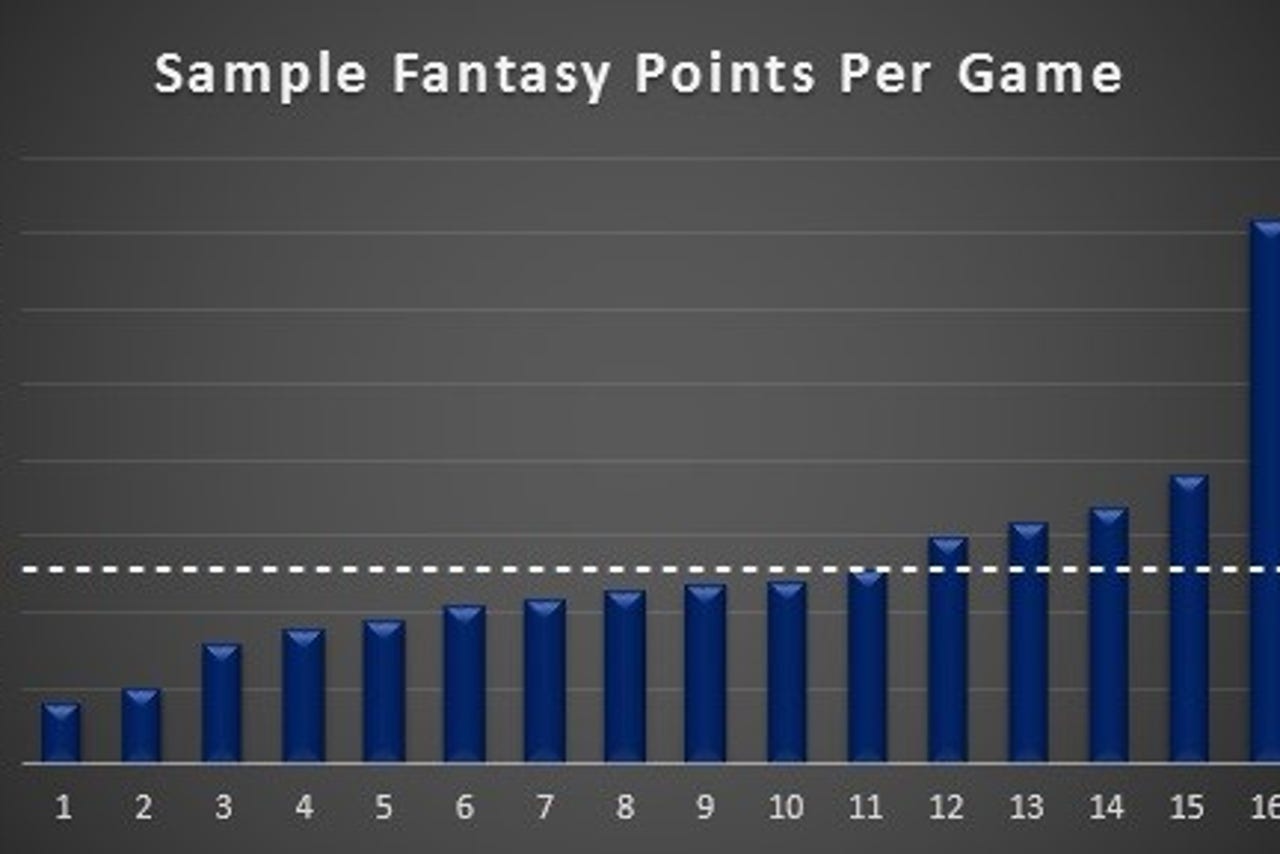 In this case, the sample player scored 13 points per game. But because of one outlier, 11 of the 16 performances occur below the mean. That’s just a necessary outcome of point distributions over the long run.

Thus, the fact that half of questionable players have overachieved relative to their season averages hints that you can play them without much hesitation. They might still be hurting, but with modern medicine and all of the pain injections they get before and during games, there’s probably not as much risk surrounding questionable players as you’d think.

It’s very common to consider how an injury might affect a particular player, but the best fantasy minds consider how a player who is out with an injury will affect the dynamics of his team. Will it result in dramatically reduced offensive efficiency? Will the backup see the majority of the workload, or will it be more evenly distributed?

One of my favorite times to take advantage of an injury is when it happens to a running back. Running back production is extremely dependent on workload and offensive line quality such that actual talent doesn’t matter all that much at the position. That’s evident when you see the average fantasy points for starting running backs (RB1) versus backups who have been thrust into the starting lineup (RB2) over the past five seasons. 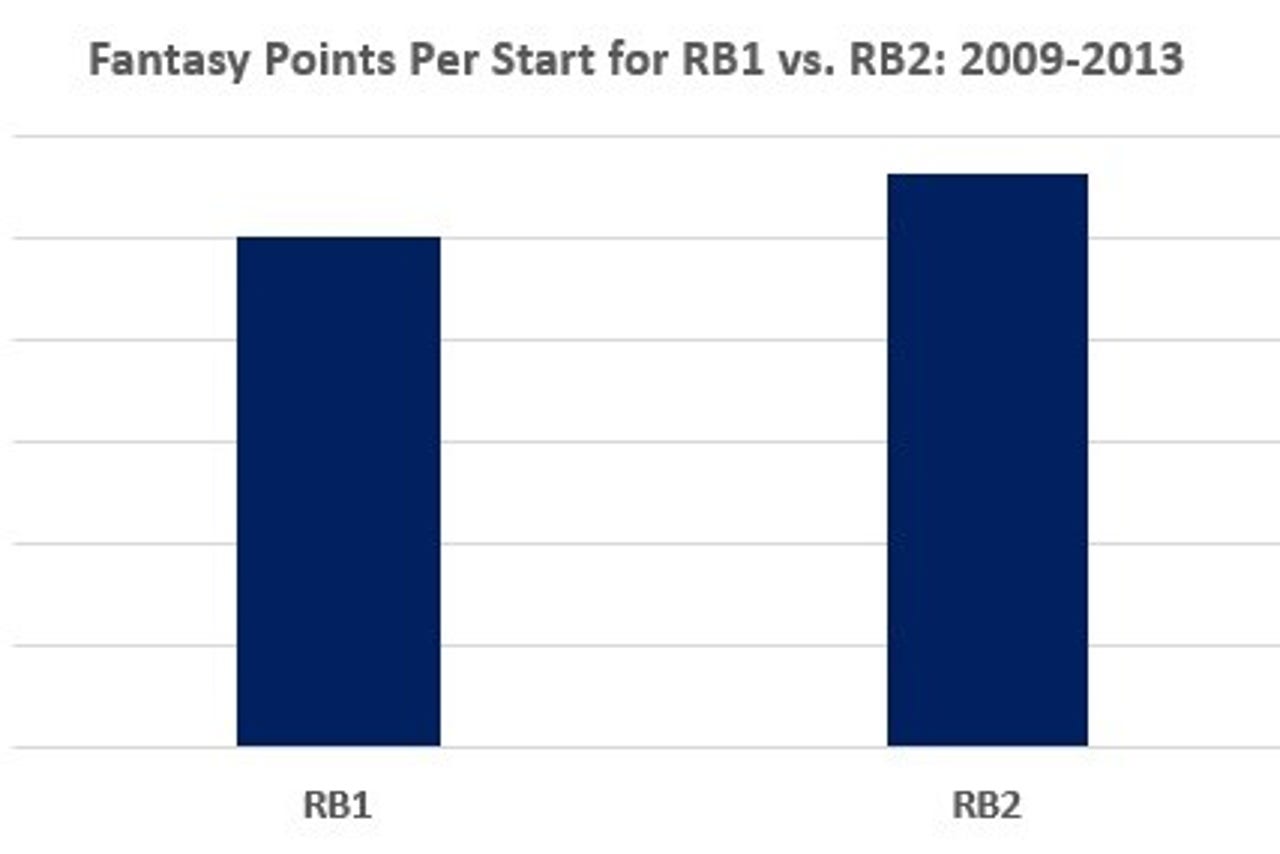 Yes, backup running backs have produced at a higher level than the starters when the No. 1 back goes down with an injury. The key is simply projecting workload, and if a backup is going to see a comparable number of touches to the original starter, then he’s probably going to be a smart play.

Finally, consider using injuries to help you predict usage. Knowing how much players will be utilized is really important in tournaments, where there’s value in creating a unique lineup.

Many times, players will get questionable tags even when they played the previous week and appear fully healthy. Those tags are shown on DraftKings next to each player’s name, and they can drive down usage. Further, even if you’re unsure if a player is fully healthy, it can make sense to take a shot on him in a GPP, assuming he’s set to see normal snaps, because people simply don’t want to risk it on an injured player.

One of my favorite tricks is to use a true game-time decision in the Sunday or Monday night game. We typically won’t have any information about his health when the early games lock at 1pm EST. If things don’t go as planned and the player gets scratched, you can always use the late-swap feature to pivot away from him. Just keep this in mind when you make the decision so that you have a backup plan in place.

I did this early in the season with the Sunday-night matchup between the Bears and 49ers, using Brandon Marshall when he was listed as a game-time decision. His usage was extremely low, but it was a no-brainer for me because I knew that, if he were out, I could easily pivot to Alshon Jeffery. In that situation, I got an elite player (who ended up dominating) with extremely low usage, without taking on much risk.