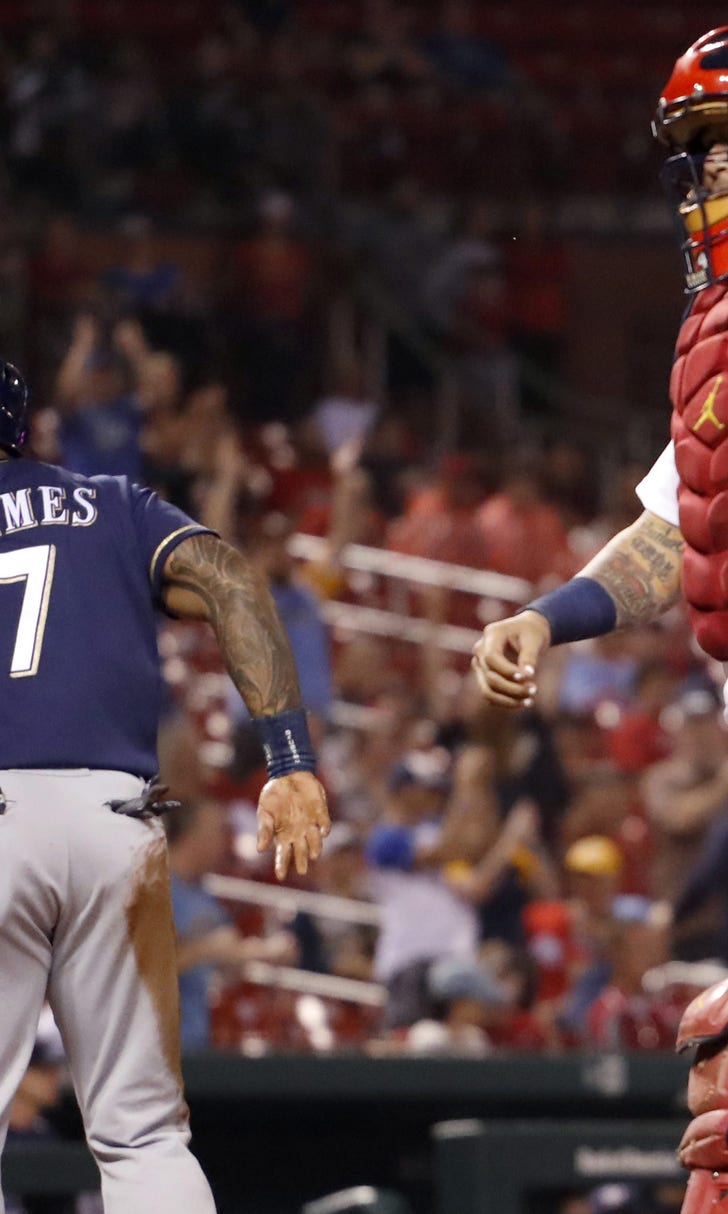 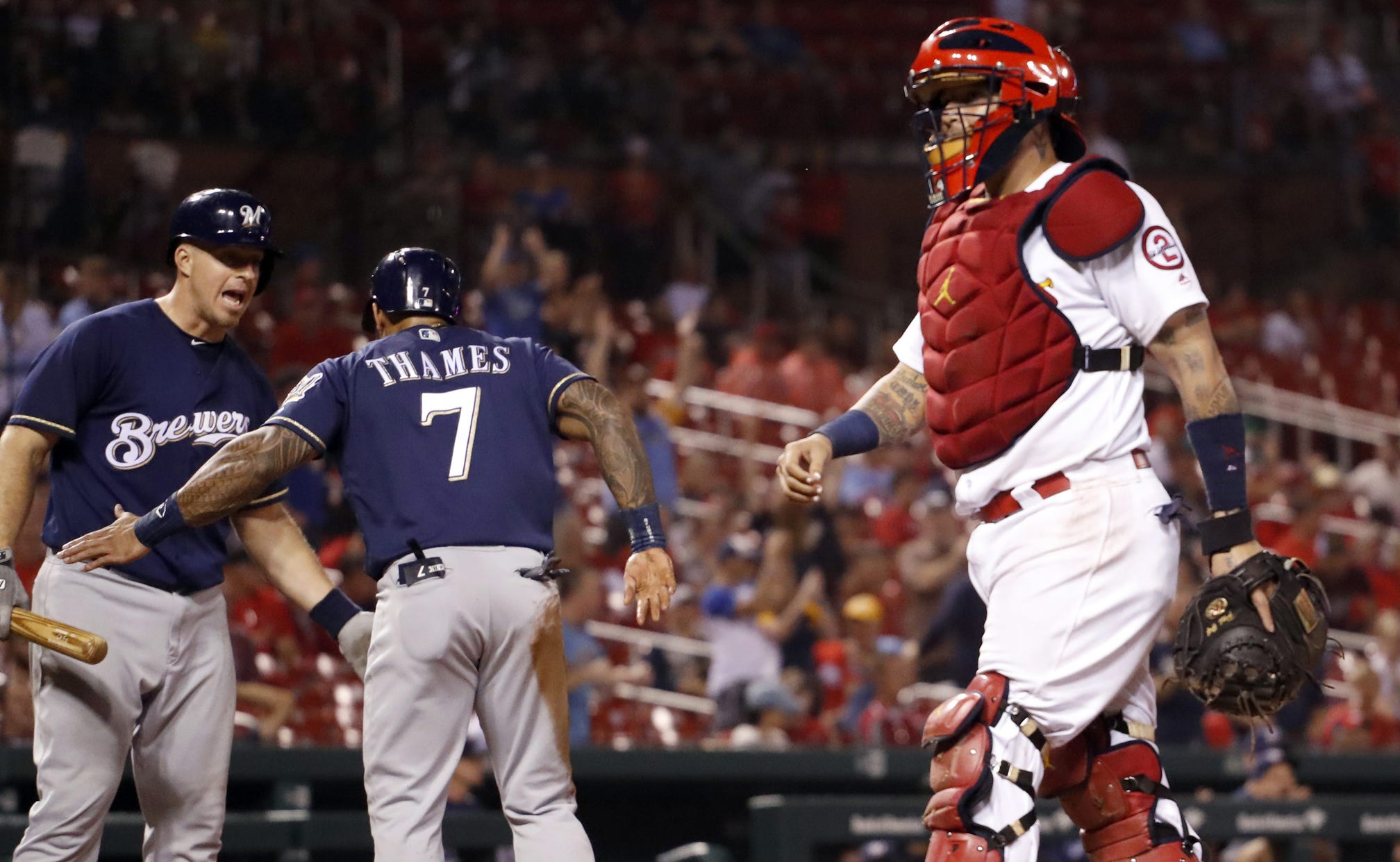 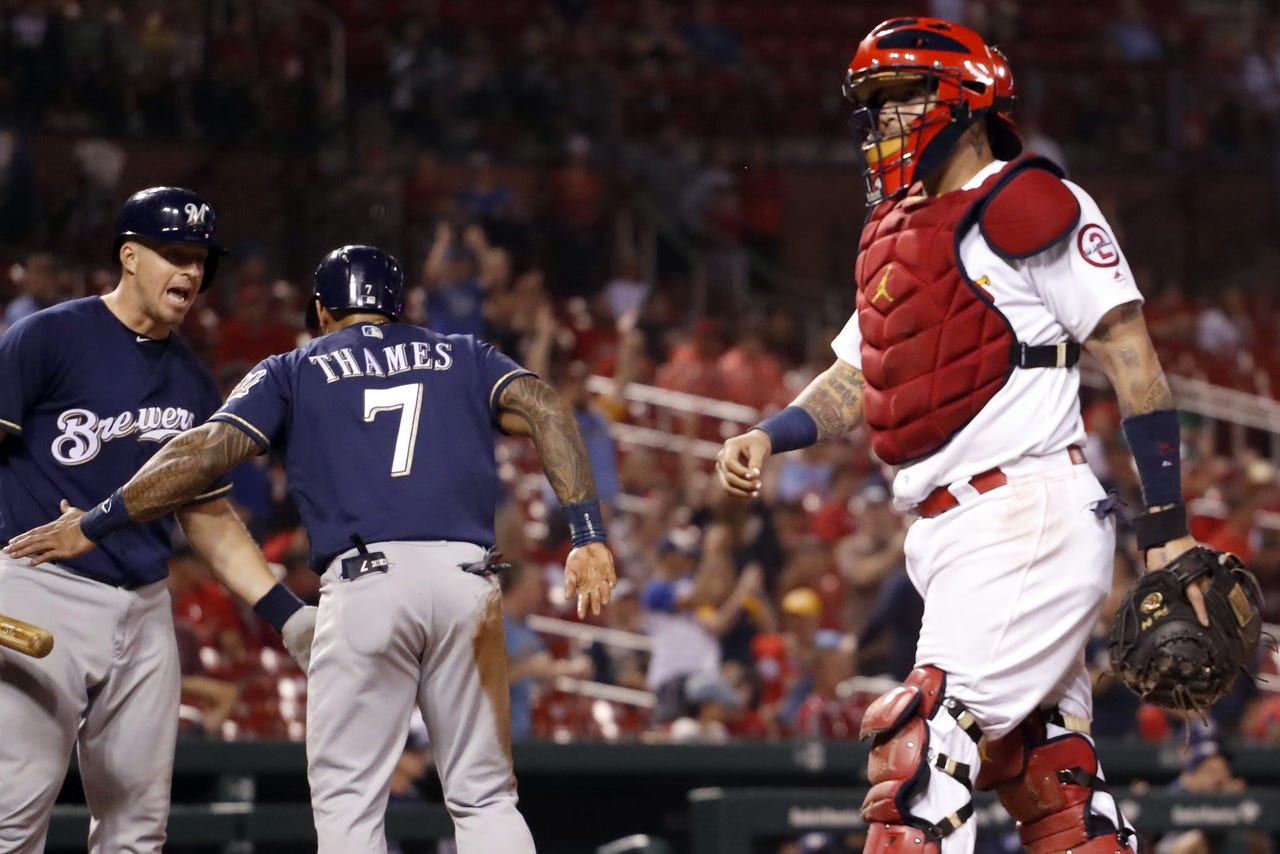 ST. LOUIS — A chuckling Eric Thames said it felt so good he almost ripped third base out of the ground and hoisted it above his head.

A lot of that going around for Milwaukee these days.

Thames tripled and scored on reliever Bud Norris' throwing error in the eighth inning, and the Brewers improved their playoff positioning by topping the St. Louis Cardinals 6-4 on Monday night.

"You have to capitalize on errors and bad pitches, wild pitches and stuff like that," Thames said. "Tonight we did that."

Ryan Braun homered and Christian Yelich drove in two runs as Milwaukee won for the fourth time in five games. The Brewers (90-67) opened a three-game lead over St. Louis for the top spot in the wild-card standings and pulled within 1 1/2 games of the NL Central-leading Chicago Cubs, who lost 5-1 to Pittsburgh.

"Offensively, we did a heck of a job," manager Craig Counsell said.

Corbin Burnes (7-0), the seventh of nine Milwaukee pitchers, got two outs for the win, and Corey Knebel worked the ninth for his 16th save. With a runner on, Jose Martinez fouled off four two-strike pitches before taking a called third strike for the final out.

Chase Anderson was slated to start before Counsell announced Sunday that the team had decided to go with a bullpen game instead. Dan Jennings made his first career start and retired Matt Carpenter on a grounder to second before the left-hander was replaced by Freddy Peralta, beginning a parade of relievers for the Brewers.

"Props to everybody who came in behind me and the position players for getting it done," Jennings said. "That's a grind right there."

Martinez and Marcell Ozuna homered off Josh Hader in the rain, but St. Louis (87-70) was unable to close out a one-run lead. The Cardinals' advantage in the race for the second NL wild card was trimmed to a half-game over Colorado, which cruised to a 10-1 win over Philadelphia.

"It's not frustrating, at all," Martinez said. "We've got two games to win the series."

Thames has played sparingly this year with the Brewers in playoff contention. But Counsell sent him up to hit for Burnes in the eighth and he tripled past a sliding Martinez in right field with one out.

After Mike Moustakas was intentionally walked, Norris (3-6) tried a pickoff throw that hit the baserunner before bounding away from first baseman Matt Carpenter.

"It was called from the dugout. ... A decent throw, but obviously crept in and got him and the ball bounced away," Norris said. "Just a tough break. Very unfortunate."

Thames scored easily and Yelich added an RBI double in the ninth as Milwaukee improved to 9-8 against St. Louis this season. Yelich, one of the top candidates for NL MVP, also walked and scored on Braun's bases-loaded walk as the Brewers scored two runs in the sixth without a hit, opening a 3-1 lead.

St. Louis staged a dramatic rally as the showers intensified on a soggy night at Busch Stadium.

Martinez led off the sixth with a drive to center for his 17th homer, sending a charge through the crowd of 36,508. After Paul DeJong walked, Ozuna put the Cardinals in front with a screaming liner just over the wall in center.

Hader had given up just six homers in 51 appearances this year, and none since Anthony Rizzo connected for the Cubs on Sept. 3.

But Milwaukee quickly answered. The Brewers loaded the bases with one out in the seventh against Jordan Hicks, and Keon Broxton scampered home with the tying run on Yelich's fielder's choice back up the middle.

Counsell said All-Star reliever Jeremy Jeffress was unavailable because of neck spasms. The right-hander is day to day.

Brewers: Hader was visited by Counsell and a trainer after he slipped while trying to pick off Harrison Bader at second. But Hader said after the game he was fine.

Cardinals: 2B Kolten Wong struck out swinging as a pinch hitter in his first appearance since he left Friday's 5-3 victory over San Francisco with cramps in both hamstrings. "It's definitely turned a corner," he said before the loss. "It feels a lot better today."

Brewers left-hander Gio Gonzalez (9-11, 4.28 ERA) and Cardinals left-hander Austin Gomber (6-1, 3.63) pitch on Tuesday night. Gonzalez is 2-0 with a 1.65 ERA in three starts since he was acquired in a trade with Washington on Aug. 31. Gomber is coming off a solid start at Atlanta, allowing one run in five innings for an 8-1 victory.