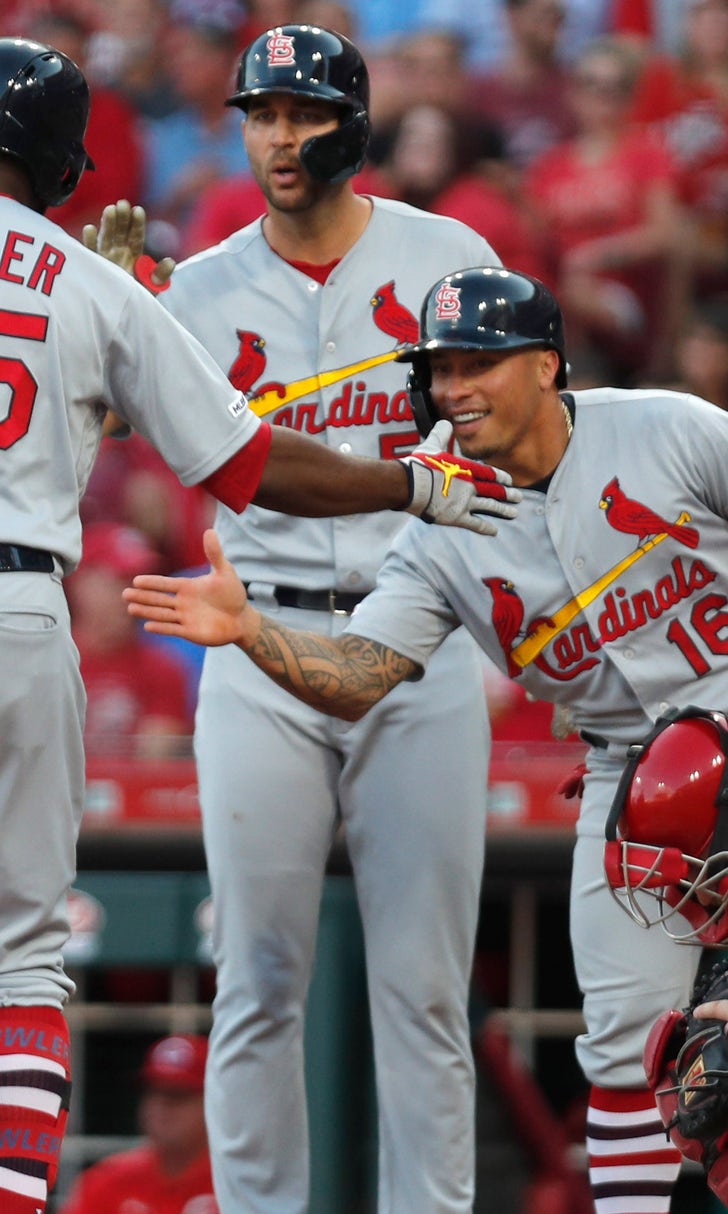 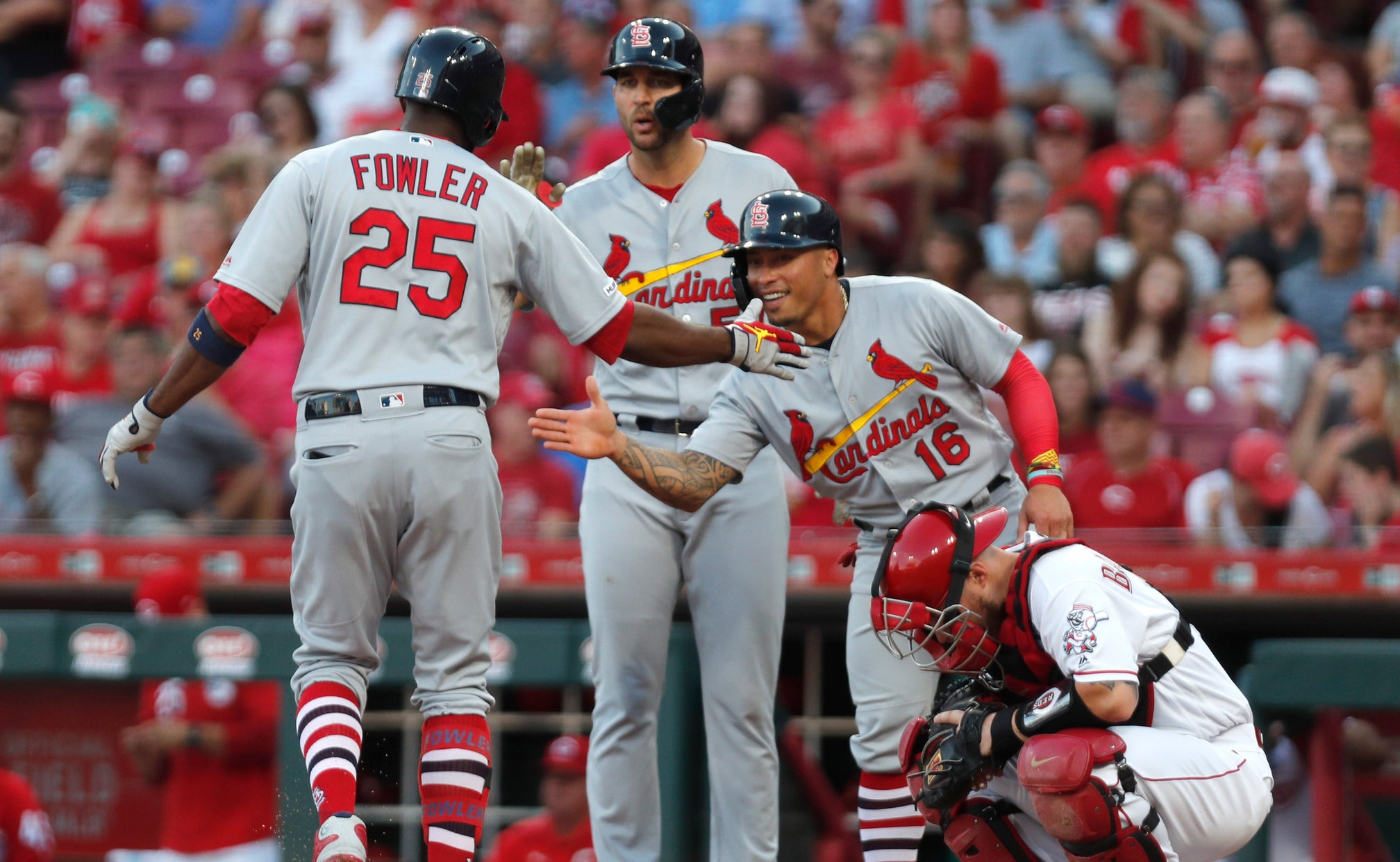 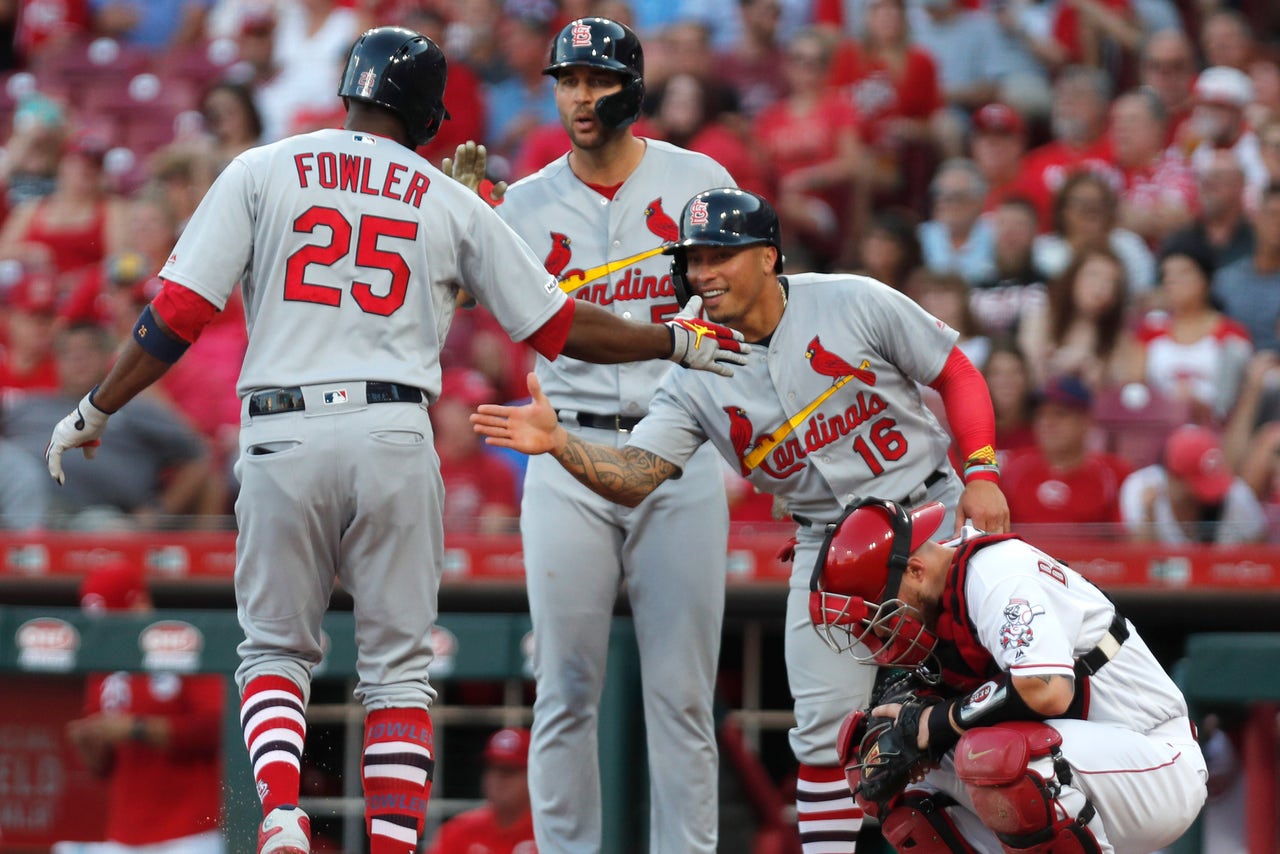 CINCINNATI — The St. Louis Cardinals scored two runs in 12 innings of Luis Castillo's first two starts against them this season, both Cincinnati wins.

Scoring a run within the first four batters suggested a different outcome on Friday night.

Dexter Fowler hit a three-run homer and drove in four runs, Paul DeJong and Paul Goldschmidt added two-run shots and St. Louis rocked Castillo on the way to a 13-4 romp over the Reds.

Kolten Wong had a solo homer among his four hits and Fowler, Marcell Ozuna and Tommy Edman each had three as the Cardinals piled up a season-high 18 hits and moved into sole possession of first place in the NL Central.

Fowler's second-inning homer came on Castillo's 50th pitch of the game, a 3-0 fastball. The homer was the first allowed by Castillo on a 3-0 pitch in his career.

"I've got a pretty good idea of the strike zone and I know where I like it," Fowler said of his 14th homer of the season, adding that Shildt usually lets him decide what to do on 3-0.

Fowler on slugging a three-run shot against the Reds' Luis Castillo: "This dude has dominated me. He's a good pitcher. I just wanted to get something good to hit and I got one." #TimeToFly

Rookie sensation Aristides Aquino, who was the first player since 1900 to hit at least nine home runs in his first 14 games, made it a record 10 in 16 with a two-run shot deep into the left-field seats in Cincinnati's three-run sixth. Rhys Hoskins previously held the record with nine in 2017 for Philadelphia.

Castillo (11-5) tied his career highs with nine hits and three homers allowed, and set a career worst by yielding eight runs in 4 1/3 innings. The All-Star right-hander had three strikeouts.

"They were aggressive," Castillo said. "They selected good pitches to hit. Some of my pitches got too much of the plate, but others they just put a good swing on them. It was one of those nights. I thought my changeup and my slider were working pretty good tonight. When things don't go good for you, they are just not going to be good for you."

Adam Wainwright (9-8) improved to 4-1 over his last seven starts. He allowed eight hits and four runs with one walk and six strikeouts in 6 2/3 innings.

Ozuna drove in Edman from first base with a two-out double in the first inning, giving the Cardinals as many hits and runs in their first four batters as they collected in nine innings on Thursday.

Castillo retired the first two batters in the second before Wong and Wainwright singled on back-to-back pitches, setting up Fowler's three-run shot into the right-center seats.

"It looked to me like he was missing over the middle of the plate," Reds manager David Bell said of Castillo. "Everybody is going to have a night like that. He's been pitching so well. They were ready for him."

Goldschmidt broke the game open with his two-run, opposite-field shot to right-center in the fifth.

Reds RHP Joel Kuhnel made his major league debut in the seventh. He struck out Yadier Molina, the first batter he faced, before giving up a home run by Wong, the next batter.

José Iglesias extended his hitting streak to 11 games, the longest for the Reds this season.

DeJong's homer was the 13th of his career against Cincinnati, more than he's hit against any other team.

Cardinals: OF José Martinez decided against receiving a cortisone shot in his right shoulder and hopes to resume baseball activities this weekend.

Reds: 3B Eugenio Suaréz left the game in the top of the sixth with a sprained left thumb. X-rays were negative. 1B Joey Votto missed his second straight start with lower back tightness. OF Jesse Winker was experiencing upper back tightness.

Cardinals: RHP Miles Mikolas (7-12) avoided a loss despite getting roughed up for seven hits and six runs in five innings of St. Louis's 11-9 win over Pittsburgh on Sunday.

Reds: RHP Anthony DeSclafani (7-7) gave up four hits and two runs, one earned, with no walks and 11 strikeouts in his last start against St. Louis, a 3-1 loss on July 21.