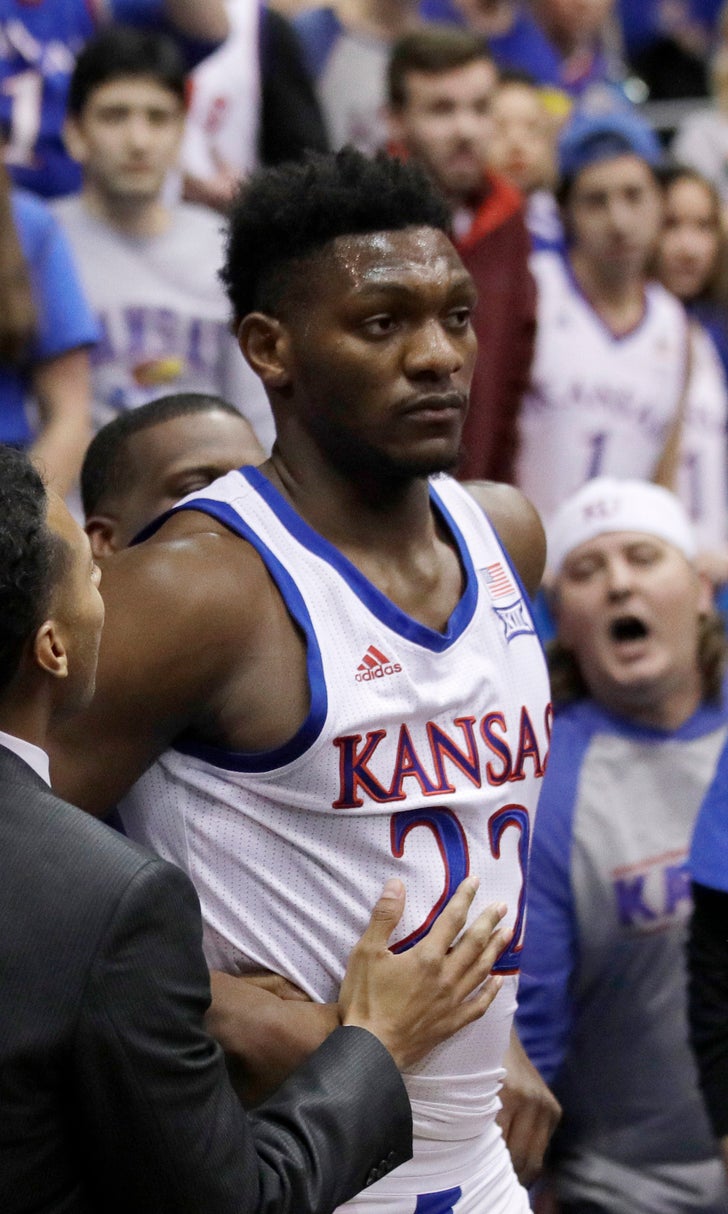 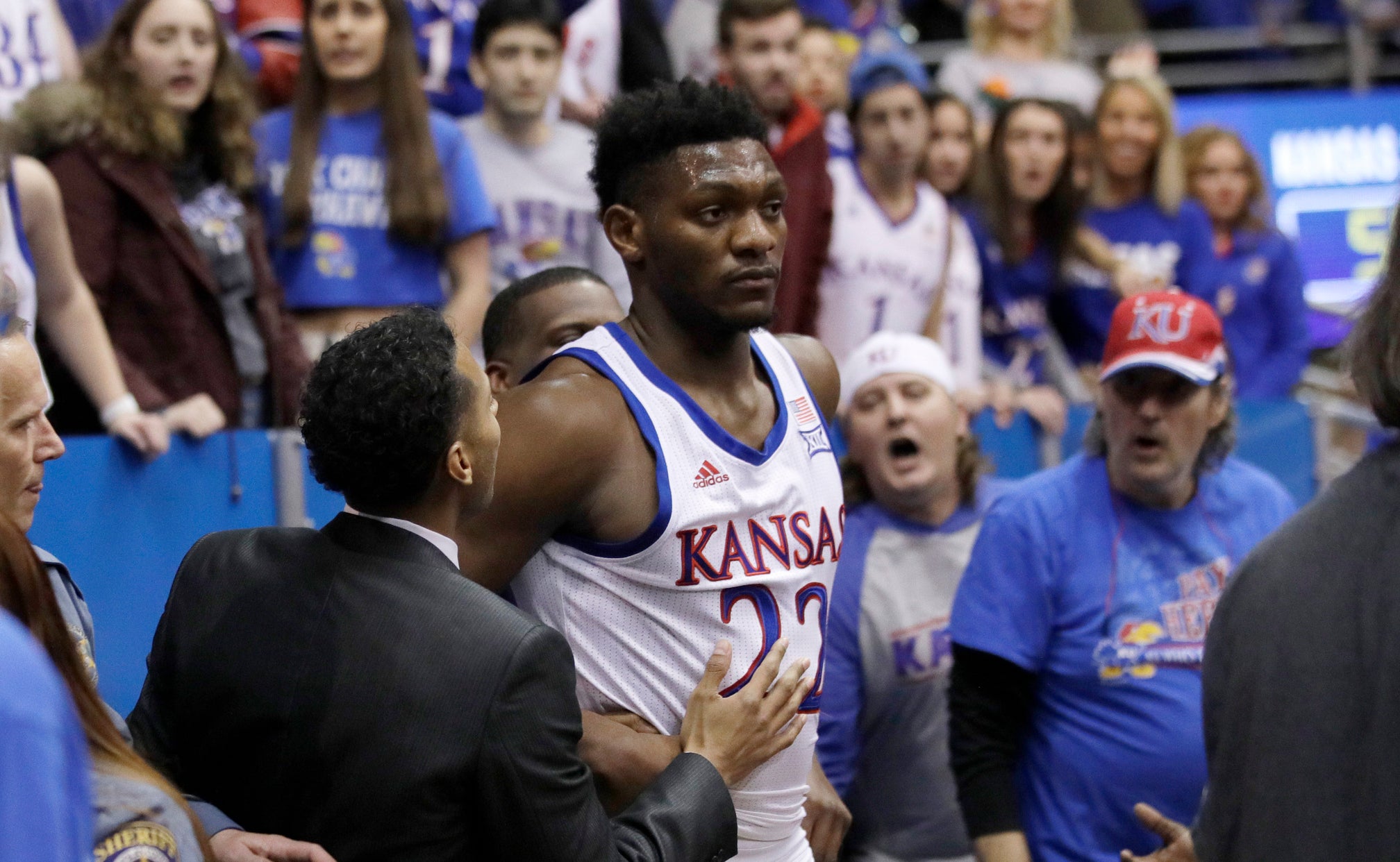 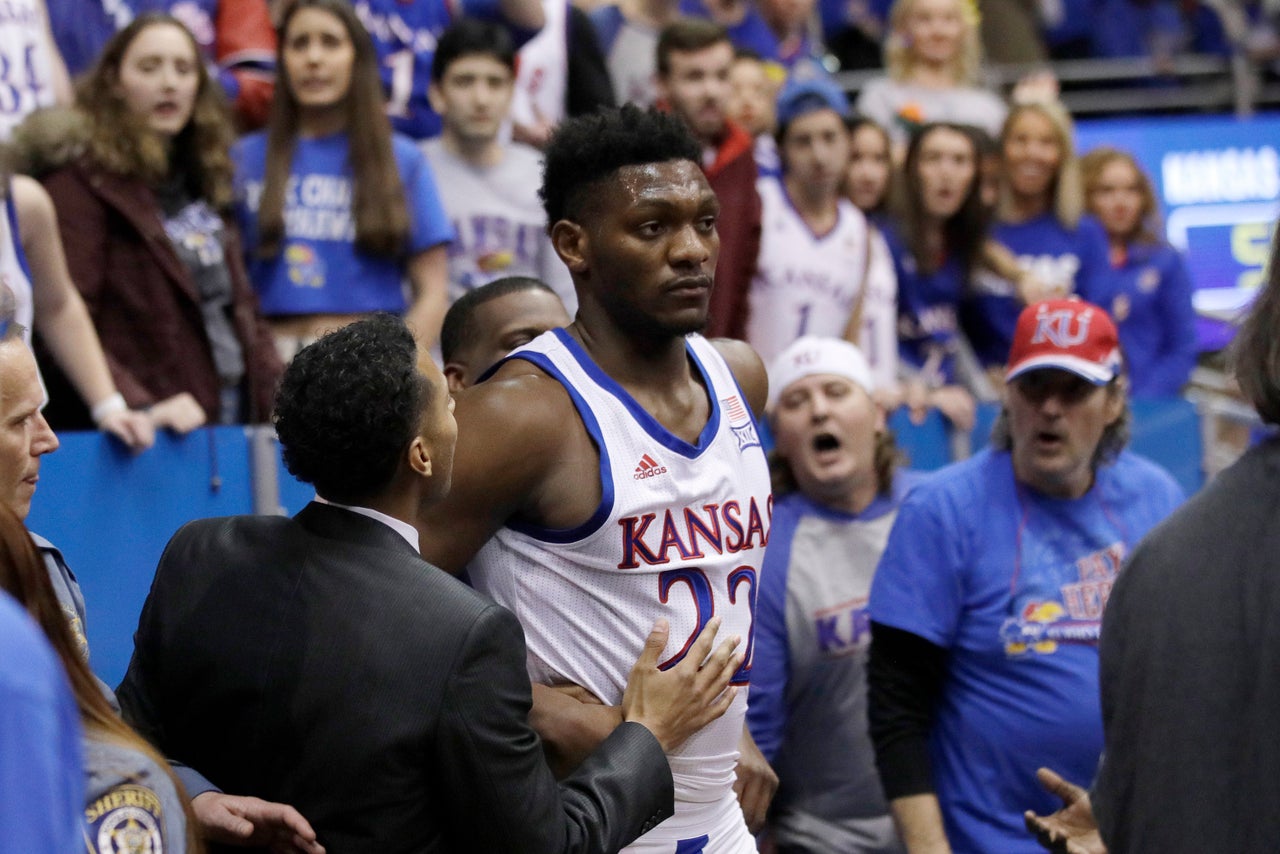 LAWRENCE, Kan. — The Big 12 suspended four players from Kansas and Kansas State a combined 25 games Wednesday for their roles in a melee that spilled off the court and into a section of disabled seating in Allen Fieldhouse near the end of the third-ranked Jayhawks' win over the Wildcats.

Both schools also were reprimanded by the Big 12 for violations of its sportsmanship policy.

“This kind of behavior cannot be tolerated and these suspensions reflect the severity of last night's events," Big 12 commissioner Bob Bowlsby said. “I am appreciative of the cooperation of both institutions in resolving this matter.”

De Sousa was the main instigator on the Kansas side Tuesday night, getting stripped of the ball as he was dribbling out the final seconds of an 81-60 win. He recovered to block a layup attempt by the Wildcats' DaJuan Gordon, then stood over the freshman in a taunting manner, triggering both benches to empty in a scrum that spilled into fans.

At one point, De Sousa was preparing to swing a stool when it was plucked from his hands, and several players from both teams threw wild punches while a sellout crowd in Allen Fieldhouse watched in shock.

“I have suspended Silvio De Sousa indefinitely pending the final outcome of the review by KU and the Big 12 Conference," Self said shortly after discussing the incident on the league's weekly conference call with reporters. “As I said last night, we are disappointed in his actions and there is no place in the game for that behavior.”

Kansas (15-3) has played six conference games, which means De Sousa's suspension from the Big 12 would last through the end of the regular season. The Jayhawks are a half-game back of top-ranked Baylor in the league standings, and they have a team that is capable of making a deep run in the NCAA Tournament.

“Obviously, an unfortunate situation,” said Dan Gavitt, the NCAA vice president for men's basketball. “... It's too early to say how it might affect them (in the NCAA Tournament).”

Self said he spoke with a fan who was caught up in the melee, and that she was banged around “to the point where I'm sure we'll correspond with her today to see how she's feeling.”

“Obviously, it's embarrassing,” Self said. “It's not something to be proud of.”

Games between Kansas and Kansas State are always testy affairs, and for all but the final seconds their meeting at Allen Fieldhouse was rather subdued. The Jayhawks used a 19-2 run midway through the first half to seize control and the outcome was never in doubt the final 30 minutes.

The fight drew comparisons to the brawl between Cincinnati and Xavier in December 2011 that left players bloodied and college basketball fans aghast. Eight players wound up suspended for a total of 30 games.

Kansas State coach Bruce Weber told his players to allow the Jayhawks to dribble out the clock, and he was walking toward the scorer's table to shake hands with Self when the benches emptied. Both coaches eventually joined members of their staff, security officials and even Kansas cheerleaders in trying to separate the players.

“Very, very sad by the event that happened last night,” said Weber, adding the school would issue its own punishments soon. “It's sad and disappointing and you know, it leaves a bad picture for everybody. And I've been in this for a long time and you see it happen occasionally and you think you're not going to be part of it and obviously I was part of it — we were part of it — and it's sad for college basketball, the game that I love and I've been part of basically all my life.”

The fracas continued a particularly difficult 12 months for Self and the Jayhawks, and De Sousa has played a big part in most of it. His name surfaced as part of the FBI probe into college basketball in October 2018, and that in part led to an NCAA investigation that resulted in a notice of allegations last September outlining major violations tied to recruiting in men's basketball. Those violations are being appealed and a decision is not expected until later this year.

De Sousa was initially suspended for two seasons for his role in the case — last season and this season — and the school spent significant resources appealing the punishment. It eventually was reduced, allowing the junior forward to play this season.

The One and Only
The enigmatic Maradona, despite his controversies, will be remembered most for his genius on the pitch, writes Martin Rogers.
17 hours ago

Sports World Reacts To Maradona's Death
Legendary Argentinian soccer superstar Diego Maradona has died at age 60, and the sports world is mourning his passing.
22 hours ago