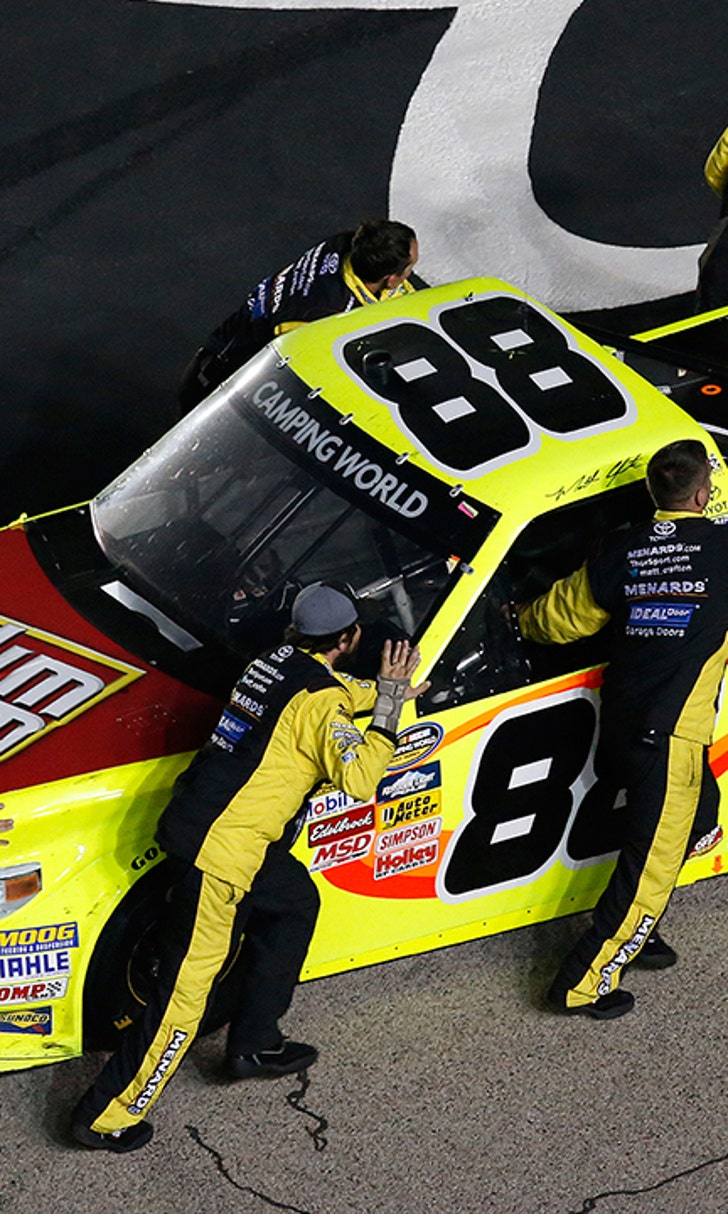 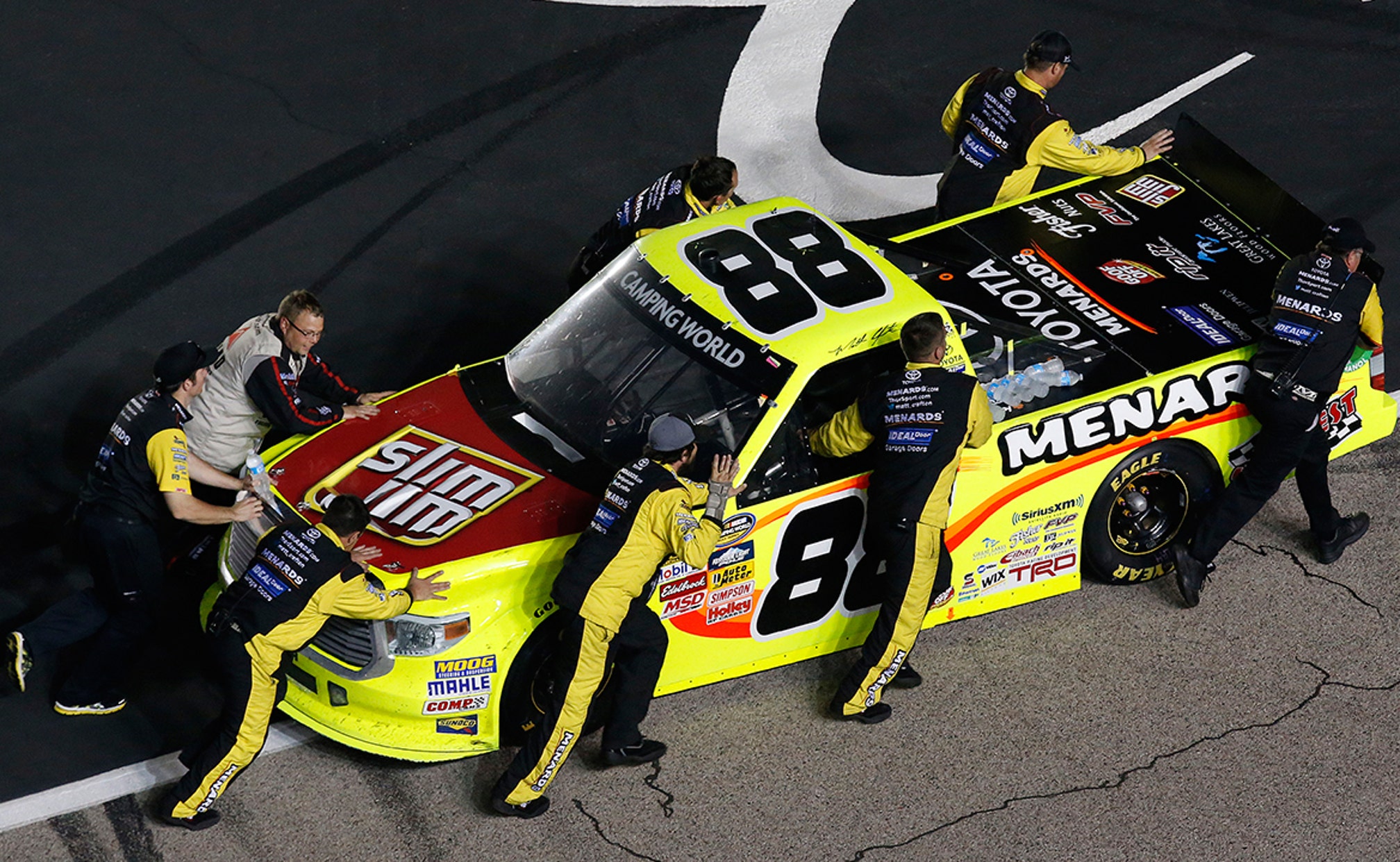 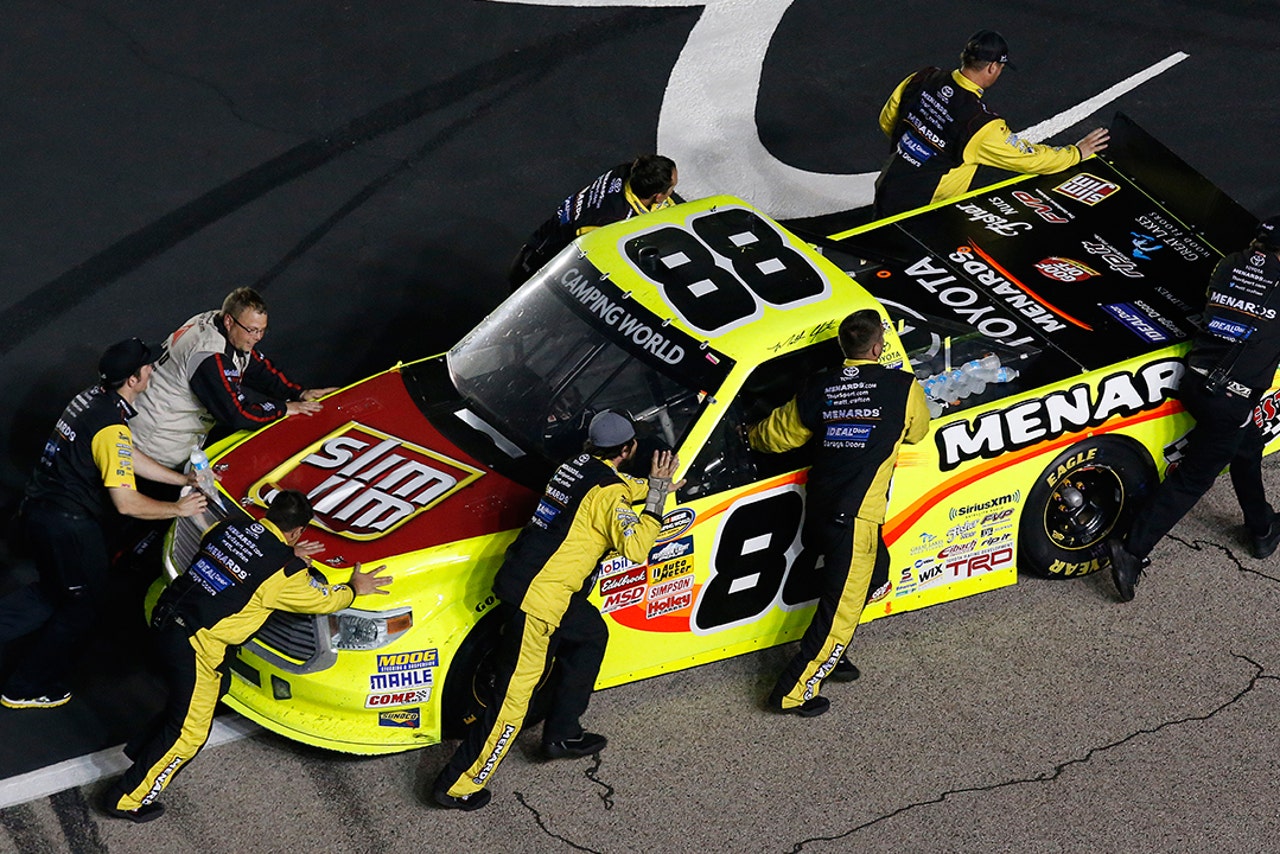 One week after wrecking as the points leader at Dover International Speedway, Matt Crafton showed up to Texas Motor Speedway on a mission to dominate.

While Crafton was the dominant truck for much of the night, the final laps of the race were on edge as teams began peeling off the track with less than 10 laps to go to pit for fuel.

Unlike many of the lead-lap trucks, Crafton tried to stretch his fuel mileage to the end. As trucks hit pit road, Crafton slowed the race pace trying his best to save fuel.

The gamble paid off as Crafton crossed the line to score his second win of the 2014 season in dramatic fashion.

"They said it was going to be close on fuel, (and) I was saving," Crafton said in Victory Lane. "My God, it's tough to save when you have such a fast truck. I said these guys were unbelievable. This Menards/Slim Jim Toyota Tundra was really, really good. I could go wherever I wanted to, however I wanted to, and the guys were awesome on pit road tonight, again."

Crafton, who led 118 of the 167 laps, called it a "dream come true" to finally score the win at Texas Motor Speedway. This was Crafton's second win of the season, and come just one week after a disappointing 23rd-place finish at Dover.

While the night initially looked as if it would come down to tire wear and strategy, it was ultimately fuel mileage that determined the race, something winning crew chief Carl Joiner was never worried about.

"I've got all the confidence in the world in our gas mileage man," Joiner said. "I knew Matt could save us a little bit. We got really good mileage here the run before that, and this was a longer run. It started to worry me when everyone came down pit road -- you always have your doubts -- but it just gave us that cushion where Matt could save it at the end."

Pole-sitter Justin Lofton was second, followed by Joe Nemechek and Joey Coulter, who all stretched their fuel mileage to make it to the end. Ryan Blaney pitted with nine laps to go, but was able to make his way back to fifth by the end of the race.

Lofton led the field to the green flag on the outside lane, but Crafton was able to get by him on the inside to lead the first lap of the race. Crafton took the top spot and set the pace of the race for the opening stages until the first caution on Lap 34 when Norm Benning spun.

On the first stop of the night on Lap 35, Ron Hornaday was able to gain three spots and the lead by narrowly beating Ryan Blaney to the pit exit.

While Blaney got the jump on Hornaday on the restart, Crafton wasted no time making his way back into contention for the lead. Just laps after the restart, Mason Mingus, Joe Nemechek and Tyler Reddick made contact battling for position off Turn 4.

Mingus and Nemechek were forced to pit road under green flag conditions as a result of the contact. As Nemechek made his way in for service, the right front tire on Reddick’s No. 19 Ford gave out, sending him hard into the outside wall and bringing out the second caution of the night.

Crafton wasted no time getting back to the lead on the ensuing restart, but Blaney was able to stay right with the 2013 series champion.

The tough luck for Timothy Peters continued Friday night as he ran over something on the track and cut the right rear tire on Lap 8 of 167. Peters was forced to hit pit road early, falling back to 25th two laps down to the leader before Lap 10.

As if that wasn't bad enough, Peters hit the wall hard on Lap 53 when his Red Horse Racing teammate German Quiroga blew an engine.

"I left off the gas as soon as I saw German blowing (up), and tried to go low to hit the apron, but the oil trail was already started to soon," Peters said. "Just got into it and along for the ride."

Under caution, Crafton led the field to pit road for the second time of the night. While Crafton’s No. 88 team took four tires and fuel, the rest of the field opted to save their tires and took fuel only.

After dominating the first 60 laps of the race, Crafton restarted eighth when Blaney and Hornaday led the field back to green.

Crafton wasted no time getting back to the front of the field on his four fresh tires, making his way from eighth to second in just nine laps. However, it took a bit longer for Crafton to work his way back to the lead.

With 75 laps to go, Crafton was able work his way around Blaney to reclaim the top spot. When the caution flew on Lap 105 for debris, the field headed back down pit road, but the ThorSport Racing team was able to get him back out first.

On the restart, Hornaday made a dramatic move to go three-wide for the lead under Blaney and Crafton into Turn 3. While the move initially worked, Hornaday could not keep Crafton and his fast truck behind him.

"Hornaday, he never ceases to amaze me," Crafton said. "I thought I was going to get by the 29 (Blaney) and they said 'Three-wide' and I looked down there and saw the black and red truck of Hornaday. It was awesome racing tonight."

Crafton also won earlier this season at Martinsville and twice had finished second in the series to Kyle Busch, the Sprint Cup veteran who sat out this race.

Hometown Triumph
Kurt Busch has sprung himself back into championship contention. Here are Bob Pockrass's takeaways from Sunday in Las Vegas.
18 hours ago