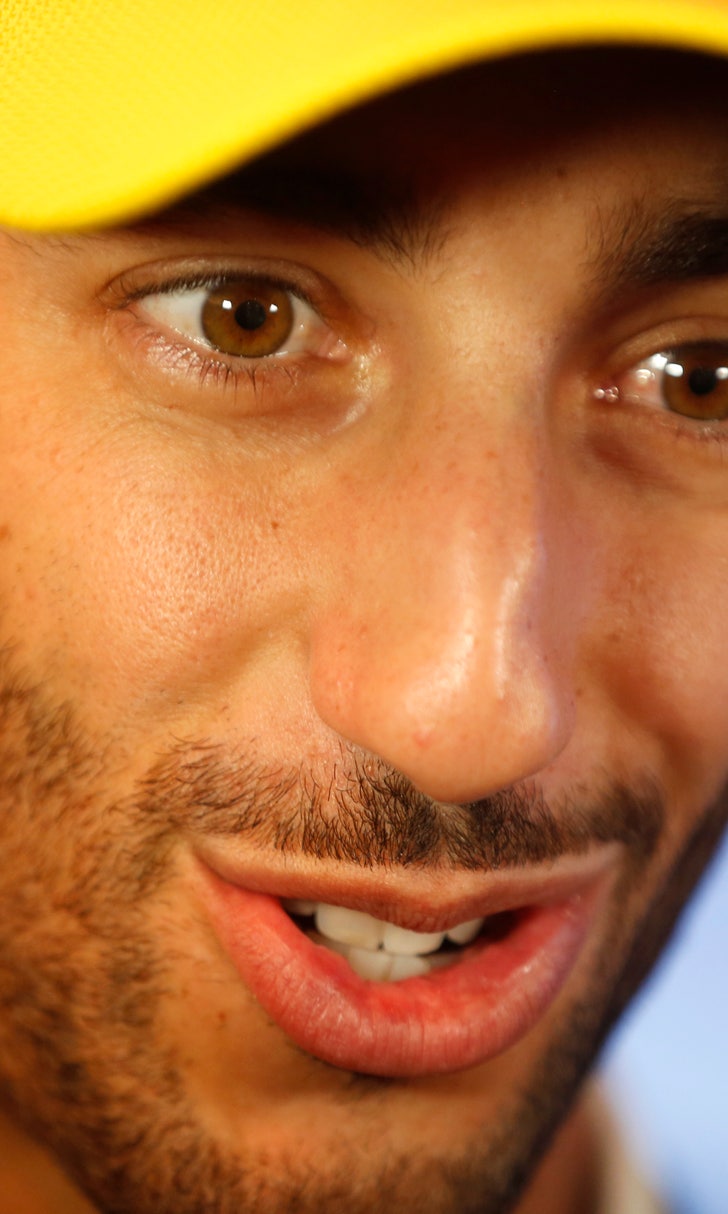 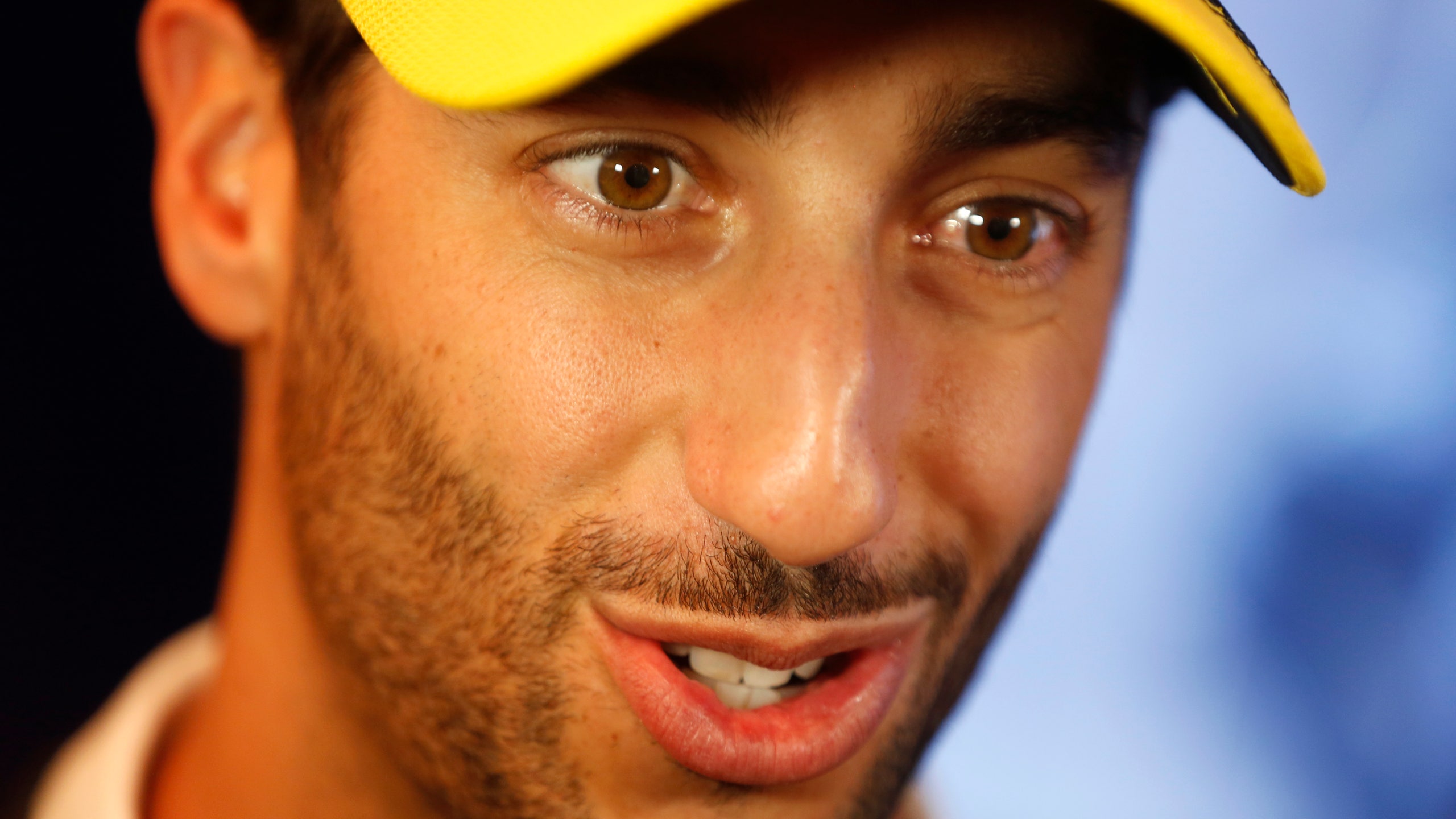 Ricciardo hopes team bonding can lead to F1 podiums in 2020

PARIS (AP) — Having gone a full Formula One season without a single podium finish, Renault driver Daniel Ricciardo is itching to ditch his footwear again after a race.

“I am craving to take my shoe off, for sure. It's been a while," joked Ricciardo, who celebrates podiums by pulling off a sweaty racing shoe, pouring Champagne into it and taking a hearty gulp.

“I am optimistic. I feel like this year there's a bit more stability in the structure,” he said at Renault's 2020 car launch on the Champs-Élysées on Wednesday. "We have to move forward.”

Ricciardo has not been on the podium since winning the Monaco Grand Prix with his former team Red Bull in May 2018. His best finish in 2019 was fourth place at the Italian GP late in the season — a far cry from his 29 podiums, three pole positions and seven wins with Red Bull.

As he prepares for his 10th season in F1, the 30-year-old Australian driver is hoping that team-bonding activities can help drag the French manufacturer back into contention. His first chance comes at his home race, the season-opening Australian GP in Melbourne on March 15.

Renault dropped from fourth fifth in the constructor's standings last year, finishing 54 points behind McLaren, the team it supplies engines to.

“Personally I put responsibility on myself to get results and to have a presence in the team, immediately,” Ricciardo said. “If everyone has their head down, I also feel some responsibility to bring it up. Last year I learned a lot, ways we can be better as a unit.”

In his first season with Renault, he placed ninth in the drivers' standings, with teammate Nico Hulkenberg a distant 14th. Hulkenberg, who never secured a podium in 10 seasons, lost his seat. He was replaced by Frenchman Esteban Ocon, who returns to F1 after being cut by Force India for 2019.

Ricciardo's decision to leave Red Bull, where he formed a strong but strained partnership with Max Verstappen, to join Renault was widely considered a risky one.

At Renault, he sensed morale was too low, compounded by poor results. For that to improve, Ricciardo has pledged to play a central role in team-bonding exercises.

“We have some ideas in mind to integrate the team, not just on race weekends. Find ways away from the track to become more close as a unit,” he said. “Because you know the person a little bit more, and you've been something else with them away from the track, it's a way to have each other's back and support each other more.”

The “non-F1 tasks” are designed to push team members through a certain degree of physical exertion, and pull them closer together.

“Some outdoor activities, we're going to make a few people sweat as well,” he said. “Get them out of their limits and get them to re-insert some self-belief in themselves, get them to do something maybe they didn't think they do. It will help I'm sure.”

The 23-year-old Ocon also returns with a point to prove after not getting a seat last year, despite being highly rated.

Ocon's ambition could in turn sharpen up Ricciardo's driving.

“He's young, he's missed out a year and that hunger's going to be there,” Ricciardo said of his new teammate. “It's another person to gauge yourself (against), learn from. I think it's a good dynamic.”

'Michigan State was a whole new world'
In our series of Black History Month Stories, RJ Young looks at how Michigan State championed integration and changed college football.
4 hours ago

Spring Training Sights And Sounds
Baseball is back, as the Cactus and Grapefruit Leagues take the field to start spring training. Check out Day 1's best moments!
4 hours ago

Premier League Sunday Takeaways
The Premier League wasn't short of intrigue on Sunday. Here's everything you need to know from the day's biggest matches.
5 hours ago

The Prayer, Unanswered
In our Black History Month series, RJ Young looks at the career of Eldridge Dickey, the first Black QB selected in the first round of the draft.
22 hours ago
those were the latest stories
Want to see more?
View All Stories
Fox Sports™ and © 2021 Fox Media LLC and Fox Sports Interactive Media, LLC. All rights reserved. Use of this website (including any and all parts and components) constitutes your acceptance of these Terms of Use and Updated Privacy Policy. Advertising Choices. Do Not Sell my Personal Info