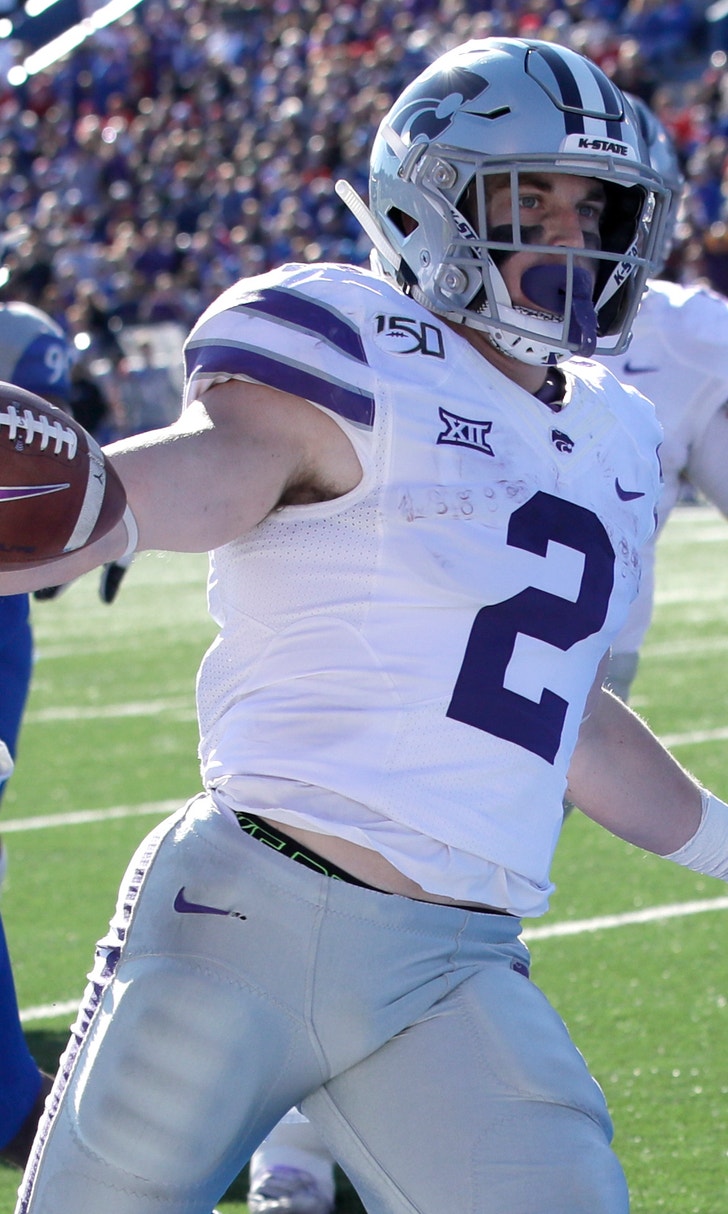 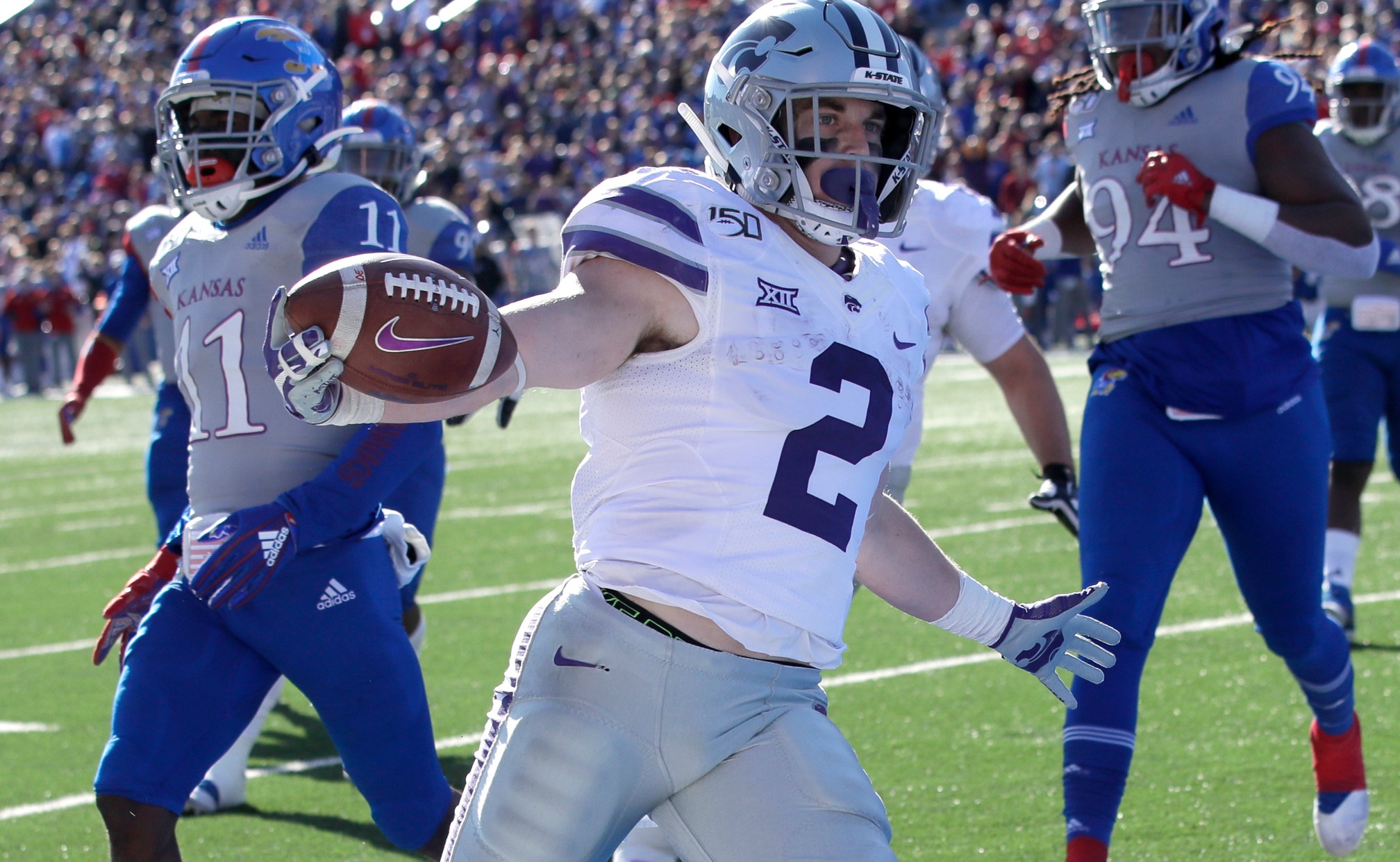 previous story
No. 17 Cincinnati escapes with 46-43 victory over ECU
next story
Nationals fans rejoice in red as hometown heroes are honored

LAWRENCE, Kan. (AP) — Chris Kleiman views himself as a caretaker for Kansas State football, sustaining and building on the traditions that predecessor Bill Snyder established over more than two decades.

Turns out that applies to the Wildcats' dominance of Kansas.

Skylar Thompson ran for 127 yards and three touchdowns, Harry Trotter added 92 yards rushing and another score, and No. 22 Kansas State romped to a 38-10 win in the Sunflower Showdown on Saturday to continue a streak of dominance that Snyder established and relished.

"It was our best football game of the year," Klieman said.

Carter Stanley was 13 of 23 for 115 yards and two interceptions for Kansas before leaving with an injury late in the game. Star running back Pooka Williams managed just 61 yards rushing.

The Wildcats held new coach Les Miles' team to 241 yards of offense, a 2-for-10 mark on third down and stopped it on both fourth down tries. Kansas State also had four sacks, dominated the time of possession and had 342 yards rushing in what turned into a lopsided affair.

"As a football team we're continuing to improve and get better," said Klieman, who was hired to replace the retired Snyder late last year. "But defensively, I thought we played really well."

On the other side?

Both teams rolled into Memorial Stadium off big wins, though. Along with the Wildcats' win over the Sooners, the Jayhawks beat Texas Tech on a game-ending field goal — the two wins separated by a stretch of Interstate 70 each prompting field-stormings and Big 12 reprimands.

So there was a little more excitement than usual for the Sunflower Showdown. Kansas announced a sellout for the first time since 2009, and fans were still waiting in long lines at security outside the stadium long after the game had kicked off.

Many of them missed the only time it was tied.

Kansas State promptly marched 88 yards for an opening touchdown, pounding it downfield with its run game despite having its top two running backs slowed by injuries. And when the Jayhawks managed a field goal, the Wildcats answered with a 78-yard touchdown march for a 14-3 lead.

Stanley, who had been so solid the past two weeks, threw both of his interceptions in the first half. The second came with less than 2 minutes left and set up Kansas State for a field goal.

Meanwhile, the only gripe the Wildcats at the break were the penalties: They were flagged seven times for 78 yards, or exactly four yards more than Kansas had in total offense.

The Wildcats ended any chance of a comeback with a 75-yard touchdown drive to open the second half. It was capped by Thompson scrambling to his right, then winning a race with Kansas safety Mike Lee to the end zone for his sixth touchdown rushing in the past two weeks.

Thompson added a seventh early in the fourth quarter, when Klieman began to grind away his first win in the 108-year history of the series.

"They're a good football team, and I told Les that before the game, they're doing some really good things, especially offensively," Klieman said. "It's a healthy rivalry because both teams have gotten better, and both teams I think — they're going to win some games still in this league."

Kansas State fullback Jax Dineen sent his brother, Kansas linebacker Jay Dineen, hobbling to the sideline with a knee injury after a dastardly block late in the third quarter.

U.S. Open champion Gary Woodland, a Topeka native who played golf at KU, was honored early in the game. It was the one moment that Kansas State and Kansas fans both cheered.

Kansas State proved a massive gulf still exists between the Wildcats and their biggest rival. Not only did they dominate, they did it without much help from top running backs James Gilbert and Jordon Brown, both of whom were nicked up in last week's game against the Sooners.

Kansas had been averaging 548 yards per game since Miles fired offensive coordinator Vic Koenning and promoted Brent Dearmon. But the Jayhawks never got on track against the Wildcats.

Kansas has the week off before visiting Oklahoma State.