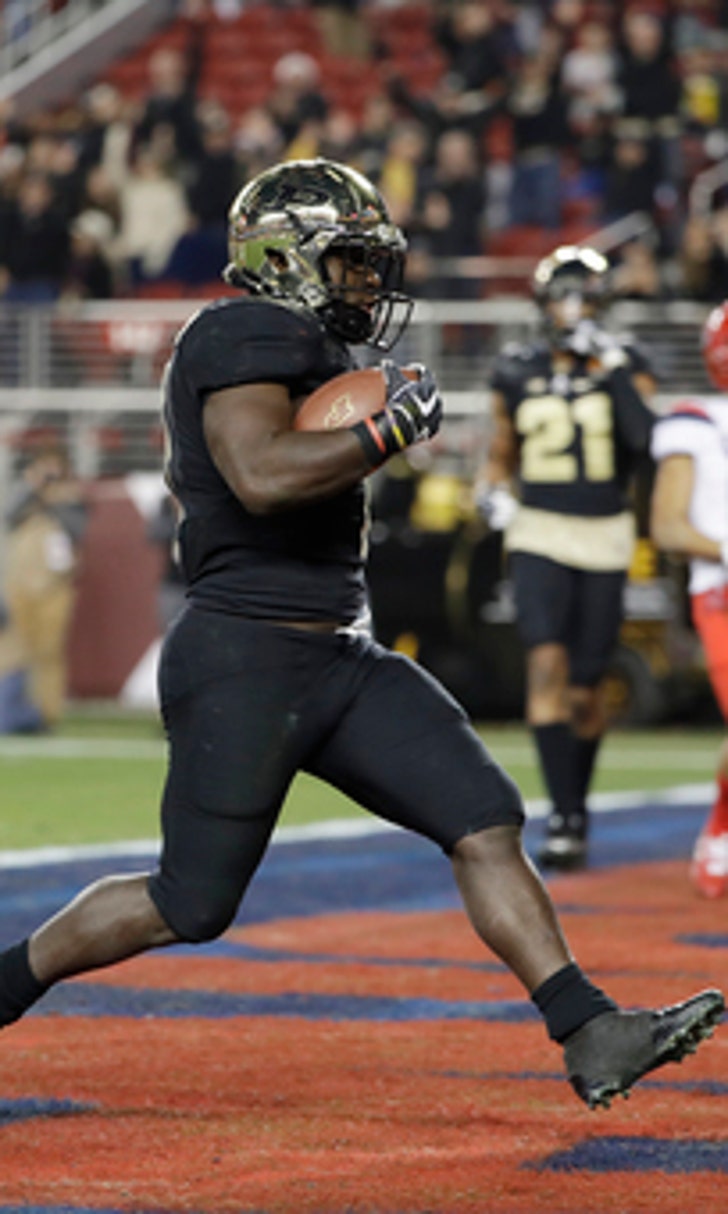 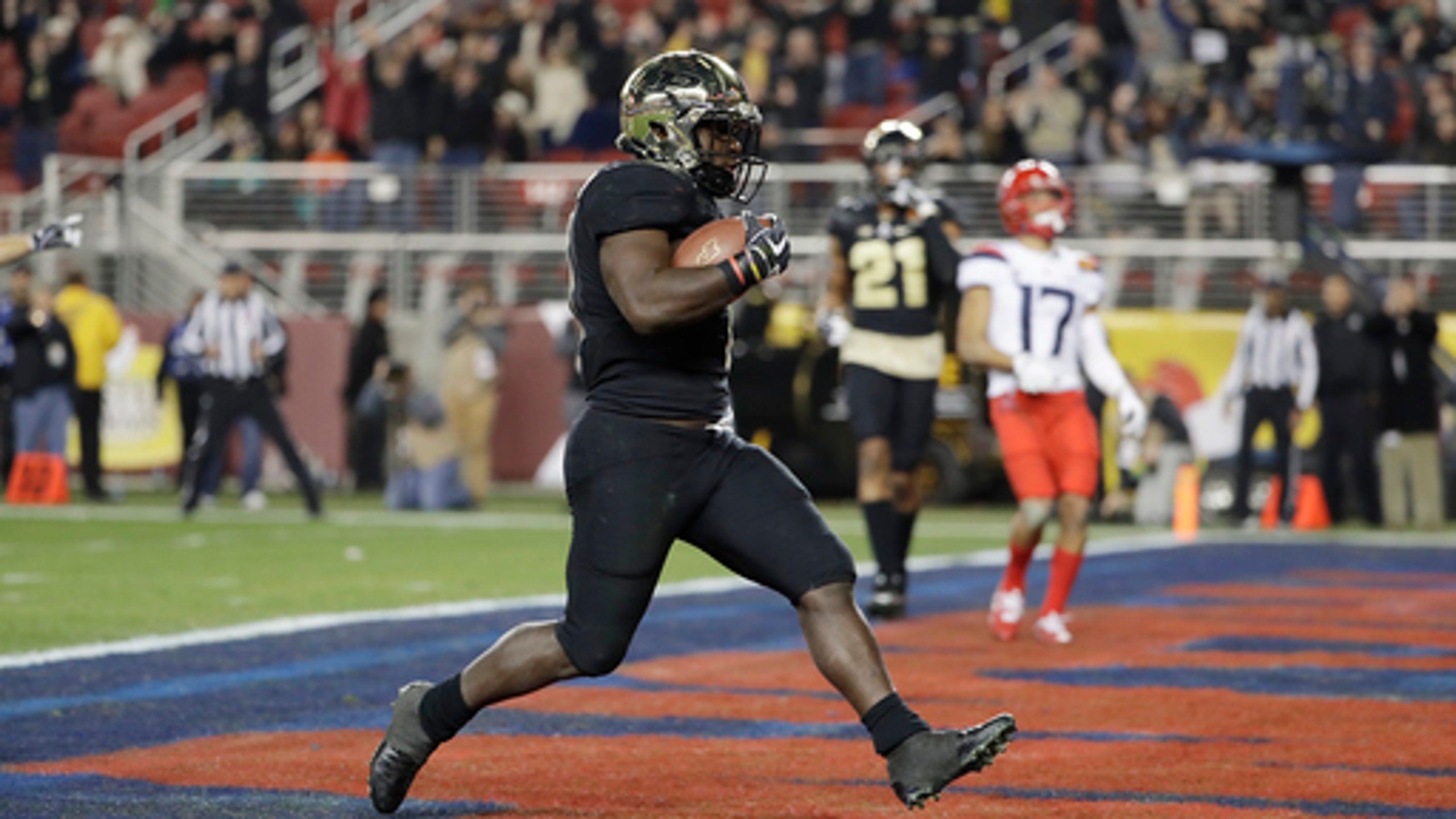 SANTA CLARA, Calif. (AP) When Elijah Sindelar took the field for Purdue's late comeback attempt in a bowl game he thought back on a failed opportunity in a similar situation in the season opener.

The difference from that interception he threw against Louisville to a bowl-game winning touchdown against Arizona sums up the progress the Boilermakers made in their first season under coach Jeff Brohm.

Sindelar threw a 38-yard touchdown pass to Anthony Mahoungou with 1:44 remaining and Purdue capped its most successful season in years in dramatic style with a 38-35 victory over Arizona in the Foster Farms Bowl on Wednesday night.

''I just did not want to do that again,'' Sindelar said about his interception in the opener. ''I remembered that feeling, I was going to try to do everything I could to make sure we didn't have to experience that again.''

The Boilermakers (7-6) had squandered a 17-point halftime lead when Khalil Tate threw his fifth TD pass with 3:21 remaining to give the Wildcats (7-6) the lead.

But Sindelar responded with a 75-yard drive that ended with the deep throw into the end zone to Mahoungou, giving the Boilermakers their first winning record since 2011 and first bowl win over a major conference team since beating Washington in the 2002 Sun Bowl. Purdue had won only nine games in the previous four seasons before Brohm arrived.

''That's a memory you'll cherish for the rest of your life,'' Brohm said ''They definitely earned it because they put in the hard work, have gone through the adversity and continued to hang in there.''

Sindelar threw for 396 yards and four touchdowns, with Mahoungou (118 yards) and Gregory Phillips (149) each topping the 100-yard mark and catching two TD passes.

Tate was just as good, showing he can win with his arm as well as he can with his legs that carried him to 1,353 yards rushing in the regular season. Tate threw for 302 yards and five touchdowns but his late interception to Jacob Thieneman ended the comeback attempt.

''They made one more play than we did at the end to win,'' coach Rich Rodriguez said. ''It's pretty simple. Give them credit but I'm also pretty excited about the future.''

Brohm pulled out all the stops, going for it three times on fourth down, calling a couple of flea-flickers and using an innovative trick play on a fake kneel down to set up a field goal at the end of the first half that made it 31-14.

Purdue: The Boilermakers were dynamic in the 31-point first half, showing off offensive prowess that was rarely seen on a consistent basis during the regular season. The offense stalled mostly in the second half before the winning score. The most promising drive before that ended when Markell Jones got stopped just short of the first-down marker on a fourth-down pass.

Arizona: The Boilermakers managed to keep Tate's electric running in check, holding him to just 58 yards on 20 carries. But that opened up space for him to exploit them with downfield throws and he had career highs in touchdown passes and yards passing.

Arizona was still steaming after the game about the fake kneel down at end of the first half on a play Purdue practiced all season.

The Boilermakers took over at their 32 with 56 seconds left after Tate lost a fumble. Purdue appeared to be taking a knee on the play to run out the clock, but running back D.J. Knox was crouching hidden behind a guard. Sindelar then handed the ball to Knox, who waited a second as the linemen stood and then ran around left end for a 30-yard gain that helped set up the field goal.

Rodriguez thought it should have been a dead play because he said the officials told his players not to rush.

''If the refs tells us it's a kneel it's really a dead play,'' linebacker Tony Fields II said. ''We can't do anything as linebackers or DBs. They don't even want us to rush the quarterback because that's an injury prevention thing. They got us.''

Mahoungou hurt his shoulder the play before his winning catch but wasn't going to leave the game. He drew on a saying from position coach JaMarcus Shephard.

''He says, `Don't tell me how rough the seas are, just bring me the damn ship,'' Mahoungou said. ''So I just had to bring the damn ship.''

Purdue: The Boilermakers will try to build on Brohm's successful first season. They start with a tough conference test when they host Northwestern on Aug. 30.

Arizona: The Wildcats are excited to see what a full season with Tate at quarterback looks like. The 2018 campaign will start at home against BYU on Sept. 1.