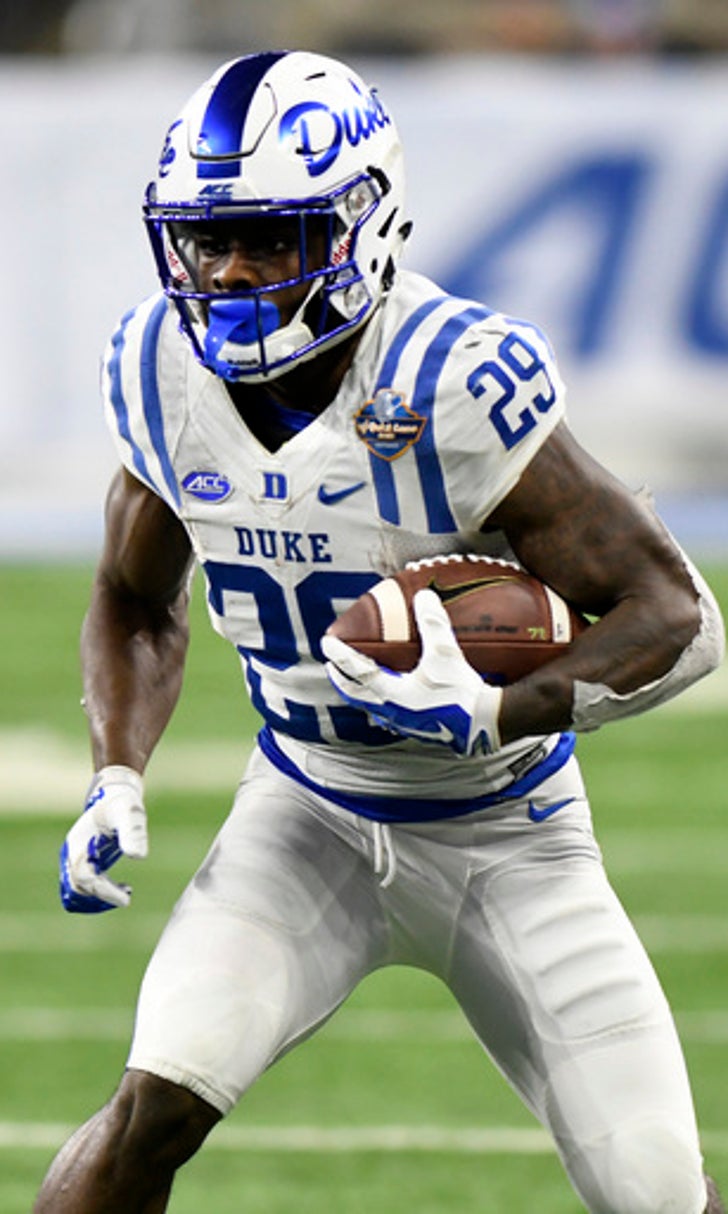 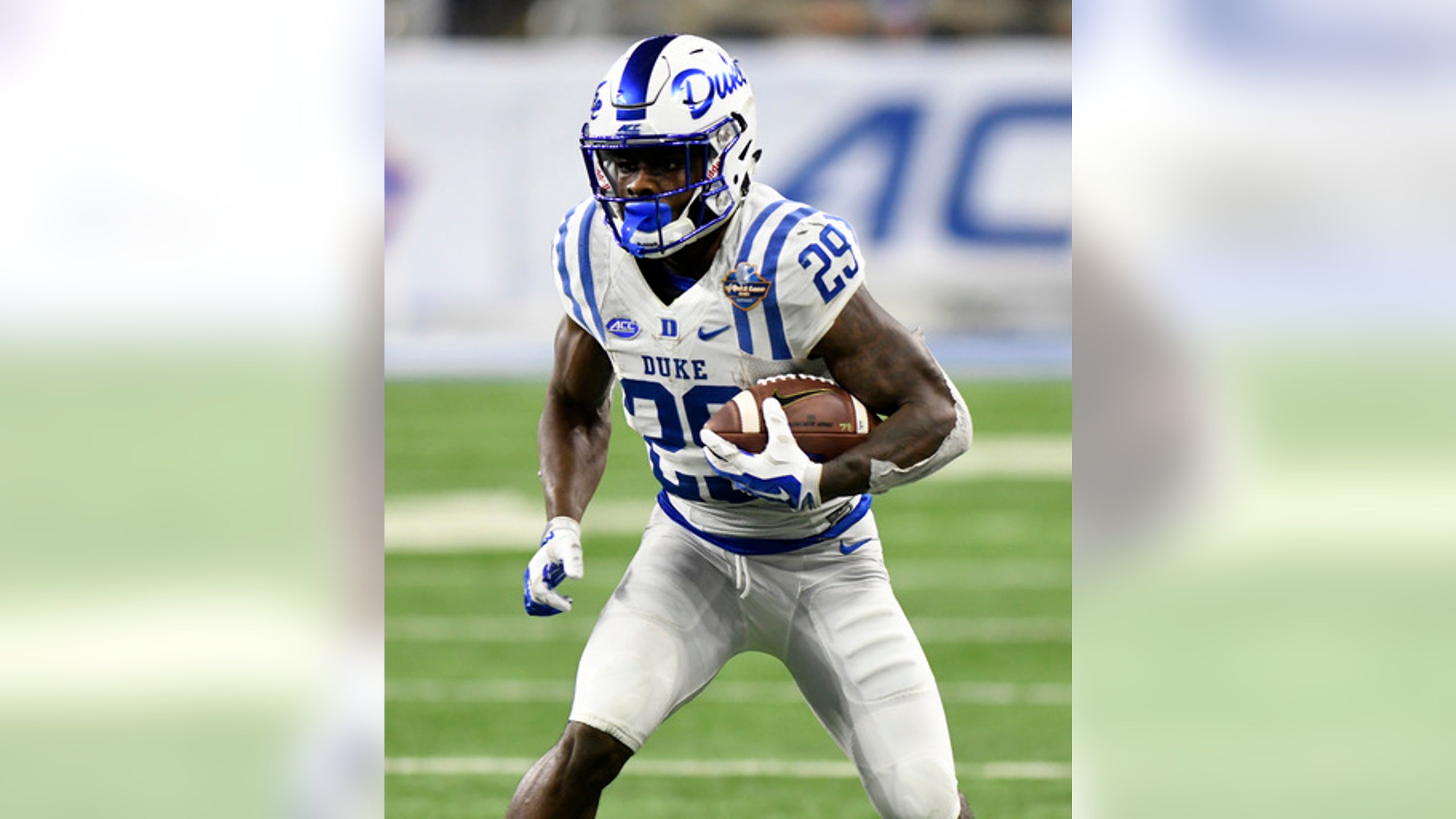 DETROIT (AP) In mid-November, after a loss at Army, the Duke Blue Devils were looking at spending a second straight holiday season at home.

That made Tuesday's success in the Quick Lane Bowl even sweeter.

After a six-game losing streak dropped them to 4-6, the Blue Devils (7-6) had to beat Georgia Tech and Wake Forest just to get bowl eligible. They managed that, got a bid to spend Christmas in Detroit, and salvaged the season with a 36-14 win over Northern Illinois.

''People ask me how we came back from 4-6, especially since we don't have a star player who we could turn to,'' Duke coach David Cutcliffe said. ''I tell them that we have a roster filled with great teammates. They decided they had to work together if we were going to come up with a decent finish.''

''We knew Northern Illinois had a lot of success rushing the passer this year, but our offensive line really controlled things,'' Jones said. ''That really opened things up for our offense.

''We were frustrated after losing to Army, but we were finally able to channel that into motivation.''

''Marcus and I know that this offseason is crucial,'' Harbison said. ''If we work hard, we should have a special backfield next year.''

The Blue Devils took a 14-0 lead in the first quarter, sandwiching rushing touchdowns around a failed Northern Illinois fake punt on 4th-and-18 from their own 11.

''They were being physical with our gunners, so we thought we could get a pass interference and a first down,'' Huskies coach Rod Carey said. ''They didn't bite, and we had a punter throwing to a defensive back.''

The Huskies had two first downs and 46 yards in the quarter, but tied the game with two scores in the first 2:38 of the second. Duke, though, moved back into a 26-14 lead with two touchdowns before halftime.

''We let up for a little while, and they took advantage of our mistakes,'' Duke linebacker Joe Giles-Harris said. ''We knew we had to get focused again, and we shut them out from there.''

Jones fumbled on the first possession of the second half, but Northern Illinois turned the ball back over after a failed fake field goal.

Duke: Other than the start of the second quarter, where they lost defensive focus on back-to-back possessions, the Blue Devils were in complete control.

''They hit a couple big plays against us, and our offense stalled, so we made some adjustments,'' Cutcliffe said. ''We started passing the ball more, which is what we needed, and our defense started making plays.''

Northern Illinois: The Huskies recovered from the disastrous first-quarter fake punt to get back into the game, but couldn't stay with Duke on either side of the ball.

''We were flying around out there, trying to make plays, but we didn't execute our game plan,'' said safety Mycial Allen, who was playing in his hometown. ''Duke came up with the big plays and we didn't.''

The Blue Devils were startled by Carey's decision to run a fake punt in such a tough spot, especially in the first quarter of a 7-0 game.

''That was a very risky move,'' Cutcliffe said. ''We're going to jam their gunners at the line, just like in press coverage, but we aren't going to hit them after that. That means you have to complete the pass to get a first down, and that's not easy to do.''

Duke: By winning their final three games, including Cutcliffe's second bowl victory in 10 seasons at Duke, the Blue Devils take some momentum into the offseason.

Jones will be back as a junior next season, while Brown is expected to replace Wilson as the No. 1 running back.

''We showed a lot of mental toughness to finish this season with three wins instead of rolling over and losing the last two games,'' Jones said. ''This is an exciting way to go into the offseason.''

Northern Illinois: After winning at Nebraska, the Huskies thought they were on the verge of another big season. However, conference losses to Toledo and Central Michigan knocked them out of MAC title contention and they were overmatched against Duke.

''This is disappointing, but we're going to have a good group of players coming back next year,'' Carey said. ''We can build on this.''

''A month ago, no one thought we had a chance at a bowl game, so this was a great way to finish the season,'' said Giles-Harris, who was named First-Team All-ACC as a sophomore.

North Carolina Fans Get Their Prize
The wait is over, UNC faithful. Your billboard has landed smack dab in Durham, North Carolina, for all Duke fans to see.
January 16