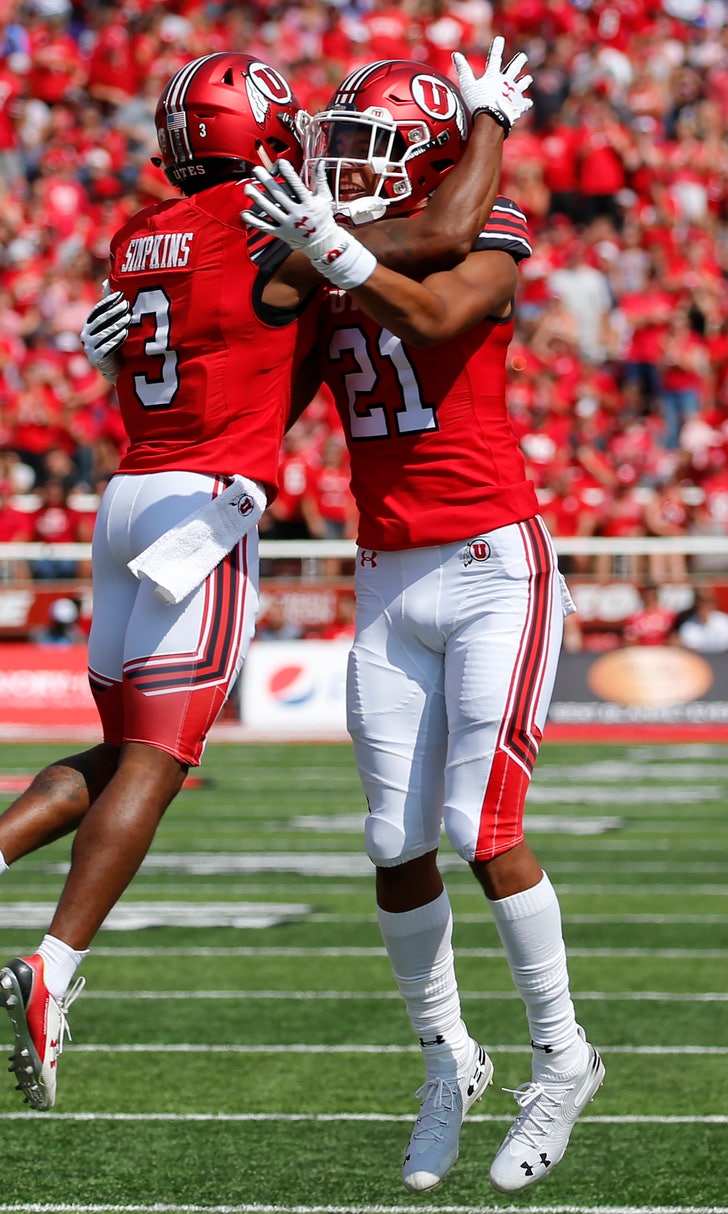 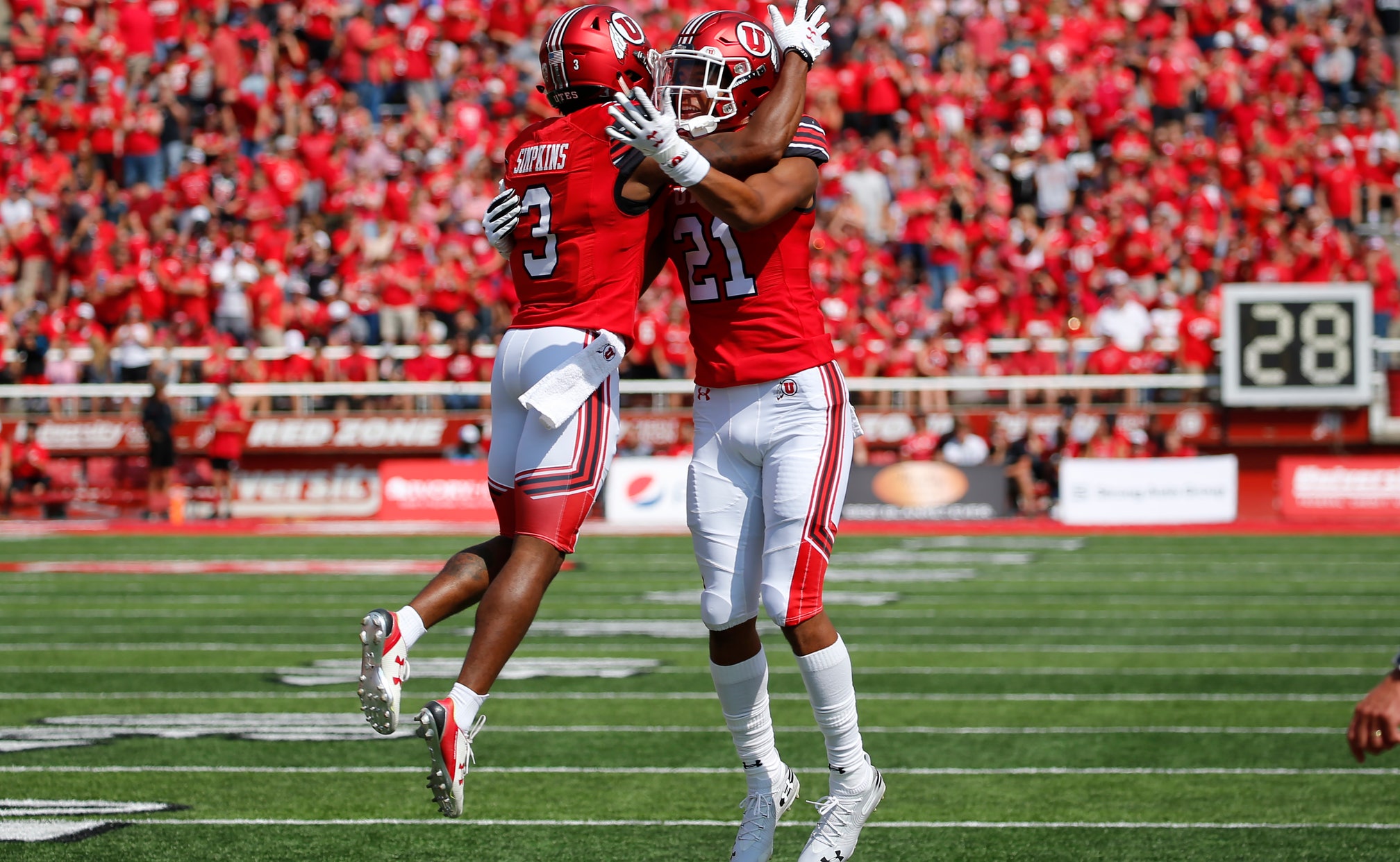 SALT LAKE CITY (AP) — Four years ago, three talented players from Hallandale High School in the Miami area became enchanted with the mountains of Utah. Now the group, who has been dubbed the Hallandale Trio, has the Utes poised to reach new heights.

Tyler Huntley, Zack Moss and Demari Simpkins each had rushing touchdowns for the No. 13 Utes in a 35-17 win over Northern Illinois on Saturday.

Moss, who rushed for 80 yards and scored twice, had a chance to go in the NFL draft but wanted to come back and see what he and his teammates, especially his childhood friends, could do this season.

"It was really cool to see us all get into the end zone," Moss said.

Moss has been the focal point of the Utes offense, but it was Huntley who was the engine that powered the Utes over the Huskies, coupled with a defense that held the NIU attack to 69 yards in the second half. An effective pass rush, an interception and a fourth-down stop shackled the Huskies.

"We didn't play our best football defensively in that first half. Offensively, however, we did. We played very well from start to finish. I thought Tyler was outstanding," Utah coach Kyle Whittingham said.

Huntley finished 14 for 19 for 214 yards and ran for 38 yards, without a sack for second straight game.

"The coaches are asking more of me," the senior quarterback said. "Every time we come to the line I am ready to get us into a better play for the offense to execute. I take great pride in putting us in the best position."

Northern Illinois (0-2) kept pace with Utah (2-0) in the first two quarters with an effective mix of short passes and QB runs. Bowers had 202 yards passing to eight receivers from a variety of formations as the vaunted Utes defense couldn't seem to predict where the each pass was going.

Last year, the Huskies kept Moss to 66 yards, his lowest rushing total of the season as Utah edged NIU, 17-6, in DeKalb. Moss, tops in the nation for yards after contact the past couple years, carried tacklers on nearly every play as the Huskies keyed on the Utes running back. That opened the field for Huntley and the receiving corps, who only saw 16 pass plays in the season opener against BYU. There were only a few more throws against NIU but six went for 20 yards or more.

Early on, NIU was rolling. After going 5 for 5 and 52 yards passing on NIU's first scoring drive, Bowers waited for a key block and somersaulted into the end zone over late-arriving Utes tacklers.

"I was getting a lot of great protection. I thought our receivers played really, really hard. I thought they did a good job of pressing Utah's secondary," said Bowers, who finished 20 of 29 with 229 yards passing.

New Huskies coach Thomas Hammock suffered his first loss as NIU has never defeated a team ranked as high as Utah. For the second straight season, the Huskies made the Utes sweat, beyond what was expected with the 11 a.m. start and temperatures in the 80s under sunny skies.

"We had some different type of run/pass options for the quarterback and they were giving us looks to throw the ball that were advantageous," Hammock said. "The quarterback and receivers did a great job taking advantage of what the defense was giving us."

Midway through the second quarter, the score was tied at 14-14. Spencer Tears flashed an upside-down 'U' with his hands after catching a 74-yard reception, drawing vociferous boos from the north end zone fans.

Vonte Davis — in at safety for injured Ute Julian Blackmon, who later returned and had an interception — underestimated Tears' speed as the wideout stepped out of his tackle and raced down the NIU sideline. It was NIU's longest pass play since Tears had an 81-yard scoring reception against San Diego State in 2017.

"We came out with a more ticked off attitude after they scored like that on us in our home stadium," said Bradlee Anae, who had three sacks and a forced fumble as Utah stopped the Huskies on all six third-down attempts in the second half.

Whittingham said the defense tightened up their coverages and dialed up the pressure in the second half.

"Playing behind a defensive line like that makes it easier. The quarterback has to get the ball out and that is why we get our picks," Blackmon said.

The Utes, who were the media's preseason choice to win the Pac-12, had just one penalty and hasn't turned the ball over this year. The offensive line played without two starters with leg injuries, Orlando Umana and Johnny Maea.

NIU's Mykelti Williams was ejected for targeting in the fourth quarter after his big hit caused a fumble that was negated by the penalty. On the next play, Huntley found Jaylen Dixon for a 14-yard TD pass.

Even though Utah is a team known for their defense, the Hallandale Trio looks to inject themselves into the Utes identity.

"Those three guys are terrific. They have been just great teammates and great team players since they got here. They are disciplined, they are talented and they work hard," Whittingham said. "They are all graduating this December. They have done everything we have hoped they would and more since they have been here."

The Utes continue to play mistake-free football but the modest score against a Group-of-5 opponent may not make a big impression on the voters.

Northern Illinois: The Huskies had one of the nation's top defenses befuddled until the Utes made some crucial adjustments in their pass defense and pressures.

Utah: The Utes haven't lost a home opener since dropping the 2007 debut to Air Force, 20-12. It wasn't pretty early, but the Utes had a balanced attack of 214 passing and 193 yards rushing and the outcome wasn't in doubt after Moss's 5-yard TD run in the third quarter. "That's the goal every week for the run game to help the pass game and the pass game to help the run game," Moss said of the balanced attack.

Utah: The Utes complete their preseason schedule without leaving the state by hosting Idaho State on Saturday.