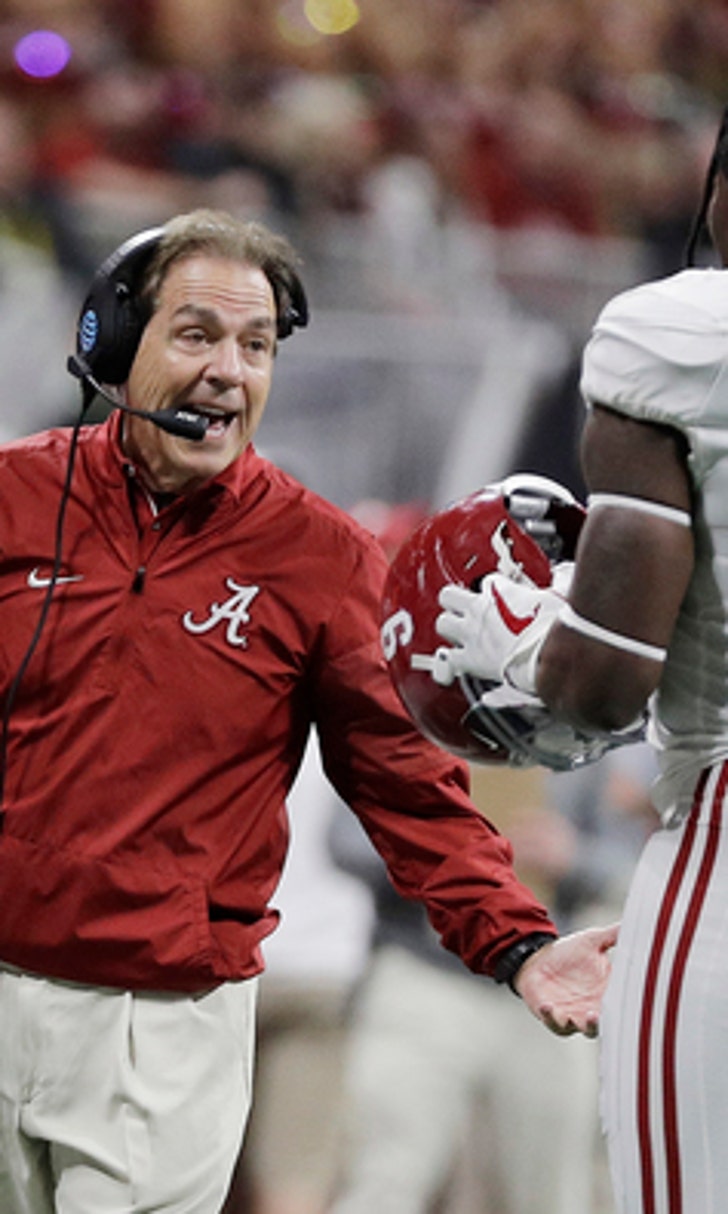 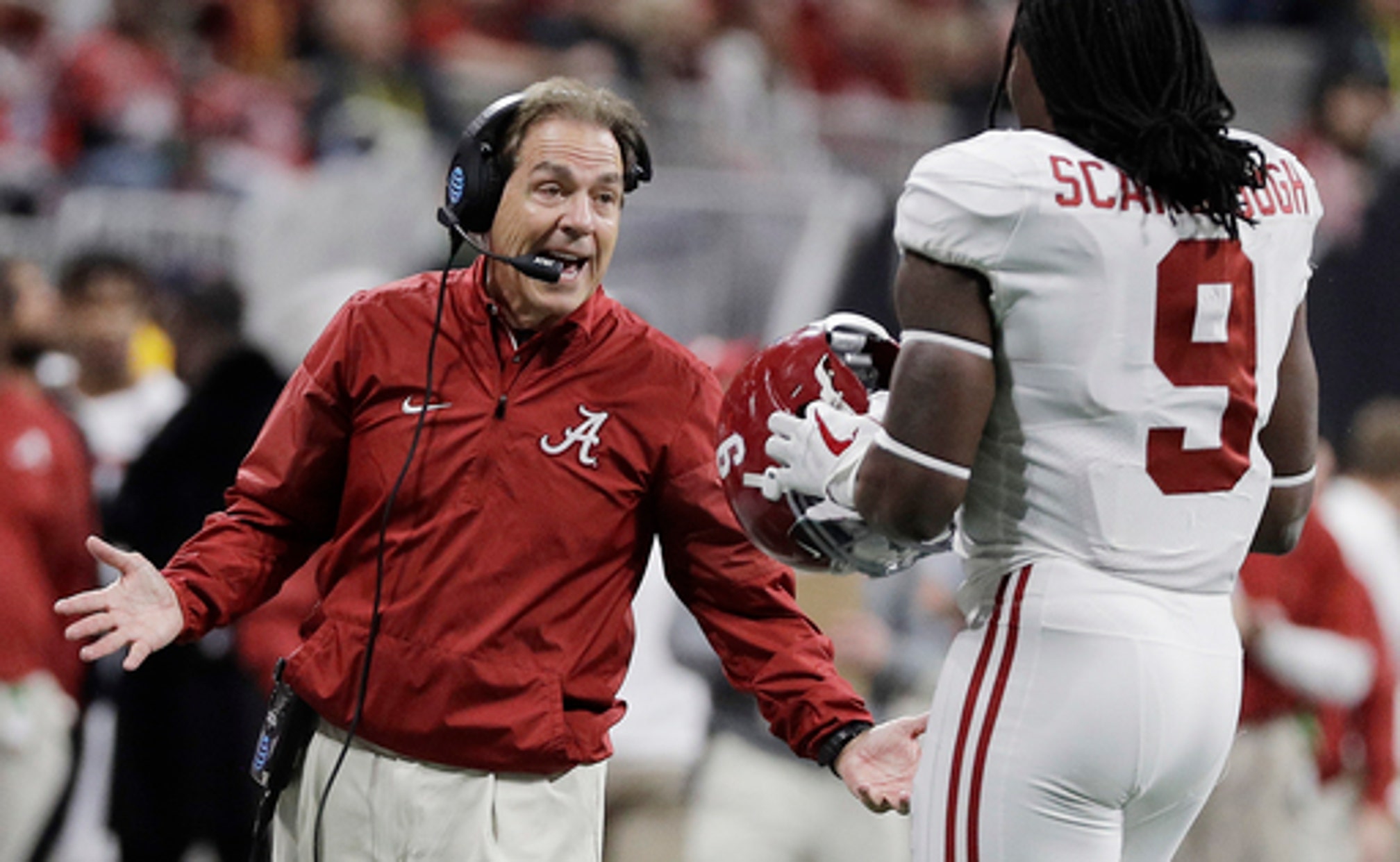 Column: Nick Saban's 6th championship is the best of all

ATLANTA (AP) Nick Saban saved his best for No. 6.

He's won plenty of national titles with better players than everyone else.

This time, it was all about the coach.

If there was ever any doubt that Saban will go down as the greatest ever to prowl a college sideline, it was totally erased with the championship that pulled him even with the Bear.

In a most un-Saban-like move, he switched quarterbacks at halftime of the national championship game, the kind of desperate ploy you might expect from a brash young up-and-comer, not a 66-year-old all about the methodical process - covering every base, accounting for every scenario, winning over and over again without a lot of drama.

Tua Tagovailoa, a ukulele-playing, left-handed freshman from Hawaii, took the field at the start of the third quarter with Alabama trailing 13-0 and doing absolutely nothing on offense. The Tide had accounted for just four first downs and 97 yards with two-year starter Jalen Hurts taking the snaps, but it was a bold decision nonetheless by the wily ol' coach.

After all, this was the biggest game of the season, and Hurts was the one who led Alabama there for the second year in a row. He's a proven winner, having lost only two out of 28 games coming into Monday night, and it certainly would've been the safe bet to stick with him a little longer.

But Saban - who refuses to let the game pass him by even as coaches young enough to be his sons keep attempting to take him down (including former assistant Kirby Smart, who now coaches Georgia) - switched to Tagovailoa without hesitation.

It might go down as the greatest decision in a career filled with them.

Tagovailoa completed 14 of 24 passes for 166 yards and three touchdowns, the last of them a 41-yard strike in overtime to DeVonta Smith that gave Alabama a 26-23 victory over Georgia on Monday night.

''We've had this in our mind that, if we were struggling offensively, that we would give Tua an opportunity, even in the last game,'' Saban said. ''No disrespect to Jalen, but ... I thought Tua would give us a better chance and a spark, which he certainly did.''

The Tide rallied from a pair of 13-point deficits, and managed to pull it together after Andy Pappanastos shanked a 36-yard field goal try that would've won the game on the final play of regulation. Georgia went on offense first in overtime and, after Jake Fromm took a huge sack, the Bulldogs settled for Ricardo Blankenship's 51-yard field goal.

Alabama's offense took the field and immediately fell into a huge hole. Georgia sniffed out a screen pass, Tagovailoa couldn't pick up his next option and Georgia dumped the youngster for a 16-yard loss.

One play later, the Tide was national champions.

With the poise of a veteran, Tagovailoa looked to his right, causing the Georgia safeties to slide toward that side of the field. Then he swung the other way, launching a pass to Smith streaking down the left sideline. He ran right by cornerback Malkom Parrish, who clearly thought he had help from safety Dominick Sanders, and hauled in a pass that was delivered in stride as he glided all alone into the end zone.

Saban has now won five national titles in his 11 years at Alabama, and his first season doesn't really count since he had to rebuild a program that had become a laughingstock under a string of mediocre coaches. When you throw in a BCS title from his time at LSU (albeit a shared title, since Southern Cal was voted No. 1 in The Associated Press poll), he's matched Bryant for the most championships by any coach.

And, really, Saban has the edge.

One of Bryant's titles comes with a huge asterisk. In 1973, the Tide finished No. 1 in the coaches' poll, which was finalized before the bowls. Alabama went on to lose to No. 2 Notre Dame 24-23 in the Sugar Bowl, giving the AP title to the Fighting Irish.

Let's be honest, nobody outside of Tuscaloosa and the Bryant family views that team as the best in the land.

Another feather in Saban's cap is the way he's won his championships. During the 2011 season, the Crimson Tide stifled LSU 21-0 with one of the great defensive performances in college football history. Two years ago, Alabama needed a dynamic offense and great special teams play to pull out a 45-40 victory over Clemson.

This time, he had to make a change right in the middle of the game at the most prominent position on the field.

That's a new one, even for Saban.

Saban shows no signs of slowing down or giving the least bit of thought to retirement. He'll celebrate this title like he did all the other ones, for about 24 hours before he gets back to work in pursuit of No. 7.

''Every team wants to be successful,'' he said. ''The message to the team tonight after this game was I hope you take something from this game and the resiliency that you showed in this game and it helps you be more successful in life.

''It's not just about winning the championship,'' Saban added, no doubt remembering a final-second loss to Clemson in last year's title game. ''I know that's what you all write about and what you talk about and all that. We like winning, and we hate losing. But there's more to it than that.''

Winning sure makes it a lot more fun, though.

As Smith hauled in the title-clinching pass, Saban ripped off his headset, threw his arms in the air and let out a bit of a scream.

For once in his life, he seemed caught off guard.

It only lasted a moment.

''I couldn't believe it,'' Saban said, shaking his head and repeating himself.

College Football's Top Plays: Week 8
From Indiana's stunning win to Ohio State's dominance, check out the best moments from the biggest Saturday so far!
9 hours ago