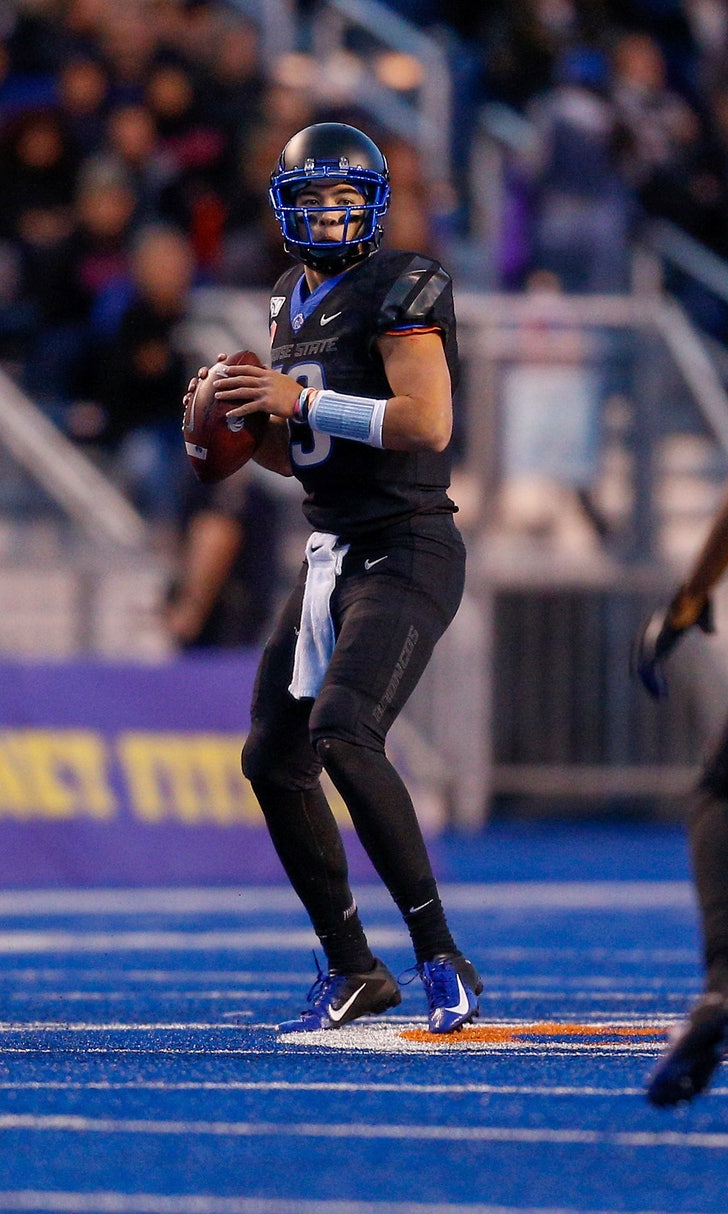 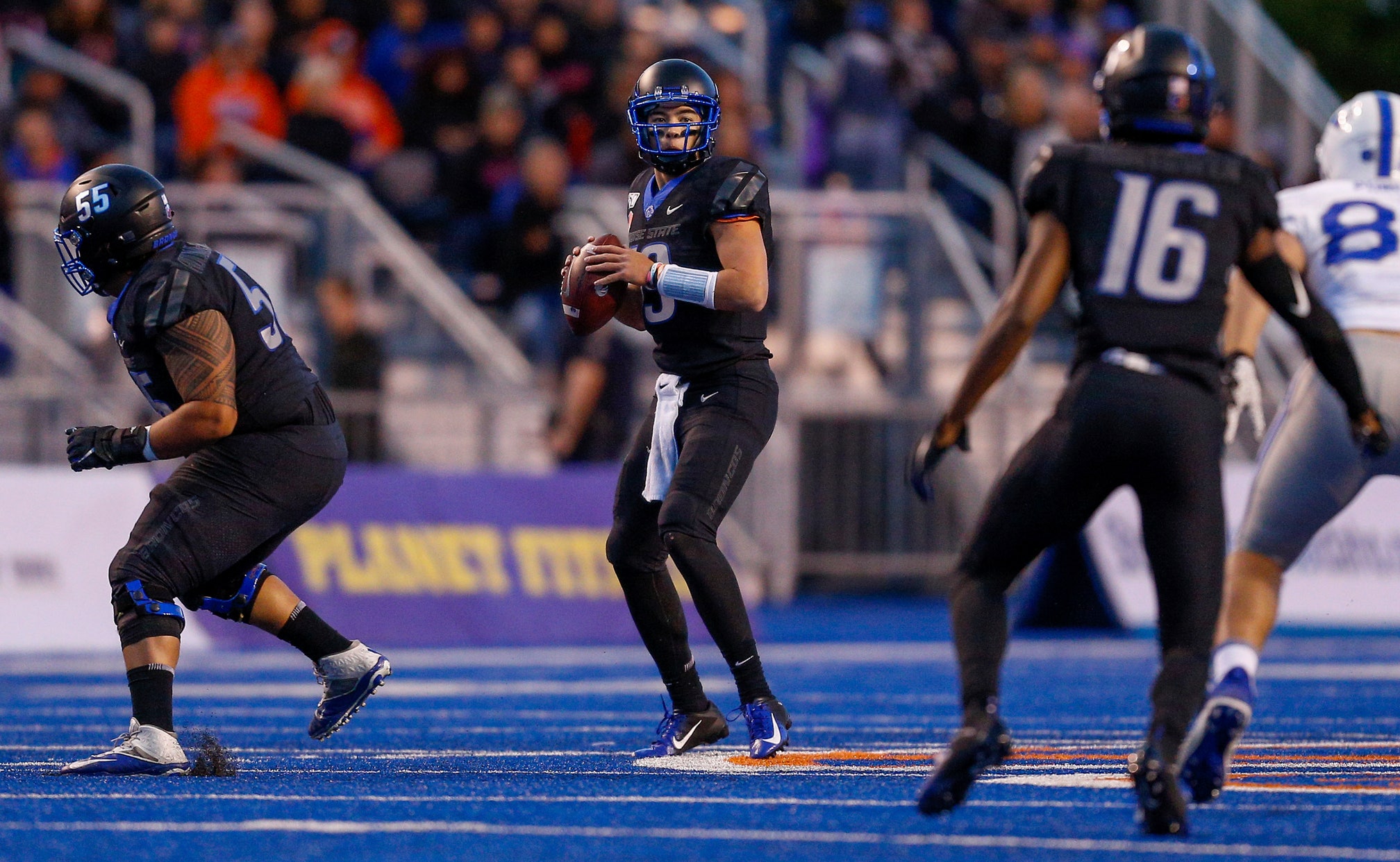 And the Broncos' defense? It continued to stymie opponents in the second half, even if it finally gave up some points.

Bachmeier threw for 263 yards and two touchdowns, Mahone rushed for a pair of scores in the fourth quarter, and Boise State pulled away in the second half for a 30-19 win over Air Force on Friday night.

Bachmeier's arm made up for a Broncos' running game that was ineffective until the fourth quarter. He hit CT Thomas on a 36-yard touchdown pass in the first half while getting crunched by a defender, and added a 28-yard TD toss to tight end John Bates late in the third quarter to give the Broncos a 17-13 lead.

Mahone added a pair of 10-yard TD runs in the fourth as the Broncos (4-0, 1-0 Mountain West) won their 20th straight conference opener.

Bachmeier was 19 of 26 passing in another impressive performance by the freshman in just his fourth start.

"He came back in the second half even better. He's a strong kid back there in the pocket. He took a couple of licks, but he gets right back up," Thomas said.

Air Force quarterback Donald Hammond III had an 8-yard touchdown run in the first half and threw a 31-yard TD to Geraud Sanders late in the fourth quarter. Taven Birdow led Air Force (2-1, 0-1) with 67 yards rushing, but the second-best rushing attack in the country was held to 242 yards, more than 100 yards under its season average.

Bachmeier also got help from his receivers, who made terrific catches. Thomas, who had a career-high 119 yards receiving, made a diving 29-yard catch to set up Eric Sachse's 40-yard field goal in the first half. John Hightower made a juggling reception surrounded by two defenders on a key third-down in the fourth quarter, and Mahone scored on a 10-yard TD run on the next play to give the Broncos a 23-13 lead.

"We knew coming into the game Air Force does a great job being physical," Thomas said. "Our mindset was we had to compete for the ball, every ball that comes our way."

Tied 10-10 at halftime, Hammond spent the start of the second half in the injury tent while Isaiah Sanders took over at quarterback. Sanders led the Falcons to a 32-yard field goal by Jake Koehnke midway through the third. It was the first second-half points allowed this season by the Broncos.

Bachmeier responded with his best drive of the night, taking the Broncos 77 yards in 11 plays, capped with the TD pass to Bates. The biggest play of the drive was Bachmeier's 13-yard strike to Akilian Bulter on fourth-and-10 at the Air Force 38. Two plays later, Bates was in the end zone and Boise State was ahead for good.

Air Force was stopped on fourth-and-1 at the Boise State 48 on the next possession and the Broncos answered with the first of Mahone's TD runs.

Bachmeier had been hit a lot through the first three games, and continued to get battered in the first half. He was sacked only once in the first half, but took a handful of big hits as protection broke down. His willingness to take a hit, though, can lead to big plays, like the Broncos' first touchdown. Bachmeier allowed Thomas to develop his route and hit the speedy receiver on a 36-yard touchdown to give the Broncos a 10-7 lead.

Koehnke's field goal with 6:29 left in the third quarter was the first points scored against Boise State's defense in the second half this season. The Broncos held Florida State, Marshall and Portland State scoreless in the final 30 minutes of the first three games. Boise State went 98 minutes, 31 seconds of combined second-half action before allowing points.

Air Force: The Falcons were unable to keep the momentum from last week's upset win at Colorado and still have not beaten a ranked team on the road since winning at California in 2002.

Boise State: It's a result of facing a run-first team, but Boise State nose tackle Sonatane Lui set a career-high with 16 tackles. Lui had eight combined tackles through the first three games. ... Pass rusher Curtis Weaver didn't have a sack after having four last week against Portland State.

Boise State: The Broncos have an open weekend and next play at UNLV on Oct. 5.