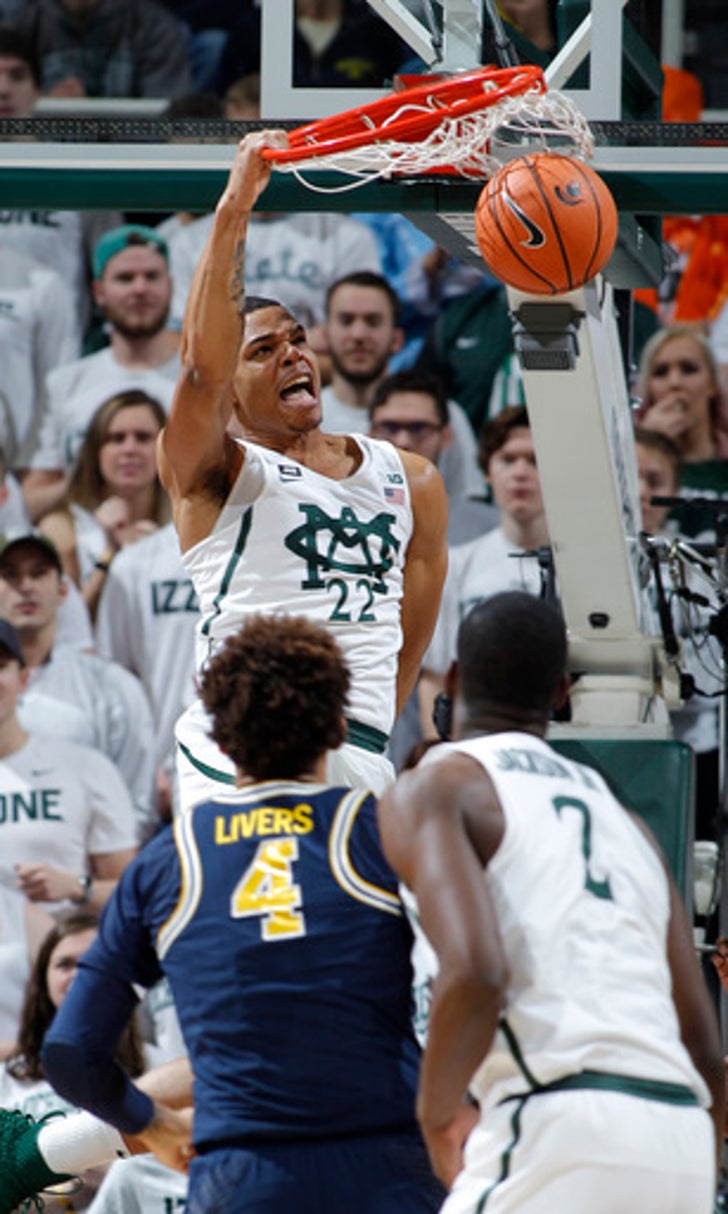 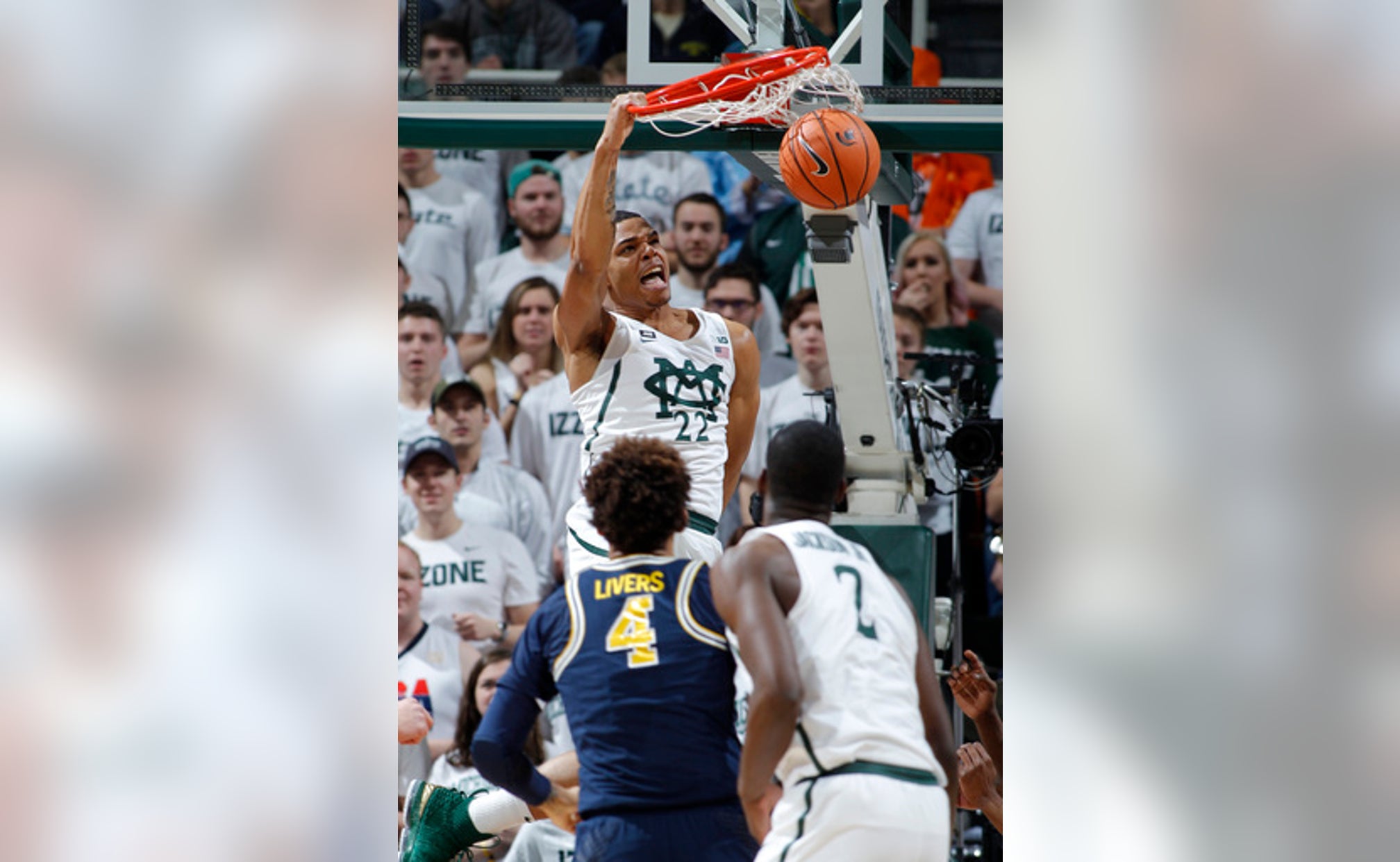 EAST LANSING, Mich. (AP) Moritz Wagner flicked his right wrist, made a 3-pointer and pressed his right index fingers against his lips.

And, there wasn't anything Michigan State players or fans could do about it.

Wagner scored a career-high 27 points, lifting Michigan to an 82-72 victory over the fourth-ranked Spartans on Saturday.

Making his performance even more impressive, he played through a lingering injury.

''We didn't know if Moe would play,'' coach John Beilein said. ''He tweaked the ankle. We have a trainer, Alex Wong, who needs a shout-out for this one.''

Wagner was 8 of 13, making 3 of 4 3-pointers, and shot over and drove past every player who attempted to defend him.

''He's a pick-and-pop guy and it's tough to guard him,'' Michigan State's Miles Bridges said. ''We could tell he really wanted that game.''

Wagner, who was jeered by the fans before it was clear Michigan was going to win, celebrated the victory by shouting with joy and bouncing around the court.

Michigan State coach Tom Izzo compared Wagner to former Spartans guard Scott Skiles, who taunted the Wolverines while scoring against them in the mid-1980s.

The Wolverines (15-4, 4-2 Big Ten) have won eight of nine games this season and two straight against their rivals.

The Spartans (16-3, 4-2) are struggling, losing two of three games with an overtime win over Rutgers in between the setbacks.

''We have to do some soul-searching,'' Izzo acknowledged.

Zavier Simpson made a go-ahead layup with 14:28 left, the 13th lead change in an intense game with 11 ties. He helped the Wolverines pull away in the final minutes with enough free throws to keep a cushion. Simpson finished with 16 points, taking advantage of a game plan that called for him and his teammates to drive toward the basket against a shot-blocking team.

''Our guards could not get over the screens,'' Izzo said.

Bridges had 19 points, six rebounds, five assists and two steals. Bridges gave up the ball four times as one of many turnover-prone Spartans. Michigan scored 26 points off Michigan State's 18 turnovers.

''It's going to be tough for me to live this down,'' said Bridges, who will not play the Wolverines again unless they meet in the Big Ten or NCAA Tournaments - if the sophomore star enters the NBA draft as expected.

Jaren Jackson had 19 points and six blocks, limited by foul trouble for the Spartans. Nick Ward was limited to four points and had three turnovers, getting outplayed by Wagner.

''They just wanted it more than we did,'' Bridges said. ''They played harder and played tougher.''

Michigan made 27 of 32 free throws after connecting on fewer than 65 percent of their free throws before the game.

Michigan State's Gavin Schilling made the crowd roar with a dunk over Isaiah Livers , but Beilein was able to keep his team calm and composed because he tells his players not to worry about giving up a dunk or having a shot blocked.

The Spartans made their first 3-pointer with 6:25 left and finished 3 of 13. They entered the game averaging nine 3-pointers and 22 attempts beyond the arc.

Michigan: The Wolverines proved they can compete with, and beat, the Big Ten's best teams this week. They lost by only one point at home Tuesday against No. 5 Purdue. Instead of shooting a lot of 3-pointers, they are taking the ball to the basket to set up long shots and force teams to defend them all over the court.

''It doesn't mean anything if we can't continue this trend,'' Beilein said.

Michigan State: The Spartans will get a five-day break before playing again and they need time to figure out what has gone relatively wrong. They had won 14 straight, ending with a 30-point win over Maryland, before a lopsided loss at Ohio State, an overtime win against Rutgers and a closely contested game against Michigan in which they often looked confused on offense and porous on defense.

''This will hurt for a day or two,'' Izzo said. ''I'm going to address a couple guys on the grit that you have to have to play with in the Big Ten.''