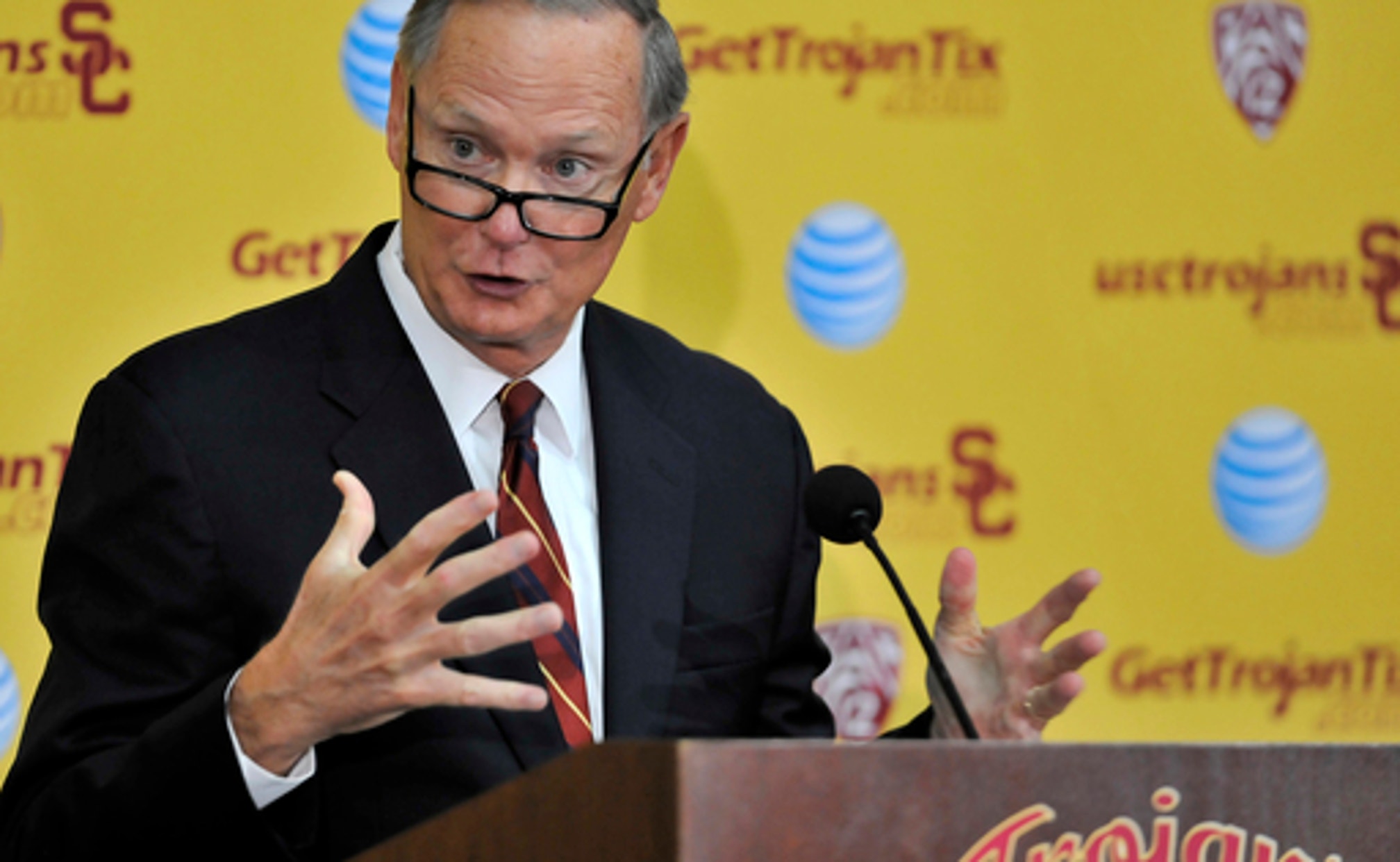 USC athletic director Pat Haden to step down in June 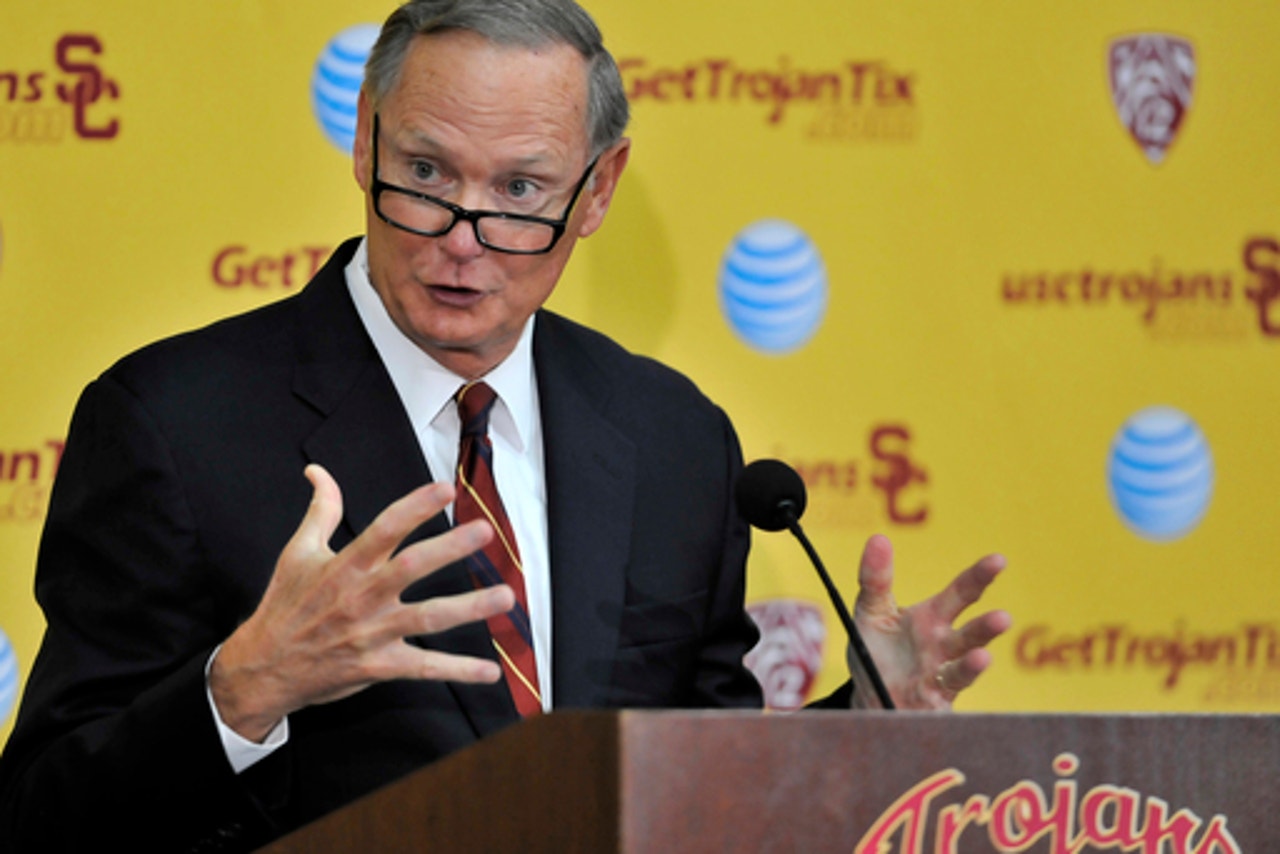 LOS ANGELES (AP) The University of Southern California hired Pat Haden to guide its storied athletic department through the toughest time in its history.

With that job largely done, USC's athletic director and dedicated Trojan decided he was ready for another role.

Haden will retire on June 30, school president Max Nikias announced Friday. Haden, the 63-year-old former USC quarterback, will start a one-year job guiding the renovation of the Coliseum after leaving the athletic department.

''Pat has accomplished USC's objectives here through his distinct blend of integrity, energy, wisdom, and character,'' Nikias said in a letter announcing the decision.

Haden has run USC's athletic department for 5 1/2 years, taking over from Mike Garrett in 2010 with a primary mandate to lead the Trojans through a multiyear stretch of NCAA sanctions against its vaunted football program.

''It has been a tremendous honor serving my alma mater, a school I love so much, as well as serving Max Nikias, our coaches and staff and, most importantly, our student-athletes,'' Haden said. ''I am proud of what has been accomplished here the past six years and knowing that USC Athletics is on an upward trajectory. I look forward to finishing out this academic year as athletic director and then spending time on the Coliseum project.''

Haden created a large NCAA compliance program and improved graduation rates and grade point averages across the athletic department. Nikias said Haden's department restored the school's good working relationship with the NCAA while also raising over $400 million during his tenure.

The ex-quarterback also made a point of encouraging athletes to enjoy their college experience outside of athletics. Overall, Haden took on extraordinary responsibilities for many aspects of the athletic department, and his health declined in recent years.

''He took on this role at a time when the department faced unprecedented pressure, externally and internally, requiring nothing less than a Herculean effort to rebuild its foundation for the long term,'' said Nikias, a close friend who started his job on the same day Haden took over the department.

USC is about to embark on an extensive renovation of the 93-year-old Coliseum, which will be the home of the NFL's Los Angeles Rams this fall. Haden played for the Rams from 1976-81 before becoming a broadcaster, a practicing attorney and a successful partner of a private equity firm.

Haden cited unspecified health concerns when he stepped down from the College Football Playoff committee last October, two weeks after he felt lightheaded and required medical assistance on the sideline during USC's football game at Notre Dame. The AD wasn't specific about his health problem, but he has a pacemaker.

Haden made four football head coaching changes during his tenure, starting when he fired Lane Kiffin at the airport five games into the 2013 season. Ed Orgeron and Clay Helton held the job on an interim basis before Haden chose Sarkisian, only to fire the former USC assistant last season.

Haden has endured criticism for the powerful football program's relative underachievement, winning no Pac-12 titles during his tenure. The school also is still extricating itself from the tenure of Sarkisian, who has sued the school over his firing.

Sarkisian alleges he should have been allowed to keep his job while seeking treatment for alcohol abuse, but Haden fired Sarkisian in October and eventually promoted Helton to the full-time job. Haden made the move before the Pac-12 title game, bypassing the chance to pursue higher-profile candidates during bowl season.

Haden's choice of Andy Enfield to lead the men's basketball program also wasn't universally lauded, but the Trojans are 18-5 and off to their best start since 1992 after routing UCLA 80-61 on Thursday.

USC has won 10 national championships in other sports during Haden's last five years, second only to the University of Florida in that span.