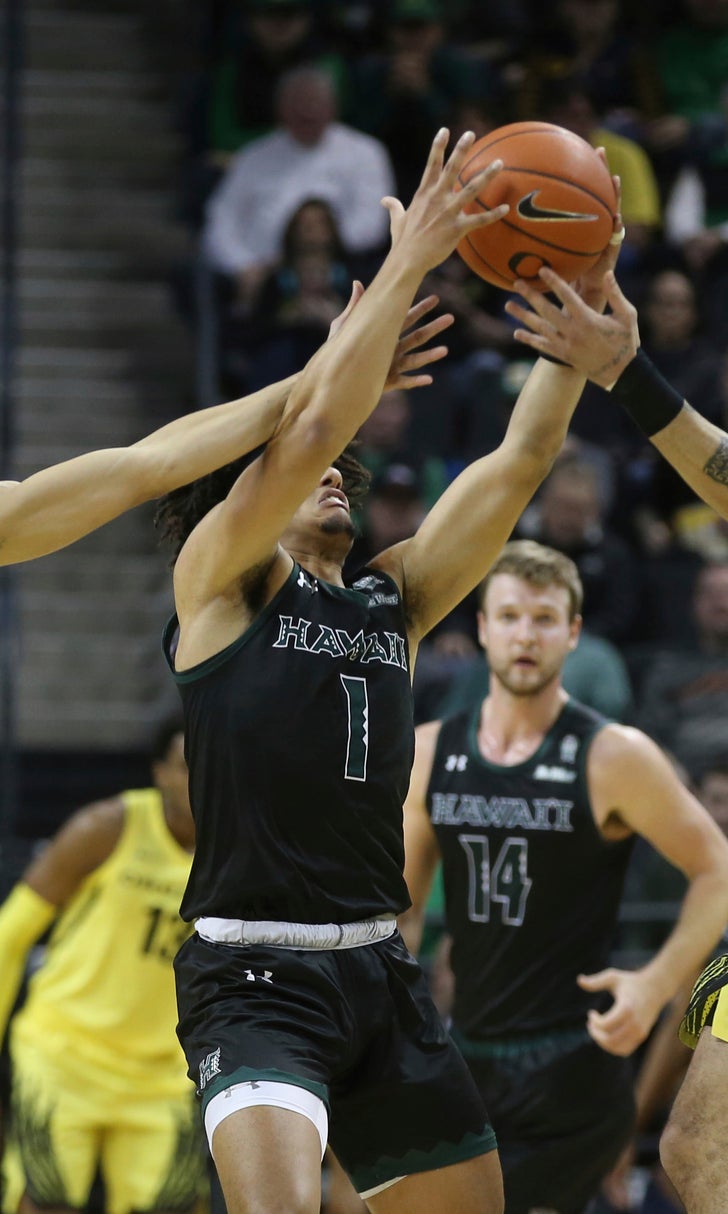 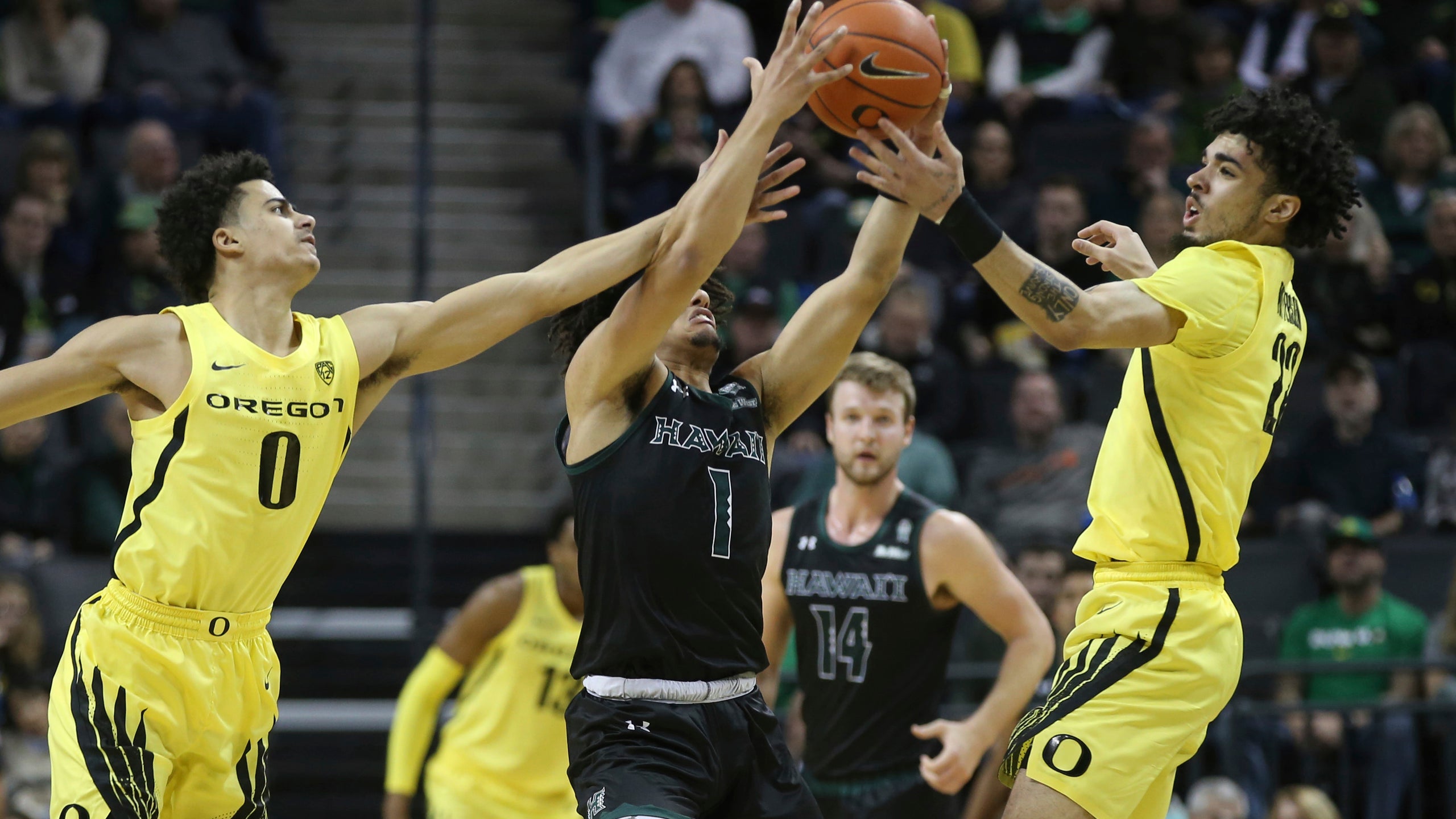 EUGENE, Ore. (AP) — Guard Will Richardson had a simple explanation for the difference between halves in No. 13 Oregon's victory over Hawaii.

“Just the energy,” he said, “and picking up the intensity on defense."

Payton Pritchard had 20 points and a season-high 11 assists, and the Ducks snapped a two-game losing streak with an 89-64 victory over the Rainbow Warriors on Saturday.

The teams were tied at 34 at the break but Oregon (7-2) opened the second half with a 20-1 run to pull away. The Ducks led by as many as 27 points down the stretch.

“We were standing around, kind of like in practice this week. We didn't have a great week in practice, and we were pretty stagnant, I thought, in that first half. The second half I just thought we played with a lot more energy,” Altman said. “Payton hit two big 3s to start, and it just kind of got us going. We needed a kick-start there.''

Eddie Stansberry led Hawaii (6-3) with 24 points, including a career-high seven 3-pointers. The loss snapped a three-game winning streak for the Rainbow Warriors.

The victory snapped a five-game Hawaii winning streak over the Ducks in the all-time series. The last win for Oregon came in the 1974-75 season.

Oregon had dropped its last two games, against No. 8 Gonzaga on Nov. 28 and No. 6 North Carolina the next day at the Battle for Atlantis in the Bahamas.

Oregon was without starting forward Shakur Juiston because of a lower leg injury. He was averaging 8.8 points and 6.5 rebounds a game.

“I thought they came out ready to play in the second half. I thought we were slow starting in the half on both ends of the floor. They went on a run over the course of the first few minutes and we never really responded, or got ourselves back on track after that. All credit to them, they came out the right way in the second half, and we need to be better coming out of the locker room. There's no moral victories in being tied with them at halftime," Hawaii acting coach Chris Gerlufsen said.

The Rainbow Warriors were coming off a 58-41 victory over Hawaii Pacific.

Hawaii jumped out to a 13-5 lead over the Ducks early after Stansberry's 3-pointer. Pritchard's 3 midway through the opening half pulled the Ducks into a 17-all tie, but Oregon was not able to go ahead until Anthony Mathis' 3-pointer made it 22-20.

Oregon's lead was short-lived, though. Stansberry answered with a 3 of his own to put Hawaii back in front.

Pritchard's layup and free throw put Oregon ahead 32-28 with a little more than two minutes left in the half, but the teams were tied up at the break.

Stansberry had 14 of his points, including four 3-pointers, to lead all scorers at the half. The senior guard went into the game averaging 18.8 points.

Pritchard opened the second half with a pair of 3s to kick off the Ducks' big run that gave them a commanding 53-35 lead.

Hawaii has been led this season by Gerlufsen while coach Eran Ganot is out on medical leave. Ganot stepped away before the season opener.

Hawaii: It was Hawaii's first game against a ranked opponent in two years. ... The Rainbow Warriors play their next five games at home. ... While Hawaii had that winning streak against the Ducks, the two sides hadn't met since 1999.

Oregon: Oregon says Juiston is week-to-week. ... The Ducks have played the most difficult schedule in the nation thus far this season, with four opponents in the top 15. ... Portland Trail Blazer Nassir Little was at the game and stayed afterward to shoot a bit on the court at Matthew Knight Arena.

FAB FROSH: Walker, a 6-foot-8 power forward from Florida who was considered a five-star recruit, emerged during the tournament in the Bahamas.

“I thought his activity was pretty good. He can improve his rotations on the ball screens, but he's pretty bouncy around the basket and had some nice finishes," Altman said.

Walker said he knew he was going to have to step up with Juiston out.

Oregon: The Ducks play at Michigan on Saturday.