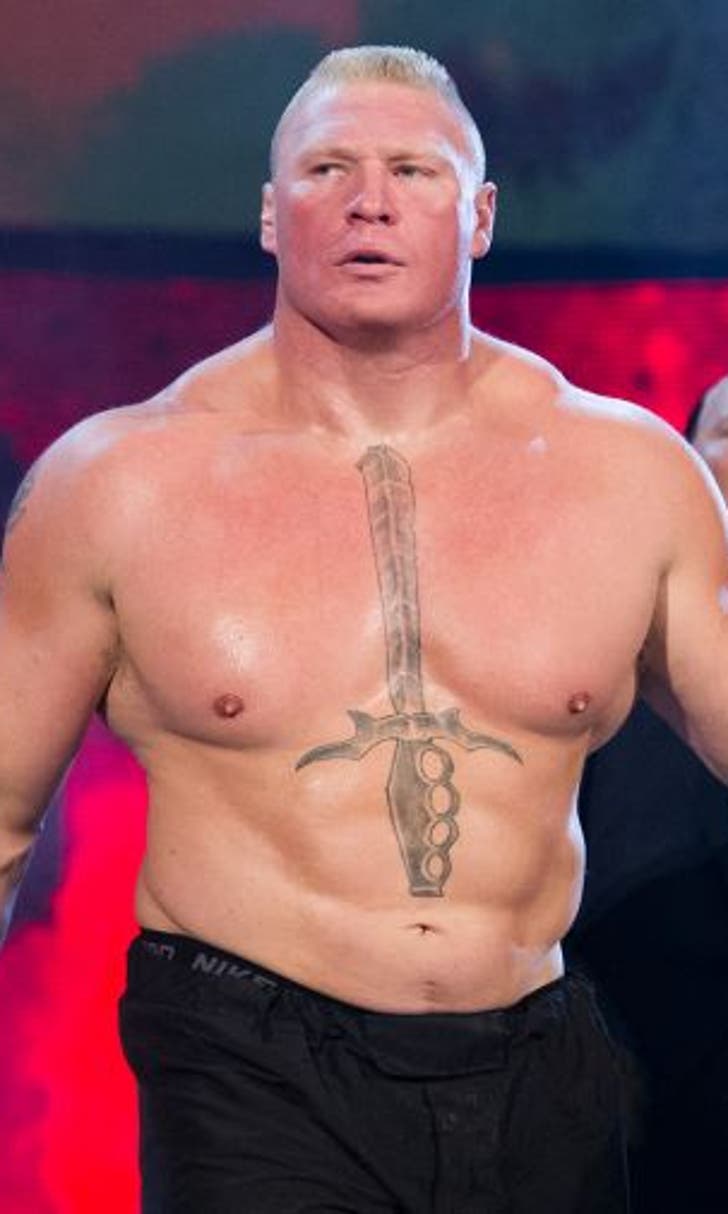 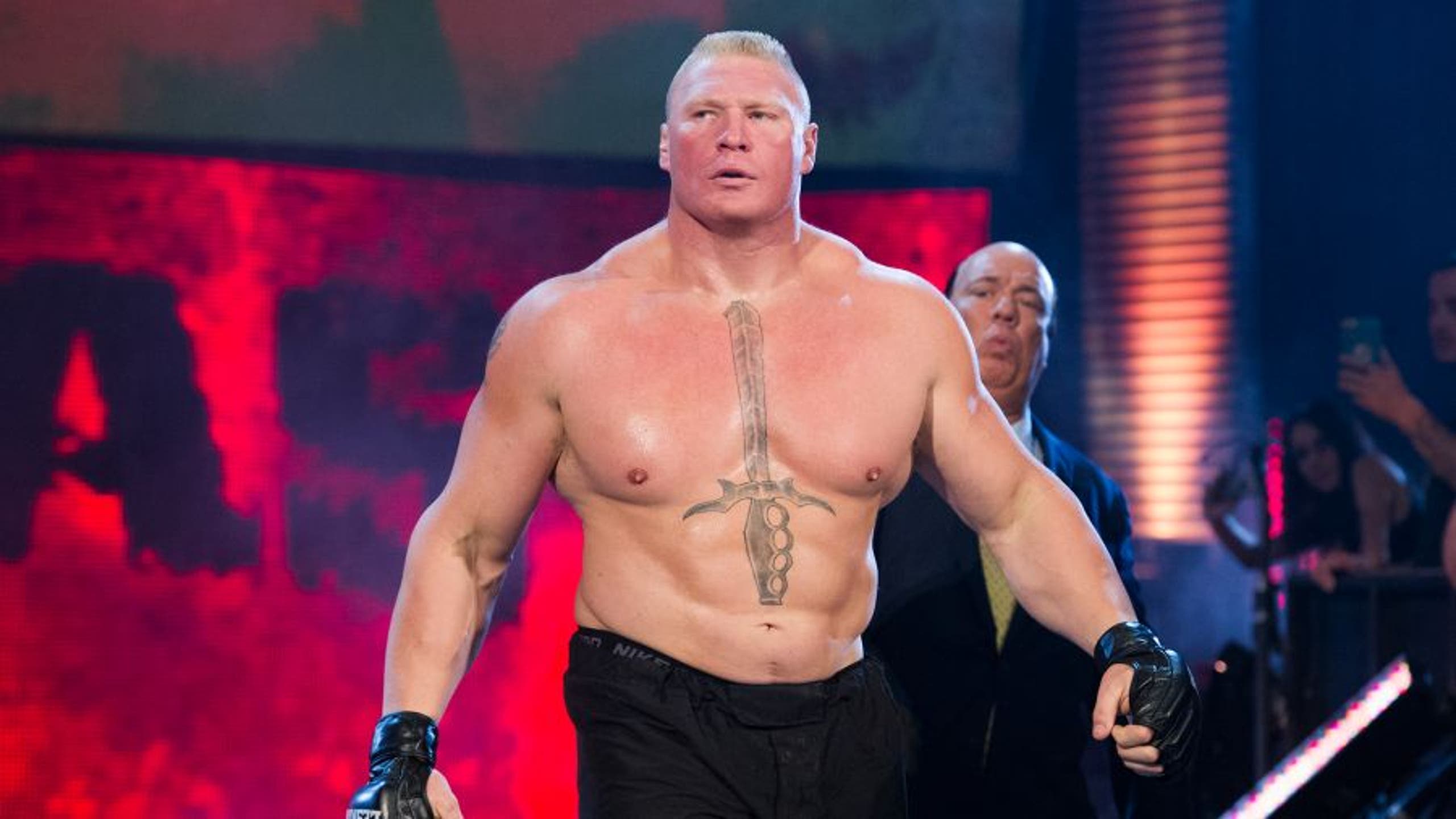 BY Fansided and Alexander Podgorski/FanSided via Daily DDT • June 30, 2017
share

Brock Lesnar is always a top candidate to win any of his matches in WWE. But this time, he absolutely should not win the Royal Rumble.The Royal Rumble is fast approaching, and many people have already announced their participation in the eponymous match. The Rumble match will strike as fine balance between younger talent itching to make their mark, veterans looking for another chance at glory, and surprise entrants that’ll show up…just because.One man that everyone’s going to be watching out for in the match is Brock Lesnar. The self-proclaimed Beast Incarnate’s main focus in that match will be to demolish one Bill Goldberg, who humiliated him at Survivor Series. The main purpose of Lesnar’s appearance in this match is to further the feud between these two men for their planned confrontation at WrestleMania.But what if Vince secretly has other plans? What if, in the past few weeks, he had one of those crazy nightmares after which he woke up panting and covered in sweat, and had another crazy idea that he thinks the fans will love?What if, Vince has decided that Lesnar should be the one to win the Royal Rumble? It might seem absurd to think Vince would come up with such an idea, but keep in mind, this is the same man that thought everyone wanted to see Randy Orton and Batista main event WrestleMania XXX. He’s well-known for making last minute decisions (often times without much justification other than ‘they’ll never see it coming, LOL’), and this could very well be one of those moments.Related Story: WWE WrestleMania 33: Match Card Projections 3.0If he’s thinking that way, Lesnar winning the Rumble match is actually a very bad idea. Here’s why…Next: No. 5 WWE.com

5. He Has Main-Evented Against Roman Reigns Before

No offense to Kevin Owens, but this is Vince McMahon we’re talking about. If he had to choose between Reigns and Owens at WrestleMania, there’s no doubt he’d choose Reigns, simply because of his stubbornness and insistence on having his initial plans seen through, no matter how much backlash they receive.

So again, if Lesnar were to win the Rumble, he’d be facing Roman Reigns in the WrestleMania main event. Remember how well that match went the first time? Yes, it was a good match, but the majority of the audience rejected Reigns en masse. Reigns was booed heavily in the match, and it was only thanks to Seth Rollins’ surprise MITB cash-in that a catastrophe was avoided so narrowly.

So if WWE were to make Lesnar/Reigns as the ‘Mania main event again, things would be even worse for Reigns than they were at WrestleMania 32. Lesnar, no matter how little he cares about pro wrestling in general, will always be cheered more than Reigns. He’s an unstoppable badass that doesn’t take anything from anyone, and the audience still loves him.

Pitting him against Reigns at WrestleMania would simply be career suicide for Reigns, as he’d get an even worse reaction than his last main event.

Lesnar’s most recent WrestleMania match was supposed to be a main-event caliber match. It was a No Holds Barred match between Lesnar and Dean Ambrose, who was being presented as a Cactus Jack-like lunatic that was unafraid of any punishment. In the lead-up to WrestleMania, Ambrose wasn’t afraid of Lesnar and goaded the Beast into several compromising situations. There was hope that these two would steal the show on a card that was already looking gloomy based on its main event.

Sadly, the match disappointed big time. The match felt incredibly one-sided, with Lesnar hitting over a dozen German Suplexes on Ambrose. Dean, meanwhile, barely got any offense in, and looked incredibly weak throughout the match. What was supposed to be a critical match for Dean Ambrose ended up being a spectacularly underwhelming match.

If that was how he performed in a lower main-event match, one cannot help but wonder how Lesnar would perform again in the main event. He’d have to work with a spectacular ring general or masterful storyteller in order to have a great match. And given how badly last year’s main event went down, a great match is what WWE MUST put on to close the show this year.

3. There Are Plenty of Better Candidates for Winner on the Roster

WWE’s current roster is stacked with talented individuals. Many of these stars are potential main-eventers, if only WWE’s dubious booking would give them a chance. That won’t happen if WWE goes down a ‘safer’ route and books an ‘established’ star like Lesnar to win the Rumble.

The problem with this mentality is that it perpetuates the notion that today’s stars cannot get over on their own. By constantly emphasizing stars from the past, WWE enforces the notion that they need to rely on people who big draws previously, instead of giving the current stars a chance to main event WrestleMania.

In truth, Lesnar doesn’t need to win the Rumble, nor does he need another shot at any championship. That spot is better served going to someone that’ll be a part of WWE’s long-term future, which isn’t likely to include Lesnar on any full-time basis.

2. The Feud with Goldberg

This might seem like an obvious point, but it does need repeating. While WWE does like to swerve its audience from time to time, on this occasion it wouldn’t make sense. They’ve already put considerable time and effort into building up the Lesnar/Goldberg confrontation. For them to all of a sudden change their plans and book Lesnar to win the Rumble match would be asinine.

But keep in mind, this is the same company that didn’t have a final decision on the women’s Hell in a Cell match until the night before the event. It’s run by the same man that didn’t decide on a finish for Lesnar/Undertaker until only a few hours before the event. If the company’s key creative decision-maker is so undecisive about critical decisions, then it wouldn’t be all that surprising if he suddenly decided to make a major change in plans.

And if he were to do so and book Lesnar to win, then the WrestleMania line-up would be drastically different. This is one time when, no matter how big the impulse to swerve the audience might be, they should stick to their original plan.

1. We Don’t Need to See Another Repeat Winner

The entire point of the Royal Rumble is to set up the main event for WrestleMania. To that end, the Rumble has traditionally been used to give major credibility to a rising star. That is, except for when a previous winner wins for a second time.

Three of the past five winners of the Royal Rumble match, John Cena, Batista and Triple H, had all won beforehand. Worse, unlike other multi-time winners in Hogan, Michaels and Austin, each of these three men had a large gap between wins. Cena’s gap was the smallest at five years, while Triple H had gone a staggering 14 years between Rumble wins.

This is a major reason why Lesnar should not win the Rumble. If he were to win, he’d be doing the exact same thing HHH did: win the Rumble 14 years after he won it the first time. It would also send a very clear message to both the audience and the roster: that wrestlers that became big stars years ago still deserve to be in all the big spots at WrestleMania.

The Rumble’s supposed to be the launching pad for a younger star’s rise to the top. It should rarely, if ever, be used as a checklist of accomplishments for someone that has already done it all.