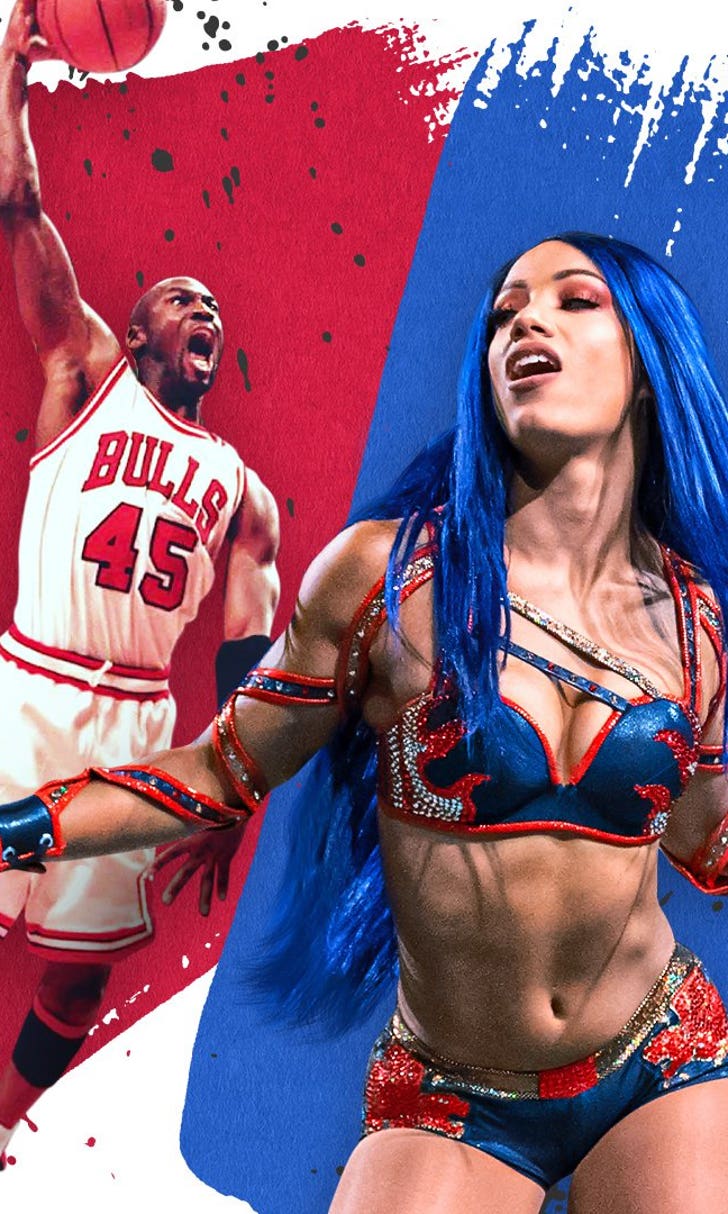 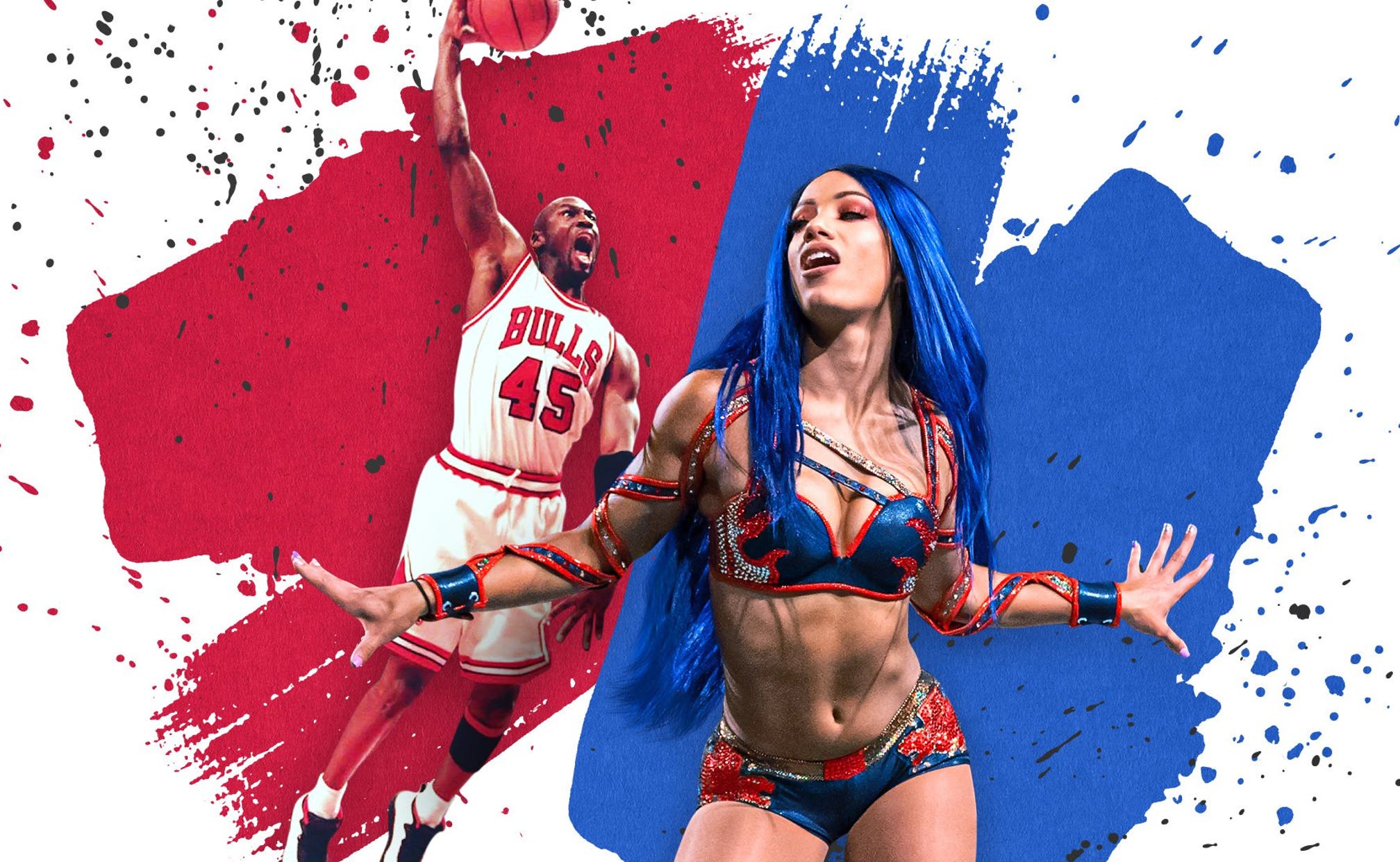 Why Sasha Banks is the ’95 Michael Jordan of WWE

If I’m being honest, I kind of just stumbled upon the comparison. Even for me, equating present-day Sasha Banks to Michael Jordan in 1995 isn’t an analogy that I just blink and whip up in 15 seconds flat. I’m also keenly aware that only two sentences into this, you’re all decently skeptical that this will make any sense whatsoever.

But it will. Because it’s true. Sasha Banks right now, today, is on the exact path that Michael Jordan was in 1995 — and it’s why’s she’s going to walk out of WrestleMania 36 with a Women’s Title on her shoulder.

Some quick background for the uninitiated — but first, some even quicker exposition. For those concerned, this article isn't going to be several thousand words on Michael Jordan’s 1995 stat lines or an elaborate, in-depth, Xs and Os-fueled deep-dive on how Phil Jackson and the Chicago Bulls’ triangle offense correlates to Sasha’s application of the Bank Statement (although that article sounds neat, too). Don’t get it twisted upfront; we’re focusing on Sasha Banks and the boatload of reasons why I believe she is on the precipice of a run the likes of which the WWE Women’s division has never seen before. Michael Jordan’s 1995 season (and the years that followed, more on that later) is simply the vessel that will help get us there.

Michael Jordan retired from basketball — for the first time — in 1993, after winning three straight NBA Championships with the Chicago Bulls. By that point, he was already being heralded in some circles as the greatest basketball player who ever lived. Following some brief time off and a highly scrutinized stint as a minor league baseball player, Jordan announced “I’m back” on March 18, 1995, in the most mid-‘90s way possible — via fax machine. MJ would come back with a new look, a slightly altered demeanor, a ton to prove to himself and ample adversity to overcome.

But before I start making the correlations that will tie all of this together in a way that is bound to knock both your socks and Jordan 11s off, I must deliver one simple, but definitive, statement, otherwise none of what follows will either hit as hard or make sense.

If you’ve watched me on WWE’s The Bump then you probably already know this, but it is my firm, unwavering belief that Sasha Banks is the absolute best sports-entertainer alive today. You, much like Evan T. Mack, can debate me on this, and honestly, I’ll gladly welcome that because I get that it’s debatable. However, for me, what is not debatable is that Michael Jordan is the best. Ever. Everything else, including Sasha (for now), can be up for debate, but Jordan being the G.O.A.T. is not. He’s earned it.

If Jordan had stayed retired in ’93, his legacy would’ve been that he was one of the greatest ever, but so much more discussion would’ve carried over to “what could have been.” His comeback in ’95, and everything that followed, is what changed both that discussion and the trajectory of the sport overall.

And Sasha Banks is in that exact same spot right now, y’all.

Granted, Jordan’s leave of absence from the court and Banks’ from the ring following WrestleMania 35 last April operated on completely different spheres. Jordan was reeling from personal tragedy that made it tough for him to focus on anything professionally, while Sasha’s was primarily centered around professional issues that quickly consumed her personally. However, both would admit to being run down and lacking the motivation they needed to compete at the levels expected of them, both by others and themselves.

Going into WrestleMania last year, Sasha’s résumé already spoke for itself: four-time Raw Women’s Champion, former NXT Women’s Champion and the then-current, and inaugural, WWE Women’s Tag Team Champion alongside Bayley. If The Boss had hung it up for good after last year’s Show of Shows like many were (falsely) speculating she would, nobody would’ve blinked an eye at calling her one of the best in-ring talents the Women’s division had ever produced. But at only 27 years old and with so much wrestling still in front of her, the conversation, much like with Mike, would’ve been more about what she could’ve given us as opposed to what she already gave.

It’s interesting, but really not surprising, that both Jordan and Banks would each take such ominous and criticized sabbaticals in the prime of their primes. I say that because the train of thought that ultimately finished with me coming to this very specific comparison started with something much broader: Michael Jordan and Sasha Banks are just wired the same as athletes. They check all the boxes on my ideal list of competitors that I am most drawn to and fascinated by. That list is as follows:

Jordan was famous for making stuff up. He would twist and turn reporters’ words so that he could then convince himself he was being criticized and use that as fuel on the court. In so many ways, Banks is guilty of the exact same thing. She is constantly aware of what is being said about her, and whether it’s tweets, chants or anything in between, if someone isn’t believing in her, she’s going to flip that sentiment to find even more belief in herself.

This was never more on display for Jordan then during his second act in ’95 and has been what we’ve seen from Sasha on a weekly basis since her return to the company last August. These are athletes who want you to hate them; they feed off your skepticism. MJ knew it would drive people crazy when he made a free throw with his eyes closed. He would do it as much to feed off the backlash as anything else. And when Banks taunts Lacey Evans’ daughter and then​​​​​​ tweets out a picture of them posing together, it’s not just her looking to be controversial or wanting to get a rise out of you… it’s actively hoping for it.

Track their careers even casually and you’ll quickly see that both are forcefully brash, incredibly passionate and have deep belief in the importance of symbolism. Naturally then, each made a drastic shift in their appearance upon their returns — Mike with the 45, Sasha with the blue hair.

No athlete had ever been more synonymous with his uniform number than Jordan was with his original number, 23. One poll shows that Jordan and 23 were more closely associated in the mid-‘90s than socially awkward kids and POGS.

To that end, Banks’ purple hair was a staple, not just of hers but of WWE as well. In a landscape where we’ve seen everything from Golden Goddesses to Red Queens, The Boss had truly cornered the market on a color. The purple hair made her instantly identifiable with all corners of the WWE Universe. You were just as likely to see a grown man in a Sasha T-shirt with purple trim as you were to see a child with a purple wig. The hair and the color itself were distinctly hers, and what she sported through every single significant triumph of her career.

But even with all that marketability and history, she, like Jordan, consciously changed it up upon coming back, each wanting to clearly distinguish the return from what we’d always seen before. Symbolically, it was time to start fresh.

MJ switched to number 45 (the number he wore during his baseball stint), paying immediate dividends for the Bulls on the court, dropping 55 points against the Knicks in Madison Square Garden in his fourth game back. The Boss dyed her hair blue, also making an instant impact, beating the living crud out of both Natalya and Becky Lynch on her very first night back on Raw. Both seemed more focused and, in Sasha’s case, far more ruthless, than we had ever seen previously.

The number 45 wouldn’t stick for Jordan, though. Midway through the 1995 NBA Playoffs, His Airness reverted to number 23. The “why” on that is important and I’ll get to it in a minute, but even more important to highlight is that Banks won’t be ditching the blue hair anytime soon. After adopting the new look, and the new attitude that’s gone with it, Sasha has started to refer to herself as The Blueprint, and it needs to be said that it’s more than just a clever marketing tie-in to the hair color.

This will be the one soapbox I get on this entire article, but Sasha Banks is the blueprint for the perfect sports-entertainer. She’s technically sound, but not afraid to go to the air. She can elaborately get in your head with theatrics, while simultaneously staying laser-focused on the task at hand. She looks to dominate every time she’s in the ring, but also is willing to put her body through absurd amounts of punishment if it’s not tilting her way on any given night. Not coincidentally, those are also all perfectly accurate descriptors for Jordan, and the primary reasons why you best believe that the blue hair, and The Blueprint, are here for the long game.

But, if you came into this with any type of working knowledge of Jordan’s 1995 season, then you’ve spent the first 1,671 words of this wondering why I would choose to compare Banks to MJ in the one season he played between 1991 and 1998 when he didn’t win a title.

And the answer is because of what he did after.

Yes, Jordan and the Bulls came just up short against the Orlando Magic in the Eastern Conference Semifinals in 1995. It’s during that series where Jordan reverted to number 23, but even that bit of reverse symbolism wasn’t enough to overcome Shaq, Penny and a young, surging Magic team. Jordan had taken 17 months off before trying to cram a full season of basketball into two months and it just wasn’t attainable in that moment.

But, y’all know what Jordan did after ’95, right? Yeah, the dude only won three straight NBA Titles from ’96 to ’98, set a new league record for most wins in a season, won his fourth MVP award, stopped an alien invasion alongside Tweety Bird on the silver screen and closed the loop on a legacy that would’ve been a little open ended had he dipped for good in ’93.

Which is why Sasha stans (shout-outs to The Krew) just need to stay patient.

Banks coming up just short against Lynch for the Raw Women’s Title this past fall and any minor hiccups she’s had against anyone else in the weeks and months since are her present-day version of the Orlando Magic. Sasha discussed in detail the massive overhaul she went through, both personally and professionally, during her time away in her episode of WWE Chronicle. For all intents and purposes, it was the biggest shift of her life. And, as even Jordan proved in '95, — who, remember, is inarguably the greatest of all-time — sometimes, it just takes some time.

And that’s exactly why I’m not going to hesitate to predict here, on WWE’s The Bump or anywhere else that Banks is going to win the Women’s Royal Rumble Match, leave WrestleMania with a Women’s Championship and then somehow top even those accomplishments over the next three years and beyond. Sasha is on the doorstep of something extraordinary, a greatness that is singular and attained by earning it every night. Right now, she’s Michael Jordan in 1995. But soon, very soon, she’ll just be Michael Jordan. Meaning, Sasha Banks is going to be the best. Ever.

And you won’t be able to argue it.