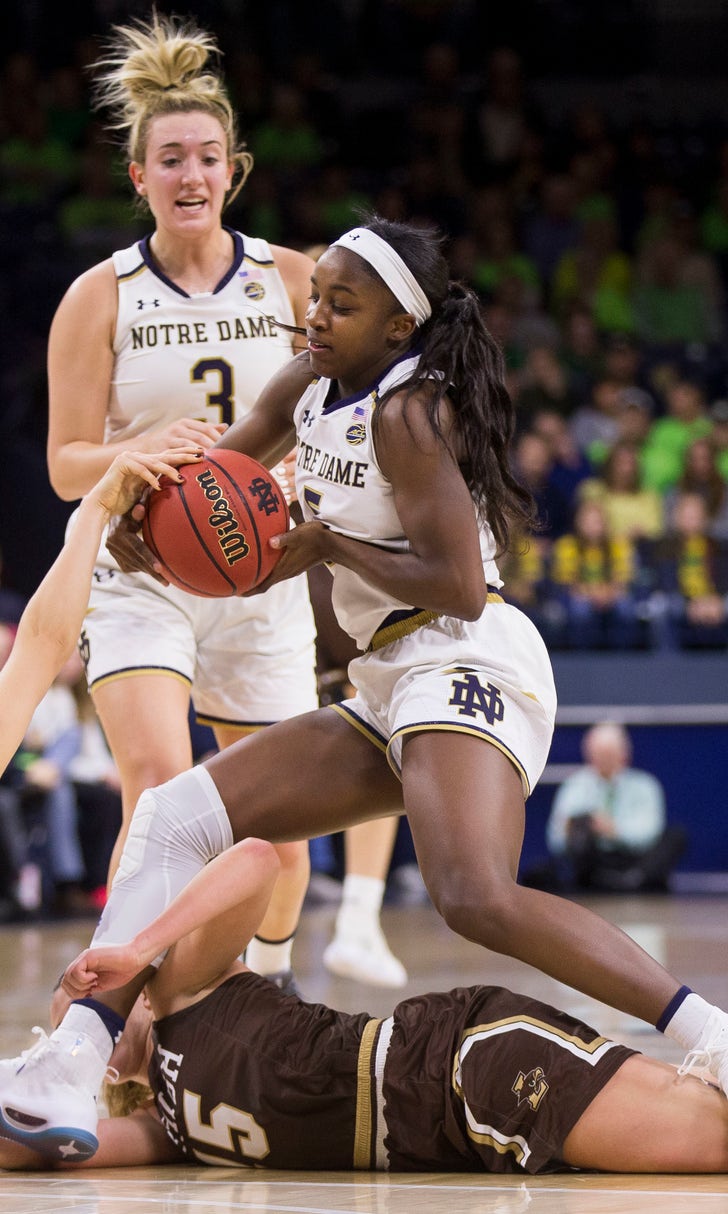 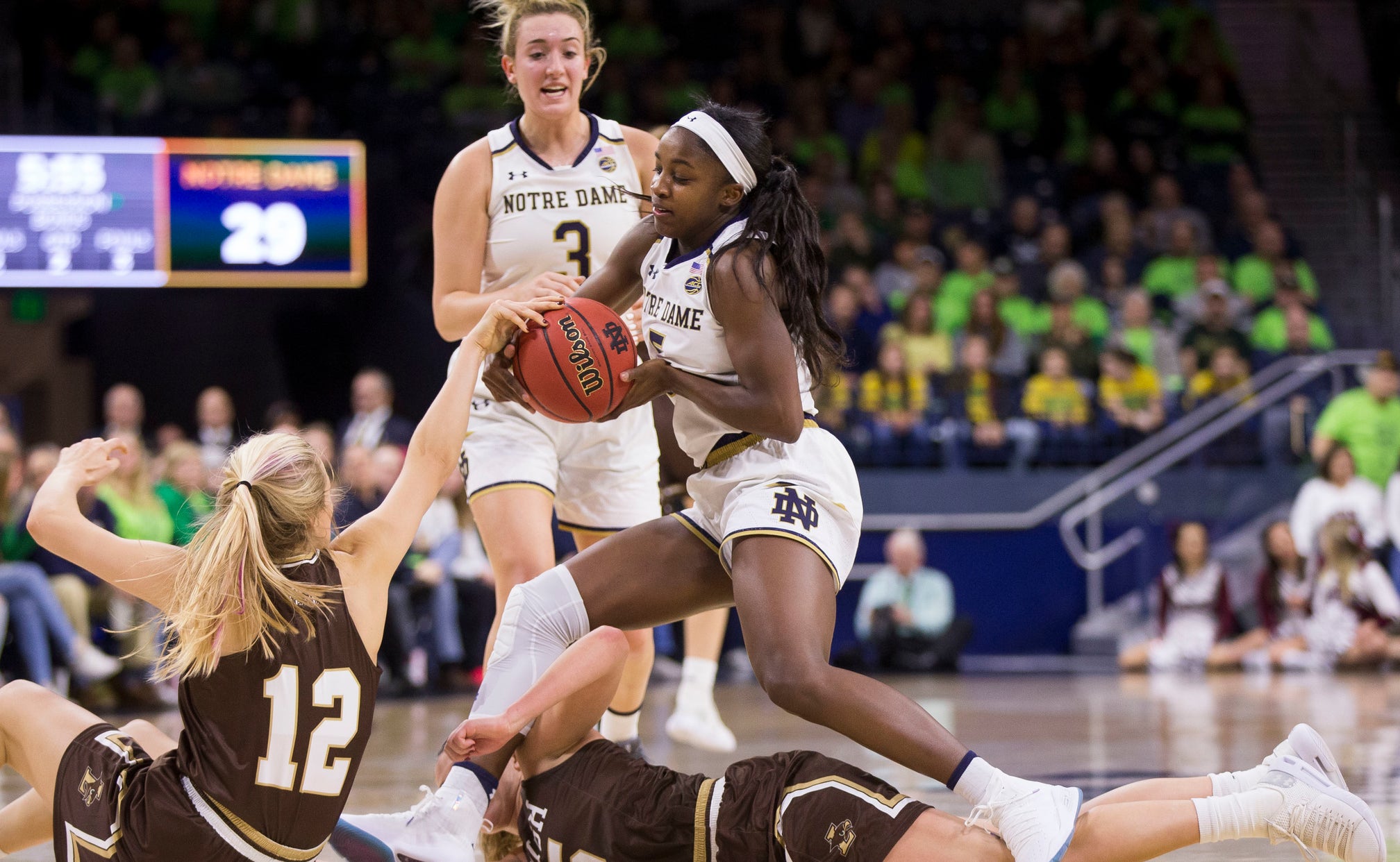 SOUTH BEND, Ind. (AP) — Muffet McGraw's last two coaching milestones have been fitting ones, to say the least. The latest, her 900th overall victory, came Sunday in No. 2 Notre Dame's 95-68 victory over Lehigh, where she got her head coaching start 37 seasons ago.

"Seems like a very long time ago being there," McGraw said after Arike Ogunbowale scored 23 points and Marina Mabrey added 19 to lead the five Irish starters in double figures for the Irish, who won their fifth straight. "It made it all the more special to have Lehigh here."

Her 800th victory came in the NCAA national championship game last April 1 when Ogunbowale hit a 3-pointer with 0.1 remaining to beat Mississippi State 61-58 in Columbus, Ohio.

"I'm really blessed to be able to be here for these moments," Ogunbowale said on a day when she moved into fourth place on the all-time Irish scoring list ahead of 2001 Naismith Women's Basketball Player of the Year Ruth Riley, who finished her career with 2,072 points. "It's been an honor to play under her, a Hall of Fame coach. Not many are able to do that."

The ninth Division I women's basketball coach to reach 900 victories, McGraw was recognized afterward with a video presentation from her husband and son that brought tears to her eyes. She then posed for pictures with both teams and many former players.

Brianna Turner scored 15 points, Jessica Shepard had 14 and Jackie Young added 10 for Notre Dame (12-1). The Fighting Irish shot 61 percent from the field and had 26 assists on their 35 baskets. Mabrey had seven assists, Shepard had six and the Irish won the board battle 37-29 with seven each from Turner and Shepard.

"I think I'm pretty sure I've been here for 800," joked Turner, who is playing a fifth year after missing last season because of an ACL injury, one of four McGraw and her staff had to overcome to win the second NCAA title. "She's such a pioneer, such a role model for us. She always encourages us to be the best we can be."

"It's a game I'm okay with losing," said Troyan, who has been mentored by McGraw during her 24 years as head coach and has former Irish player Ariel Braker on her staff. "It's an honor to be out there and see what she meant to Notre Dame and to women's basketball."

"I grew up watching Notre Dame games," Buhr said. "It was awesome being here today."

The Mountain Hawks fought back from a seven-point deficit in the opening quarter to trail by one, 20-19, after Hannah Hedstrom made three free throws. Hedstrom was fouled by Danielle Patterson while attempting a desperation buzzer-beater.

Lehigh then took a 21-20 lead on Grundhoffer's basket to open the second quarter. But Ogunbowale made three free throws after being fouled on a 3-point attempt by Buhr, and the Irish never trailed again. Notre Dame finished the half on a 21-8 run thanks to 69.2 percent shooting (9 of 13) in the quarter, to lead 46-31 behind Ogunbowale's 14 points and 10 by Mabrey, her roommate.

Lehigh: The Mountain Hawks could be a surprise in the Patriot League race. Picked to finish fourth with Navy behind favorite Bucknell, Lehigh hung tough with the Irish for the first 12 minutes before Notre Dame's shooting accuracy kicked in. After shooting 42.9 percent (6 of 14) in the first quarter, the Mountain Hawks finished at 35.5 percent for the half.

"We came in focused on what we had to do," Troyan said. "We made shots in the first two quarters, but I think they probably upped their defense in the third and fourth quarters. I thought we came out and competed hard. Their talent just took over."

Notre Dame: In their final tune-up before beginning Atlantic Coast Conference play, the Fighting Irish showed the effects of an eight-day layoff, committing 10 first-half turnovers and missing some easy shots underneath. But Notre Dame forced 12 Lehigh turnovers in the same span and held the Mountain Hawks to 35.5-percent shooting (11 of 31), including 29.4 percent (5 of 17) in the second quarter. Notre Dame had 11 assists on its 17 first-half baskets.

"I think we're sharing the ball well," McGraw said. "We had some rough patches defensively, but offensively we did some good things. Too many turnovers (Notre Dame had 17 but forced 20). I thought we got sloppy at times. But I'm trying to focus on the good things today."