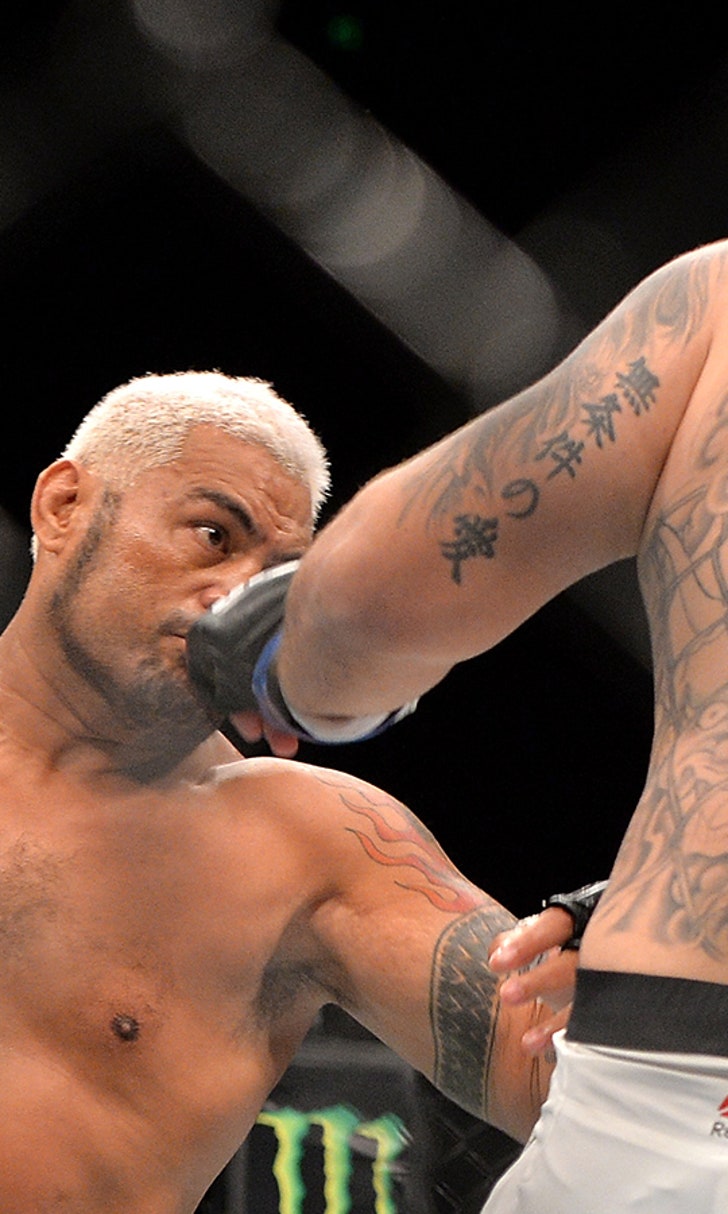 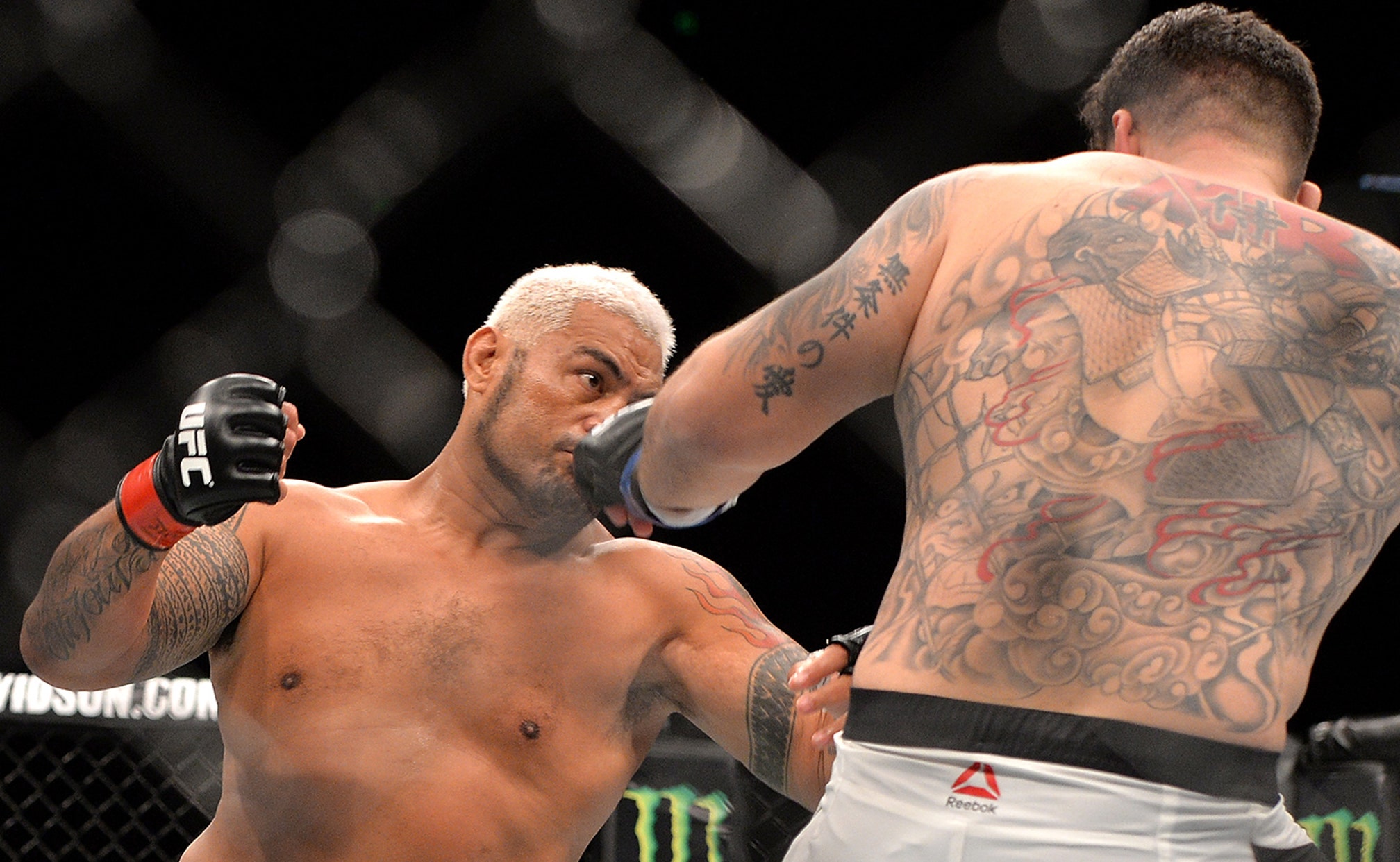 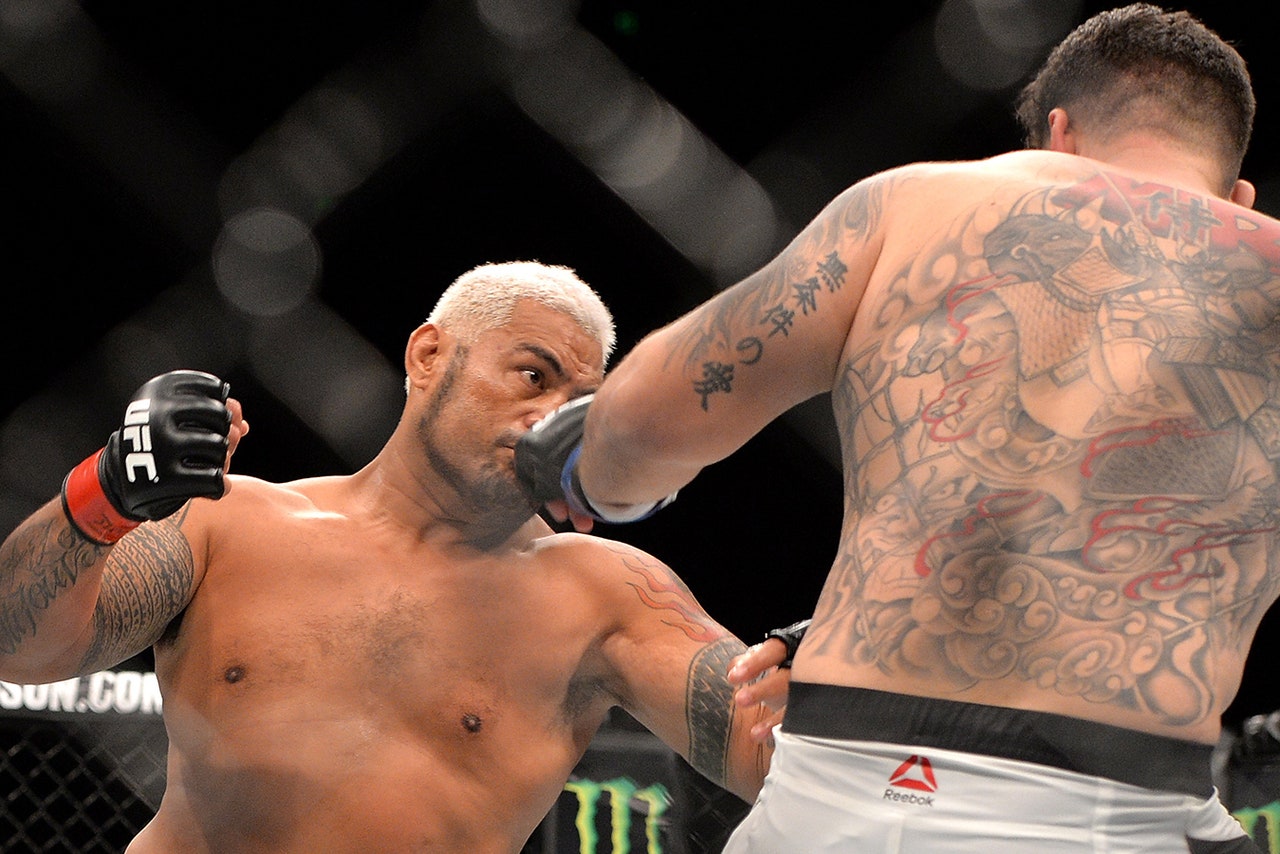 Mark Hunt put on another classic walk off knockout performance as he finished Frank Mir in the latest main event as the UFC traveled to Australia on Saturday night.

Hunt has landed more than his fair share of mind blowing knockouts over the years and his latest left Mir dazed, confused and staring at the lights inside the first round of their heavyweight matchup in Brisbane.

Also on the card, Neil Magny got arguably the biggest win of his career as he finished Hector Lombard with strikes in the third round after nearly being put away himself early in the first.

Magny has been a quiet contender for some time now but following this latest win, he's put the entire welterweight division on notice.

But we already know the results from the card in Australia so we're going to dig a little deeper to see what passed and what failed on Saturday night. This is Making the Grade for UFC Fight Night: Hunt vs. Mir. 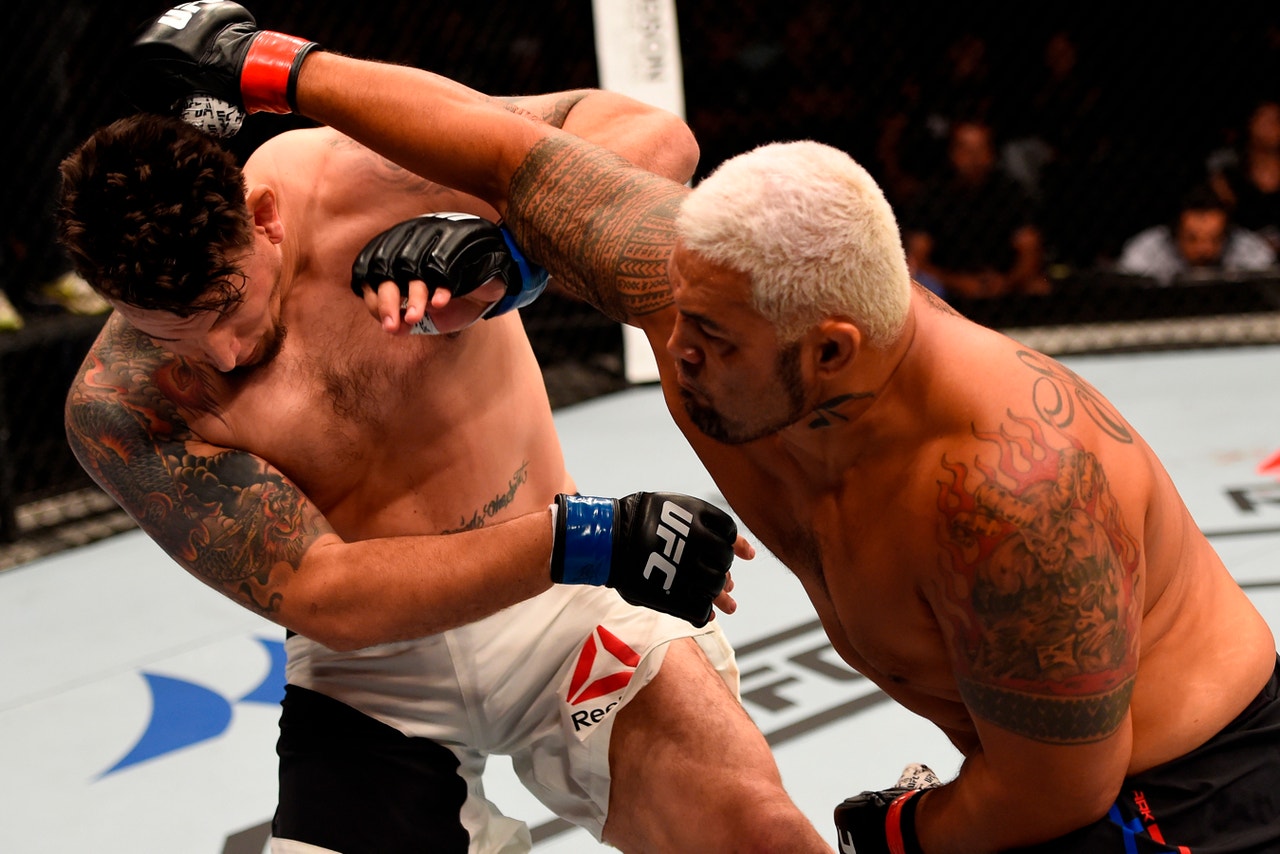 When the UFC acquired PRIDE Fighting Championships in Japan several years ago, they also got a roster of fighters and a slew of contracts that the promotion had to honor. Among them was a former K-1 champion named Mark Hunt, who had transitioned to mixed martial arts although without very much success during the early part of his career.

Rather than allow him to fight, UFC officials offered to pay Hunt off to get him out of contract.  He was an aging fighter who didn't seem to have much on the table at the time, but Hunt refused to accept the offer and instead asked to fight in the UFC.

Now six years later, Hunt has been a mainstay in the UFC with seven wins on his record including six knockout victories and his latest comes over former heavyweight champion Frank Mir.

Hunt has competed for a title himself and faced a laundry list of top heavyweights over the years.  It's crazy to think that if he took that pay off, Hunt could have retired or maybe fought someone else rather than the UFC.

Fast forward to 2016 and Hunt is legitimately a top 10 threat at heavyweight, he's won six post fight bonuses and he is now a huge fan favorite.  It's a testament to his work ethic and desire to fight that he turned down the easy money six years ago in favor of competing in the Octagon.

Now It's hard to imagine a UFC without Hunt. And he still has plenty of fight left in him.

Neil Magny just continues to surprise everybody by picking up wins over top 10 fighters, the latest of which came over Hector Lombard -- a competitor who had never been finished in more than 40 fights and nearly 12 years as a professional.

To add onto his own legend, Magny even endured an absolute drubbing in the first round after Lombard dropped him and nearly finished him before the former "Ultimate Fighter" competitor battled back in rounds two and three.

When talking about the best fighters in the world at 170 pounds it's easy to mention names like Robbie Lawler, Rory MacDonald and Carlos Condit. But with a 10-1 record over his last 11 fights including three wins in a row, Magny should join that list as well.

He might be underrated but that doesn't mean Magny isn't one of the most dangerous fighters in the world at 170 pounds and this latest win should earn him a shot at a top five opponent with title contention lurking just around the corner.

A huge amount of credit lands on Daniel Kelly's doorstep once again because the aging former Olympian is somehow the butt of jokes leading into his fights, but he keeps on surprising people with his performances.

Kelly definitely looks the part of a fighter past his prime with a graying five o'clock shadow and less than chiseled physique, but his results inside the Octagon can't be denied.

He walked into his fight with Antonio Carlos Junior as a massive underdog -- five to one according to some odds makers -- and yet Kelly survived an early onslaught from the Brazilian before bouncing back to get a third round TKO. Kelly is now 4-1 in the UFC but chances are he's going to be a massive underdog in his next fight as well.

That's part of Kelly's charm because no matter how much you tell him he shouldn't win, he just finds a way to get it done.  There's definitely something admirable about that kind of spirit. 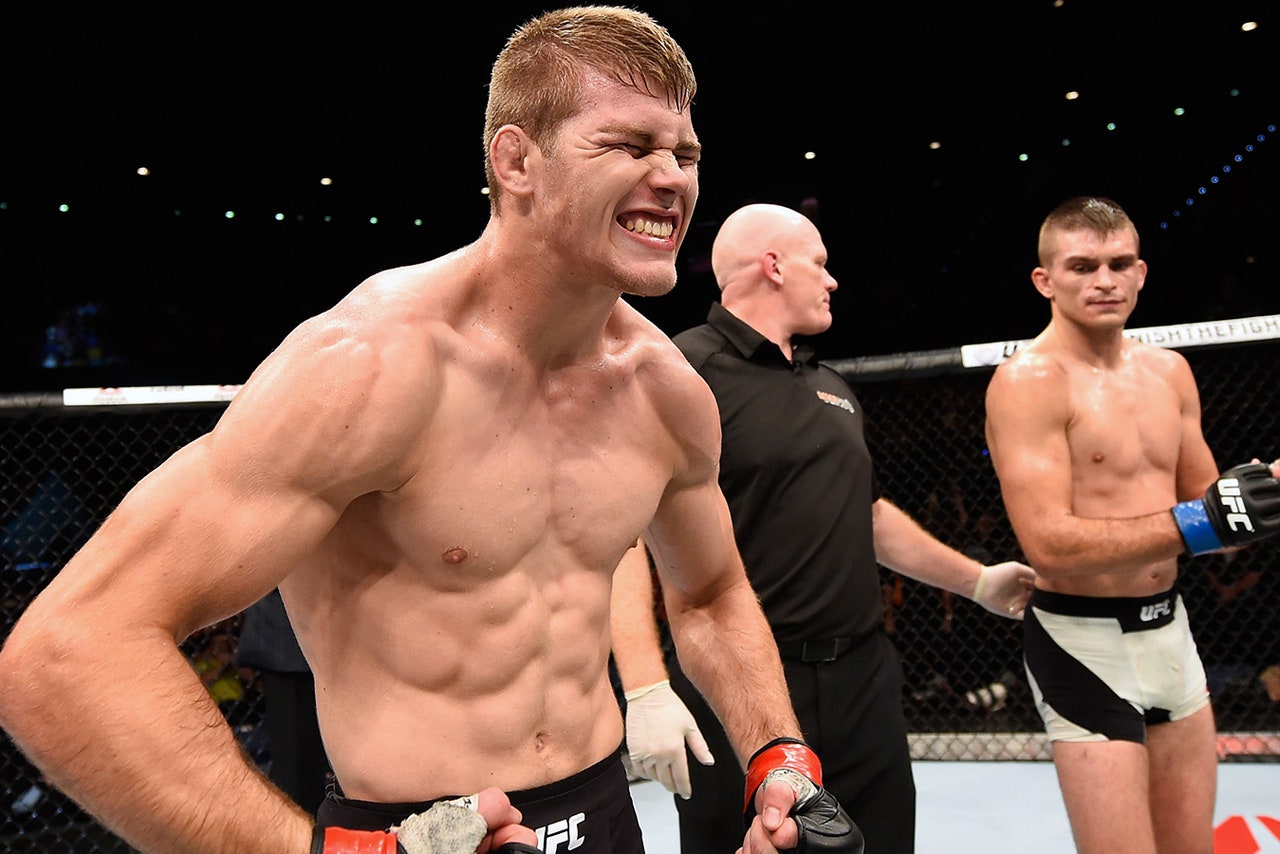 While the rest of the UFC world has been enamored with 19-year old phenom Sage Northcutt, it seems everybody should have been paying attention to Aussie teenager turned legitimate lightweight contender Jake Matthews.

Matthews started out his career as a 19-year old fighter as well after competing on "The Ultimate Fighter: Nations" but he never received the same amount of attention as Northcutt did with featured fights on some of the biggest cards of the year. Instead, Matthews mostly competed in his native Australia, which is probably good for him but maybe not for the overall success of his career.

Now Matthews is 21 years old with an impressive 4-1 record in the UFC with all four wins coming by way of knockout or TKO.  His latest win over Johnny Case was by far his biggest because Matthews took out a veteran fighter with more than double his experience and he looked like a beast from the start of the contest until the end.

Matthews is the youngster the UFC needs to get behind now because not only is he well spoken, but he might just be the most talented young fighter on the roster. None of this is Northcutt's fault obviously but it just looks like the UFC put a lot of eggs in one basket to promote him when Matthews might have been the better long term choice.

Here's hoping Matthews gets a marquee fight for his next matchup and the same kind of push Northcutt got when he first joined the roster last year.

When is Enough Truly Enough?

Referee Steve Percival got a ton of applause on Saturday night when he recognized that Neil Magny was hurt but not out in his fight against Hector Lombard after getting dropped early in round one. Lombard swarmed on Magny like a hurricane, but the Colorado based welterweight composed himself and continued to fight back even after eating a series of hard shots.

Magny was always moving and attempting to defend himself and Percival made a great call by giving him every chance to come back rather than pull the trigger on an early stoppage.

But all that good will faded just minutes later when Magny took over in the second round, put Lombard on the mat, mounted him and started to rain down heavy punches from above. Unlike Magny's defense from the first round, Lombard laid belly down on the ground, put his arms up over his head and essentially squirmed on the ground while eating a huge series of punches.

Rather than keep Lombard from taking any more damage, Percival inexplicably let the fight continue until the final horn sounded.  The third round started and Magny put Lombard back into almost the exact same position before blasting away with even more punches as Percival finally and mercifully called an end to the fight.

Referees have an impossibly tough job because 95-percent of what they do during a stoppage is a judgment call. Is a fighter hurt an unable to continue? Are they intelligently defending themselves? What's considered down but truly not out?

In this particular case, you have to wonder if both calls Percival made in the same fight don't actually fall into the same category really? Because Percival refused to stop the fight when Magny was getting pounded on in round one and he also allowed Lombard to get bludgeoned by more than 40 unanswered strikes at the close of round two.

There's a thin line between a good call and a bad call but there's one thing very clear after Saturday night -- Percival isn't stopping a fight until one competitor absolutely can no longer continue and that's not right and it's certainly not safe no matter who ends up celebrating when it's over.