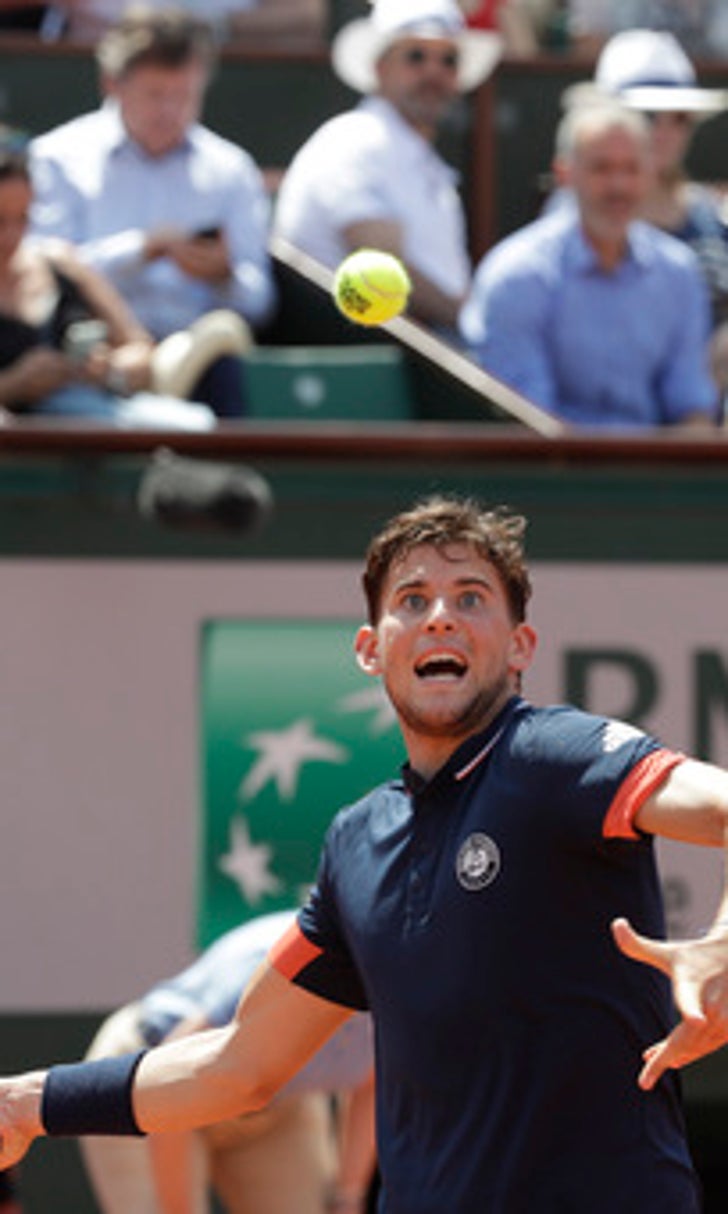 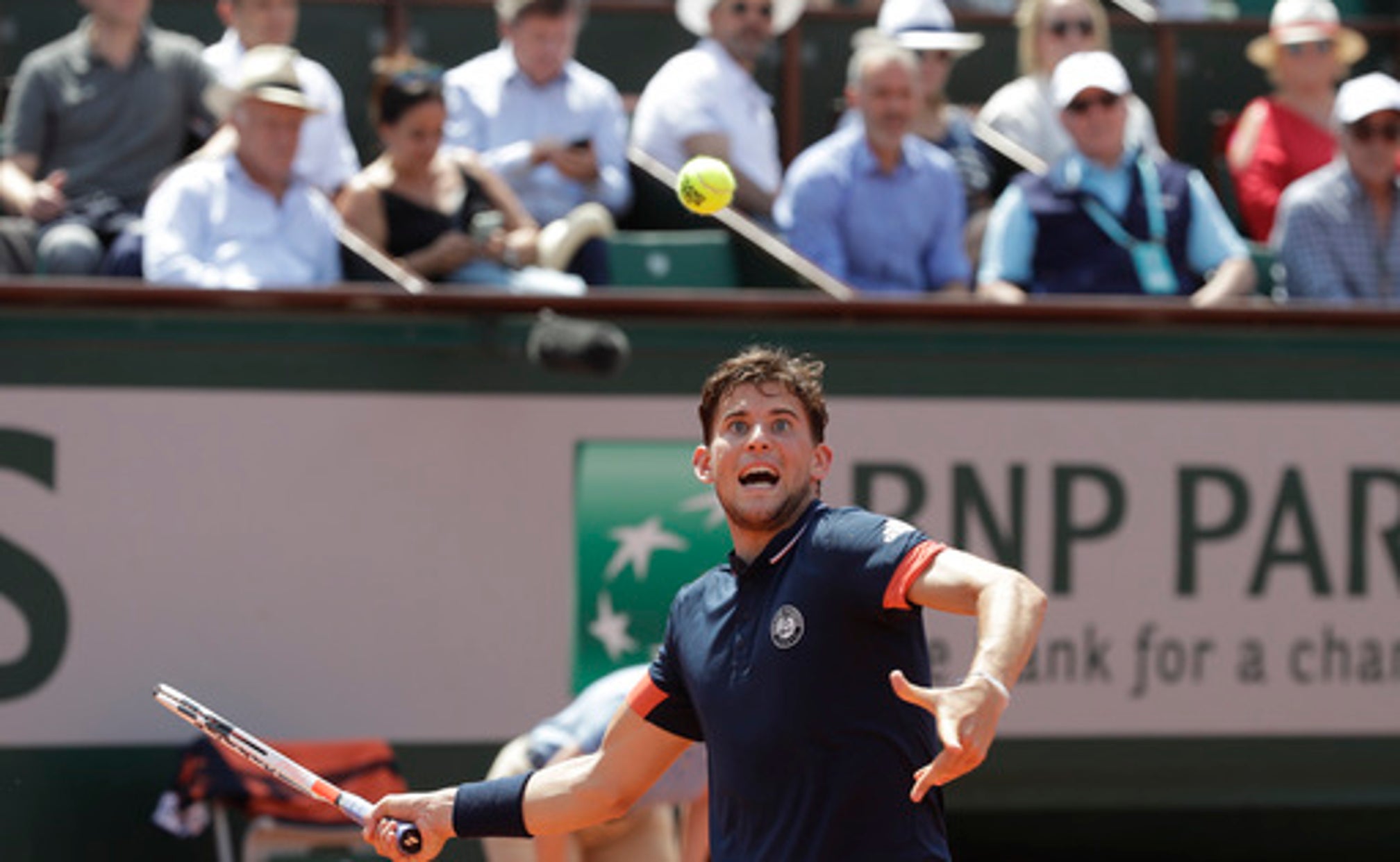 PARIS (AP) The Latest on the French Open (all times local):

Rafael Nadal lifted the French Open trophy for an 11th time Sunday - and this time without the guidance of Uncle Toni.

For Toni Nadal, who stopped coaching his nephew at the end of last season, the experience wasn't that different.

Nadal is now coached by former French Open champion Carlos Moya. That did not prevent his uncle from delivering some tactical advice ahead of the final.

''I told him he needed to hit the ball very high and try to come inside the court. Because if you stay behind the baseline against Dominic, he can take advantage of it,'' Toni Nadal said.

French Open runner-up Dominic Thiem says Rafael Nadal's feat of winning 11 titles at Roland Garros is one of the most awesome achievements in sports.

He said: ''What you did and what you're doing it's one of the most awesoming things that (an) athlete ever achieved in sports, to win this tournament 11 times. Congrats. It's amazing.''

It was a first Grand Slam final for the Austrian.

Rafael Nadal says he was ''very scared'' when he suffered cramp to his left hand in the third set of his French Open victory against Dominic Thiem.

Nadal, in an on-court interview, also said he's sure that runner-up Thiem will win the tournament in ''the next couple of years.''

Tears welled in the eyes of the now 11-time champion as he was applauded by the crowd.

Rafael Nadal has defeated Dominic Thiem 6-4, 6-3, 6-2 to win a record-extending 11th title at the French Open.

Nadal will remain at the top of the ATP rankings ahead of Roger Federer. Nadal and Federer have won the past six Grand Slam tournaments between them.

Rafael Nadal briefly interrupted the French Open final against Dominic Thiem in the third set with an apparent problem with his left wrist.

He was serving in the fourth game when he went back to his chair and unwrapped strapping on his left wrist.

A trainer was called and he briefly inspected Nadal's left wrist.

Nadal then served out that game.

After Thiem served, the trainer reappeared and massaged Nadal's forearm and wrist.

Play has since resumed and Nadal now leads 4-2 in the third set.

He broke the Austrian in the third game of the set.

Thiem saved a first breakpoint in that game but couldn't save the second, hitting a forehand wide.

Rafael Nadal is one set away from what would be a record-extending 11th French Open title, having taken the second set 6-3 in the final against Dominic Thiem.

Nadal had a brief moment of weakness in the first set, when the 24-year-old Austrian broke him in the third game. Since then, the Spaniard has been imperious.

He has not been broken since.

Rafael Nadal has consolidated his lead in the French Open final by breaking Dominic Thiem in the Austrian's first service game of the second set.

Thiem's serving and shot-making under pressure were among his principle weaknesses in losing the first set.

Rafael Nadal has taken the first set of his French Open final against Dominic Thiem.

Serving to stay in the match at 4-5, the Austrian allowed mistakes to creep into his game.

He hit a forehand long for 0-30 and then hit another forehand into the net to gift Nadal three set points.

Nadal then took the set 6-4 when Thiem hit a forehand long.

Since they exchanged breaks of serve in the second and third games, both have held serve, with Nadal now ahead 5-4, with Thiem serving next.

Thiem, 24, is showing no signs of nerves in his first Grand Slam final.

Nadal is looking as comfortable as ever on the Philippe Chatrier court where has previously won the title 10 times.

The crowd cheered when Zidane was shown on the big screen.

Rafael Nadal and Dominic Thiem have exchanged breaks of serve in a hard-fought start to the French Open final.

Nadal broke Thiem in his first service game to give the 10-time champion an early 2-0 lead in the first set.

But Thiem showed resilience in getting two break points on Nadal's serve. He converted the second to make the score 2-1.

Play has begun in the men's final of the French Open, with Rafael Nadal comfortably holding serve to love in the first game.

Pink Floyd frontman Roger Waters and James Bond actress Lea Seydoux have unveiled the Musketeers Cup that will be won by either Rafael Nadal or Dominic Thiem in the French Open final.

The trophy was carried into the Court Philippe Chatrier in a brown box during a brief ceremony before play begins and unveiled by the two stars of music and screen.

Barbora Krejcikova and Katerina Siniakova of the Czech Republic have won the French Open for their first Grand Slam title in women's doubles.

The No. 6-seeded pairing from the Czech Republic beat Eri Hozumi and Makoto Ninomiya of Japan 6-3, 6-3 on Sunday.

Krejcikova and Siniakova, who are both 22, were playing in their fifth major tournament together.

Siniakova was the doubles runner-up at last year's U.S. Open with a different partner.

The unseeded Hozumi and Ninomiya were the first all-Japanese duo to reach a Grand Slam final in women's doubles.

They knocked out the top-seeded pair of Timea Babos and Kristina Mladenovic in the quarterfinals.

Rafael Nadal bids for his record-extending 11th French Open championship when he faces Dominic Thiem in the final.

The top-seeded Nadal enters Sunday with a 10-0 record in title matches at Roland Garros and an overall career mark of 85-2 at the clay-court Grand Slam tournament.

The 32-year-old Spaniard is also vying for his 17th major trophy, which would move him within three of Roger Federer.

The No. 7-seeded Thiem, a 24-year-old from Austria, is appearing in his first Grand Slam final.

He is the only man to beat Nadal on clay over the past two seasons, doing so twice.

The forecast says there is a chance of rain.