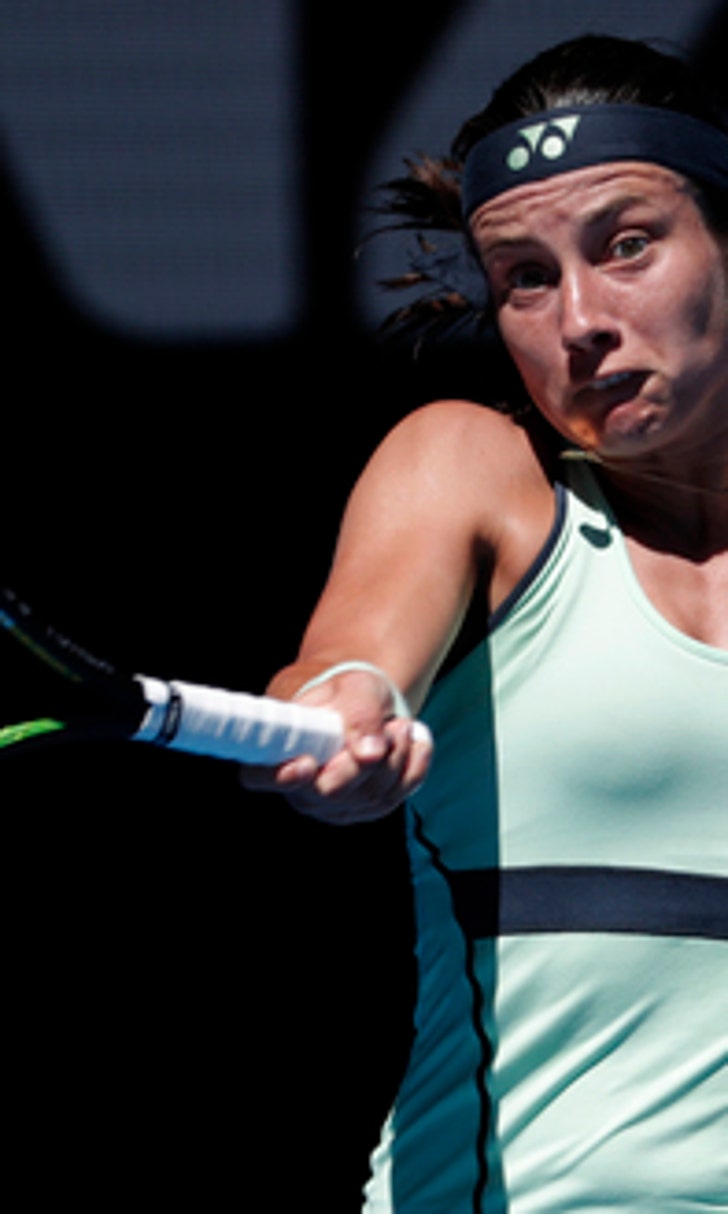 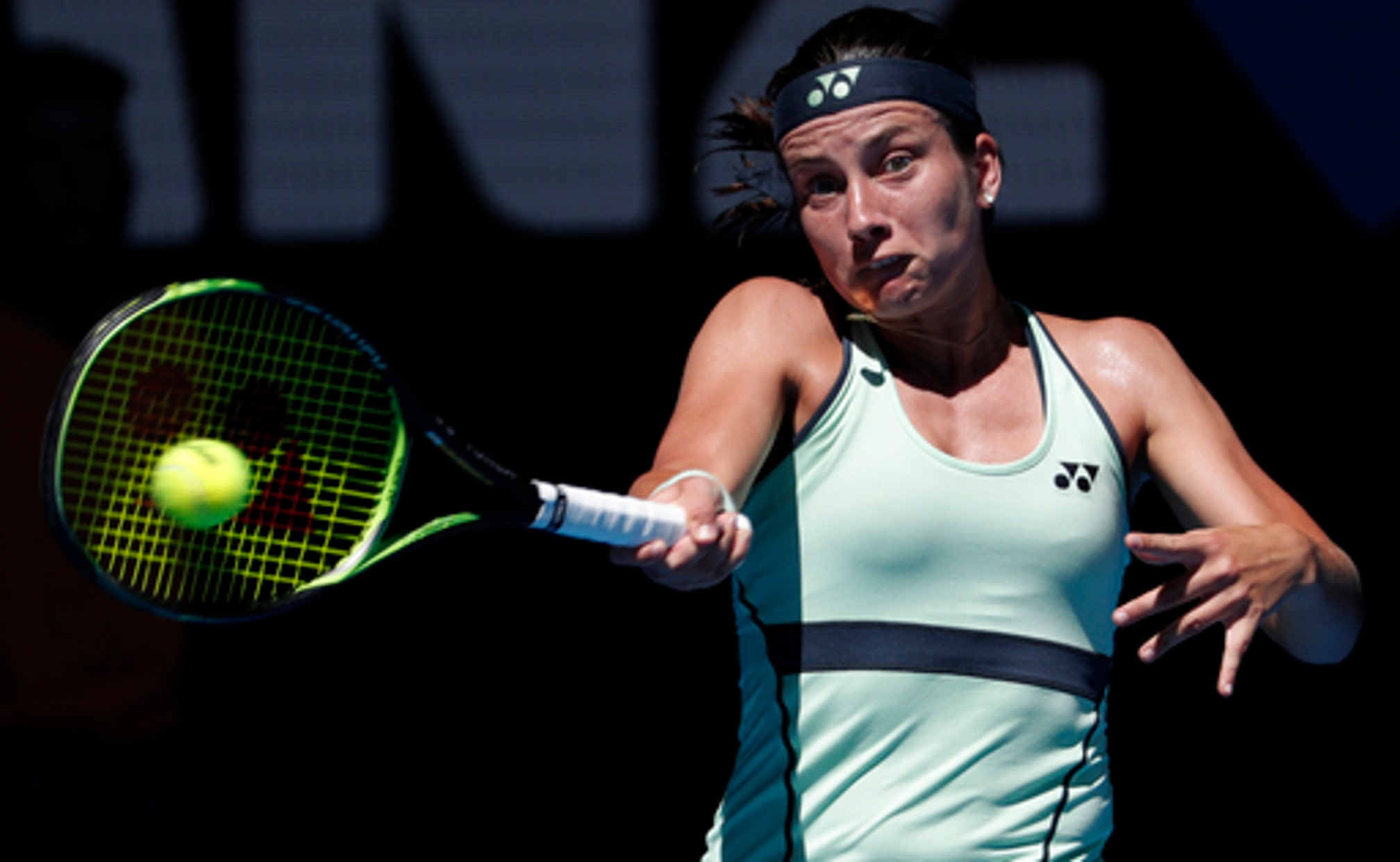 MELBOURNE, Australia (AP) The Latest on Thursday at the Australian Open (all times local):

Wild-card entry Julien Benneteau has had an upset 1-6, 7-6 (5), 6-1, 7-6 (4) victory over seventh-seeded David Goffin, winning the last five points in the tiebreaker in a third-round match.

It was only the second time in the now 59th-ranked Benneteau's career - in 19 attempts - that he's managed to beat a player in the top 10 in a Grand Slam singles match.

Monfils needed to be checked by a tournament doctor on Rod Laver Arena in the second set when the torrid conditions left him appearing woozy at times.

Madison Keys won the first 11 games and beat Ekaterina Alexandrova 6-0, 6-1 in a 41-minute third-round match at the Australian Open.

The 17th-seeded Keys was dominant serving in the first set. She served five aces in six attempts to open the match - four in the first game and another on the second point of her next service game.

She won every point on her serve in the first set, holding at love in three games.

Former champion Angelique Kerber celebrated her 30th birthday with a 6-4, 6-1 win over Donna Vekic to advance to the third round of the Australian Open and a match against Maria Sharapova.

It was Kerber's 11th win in a row to start the season.

Dominic Thiem has survived his first career five-set match at the Australian Open, rallying from two sets down to defeat 190th-ranked American qualifier Denis Kudla 6-7 (6), 3-6, 6-3, 6-2, 6-3 in the second round.

The fifth-seeded Austrian player improved his five-set record at Grand Slams to 3-3 with the win. He lost both five-setters he played last year at the majors to Tomas Berdych at Wimbledon and to Juan Martin del Potro at the U.S. Open.

Thiem counted 21 aces among his 57 winners in the match. He was broken three times in the opening set and once in the second set, then didn't face another break point for the rest of the match.

Wimbledon champion Garbine Muguruza is out of the Australian Open after being beaten 7-6 (1), 6-4 by Hsieh Su-wei of Taiwan in the second round.

Muguruza never looked comfortable in the match, double-faulting on break point in the second set and had 43 unforced errors.

She saved one match point in the ninth game on her serve before Hsieh served out the match in the next, clinching it with a winning backhand to the corner.

The Spaniard had a troubled preparation for the tournament, retiring with cramps in the second round at the Brisbane International and withdrew before her quarterfinal at Sydney because of a right thigh injury.

The 13th-seeded Querrey was one of 10 American players - men and women - to reach the second round from the 32 who started the main draws, the lowest number of Americans through to the second round in Melbourne since seven in 2011.

Former Australian Open semifinalist Johanna Konta has been knocked out of the tournament in the second round by American lucky loser Bernarda Pera 6-4, 7-5.

Pera, ranked No. 123, lost in the final round of qualifying and didn't get into the main draw until Monday, when Russia's Margarita Gasparyan withdrew with an injury. The 23-year-old Pera is making her Grand Slam debut.

Konta saved three match points in the ninth game of the second set, then broke Pera to level the set at 5-all. The American finally closed out the match on her fifth match point.

Pera was born in Croatia and moved to the U.S. when she was 16, deciding to represent the U.S. She is one of only four American women to reach the second round - the fewest number since 2011.

Konta ended last season on a four-match losing streak, including a first-round loss at the U.S. Open, while dealing with a foot injury. She then retired from a match at the season-opening Brisbane International with a hip injury.

Maria Sharapova has advanced to the third round, beating Anastasija Sevastova 6-1, 7-6 (4) as the temperatures began to rise at Melbourne Park.

With a forecast high of 39 Celsius (102 Fahrenheit), Sharapova appeared to be in a hurry to get off the Rod Laver Arena court, winning the first set in 23 minutes.

In the second set, Sharapova was broken while serving for the match, sending it to the tiebreaker which she dominated.

Sharapova is playing here for the first time since serving a 15-month doping ban for testing positive for meldonium at the 2016 Australian Open. She lost to Sevastova at the U.S. Open last September in her return to Grand Slam tennis.

Maria Sharapova was set to take on Anastasija Sevastova at the start of play Thursday on an expected day of scorching temperatures at the Australian Open.

The forecast was for temperatures approaching 40 degrees Celsius (104 Fahrenheit), and delays were likely on side courts if the tournament invokes its Extreme Heat Policy. Officials also have the option of closing the roofs on the three show courts, including Rod Laver Arena.

Sharapova is playing here for the first time since serving a 15-month doping ban after testing positive for meldonium at the 2016 Australian Open.