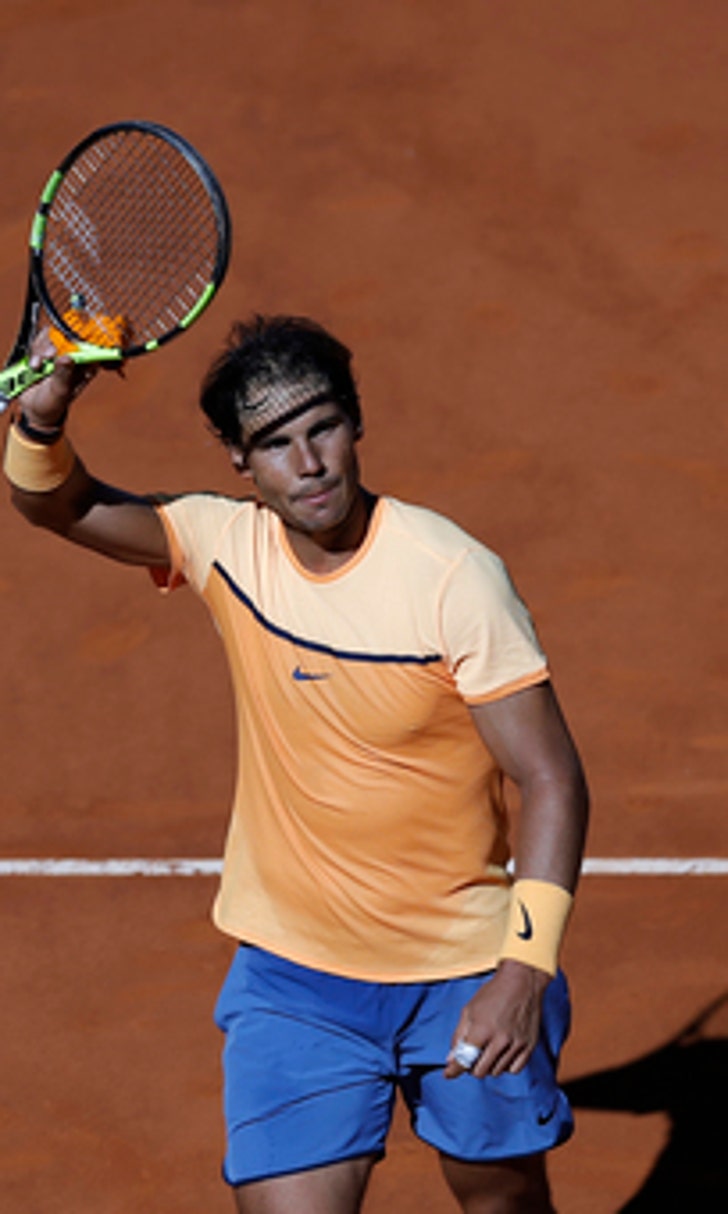 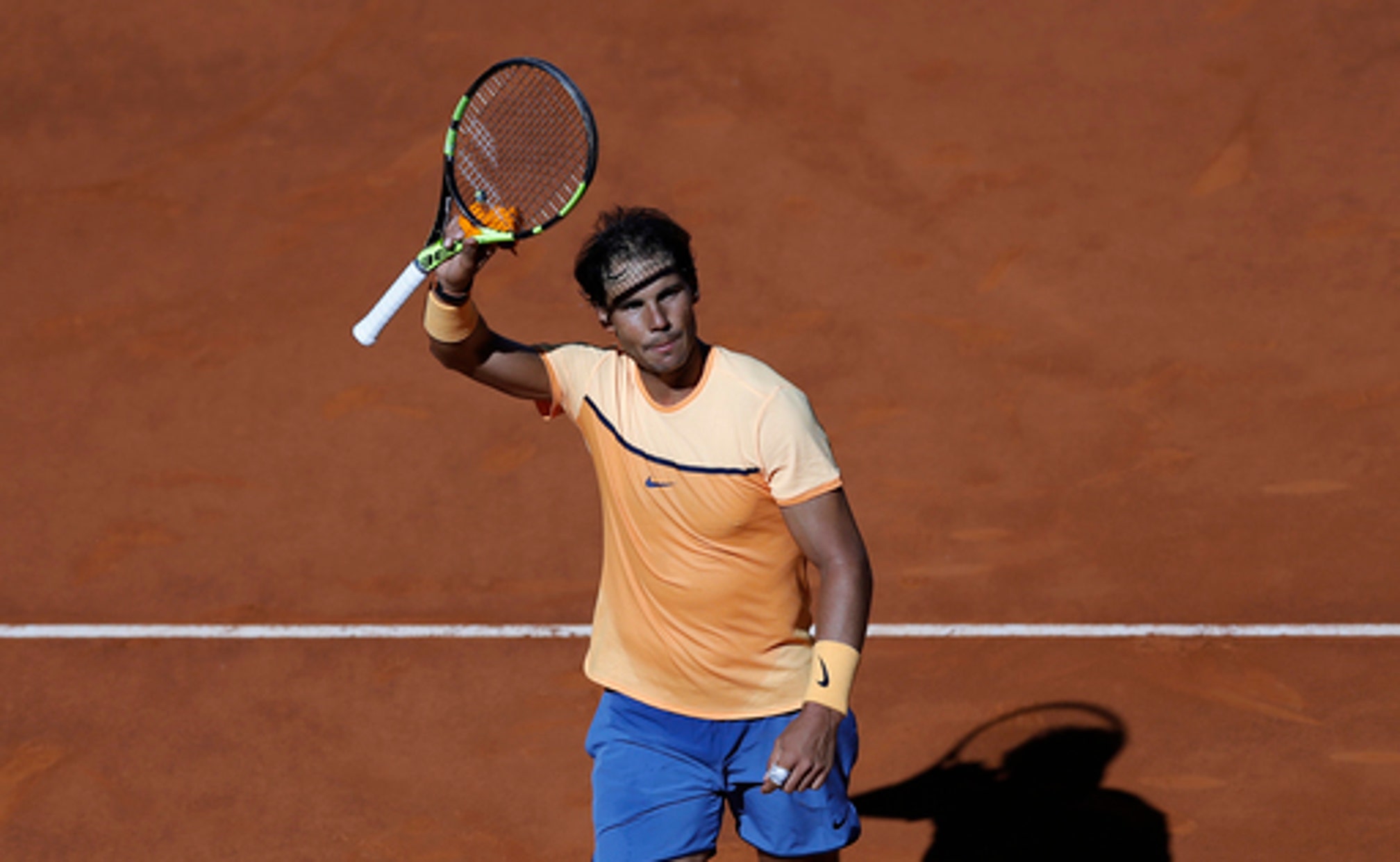 Nadal, Murray advance to 3rd round at Madrid Masters 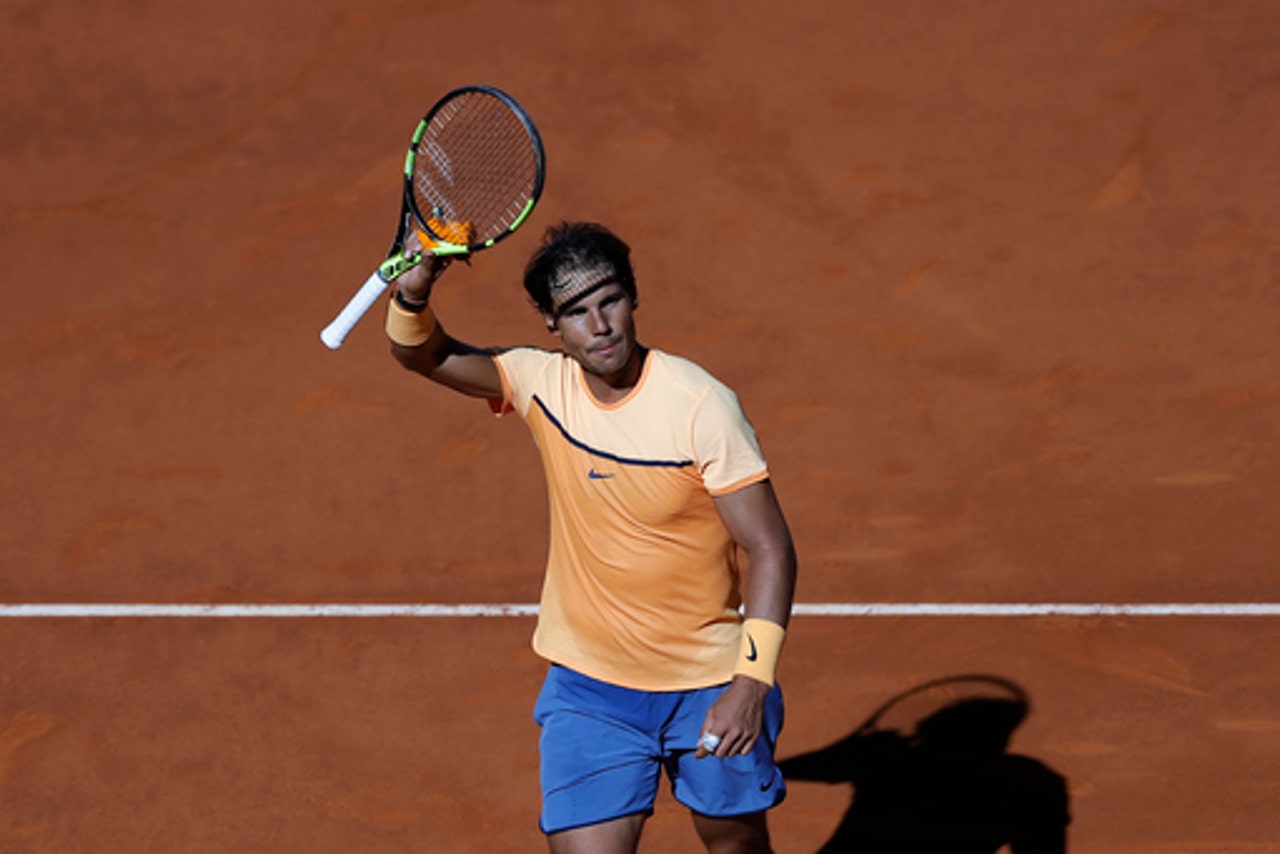 MADRID (AP) Rafael Nadal easily defeated Andrey Kuznetsov 6-3, 6-3 to reach the third round of the Madrid Masters on Tuesday, while Andy Murray advanced after a hard-fought 7-6, 3-6, 6-1 win over 37-year-old Radek Stepanek.

Nadal broke Kuznetsov's serve once in the first set and twice in the second to secure the win in his opening match at the clay-court tournament that he has won twice in the last three seasons.

The Spaniard had four aces and no double faults against the 39th-ranked Russian to win his 11th consecutive match this year in 1 hour, 18 minutes.

Nadal will next face either American Sam Querrey or Frenchman Lucas Pouille, who play their match on Wednesday.

Nadal hasn't lost since his opening match at the Miami Open in March. The former No. 1 is coming off consecutive titles at the Monte Carlo Masters and Barcelona Open.

Another win in Madrid this week would allow Nadal to match his total number of titles from last year, and boost his confidence even further heading into the French Open in three weeks. Nadal last won at Roland Garros in 2014.

After struggling last season, the fifth-ranked Spaniard is off to a good start in 2016 and has been playing at a high level again. He has reached at least the semifinals in six of the eight tournaments he has played this year, with the early eliminations coming at the Australian Open and in Miami.

''I'm happy with the way I started the clay-court season,'' Nadal said. ''Today, another victory, so that's great news. I'm excited about this tournament.''

Nadal dominated on Tuesday by serving extremely well. He needed only eight second serves the entire match, and lost only five points on his first. He hit 22 winners and had only nine unforced errors at the ''Magic Box'' center court in Madrid.

''My serve has been solid,'' Nadal said. ''I served well both in Monte Carlo and in Barcelona. And it's going to be vital to serve well here as well to have a good tournament.''

Nadal reached his 40th win at his home Masters. He has won the tournament four times, including in 2013 and 2014, but lost last year's final to Murray.

The second-ranked Murray had to battle hard to get past former No. 8 Stepanek, who on Monday became the oldest player to win a match at a Masters 1000 tournament since Jimmy Connors in 1992.

Murray was broken early in both sets, but came back strongly in the third to close out the match and secure a spot in the next round. He had 11 aces overall, including four in the decisive set.

''He played very well, it was not easy,'' Murray said. ''He was hitting the ball big up the lines. There was nothing I could do.''

In other matches Tuesday, former No. 4 in the world Juan Martin del Potro - currently ranked 274th after a series on injuries - had an emotional 7-6 (5), 6-3 win over 14th-seeded Dominic Thiem.

Del Potro hit 10 aces to reach the second round against American Jack Sock, who rallied to defeat Benoit Paire of France 2-6, 6-2, 7-6 (5) in nearly two hours.

''I have just played my best match since I came back to tennis after my surgeries,'' Del Potro said. ''I've had a great test against a very high-level player.''

Dominika Cibulkova of Slovakia lost the first nine games but recovered to defeat Frenchwoman Caroline Garcia 0-6, 6-3, 6-4 to reach the round of 16.

Tenth-seeded Swiss Timea Bacsinszky beat Ekaterina Makarova of Russia 6-4, 5-7, 6-4, while Samantha Stosur earned a place in the third round after 11th-seeded Lucie Safarova withdrew because of a stomach virus.