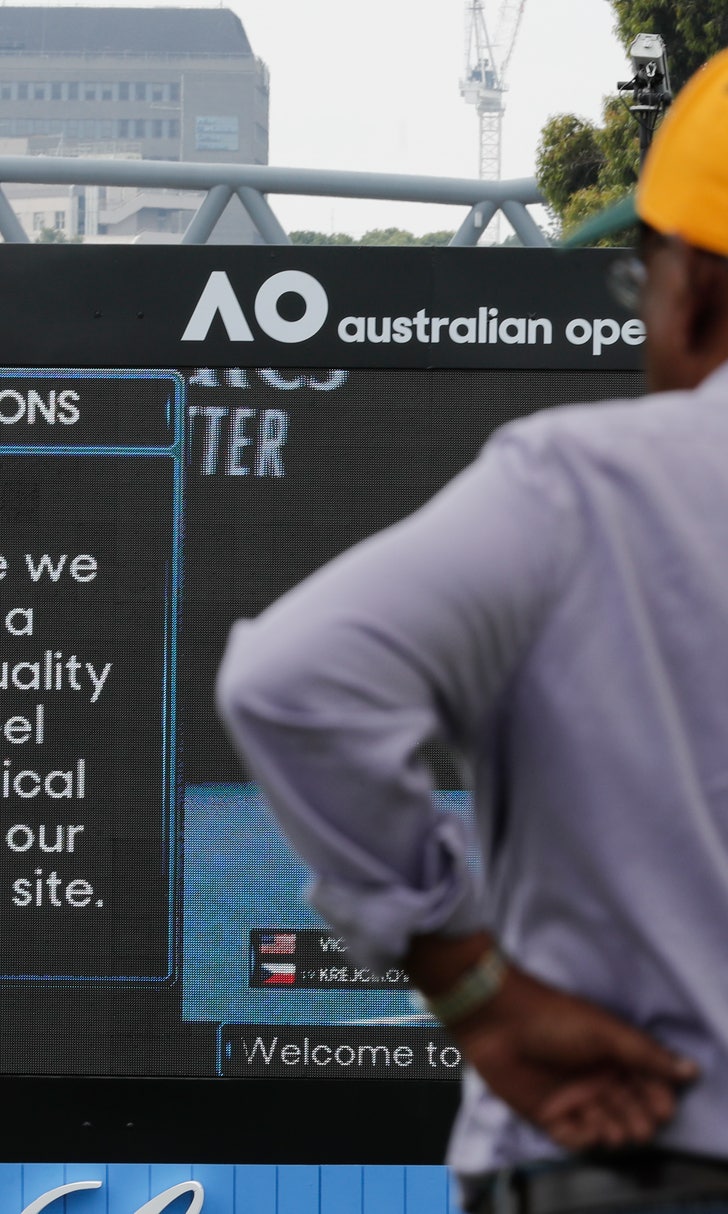 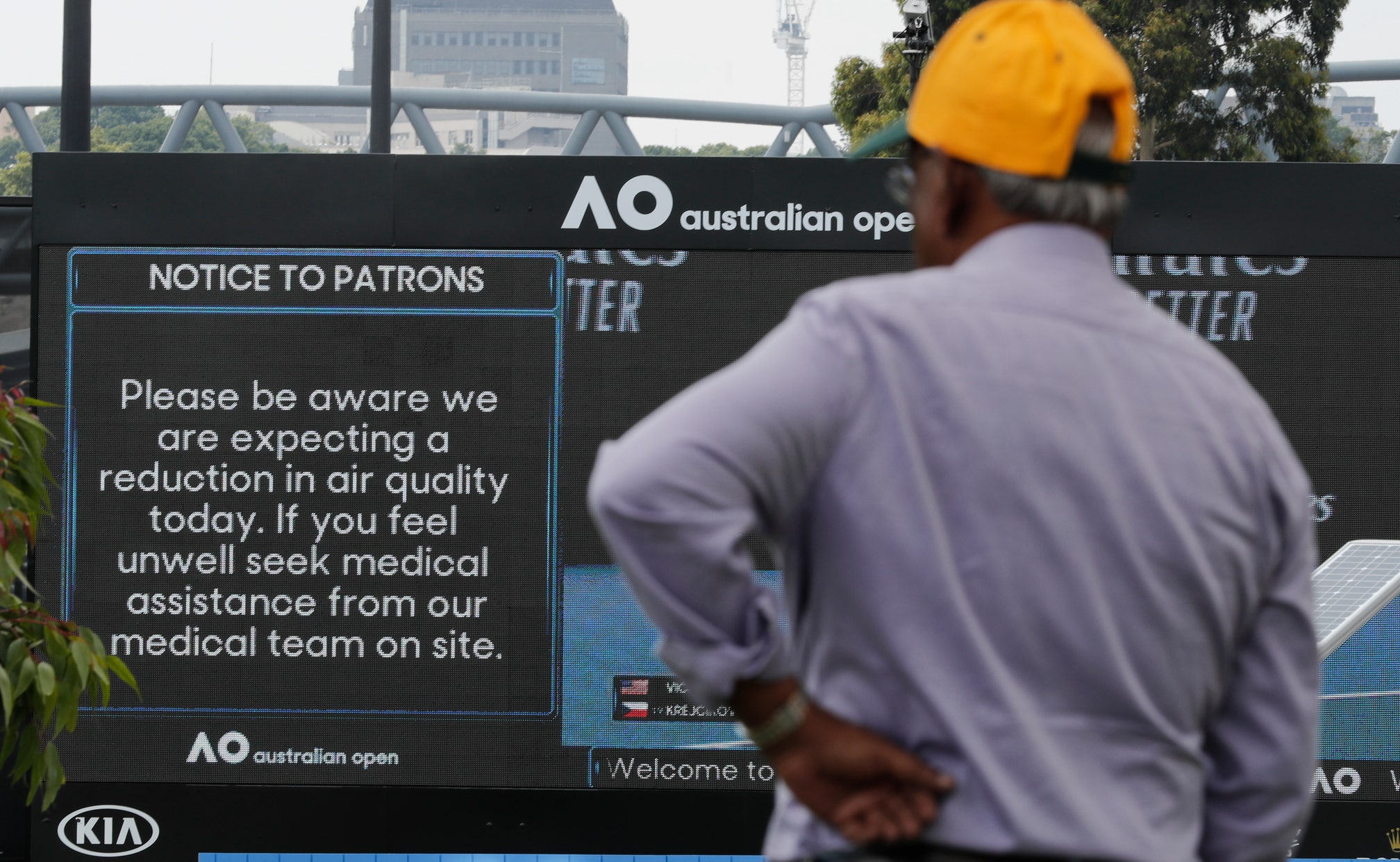 Federer, Nadal seem sure all will be OK at Australian Open

MELBOURNE, Australia (AP) — As messages on video boards cautioned Australian Open spectators to "be aware we are expecting a reduction in air quality" Saturday, Roger Federer and Rafael Nadal seemed satisfied that all will be fine at the year's first Grand Slam tournament despite recent days of smoke arriving from wildfires burning 100 or so miles away.

The haze hanging over Melbourne Park lately lightened as Monday's start of main-draw action approaches, but even if things worsen, the owners of a combined 39 major championships were among the players saying they're confident tennis officials will make sure conditions are safe before allowing competition.

Federer and Nadal both said they marched themselves down to the tournament referee's office to understand what was going on when local news reports were saying people should stay indoors, yet qualifying rounds were taking place outdoors at Melbourne Park.

On Tuesday, one player collapsed in a coughing fit; another sought medical attention for breathing problems.

"I said, 'I think we're all confused. Is it super unsafe or is it totally safe to play?'" Federer said. "I told them, 'Look, I just think communication is key for all of us, for everybody. We just need to do more.' Because I feel like I hadn't gotten enough information."

Two weeks ago, as the fires in eastern Australia raged, leading to the deaths of more than two dozen people and millions of animals, defending champion Novak Djokovic wondered aloud whether the event might need to be delayed until the air improved. Tournament director Craig Tiley pointed out a week ago there are three stadiums with retractable roofs, plus eight indoor courts, which could be used if need be.

The hope, of course, is none of that will be necessary. Rain is in the forecast for four of the next five days, which could help matters.

The top-ranked Nadal said he was told air measurements were being taken every four minutes and the standard for how clean samples need to be is more stringent than that used by the International Olympic Committee.

"I really cannot believe that the most important committee in the world wants bad health for the competitors," Nadal said. "So that answer convinced me. I am here to play."

Others were not quite so ready to adopt that mindset -- or agree with Federer's stance on the issue, which he summed up as, "I don't worry."

Particularly outspoken was Denis Shapovalov, a 20-year-old from Canada who said he didn't understand the air quality policy issued by the tournament.

"You get an email from the tournament saying that it's playable, and 'you guys have to go out and put your life in jeopardy, put your health in jeopardy.'

"You see the effects on players it has right now, the last couple of days," the 13th-seeded Shapovalov said. "But also you don't know what it's going to do later in our lives and how it could affect us if we're breathing this air in for two weeks."

He said he wouldn't play a match if he felt the conditions weren't safe.

"Obviously, it's a Grand Slam, a big opportunity, but I'm 20 years old," Shapovalov said. "I don't want to risk my life, risk my health, being out there playing in this condition, when I can for the next 10-15 years."

Stefanos Tsitsipas, a 21-year-old from Greece who upset Federer a year ago in Australia en route to his first Grand Slam semifinal, said he had trouble breathing after an indoor practice session when he first arrived in Melbourne.

"I'm feeling OK now, but I was a bit concerned," the sixth-seeded Tsitsipas said. "I was coughing a lot."

Like Nadal and Federer, three-time major semifinalist Grigor Dimitrov took the view that tournament and tour officials have "been looking after us."

"I never think they're going to jeopardize our health over anything," Dimitrov said.

Two players who have asthma, two-time Wimbledon champion Petra Kvitova and 2019 U.S. Open semifinalist Matteo Berrettini, said they were worried about how they would fare in Melbourne.

Both have been OK so far.

"It's the same for everybody. It will be really difficult to breathe, for sure," Kvitova said. "I do have my medicines here."