U.S. women will win the moment, but can they win for history?

In the history of World Cup soccer for American women, there will always be two years: 1991 and 1999. These two years were when one of the greatest teams in the history of all sports won the Women's World Cup. The first time they did it in relative anonymity, the second time it happened to be in front of 90,000 Rose Bowl fans and 40 million more on TV.

In this same history of World Cup soccer for the U.S. women, there are also the failed efforts in 2003, 2007 and especially 2011, when the U.S. women lost on penalty kicks to an inspired Japan. Three times, a well-funded, well-drilled USA failed to meet the expectations set 25 years ago by the founding mothers of women's soccer in America.

Mia Hamm, Julie Foudy and Michelle Akers led a group of American heroines forever known as the "99ers.” They are considered the greatest players ever on the greatest women’s team, and they have left a lot to live up to. Consider: the greatest scorer in the history of women's soccer has never won the World Cup. Should the USA fail again in Canada, what is now a disconnect between the 99ers and the women of Abby Wambach's era will be seen as a chasm.

"After the 2011 final, I felt heartbroken. Shocked. I really believed we were going to win, especially after the game against Brazil, and then taking the lead against Japan in extra-time. But Homare Sawa had another plan for her team, and her country. In 2015, to win is going to take a little bit more," Wambach said.

That is the tension that underlies the 2015 Women's World Cup.

There are a lot of questions about this American team ahead of Canada.

One of them is: has the U.S. really done all it can to cultivate a larger, younger pool of talent to compete with the likes of Germany, Japan and France -- countries that have also poured resources into women's soccer development and delivered World Cup title-worthy teams?

Another: has the U.S. relied too much on aging stars to sell tickets to friendlies instead of digging into the high school and college ranks to create more competition for national team spots?

History suggests those moves are mistakes. But these days, real time -- not history -- is what matters. History can and will get drowned out by the din and demands of "right now." Right now, the U.S. women's World Cup team lives in the Snapchat/Twitter/Instagram world and, frankly, there's no team better suited to this dynamic than the one announced this week by U.S. women's national team coach Jill Ellis.

These U.S. women can win a day. They certainly make for compelling stories and narratives and social media click-a-thons. We'll have to see if they can win the Cup. 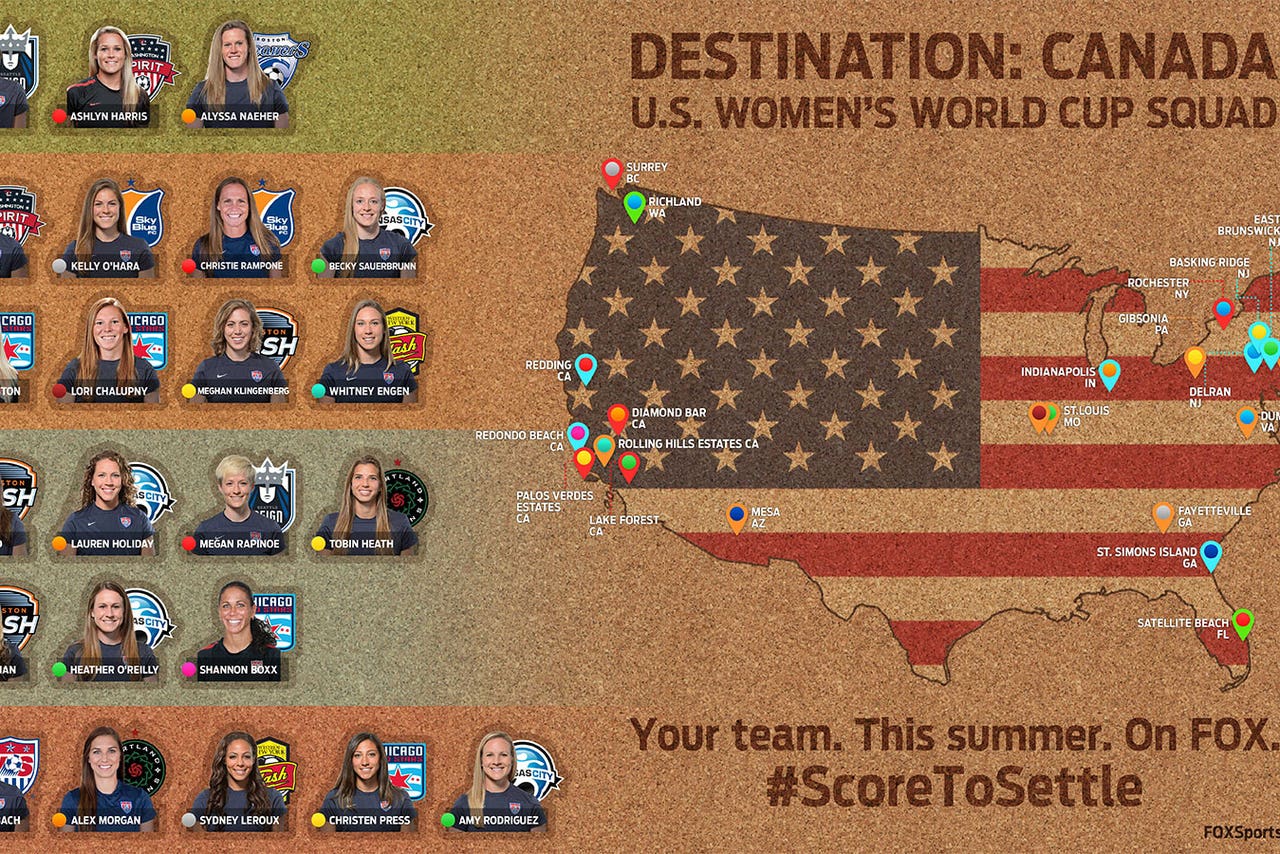 U.S. Soccer announced the 23-player roster that will represent the United States at this summer's Women's World Cup in Canada.

One thing is unquestionable: the love affair with this team about to begin. Americans love winners and they love big events.

America is going to know when the U.S. games are being played, and they will watch them on FOX this summer. Some will drive across the border to see the team play live in Winnipeg, where the team's opening game on June 8 is already a sellout.

America is going to get fired up at the prospect of the U.S. women's World Cup team bringing home the most coveted trophy in all of sports, because the players will deliver the Stars & Stripes message that always incites pride and viewership during World Cup summers.

"It's an honor to represent our country at an event like the World Cup. I am thrilled to be on the roster and I hope to make our nation proud,'' said Becky Sauerbrunn, the St. Louis native whose defensive prowess on the back line will win the hearts of soccer fans across the country.

Hype? Well, yes. Starting now, America is going to get a healthy dose of that hype for this Women's World Cup squad. Look at the promos. Look at the marketing. Look at the social media powerhouses, from the U.S. federation to the media outlets covering the World Cup right down to the players themselves. Look at the trailer for the U.S. Soccer video feature: 1 Nation, 23 Stories.

Never before has a women's sporting event been played at a time that will blow up on the Twitter feeds, the Instagram accounts, Facebook pages and the Tumblr blogs of women such as Sydney Leroux, Alex Morgan, Megan Rapinoe. Every single player has some sort of social media account, and they are well-followed by a rabid fan base.

This Women’s World Cup is also a dream made-for-TV event, played in a nice set of time zones for America, with a cast ready to play a starring role. The Americans are poised. They are smart and funny. They are personable and diverse, checking off a wide range of categories that detail and highlight the female human condition.

On the world stage, playing the world's game, the U.S. women are adept, fit, talented, deep, compelling. Even the most controversial among them draws the eye. Hope Solo, arguably the best goalkeeper in the world, has been aggressive, outspoken, troubled and mesmerizing.

"It's funny, because I am a veteran now and it's my third World Cup, but still, when the roster was set, when (coach) Jill (Ellis) called me up and said 'Congratulations, you've made the World Cup roster,' I still felt emotional, happy, filled with joy and proud. Anything can happen. You work for four years to make another roster and another roster and so it was just a nice dose of reality to know that I officially made the roster," Solo said Tuesday, when the 2015 U.S. team was set.

Now, by June 16, when the U.S. wraps up group play against Australia, Sweden and Nigeria, it is highly likely that the USA’s love affair with these women will be at fever pitch. It is also true that by then, the shift from blind love and patriotic allegiance to the U.S. players and team could have grown a little shaky.

The fact is, women’s soccer has grown. The players from France, Canada, Australia, Germany, Sweden, Brazil and Japan are all pretty good. They are likely to remind Americans that perhaps we need to up our game. Unlike the U.S. men, who have seen their stature grow in global soccer, the U.S. women have been on top so long that other countries have moved to challenge their supremacy.

So, if the U.S. finds itself in rougher waters in the group stage or the knockout rounds, that's when the shift from adoration to inquiry will begin. Another question: how come the U.S. hasn't won the World Cup since '99? And how can they regain that dominance and edge?

This is the history, perhaps overlooked, that also underscores the Americans’ World Cup. The only way this history stays overlooked is for the U.S. to roll into Vancouver and rack up their first Cup since '99.

If they do not, a team built for the moment will have to confront the past -- and future.