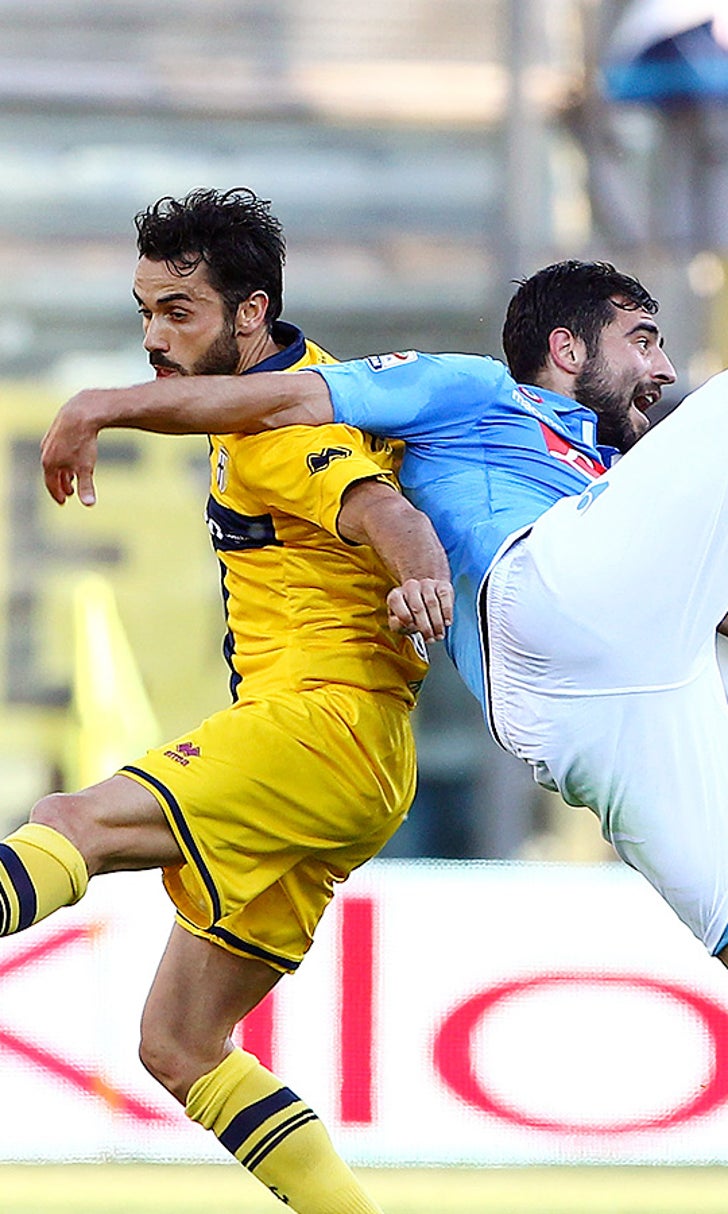 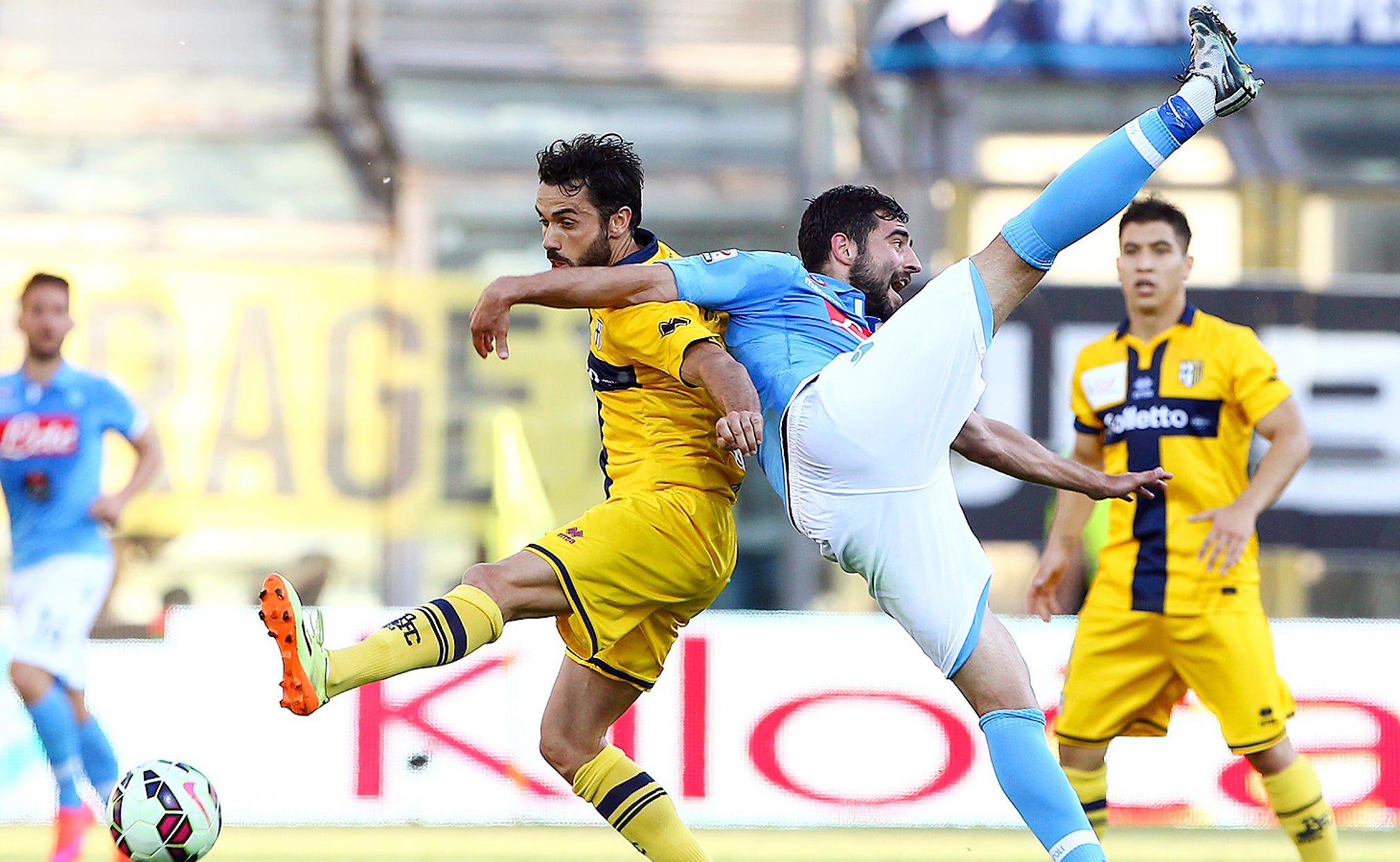 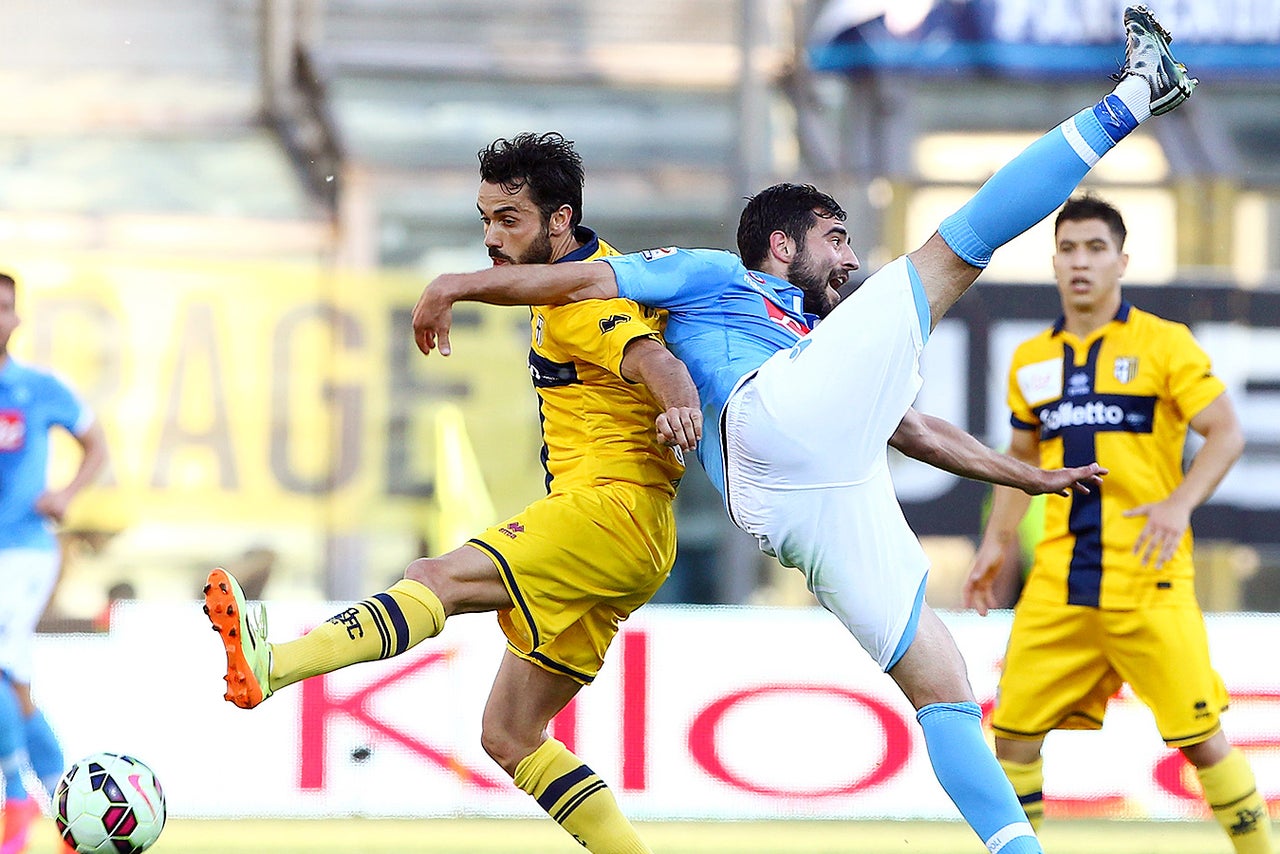 Napoli damaged their chances of finishing in the top three as it drew 2-2 at already relegated Parma in Serie A on Sunday.

Parma twice took the lead through Raffaele Palladino and Cristobal Jorquera but Napoli hit back each time, thanks to goals from Manolo Gabbiadini and Dries Mertens.

Napoli moved three points behind third-place Lazio, which hosts Inter Milan later and hope to take advantage of Roma's defeat at AC Milan on Saturday and move above their city rival.

Fiorentina kept up their pursuit of a European spot by beating Empoli 3-2 to move back above Sampdoria, which crushed Udinese 4-1 earlier.

At the other end of the table, 10-man Atalanta clung on to win 3-2 at Palermo to boost their chances of avoiding the drop and ensure Cesena, beaten 3-2 by Sassuolo, was relegated.

Second spot offers direct entry into the Champions League, while third carries a berth in the last playoff round. With three rounds remaining, Napoli's best chance of admission might come by winning the Europa League.

They drew 1-1 at Dnipro Dnipropetrovsk in the first leg of its semifinal and Rafa Benitez rested a number of players ahead of Thursday's return match.

Napoli goalkeeper Mariano Andujar gifted Parma the lead in the ninth minute when he flapped at a corner, allowing Palladino to turn into an empty net from close range.

Napoli leveled in the 28th after Marek Hamsik slotted the ball through to Gabbiadini. Antonio Mirante got a hand to the angled drive, but not enough to stop it rolling into the bottom left corner.

Parma swiftly restored their lead as a well-worked free kick allowed Jorquera to fire in a screamer from 25 yards for his first Serie A goal in more than three years.

Mirante denied Napoli several times before and after Mertens netted the equalizer in the 72nd with a solo effort.

In the Tuscan derby, Fiorentina was looking to bounce back after losing 3-0 at Sevilla in the Europa League and with four defeats in their past five Serie A matches.

Josip Ilicic got it off to a perfect start in the fourth minute, curling a superb effort into the far side of goal.

Riccardo Saponara missed several opportunities before bursting into the area between two defenders in the 28th and managing to stay on his feet as he stumbled to net the equalizer.

Mohamed Salah restored Fiorentina's lead with a magnificent effort, going past two players, before Ilicic scored his fifth goal in three league matches to make it 3-1.

Empoli substitute Levan Mchedlidze opened up the match again in the 77th when he scored a minute after coming off the bench.