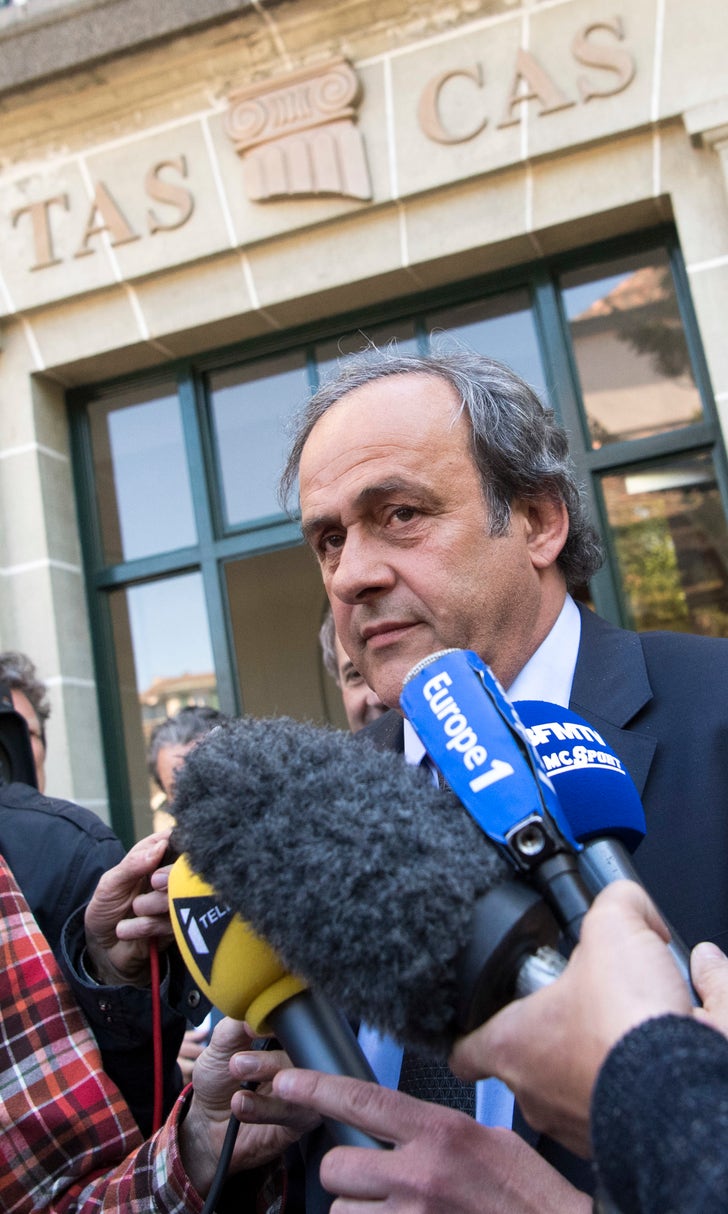 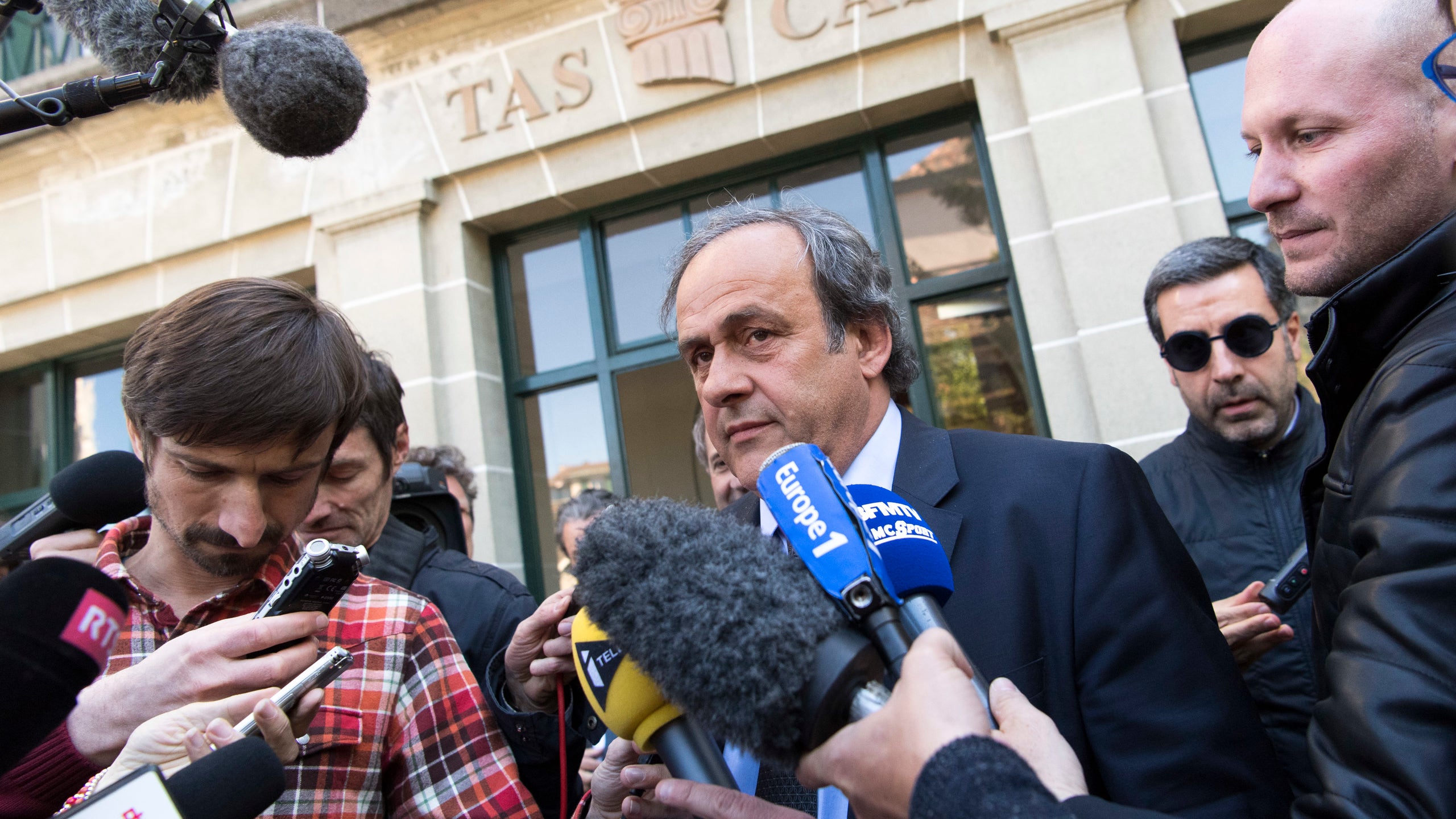 NYON, Switzerland (AP) — Four years after a ban for financial wrongdoing thwarted his chances of becoming FIFA president, Michel Platini is free to work in soccer again on Tuesday.

However, the former UEFA president — who was once seen as the heir apparent to FIFA's Sepp Blatter — said Monday he is still unsure where and when he will return to the game that has continued to dominate his life even after his stellar playing career with France.

"I have some idea but it's difficult to speak today," Platini told The Associated Press in an interview about his future plans, hours before the ban was set to expire.

And any comeback into a senior role would likely force him to first pay FIFA a fine of 60,000 Swiss francs ($60,300) that is three years overdue. Platini is still challenging that fine in court and continues to dispute the allegations that led to his four-year ban from all football activities. The charges of receiving an irregular payment and wrongful pension entitlement approved by Blatter derailed Platini's hopes of succeeding his former mentor as the head of global soccer.

Now aged 64, Platini looks hardly to have aged at all during that ban, which became the longest vacation of his storied life in soccer.

The former France said he is keeping all options open, but pointed out that the next elections for top roles at FIFA, UEFA and the French football association are "some years ahead."

In the Paris headquarters of the French federation, the 77-year-old Noël Le Graët, recently promoted by UEFA to a seat on FIFA's ruling council, is in office until 2021.

"It's not now," said Platini, who captained and coached the national team, and organized the 1998 World Cup won by France at home. "I have time, if I come back to this."

Currently, his focus is on what is likely the last legal fight against allegations that were upheld so far by two FIFA judicial bodies, the Court of Arbitration for Sport and Switzerland's supreme court.

Platini has challenged the Swiss federal ruling at the European Court of Human Rights in Strasbourg, and "that means I don't pay this fine" until a ruling is issued.

That ongoing sense of injustice, and unpaid debt, could cause FIFA's ethics committee to impede his return.

"They will try to use what they want so that I don't come back, I am sure," Platini suggested of soccer's world body, which has been led since 2016 by his former general secretary at UEFA, Gianni Infantino.

FIFA declined to comment Monday on its rules enforcing payment of fines. It did confirm that Blatter paid his fine of 50,000 Swiss francs ($50,250) first imposed in 2015.

Blatter is serving a six-year FIFA ban, upheld by CAS, for authorizing a $2-million payment to Platini in 2011 as backdated salary for work as his adviser a decade earlier. Blatter also approved extending his former protege's FIFA pension plan, that added more than $1 million by 2015.

Court documents state Platini later asked to be credited with four extra pension years for his time as an adviser, when the scheme was intended only for executive committee members.

"I never asked for the pension, it was Blatter who gave me that," Platini said Monday.

The Frenchman also weighed in on several other issues concerning global soccer.

Platini said the 2022 World Cup in Qatar will be wonderful for fans.

Qatar won a FIFA hosting vote over the United States in 2010 that Blatter has often blamed on Platini changing sides, and taking other European voters with him. Platini was said to be pressured at a lunch meeting in Paris with then-president Nicolas Sarkozy and the crown prince of Qatar, now the Emir.

"It was not important, it was one vote," he said Monday about his own role in Qatar's victory.

Platini stressed that he was not arrested and said he was asked about "Blatter, FIFA TV rights, Qatar, Paris Saint-Germain" during the questioning.

Platini was ambivalent about going to Qatar for the FIFA Club World Cup in December — the first big test there of World Cup planning.

He noted that he was not invited by organizers to the 2018 World Cup in Russia or the 2017 Champions League final in Cardiff despite supporting both hosting bids.

"I don't wait on (anything) from anybody," he said.

Never a fan of technology in soccer, Platini is unhappy with the effect of video review to help referees.

He said the video system "killed" the referee's authority and atmosphere in the stadium when fans can't immediately be sure if a goal will count.

"It's a joke but unfortunately I think we will never go back," he said, suggesting there were mistakes for both of France's first-half goals in the 2018 World Cup final that video review could not or did not correct. France beat Croatia 4-2.

Platini will have a book published in November reflecting on his post-playing career in soccer leadership.

It will include his claim that there was "two people sleeping" during his FIFA Appeal Committee hearing. It upheld the charges but reduced his ban from eight to six years. A CAS judging panel cut the ban to four years.

Platini said his career after playing was "something that I never expected."

"In the end, I was not so unlucky. It was nice. If I do nothing (next), it will be nice too," he said. "I am someone who always lives with the destiny. What happens, happens."