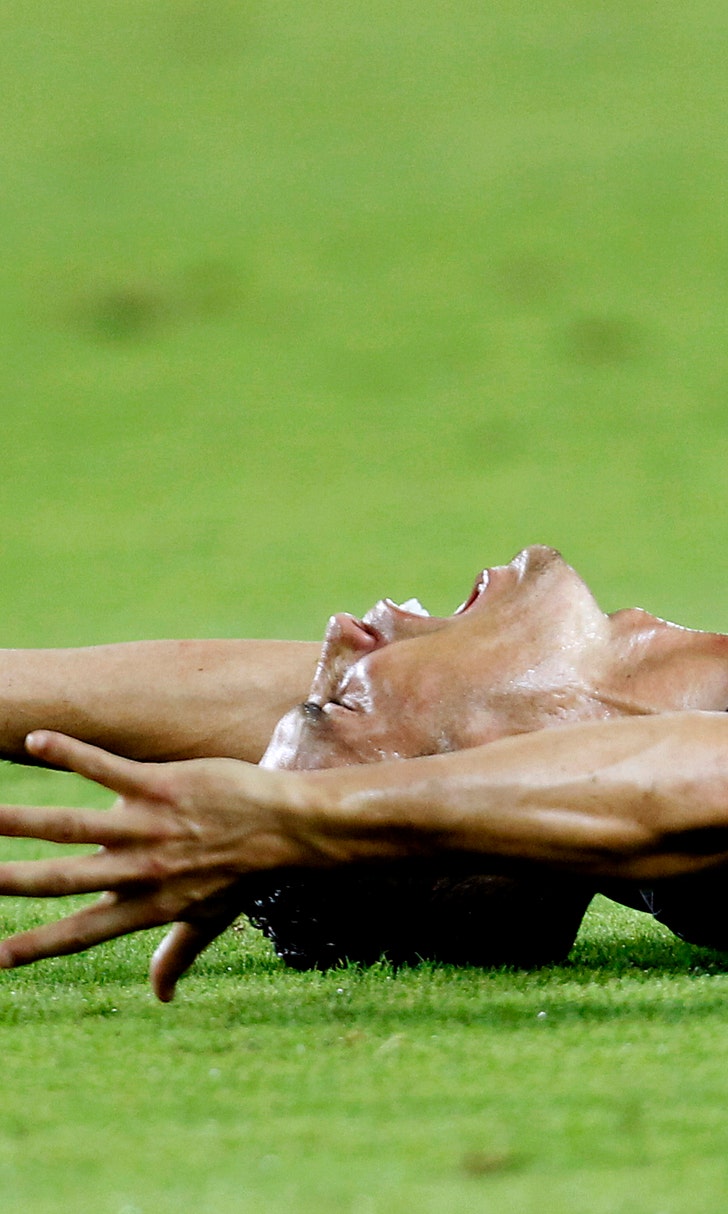 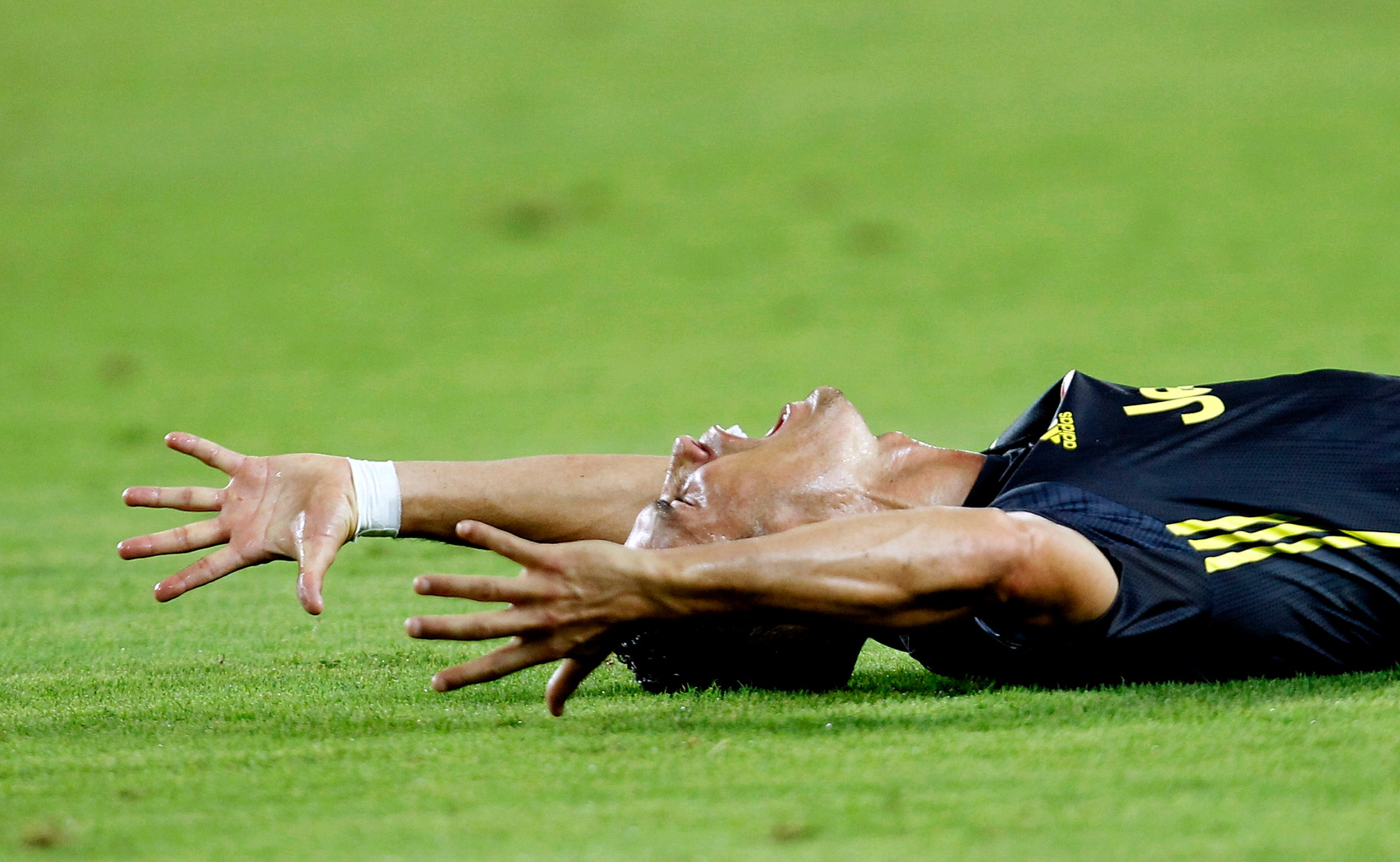 No Ronaldo? No problem for Madrid, Juventus in Champs League

GENEVA (AP) — Real Madrid managed to win easily in the Champions League without Cristiano Ronaldo. So did Juventus, after its superstar signing was tearfully sent off within 30 minutes.

Three-time defending champion Madrid eased to a 3-0 win over Roma on Wednesday, with Francisco "Isco" Alarcon scoring from the kind of free kick only Ronaldo got to take in his nine years with the club.

Ronaldo, making his Juventus debut in a competition he has won five times, also had a new experience — getting a red card against Valencia for tangling with Jeison Murillo.

Seemingly frustrated that Murillo went to ground too easily, Ronaldo reached down to tug or ruffle the defender's hair.

German referee Felix Brych did not have access to a video review but showed a red card after consulting his assistant behind the goal.

It was Ronaldo's first sending off in 154 games in the competition and left him in tears.

Still, Juventus went on to win 2-0, scoring twice from penalties despite designated spot-kick taker Ronaldo not being there. Miralem Pjanic scored both times.

Elsewhere, one of the favorites to dethrone Madrid this season, Manchester City, lost at home and Manchester United won away to further dispel its uneasy start to the season.

City was lackluster in a 2-1 loss to Lyon, while rival United had little trouble winning 3-0 at Swiss champion Young Boys.

Here's a look at Wednesday's games:

It could have been tricky for Madrid. No Ronaldo on the field, no Zinedine Zidane in the dugout, and facing Roma, a semifinalist last season.

But it was business as usual for the 13-time European champion under new coach Julen Lopetegui.

Isco, Gareth Bale — who seemed sure to leave if Zidane stayed — and Mariano Diaz got the goals.

Bale finished off an accurate pass by Luka Modric, and goalkeeper Keylor Navas kept a clean sheet after being preferred to new signing Thibaut Courtois.

Also in Group G, CSKA Moscow trailed 2-0 at halftime, but a stoppage time penalty from Nikola Vlasic made it 2-2 at Czech champion Viktoria Plzen.

A troubled opening half hour for Juventus in Valencia saw Mario Mandzukic and Sami Khedira miss clear chances before Ronaldo left the field in tears.

Just before halftime, Joao Cancelo hit the crossbar with a shot and was then fouled by a high boot to the face while chasing the rebound.

Miralem Pjanic converted that penalty kick, and scored again six minutes into the second half when Murillo was penalized for a foul.

There was a third penalty in stoppage-time, but Juve goalkeeper Wojciech Szczesny saved Daniel Parejo's kick to preserve the 2-0 win.

Though Pogba has been unsettled at United this season, his curling shot and trademark slow-trot penalty within eight first-half minutes suggested he is feeling happier now.

United had lost on its last two trips to Switzerland, both against Basel, but is in a good position to welcome Valencia in two weeks' time.

Old Trafford could also be denied a reunion with Ronaldo for Juve's Oct. 23 visit depending on the ban UEFA imposes.

With coach Pep Guardiola watching in the stand, serving a ban carried over from last season, Man City was surprisingly beaten 2-1 by visiting Lyon.

City trailed by two goals at halftime, when errors were punished by Maxwel Cornet and Nabil Fekir, a member of France's World Cup squad.

The manner of City's Premier League title win last season has persuaded many that Guardiola can add to his two Champions League crowns with Barcelona.

But the stadium was far from full Wednesday, and City only managed to pull one goal back in the 67th from Bernardo Silva.

The other Group F game saw Hoffenheim make its Champions League debut in Ukraine. Playing at its adopted home city Kharkiv, Shakhtar Donetsk got a late leveler in a 2-2 draw.

Renato Sanches has often looked like a lost talent since helping Ronaldo and Portugal win the 2016 European Championship.

Then 19, a move from Benfica to Bayern Munich seemed to happen too soon and he was sent to Premier League struggler Swansea on loan.

Back in Lisbon on Wednesday, Sanches scored Bayern's second goal in a 2-0 win after Robert Lewandowski got Bayern's early opener.

Also in Group E, Ajax marked its return after a four-year absence to join Madrid as the only home teams winning Wednesday, also by 3-0.

In the Johan Cruyff Arena, Ajax dispatched AEK Athens with the help of two goals from Argentina defender Nicolas Tagliafico.