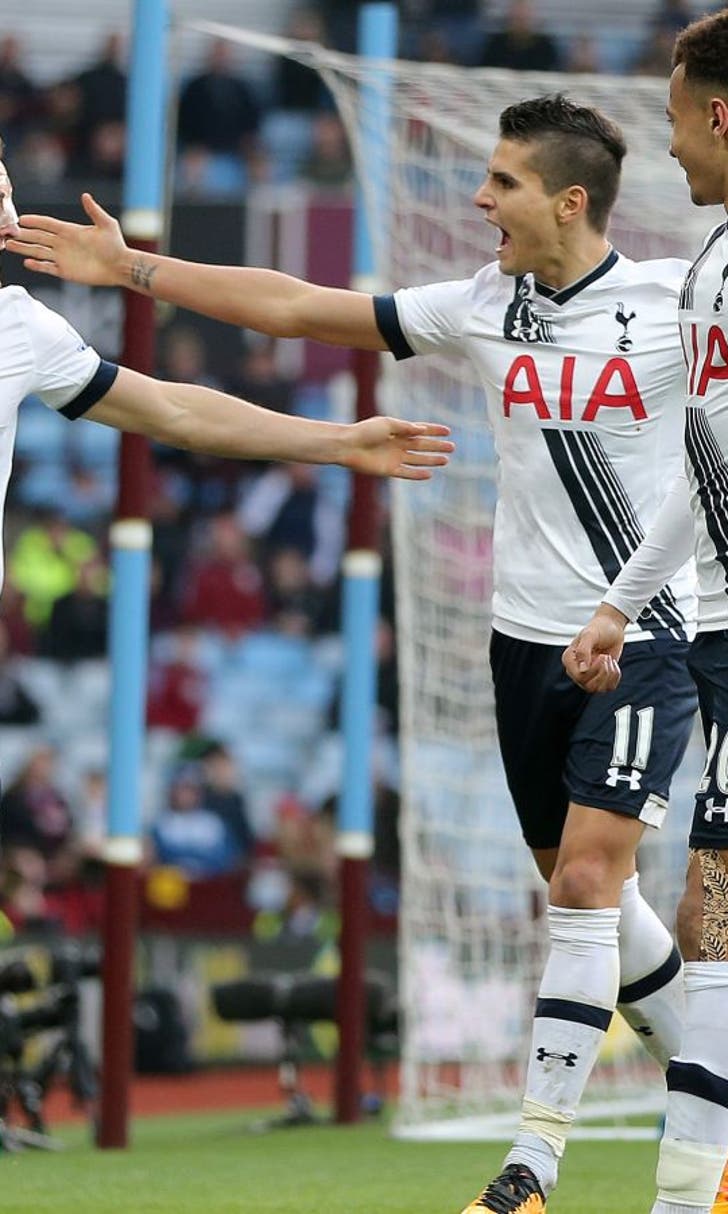 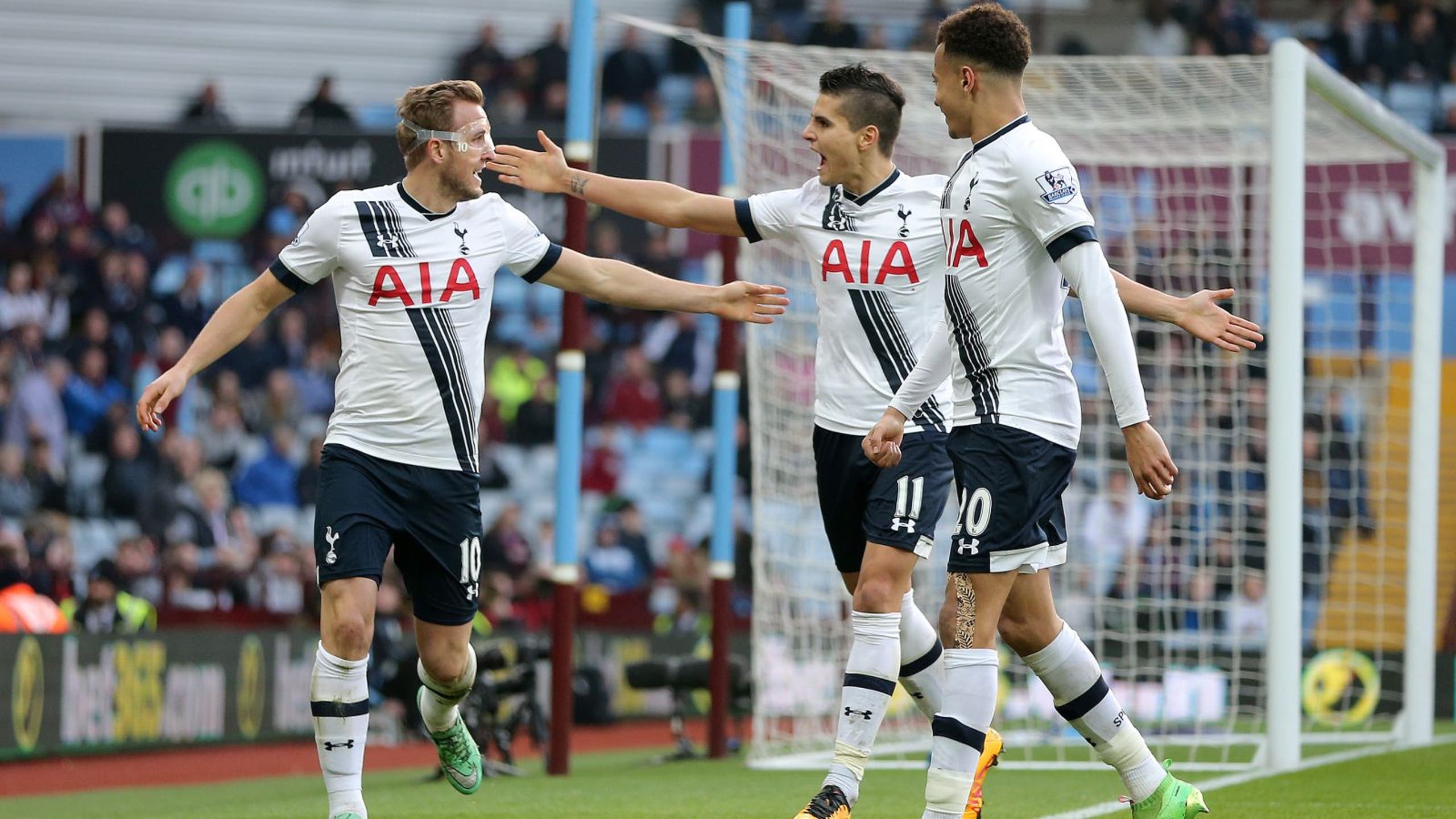 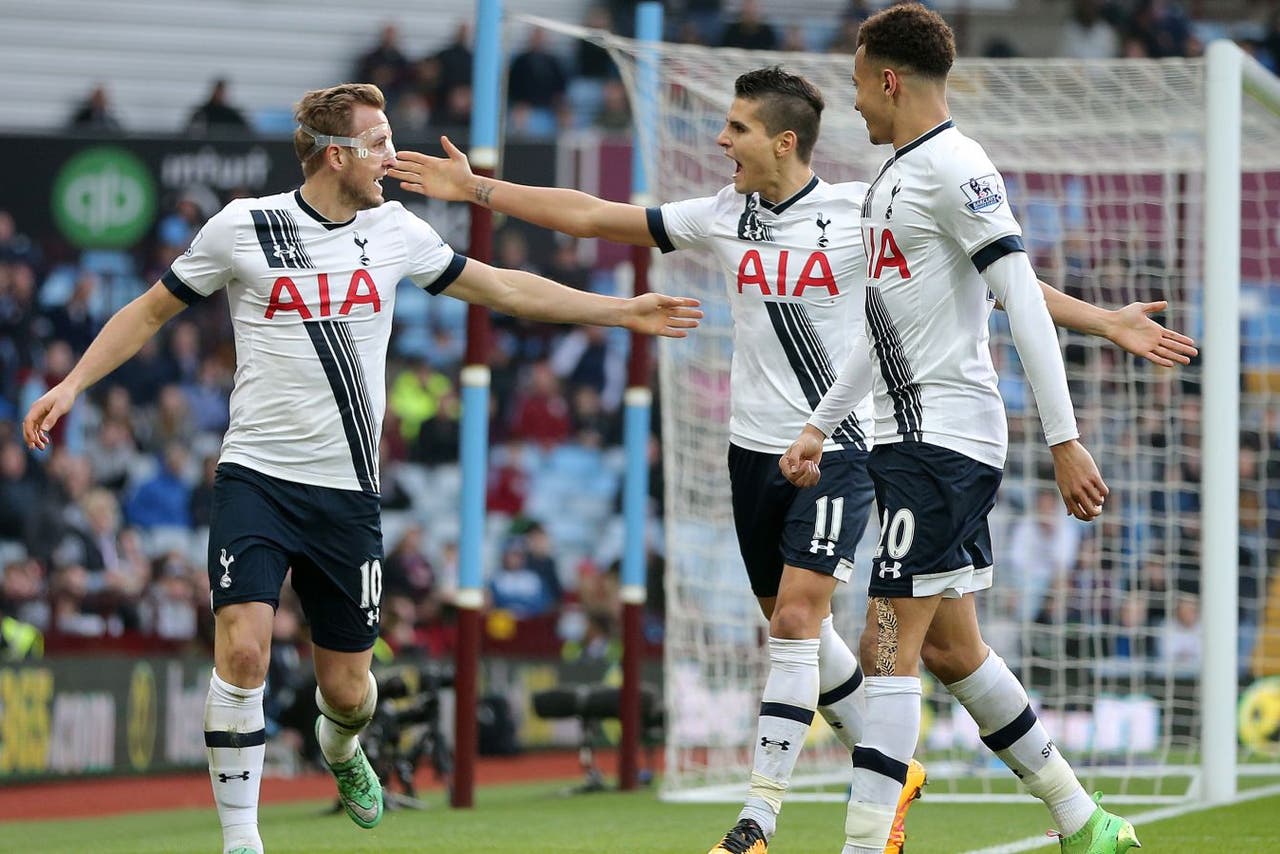 Mauricio Pochettino's men won their first match in three after comfortably downing their relegation-threatened opponent with two goals from their star striker at Villa Park.

Tottenham put the pressure on Premier League leader Leicester City as Harry Kane scored twice in a 2-0 victory over bottom side Aston Villa at Villa Park.

A goal either side of halftime from Kane enabled Tottenham to close the gap to Leicester to just two points, with Claudio Ranieri's team the opposition for Rafael Benitez on Monday as the former Real Madrid coach takes charge of Newcastle United for the first time.

Kane quickly set about troubling the Villa back line, clipping an effort onto the crossbar in the fifth minute - Remi Garde's decision to drop captain Micah Richards and switch to a back four following the 4-0 drubbing at Manchester City immediately coming into question.

Villa goalkeeper Brad Guzan proved a formidable obstacle, but, after parrying a shot from Erik Lamela onto the post, he was beaten by a sweeping finish from Kane on the stroke of halftime.

It took the England international just three second-half minutes to double his tally, turning a sumptuous pass from Dele Alli into the top-left corner to make it 19 goals in the league this season.

Jordan Ayew, Rudy Gestede and Joleon Lescott all struck the post in quick succession for Villa inside the last 10 minutes, but a 20th Premier League defeat of the season - equaling a club record - was inevitable and the side remains nine points adrift of safety at the foot of the table. Tottenham's title dream, meanwhile, remains a distinct possibility.

After criticism for leaving a number of key players out of Tottenham's 3-0 defeat to Borussia Dortmund in the Europa League on Thursday, Kane, Lamela, Alli and Mousa Dembele were restored to a starting lineup from Mauricio Pochettino that included seven changes.

Two of the returning players combined to create the first opening inside five minutes, with Lamela sliding a pass through for Kane, whose attempt to clip an effort over the onrushing Guzan hit the crossbar.

Alli rifled a 25-yard shot straight at the Villa goalkeeper as Tottenham continued to apply the early pressure, while Eriksen sent a shot from a similar distance wide in the 18th minute.

Garde's team got the fans on side with some attacking spells of its own, but needed a pair of saves in the space of two minutes from Guzan to stop Kane converting.

The Villa goalkeeper made another important contribution on the half-hour mark, stretching out an arm to Lamela's attempt to steer Kyle Walker's cross inside the post onto the woodwork.

But Tottenham finally broke the deadlock when Kane latched onto Alli's pass and stroked the ball across Guzan and into the bottom-right corner.

Kane added his second straight after the restart, steering Alli's excellent cross from the left into the roof of the net.

The goal hit Villa hard, with a drop off in the desire to press the opposition immediately evident.

Walker sent a powerful effort straight at Guzan, while Lamela had a shot deflected wide in the 75th minute as Tottenham showed far less urgency when going forward.

Villa had chances to make a game of it before the final whistle, Ayew and Gestede hitting the frame of the goal within seconds of one another with six minutes remaining.

Lescott also volleyed onto the upright, but it was not Villa's day as the club succumbed to a fifth straight defeat.