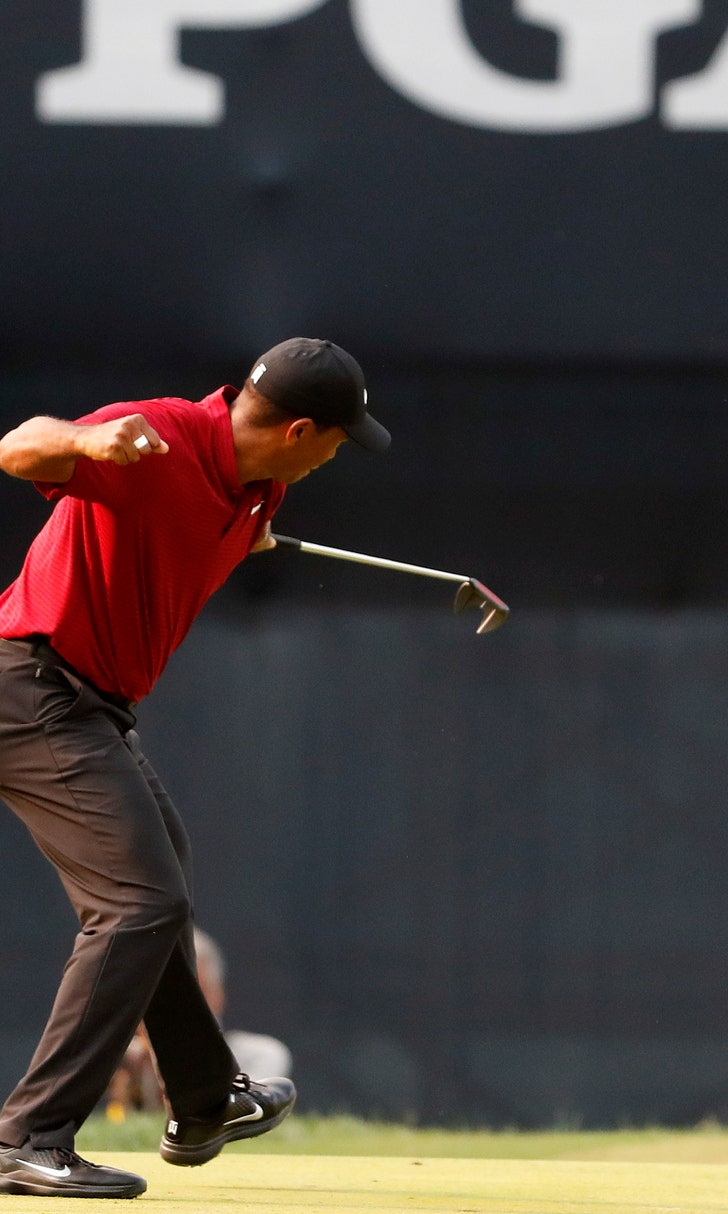 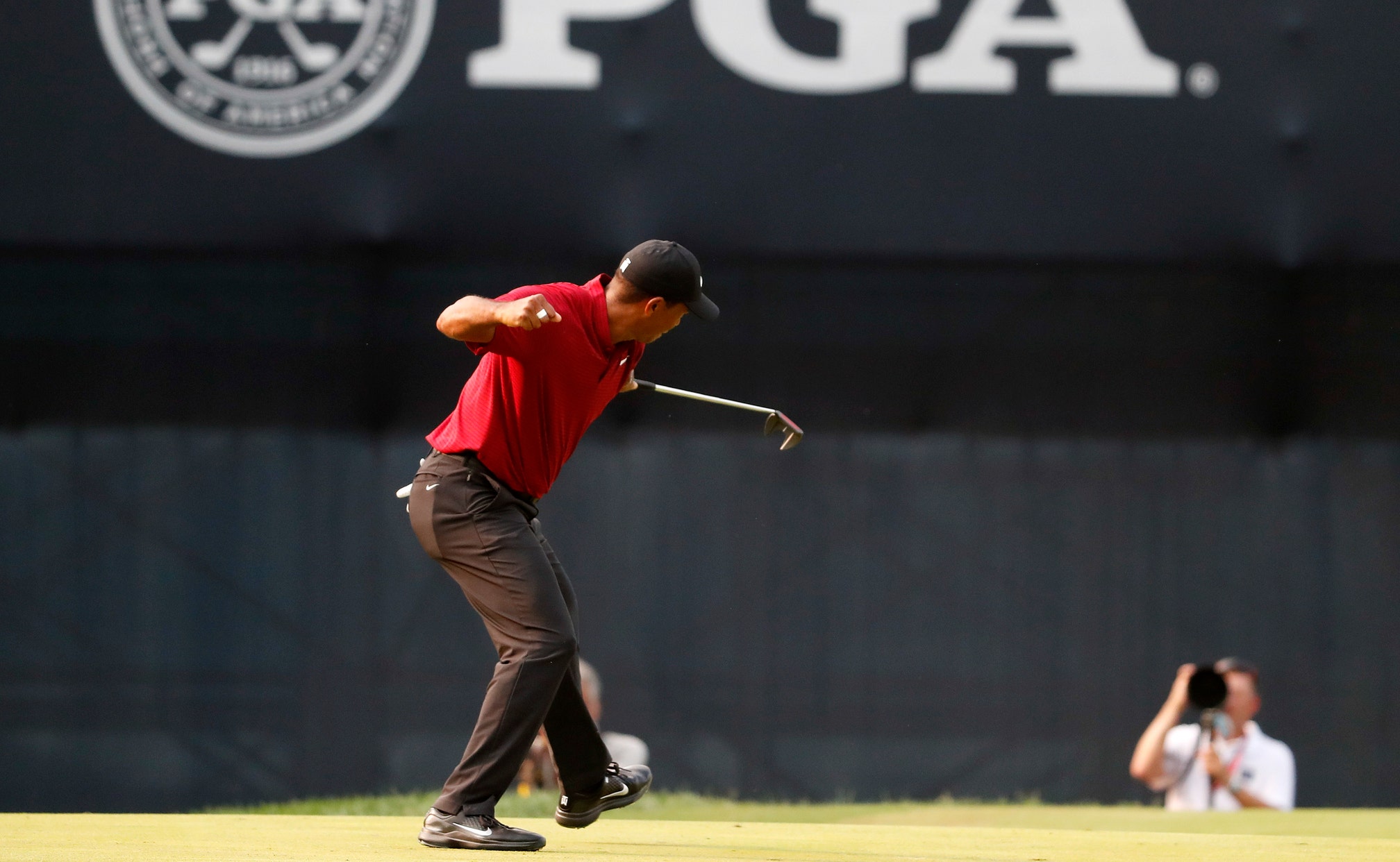 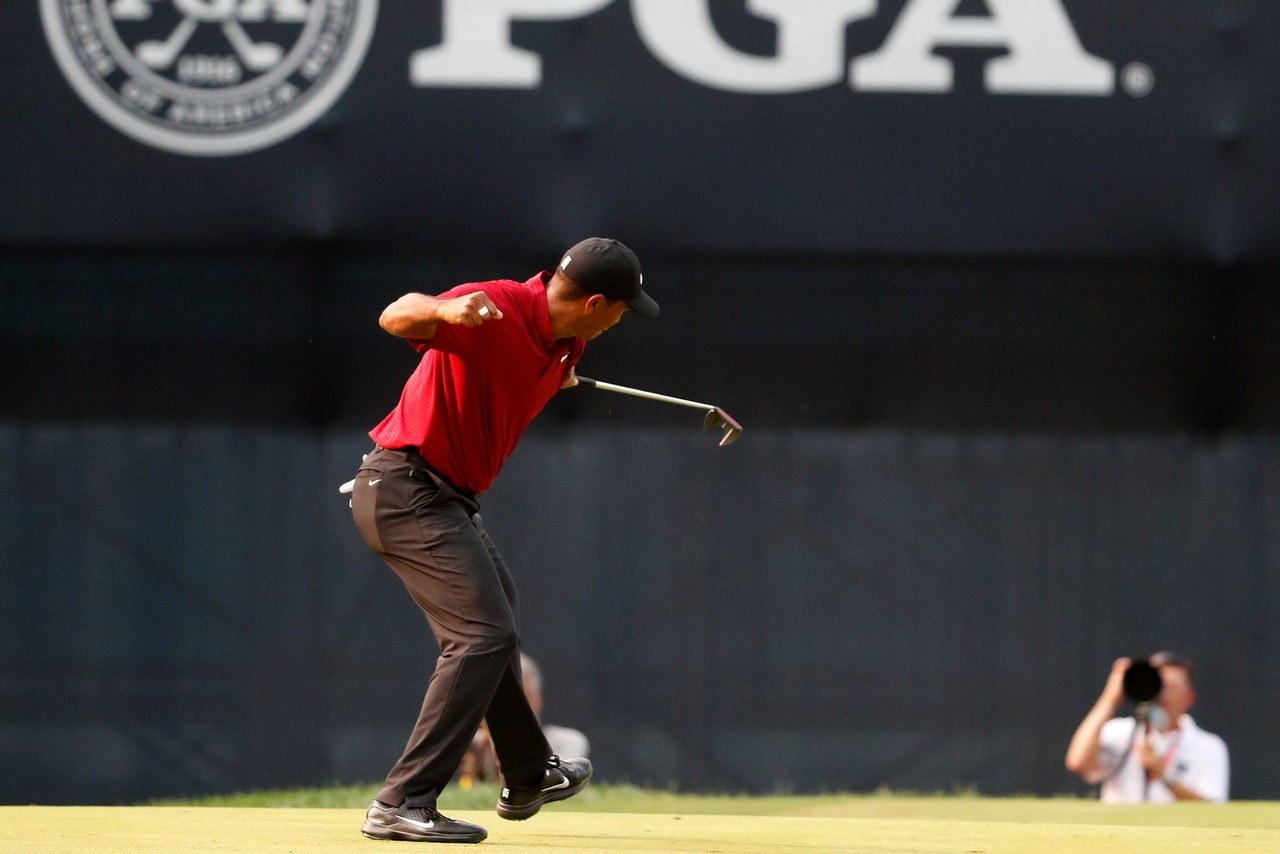 ST. LOUIS -- Over an ear-splitting afternoon in which most of the cheers weren't for him, Brooks Koepka got a taste of what golf feels like when Tiger Woods is in the hunt.

And in his exhilarating but ultimately futile attempt to catch Koepka at the PGA Championship, Woods got a taste of what it will take to get back on top in the majors.

Woods provided the thrills Sunday -- a fist-pumping, club-slamming, roller-coaster ride of a final round in which he threatened from beginning to end but couldn't knock Koepka out of the lead or deny him the trophy.

Koepka heard the commotion in front of him all day -- "You could hear a different roar like every 30 seconds, so we knew what was going on," he said -- but did what he does best at the majors: He put on a calm, collected show of precision golf to hold off Woods by two shots and become only the fifth person to win a U.S. Open and PGA Championship in the same year.

When it was over, Woods had a warm hug and a huge smile for the guy he calls "Brooksy."

"It's tough to beat when the guy hits it 340 down the middle," Woods said. "When a guy's doing that and hitting it straight, and as good a putter as he is, it's tough to beat."

Koepka set the PGA Championship record with a four-day score of 16-under 264. His best shot over a final round of 4-under 66 was a lasered 4-iron to the 16th green that landed 6 feet away and set up a birdie. That gave Koepka a two-shot cushion that allowed him to coast into the finish, much the way he did at Shinnecock earlier this summer, and at Erin Hills in last year's U.S. Open.

Drama? That was Woods' domain.

Boy, did he deliver.

Over a wild first nine holes, Woods didn't hit a single fairway off the tee but got up and down from everywhere. He needed a grand total of 10 putts to make the turn in 3-under 32 and stay within two shots.

He hit a poor approach on No. 11 but stared down a 30-foot putt for birdie that would have kept momentum on his side. The ball came to rest on the inner-edge of the cup -- much like the famous chip-in on the 16th hole at Augusta in 2005. That one went in. This one stayed out, and Woods bent down and dropped his hands to his knees in agony.

Roars echoed through the trees at Bellerive.

"We didn't mention it at all," said Koepka's caddie, Ricky Elliott. "It was pretty evident what Tiger was doing."

Woods could've made it louder.

He had a 20-foot putt on No. 16 to capture a share of the lead but pushed it barely off line. He followed by blocking his drive on 17 to the right of a creek that skirts the right-hand side of the par-5 hole. He scrambled for a par there when he really needed a birdie and was three back once he reached the 18th fairway.

For one final flourish, Woods sank a 19-foot putt for a birdie that got him to 14 under. He pumped his fist to celebrate.

"Making that putt at least gave me a chance," Woods said.

He needed Koepka to collapse over the last two holes.

It wasn't going to happen.

Koepka is proving to be the prototype player for his generation and beyond -- a 28-year-old workout nut who splits time between the weight room and the driving range. He has a deft touch and a pure putting stroke, but is more about overpowering golf courses than overthinking them.

He has now won three majors over the past 14 months -- and joins Jordan Spieth, Jack Nicklaus, Tom Watson and Woods as the only players since World War II with three majors before turning 30.

Getting the best of Koepka sets up as a daunting challenge for Woods, though the 42-year-old, 14-time major winner could easily argue he's been through worse.

He's had multiple back surgeries, and as recently as 11 months ago wasn't able to swing a golf club.

He has now contended on the back nine on Sunday in consecutive majors -- making it clear that Koepka, Dustin Johnson, Spieth and the rest of that generation could very well have to deal with him, and all the baggage that comes with him, in majors in 2019 and beyond.

"This is the first real Tiger effect I've experienced, with that many people," said defending champion Justin Thomas, who played two groups ahead and finished tied for sixth.

While Woods has never been one to celebrate a loss, he couldn't help but feel good about the road he's taken over the past year -- one that ended with a tantalizingly close call at Bellerive.

"I'm in uncharted territory," Woods said. "I had to kind of figure this out on my own and it's been really hard -- a lot harder than people think. And I'm just very pleased at what I've done so far ... going from where I've come from, to now over the last year, it's been pretty cool."