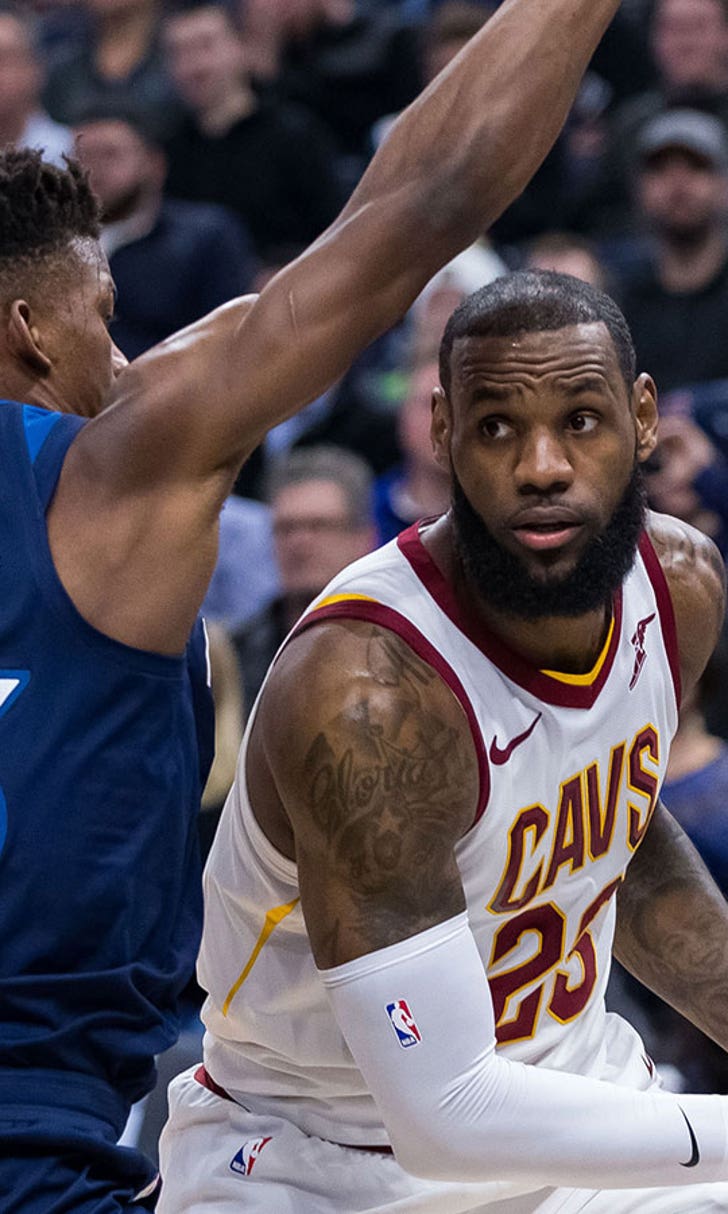 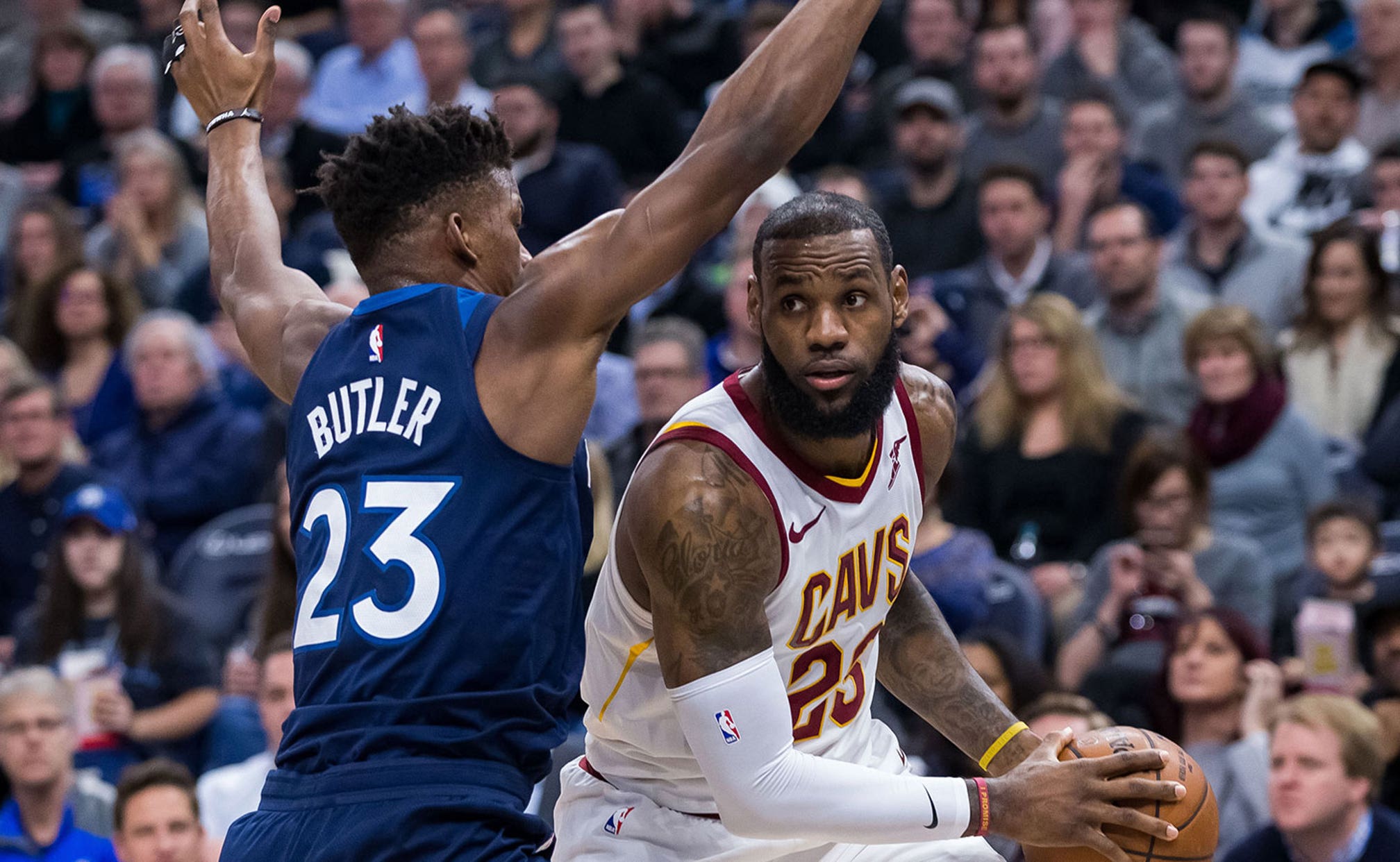 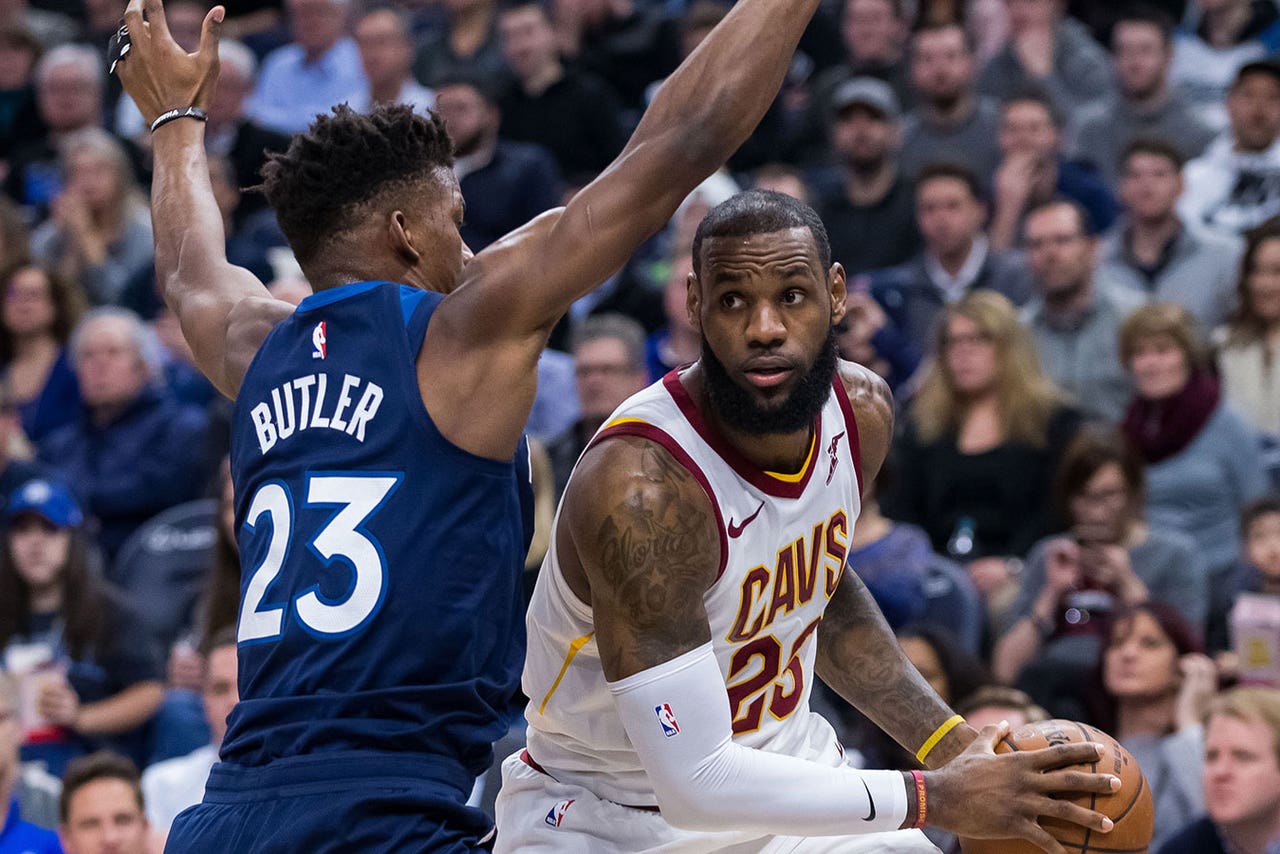 MINNEAPOLIS (AP) -- Andrew Wiggins had 25 points in three quarters, Jimmy Butler pitched in 21 points and tight defense on LeBron James, and the Minnesota Timberwolves cruised to a 127-99 victory over Cleveland on Monday night that stopped a 12-game home losing streak to the Cavaliers.

Karl-Anthony Towns (19 points, 12 rebounds) and Taj Gibson (16 points, 13 rebounds) were tenacious around the basket for the Timberwolves, who outrebounded the Cavs 56-37 and had a 60-42 advantage in points in the paint.

James had just 10 points on 4-for-8 shooting, taking his first loss at Minnesota since Feb. 17, 2005. Cleveland fell behind by as much as 41 points in the third quarter after a dunk by Wiggins set up by a driving pass by Tyus Jones, who had grabbed his own miss from 3-point range. That matched the largest deficit James has ever faced in the regular season, since a game at Orlando on April 3, 2009.

Butler had plenty to do with that, contributing nine assists and eight rebounds before resting during the fourth quarter, too. The Wolves led 69-42 at halftime, matching their largest first-half score from just two nights ago, after a rainbow 3-pointer from the top of the key by Butler brought the fans to their feet. That also tied the most points allowed by the Cavs in a half this season.

Butler made sure the Wolves didn't slip after the break, knocking down a mid-range fadeaway, stealing the ball back and then swishing a pull-up 3-pointer on the other end to push the lead to 31 points early in the third quarter.

Jeff Green scored 22 points off the bench to lead the Cavs, who've lost six of their last nine.

The only time the Timberwolves have made the playoffs during the reign of King James was in 2004, his rookie year, when they went all the way to the Western Conference finals. James and the Cavs lost here in his second season, too, but that was it until now. In many of those annual visits, too, he barely had to break a sweat.

This is a different pack of Wolves, though, with the arrival of the tough-minded veterans Butler, Gibson and Jamal Crawford to join the still-developing stars Towns and Wiggins.

Neither team could've seen this outcome coming, though.

Kevin Love, J.R. Smith and Isaiah Thomas, three-fifths of the starting five, were a combined 0 for 18 from the field in the first half. Thomas was ejected in the third quarter for a flagrant-two foul on Wiggins, for clotheslining him in the jaw as he drove to the basket. This was Thomas' third game back from the hip injury that kept him out until the new year, having rested once. He had nine points in 19 minutes.

Timberwolves: After shooting 52 percent from the field, the Wolves improved to 12-2 when making at least half their shots.

James chased down Jones to swat his fast-break layup attempt into the seats in the second quarter, following with a stare-down and some barbs traded with Aaron Brooks on the Wolves bench.

Jones got his revenge a little later in the same period on a similar play, throwing down a dunk just in time before James arrived to try for another block. That was just the second career dunk for Jones, whose first was last week.

The game marked the fourth consecutive sellout of Target Center for the Timberwolves, their longest streak in nearly five years. Love, who was traded to the Cavs for Wiggins four seasons ago, was the recipient of several rounds of boos in the first quarter.

Cavaliers: Play at Toronto on Thursday, the fourth stop on a five-game trip.

Timberwolves: Face Oklahoma City on Wednesday in the third contest of a five-game homestand.