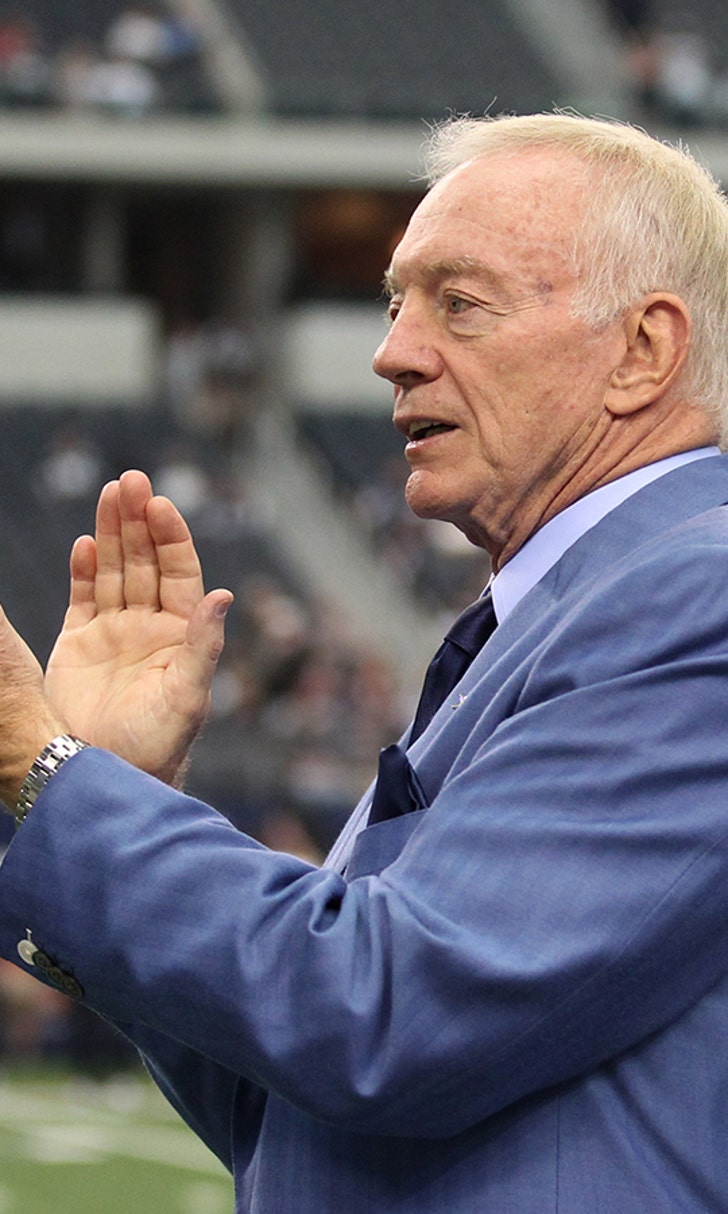 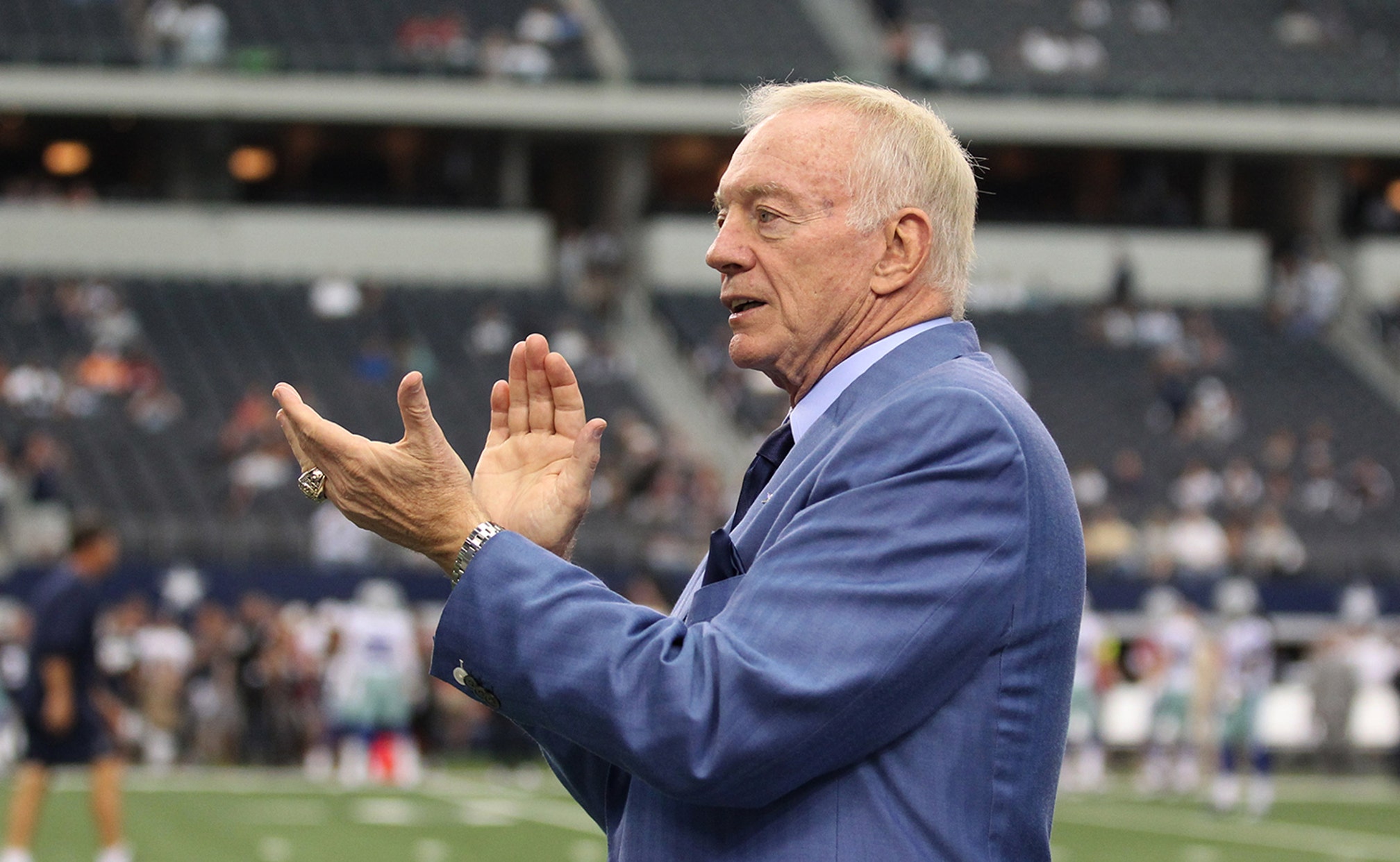 Things only a Cowboys fan would understand 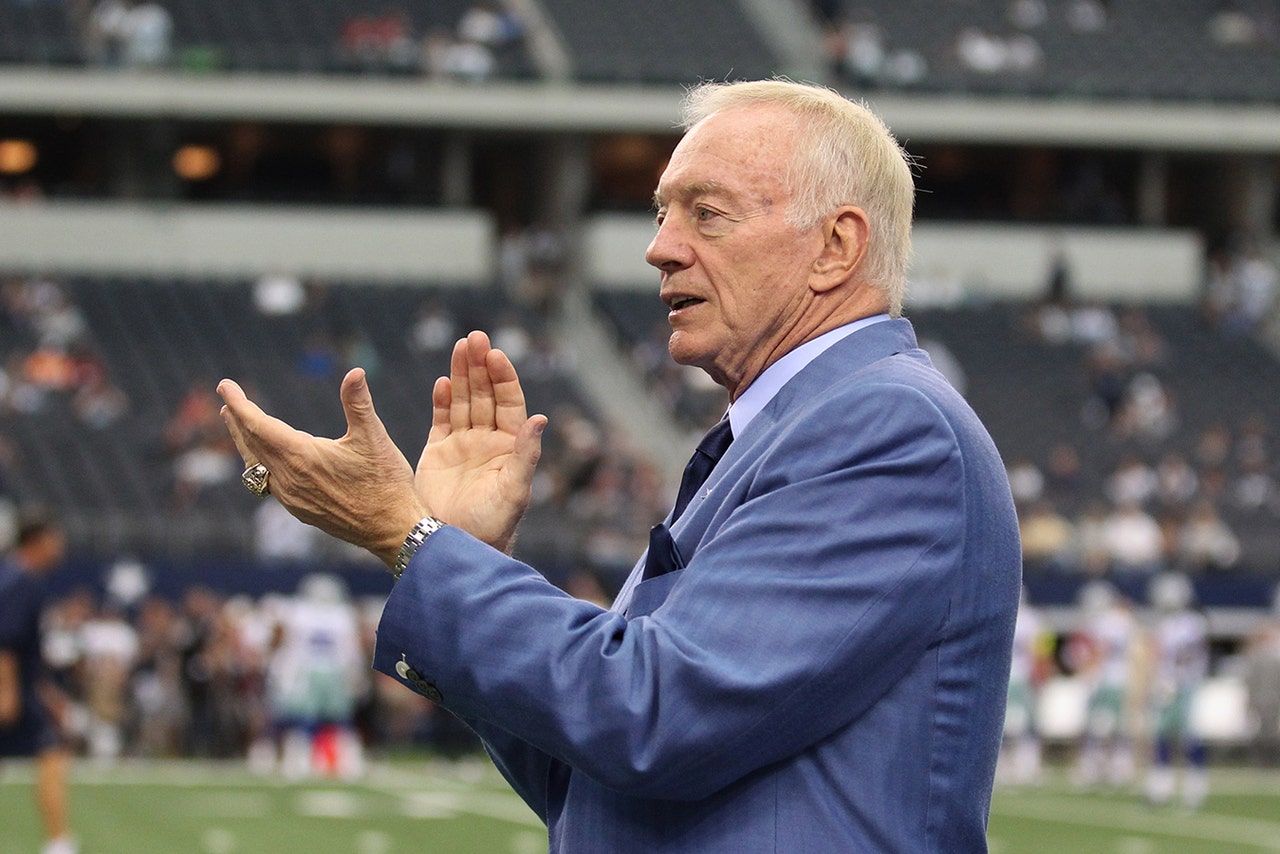 It isn't easy being a Dallas Cowboys fan these days. With only one playoff win in the last 17 seasons, those five Super Bowl wins are starting to feel like ancient history.

Fortunately, you're not alone. The Cowboys still have a huge national following that is the envy of most teams. Television ratings spike when the Cowboys are on national television. The Cowboys always have a large contingent in the stands when they go on the road. Cowboys merchandise continues to fly off the shelves.

But there's more to being a Cowboys than simply wearing blue and silver and cheering on the team. Being a Cowboys fan means being part of a culture, a tradition, a shared knowledge.

Only a Cowboys fan would understand that...

TOP 10 THINGS ONLY A COWBOYS FAN WOULD UNDERSTAND

1. Blue jerseys are a jinx

Back in the 1960s, team president Tex Schramm decided that the Cowboys would wear white jerseys at home, so that fans could see the different colors of the visiting team. It didn't hurt that white is cooler to wear in the Texas heat. 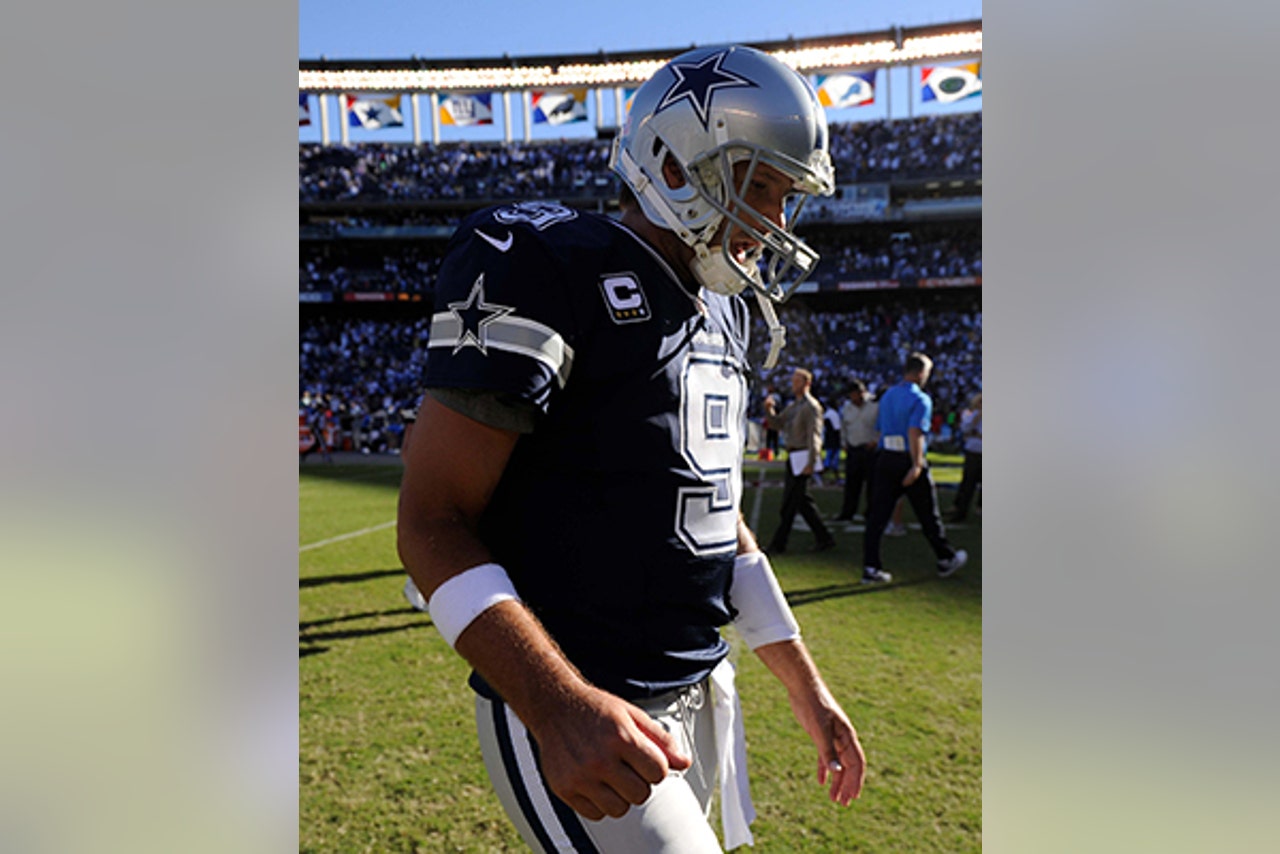 Nowadays, the Cowboys only wear blue when a road opponent, usually an NFC East team trying to throw them off, forces them to. The one exception is the annual Thanksgiving game when the team will wear a throwback version of their original blue jerseys with white raglan sleeves.

However, it created a minor stir last Thanksgiving when, because of a sudden NFL rule change, the Cowboys were required to wear their normal blue jerseys at home for the first time since their Cotton Bowl days. The Cowboys managed to overcome the jinx and beat the Raiders, 31-24, although superstitious fans were given pause when Dallas fumbled the opening kickoff and saw it returned for a touchdown.

2. We invented The Hail Mary

The term "Hail Mary" has become common across sports for any last-second, desperation attempt to win. But it originates from a 1975 playoff game when, with 32 seconds left, Roger Staubach threw a 50-yard bomb to Drew Pearson to beat the Vikings, 17-14.

Staubach was knocked to the ground and never saw the catch. After the game Staubach, a good Catholic boy, told reporters: "I closed my eyes and said a Hail Mary."

3. The asthma field is over there

Cowboys fans knew the days of the stone-faced, unemotional Tom Landry were over when television cameras caught one of the first workouts under Jimmy Johnson in 1989. As Johnson was running the players through conditioning drills, he noticed one of the kickers walking on the side.

"You have asthma?" He barked at the poor, anonymous kicker, and pointed to the parking lot. "Get your [bleep] over to the asthma field and have some asthma! The asthma field is over there!"

4. We know not to ask when Jerry Jones will hire a "real football man"

The most tired question in all of Dallas sports is: "When will Jerry The Owner fire Jerry The GM?"

It's a twist on the fact that Jones, who made his first fortune in oil and gas exploration, is both owner and GM. But the question has been asked so many times, by fans and media alike, it's ceased being clever. It's more like a broken record.

Jones has repeatedly stated â in between filming commercials, schmoozing VIPs and negotiating marketing deals â that no one else is going to run the team as long as he's the owner, despite annual pleas for him to step aside. Most media and fans have accepted that it's a question not worth asking anymore, but there's a reason Jones no longer takes calls from fans on his weekly radio show.

5. Herschel Walker should be the MVP of three Super Bowls

One reason Jones won't step down is that he can point to the three Super Bowls won during his tenure. Those three Lombardi Trophies might be sitting elsewhere if not for the daring trade of star running back Herschel Walker during the 1989 season.

It was the biggest trade in NFL history and maybe the most lopsided. The trade netted the Cowboys five players and eight draft picks that the club used to build a dynasty. Two of the picks resulted in the drafting of Hall of Fame running back Emmitt Smith and All-Pro safety Darren Woodson.

6. Don't Mess With The Star

In the early days of Texas Stadium, the NFL shield logo was painted in the center of the field. When the Cowboys' star replaced the NFL logo, no one thought much of it until Sept. 24, 2000 when safety George Teague forever became a Cowboys hero. On that day, 49ers receiver Terrell Owens (who later became a Cowboy) stunned everyone by celebrating a touchdown in the middle of the star.

The second time Owens scored and ran to the star, Teague knocked Owens on his popcorn bucket. Later, Emmitt Smith scored and firmly placed the football on the star, as if reclaiming a sacred land.

7. The identity of The Mad Bomber

Thanksgiving Day 1974 looked to a dark one with Roger Staubach, aka Captain Comeback, knocked out of the game and the hated Redskins leading, 16-3. Then an unknown backup named Clint Longley started flinging touchdown passes. Longley threw a 35-yarder to Billy Joe Dupree and a final 50-yarder to Drew Pearson for a 24-23 win.

Longley never had much of a career after that, and later became infamous for sucker-punching Staubach. His current whereabouts are unknown, but he will forever be known as The Mad Bomber for that Thanksgiving comeback.

It's just too painful.

Of the Cowboys' three Super Bowl losses, the 35-31 loss to the Steelers is by far the most painful.

Super Bowl V (16-13, Colts) was a Blunder Bowl and the team's first time in the big game. Super Bowl X (21-17, Steelers) was the Dirty Dozen rookies (including Randy White and Hollywood Henderson) against the reigning champs.

But Super Bowl XIII featured the Cowboys and Steelers in their prime in a battle to determine The Team of the Seventies. Longtime Cowboys fans are still haunted by the questionable interference call on Benny Barnes, the "block" provided by a referee that sprung Franco Harris for a touchdown and the infamous drop in the end zone by tight end Jackie Smith ("The sickest man in America" as a sympathetic Cowboys play-by-play man Verne Lundquist described him).

9. Why we pray to the Sky Mirror

As if AT&T Stadium doesn't have enough to capture the eye, last fall the Cowboys unveiled a mysterious, 35-foot concave mirror on the east side of the of stadium grounds. Sure, everyone knows about the 160-foot wide video board hanging over the field, but what's this mirror thing?

Turns out it's another in the many pieces of art that are displayed throughout the stadium. The stadium's art collection is the pride and joy of Gene Jones, wife of Jerry, whose desire was to make the $1.3 billion AT&T Stadium a cultural center and not just a sports facility.

Sky Mirror weighs 23 tons and cost an estimated $10 million, plus another $3 million for the granite fountain that serves as its base.

Fans have taken to gazing at the Sky Mirror before games, perhaps in hopes of divine guidance for a victory.

So far Sky Mirror hasn't provided any mystical benefits to the team (that we can prove) but diehard Cowboys fans know its real power: Every time a national TV crew comes to town, at least one commercial break segment is devoted to the stadium's art collection.

10. Why the Cowboys are America's Team -- and your team isn't

Although it's been a while since the Cowboys have ruled the NFL, they still get tagged with the America's Team nickname for good and bad.

It started when NFL Films noticed how popular the Cowboys were and decided to call team's 1978 highlight film "America's Team." Tom Landry wasn't in favor of it, but team president and ace promoter Tex Schramm loved it.

Since then, the nickname has been used derogatively against the Cowboys, while other teams in other sports have tried to lay claim to it. But the numbers don't lie: the Cowboys are still one of the most popular teams on the planet.

The Cowboys continue to attract large followings on the road, draw big ratings and sell tons of merchandise. Some teams have taken steps to thwart the invasion Cowboys fans when The 'Boys come to their stadiums.

Thanks to Jerry Jones' marketing savvy, the Cowboys have enlarged their brand without the benefit of a Super Bowl win. AT&T is instantly recognizable as one world's best sports facilities. The team annually lands at or near the top of the Forbes list of the worlds' most valuable franchises.

To remain this popular and influential for decades, a team must have something going for it besides the product on the field. Players and coaches come and go, but Cowboys fans remain true forever.